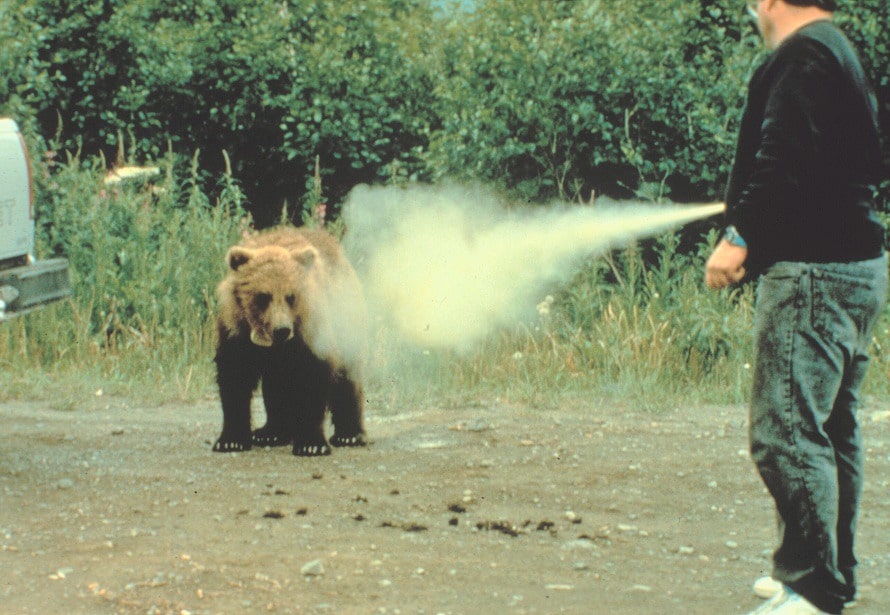 Although usually, a walk in the forest can be less dangerous than a stroll to the supermarket, you should be aware and prepared. You are entering the habitat of wild animals– they usually fear and avoid humans, but they will guard their grounds and they don’t necessarily expect your presence in their territory.

While knowledge of the laws of instinct that govern the wilderness is always your best defense, pepper spray is a good defense method you can choose for your protection when it comes to deterring wild animals attacks. So, here’s how to use pepper spray, though hopefully, you won’t ever have to.

Why Choose Pepper Spray in The First Place?

Or maybe for starters, it would be more appropriate to ask yourself why to carry any weapon when your sole purpose is to explore and enjoy nature as it is, to re-integrate this complex but still very familiar realm and re-animate your own wilderness.

It may be because we’ve lost touch with that part of ourselves and this puts us in a vulnerable position, we’ve been living in an over-protect medium for so long that our instincts have faded – sometimes the sound of a squirrel jumping from one branch to another can send shiver down our spines and fear has a very recognizable odor for wild creatures. It is this kind of signal that you don’t want to emit. 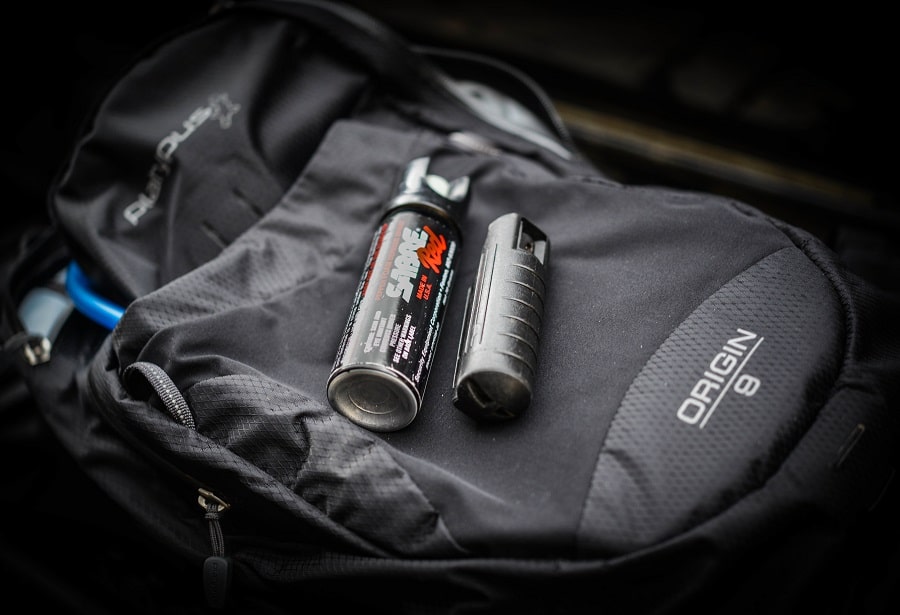 It seems that your simple presence in a completely natural area can be dangerous, so purely from a psychological point of view, carrying a weapon on yourself will keep you safer as it will reinforce your self-trust considerably.

After all it is a known fact that even dogs sense it – you bike regularly on a street populated with stray dogs and they bark and hit on you every time, but once you’ve armed with a spray or a simple harmless dazer, they keep away and don’t even mind the maddening effect of the spinning wheels.

Not only that pepper spray is the kind of weapon you can use with a minimum or no training at all (though it is recommended to try it at least once before getting yourself in a situation when properly using it could decide your life safety – as you’ll read further you’ll understand that knowing a few but basic aspects of its functionality is of vital importance) but pepper spray has proven to be more effective than almost any other weapon.

You may wonder how this can be, considering the force and efficacy of guns for example. How can such a small object, that almost resembles a toy, compete with the blistering effect of the iron and the terrifying blast that propels it? Well, in terms of wounding the animal, it can’t.

But wounding the animal is not something you desire in the life-or-death situation of an assault, this can trigger a more violent and erratic behavior because for both of you it’s all about survival in those moments.

Therefore simply forestalling the animal’s attack, discouraging it or just delaying it, is the best strategy that can guarantee you at least time to take refuge if not scaring away the animal for good.

Though it’s only a temporary effect, the shock that a wild animal receives when pepper sprayed is immense, mainly because its olfactory system is many times more sensitive than our own, so you can only imagine the trauma that you can provoke, the paralyzing state that the loss of its primary survival senses, sight and smell, can generate.

There have been numerous researches done on the effectiveness of pepper spray, a lot of them in USA alone, most of them in regards to bear attacks and in more than 90% of the cases everything ended with the human and the animal walking out of the encounter alive and with few if none injuries.

What Does Pepper Spray Contain and Which Type to Use Against Wild Animals?

The main ingredient in pepper spray is oleoresin capsicum, oil extracted from cayenne peppers. Even though maybe you’ve been lucky enough not to experience this kind of scathing steam on your own skin, you still have to be familiar with the incredible burning sensation of peppers whether on your throat or just on your fingers.

Remember it and you can imagine the damage degree than a concentrated solution of this compound, can produce.

You will want to be sure to buy the one that explicitly says bear use – these ones have a very high concentration of capsaicin and they also come in generously large recipients. 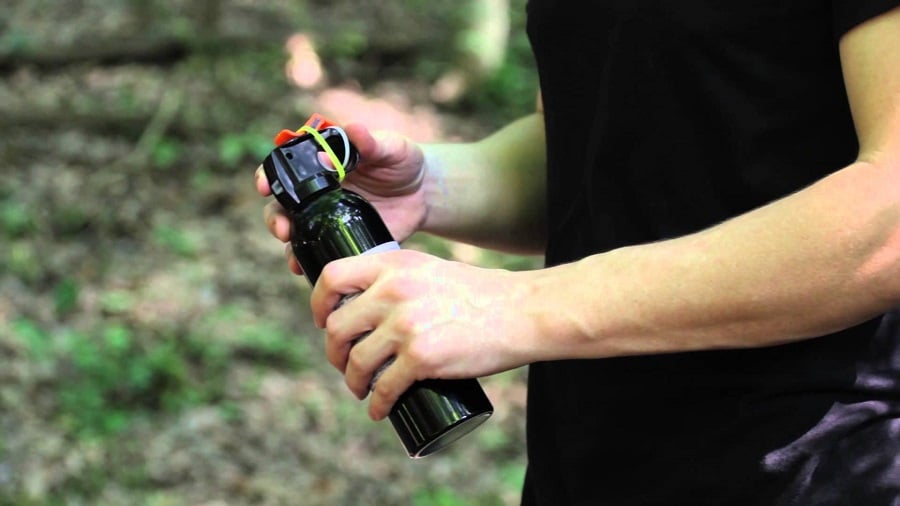 Of course, you can use it against mountain lions, wolves, coyotes or any other animal. The effect is as damaging and there haven’t been any deadly cases registered. Beware though, do not ever use this type of pepper spray on humans and also check the legislation in your country regarding the possession of this type of weapon, you may want to leave it home when wandering the streets of a city.

But how does it work? The spray shoots the atomized substance in the form a dense fog or mist at a distance of 5-9 meters. The moment it reaches the animal’s nose and eyes it immediately causes the mucous membrane to swell, it dilates the capillaries, thus restricts sight and breathing, inducing coughing, chocking, nausea.

What to Do If You Accidentally Spray Yourself

If this unfortunate event happens you’re going to experiment first-hand what a bear would feel if sprayed by you. Although it could be a useful learning experience (and from what I see there are a lot of ‘brave’ stuntmen out there that would try it at home just to see what happens), it’s not at all mandatory so you should always pay attention when you grab the can to which way the cap is directed towards. 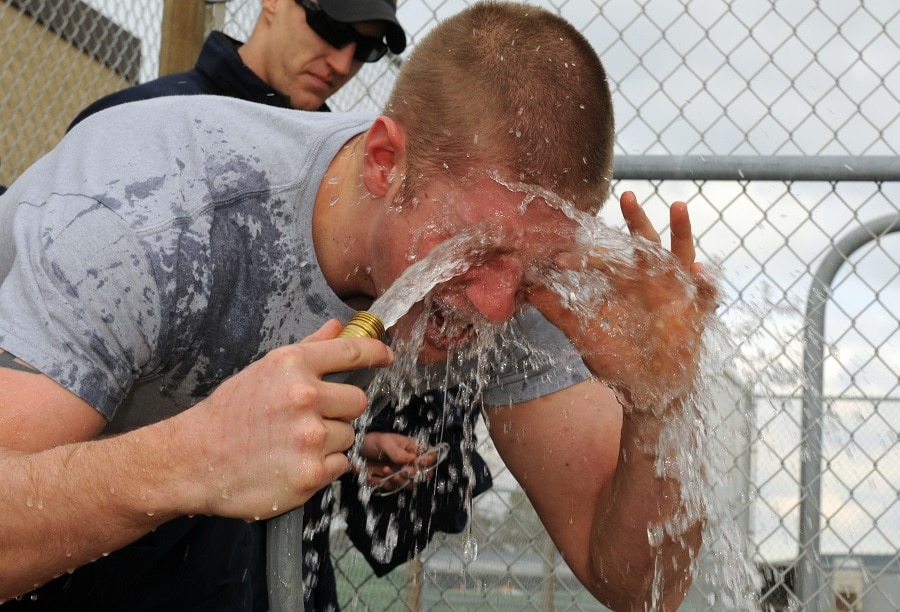 Accidents like this happen out of negligence or under stress, which would be totally conceivable in a panic situation hence it’s recommendable to get yourself familiar first and foremost with all the procedures of handling the pepper spray and with the can itself – grab it and hold it in your hands a couple of times just to get the feeling of it, this way it’ll come easier if you need to use it for real.

Easier said than done, but if the worst happens, try to be patient – all the effects will go away. I know it will seem like a lifetime to you but it will only take between half an hour to a couple of hours till you’ll recover and feel fresh again.

! If you have asthma or other breathing condition it’s best to seek medical help !

In Short, What You Should Keep in Mind

Pepper spray is a weapon and in consequence you have to treat it accordingly, with care and awareness; especially the type of spray used for protection against wild animals because it is many times more powerful, you can’t fool around with it like school children making a stupid joke in the classroom, its effects can be very traumatizing.

Always assess the context in order to judge correctly if it’s safer to use it or not – in some cases it can aggravate the situation and instead of saving your skin, can ultimately bruise it or worse. Sometimes the conditions might hinder the desired effect, other times it can trigger more aggressiveness from the animal and put you in more danger. 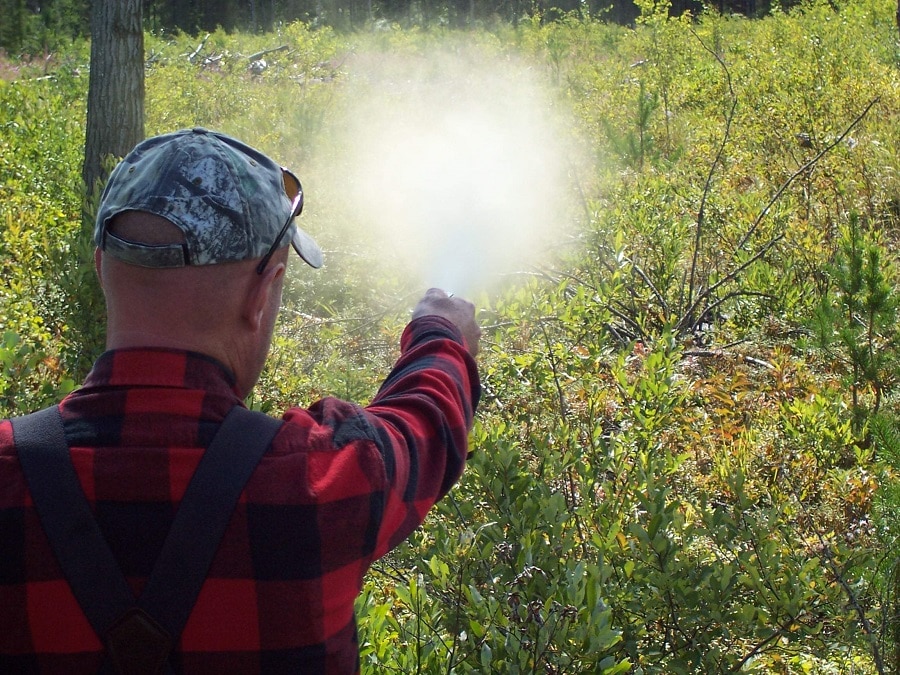 You should also be aware of the wild area you are exploring and the animals that populate it. Different animals have different approaches – the most casual encounters are with bears as they can be more frequently taken by surprise by your presence, wolves or mountain lions have a more sensitive smell and they will feel you from a greater distance.

Learning their behavior and instincts will tell you if they want to attack or just scare you away.

In all cases, fear is what unleashes the animal to charge. In most cases all wild animals will try to avoid meeting humans, even if you’re entering their territory, they are most probably more afraid than you are – exceptional circumstances might make them consider you pray (usually you are a potential enemy) like after long periods of drought when food is scarce.

I know we’re all going in the wilderness for a whole experience, bored of common deer and rabbits that so often can be sighted chewing stuff from our garden or hazardously crossing the road just in front of our cars, wildly fantasizing to see a bear or a wolf in their natural habitat, but it’s always better to be conscious of the jeopardy and prevent encounters for their sake and yours as well.

The true stories do not always have a movie type happy end and after all it’s all about respecting each other on this planet. Their intimacy should not be taken for granted, just like ours. 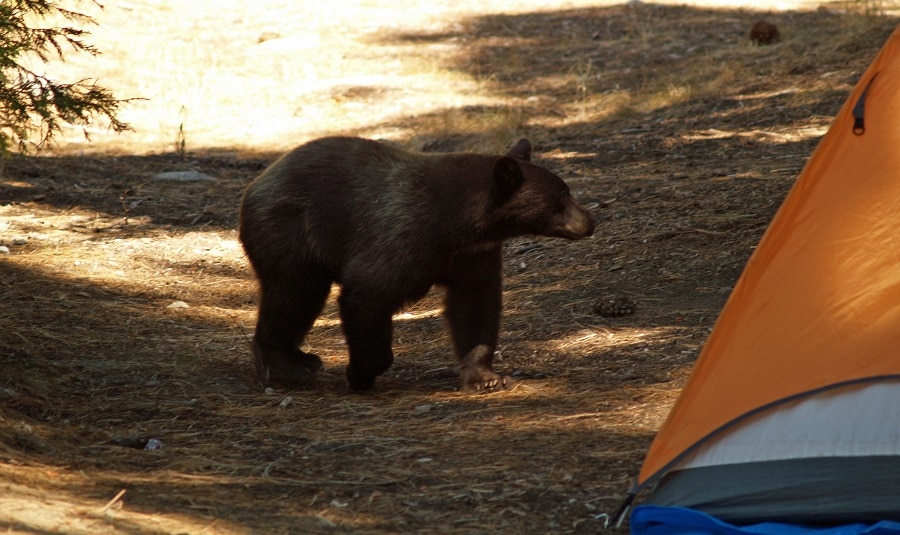 So here are a few extra tips on how to behave among them:

These being said, I wish you safe and pleasant journeys wherever you decide to wander. 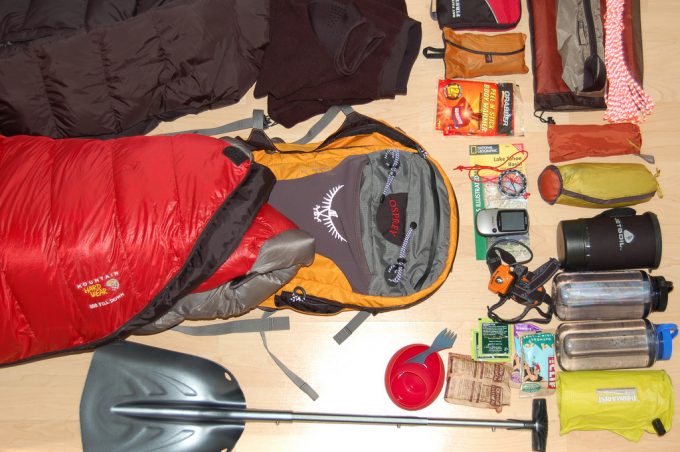 The idea of packing for your next camping trip can be stressful – to say the least!  If you’re…

Walks, hikes, climbs, exploration, sports, adventuring, these are only a few of the things that we do in the… 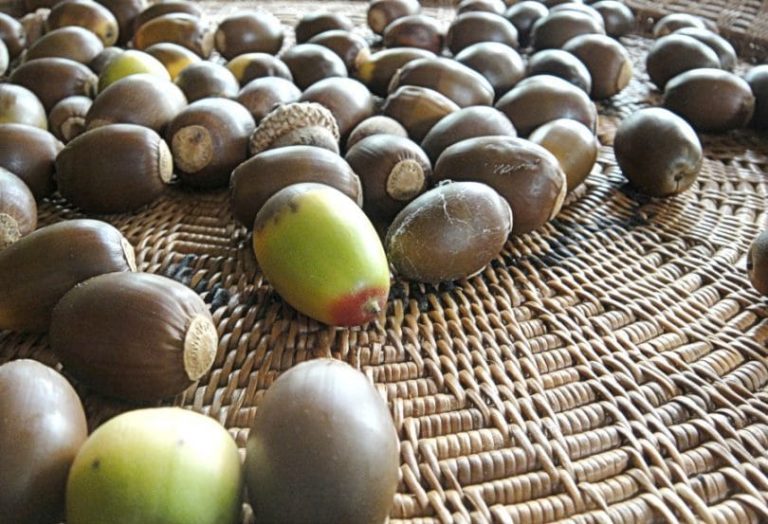 Acorns are a great food item, whether you need it for survival purposes, or you want to eat something… 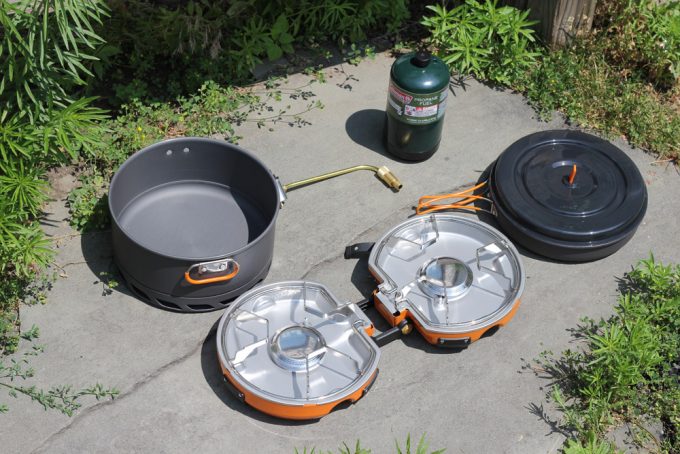 Choosing the right camping stove is something that takes time and research. There are many different makes and models… 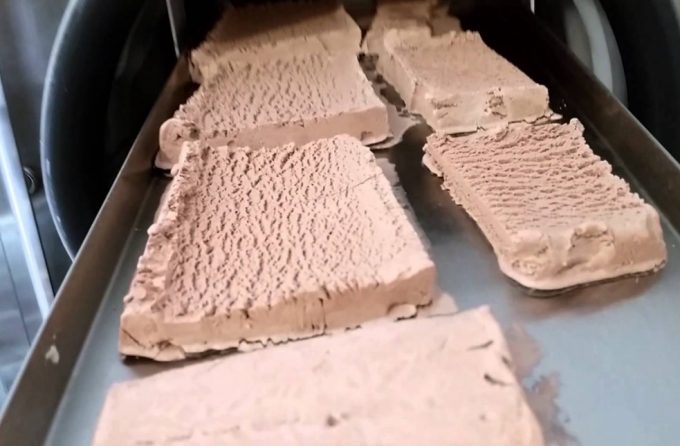 If it’s your first time to go on a multi-day camping or backpacking trip, we’re sure one of the… 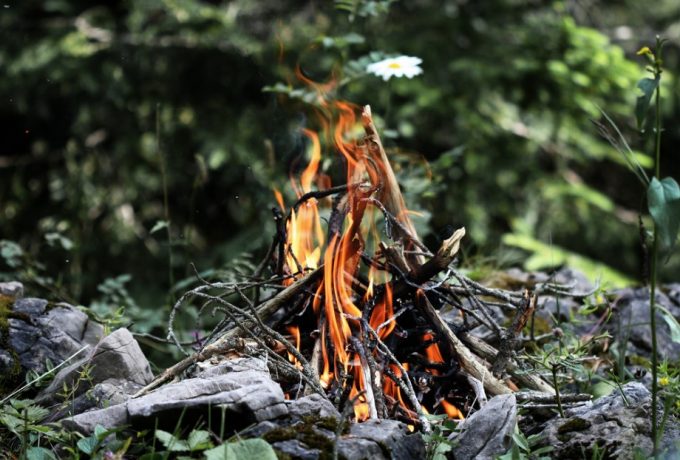 Everyone loves camping, right? Sleeping under the open sky and watching the stars while the only sound around is…