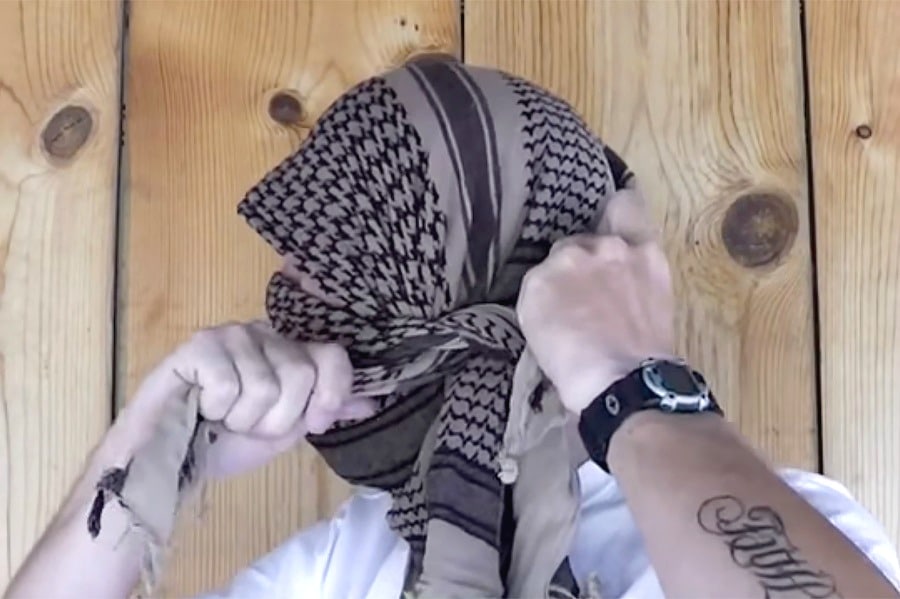 Until recently, women were among the few that knew about the existence, the practicality and versatility of a scarf. They knew they should have many of them in their wardrobe, to match their outfits; they knew how to improvise new clothing out of it, like skirts and dresses; they knew how to handle it whether at a fancy dinner or at the beach.

But ladies, it’s now men’s turn to wear the shemagh. And this is no fashionable accessory to make them more appealing for the wolves in the wilderness, but a tactical scarf that recently became a must-have piece of equipment. As this is no ordinary piece of textile, one should learn how to wear a shemagh.

The shemagh has been a traditional cloth that Arabs have been using for centuries, men as well as women, as hair dress. It is a quintessential symbol for Palestinians, honoring their fight for independence; they call it keffiyeh and make it from wool or cotton dying it in orange, white or black.

It’s called shemagh by Saudi Arabians and Jordanians that make it from cotton but also flax and either keep it simple in a black and white check pattern, either decorate it in vivid colors. The Arabs in western Iraq and the Persian Gulf call it ghutrah and the dwellers of North Africa and Egypt, rezza. 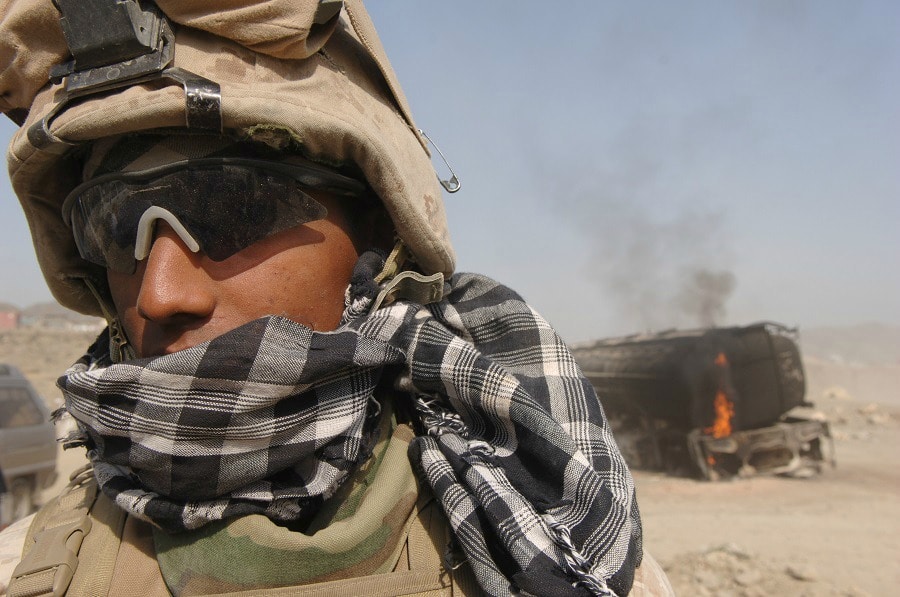 Its primary purpose was to protect them against desert weather conditions, extreme exposure to sunlight and powerful dust winds, which makes it appropriate for its native lands. Proof enough of its effectiveness is the fact that it remains as a cultural stamp of Arab people, that wear it also as a statement wherever they are on Earth.

We might think that the keffiyeh made its way into the worldwide consumer market as other traditional items, indigenous to certain cultures, that were transferred, transformed and integrated throughout the world in the process of globalization. And it might be possible, that it entered the westerners’ consciousness through fashion as another style of the otherwise well-known scarf.

But most probably it’s journey was another one – as in World War II, the British army introduced the shemagh tactical scarf as a standard piece of equipment for its soldiers. Since then, it became irreplaceable and now the USA is providing its own with keffiyeh.

As we have a great variety of products, either technology, special materials or even more simple items, that have been first produced for military use, only to receive their one niche on the market afterward – we cannot help thinking that this is the current course also.

And it is very interesting that the shemagh is premiering and hitting the western market at a moment when the west is fighting its original wearers on their own land. But, after all, the versatility of this utterly simple cloth is what made it a star, to begin with.

The tactical shemagh that you can buy today is still manufactured from woven cotton. It’s pretty heavy, but this makes it also thick enough for protection. And its standard measures are 42×42 inches.

How to Wear A Shemagh

It’s not like I’m going to give you any suggestion like how to keep one end of the scarf hanging loosely lower and the other negligently flinging over your neck, as to give the impression of an impromptu pop up into the wild woods. Don’t, worry, we’re still in tactical survival area. 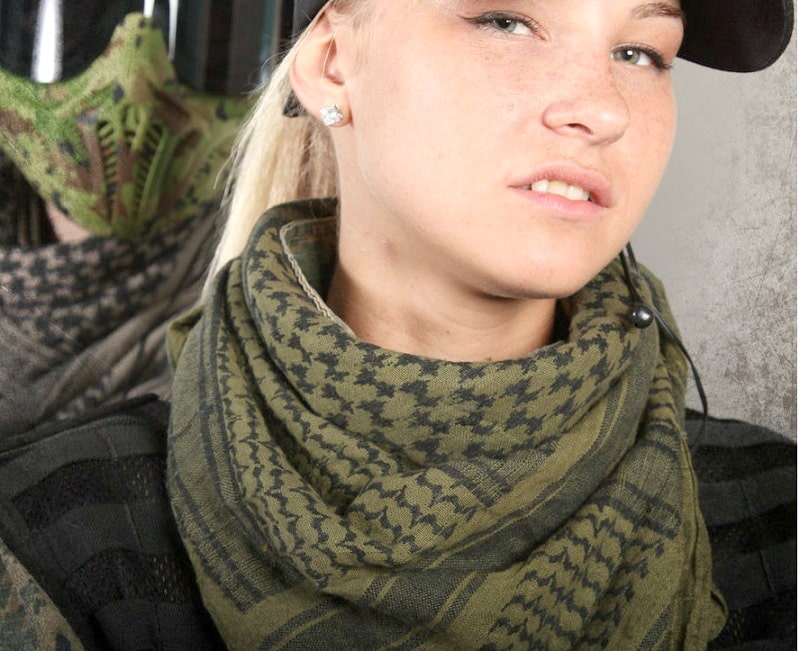 So in case you lose your minds when the wind comes swirling your shemagh around your head (or to prevent such an event for that matter) here are a few tips on how to wrap it well:

But whatever ingenious wrap you find yourself improvising with the shemagh, along with the upper mentioned, remember that its original destination was utterly practical and ultimately symbolical.

So when you wear a shemagh you should do it being aware of its potential, the many ways in which it can support you through your journeys, as well as its collectively infused cultural meaning. Either perpetuated or distorted, the shemagh has undergone such a formidable journey itself, a transition through cults and customs into the free open market so one can say nowadays that you do not wear a shemagh but that the shemagh wears you.

How to Use A Shemagh

This plain square of fabric has a virtually large number of possibilities in which it can be used in the wilderness. And this thanks to its perfect simplicity and to human creativity, wide awake when in need. 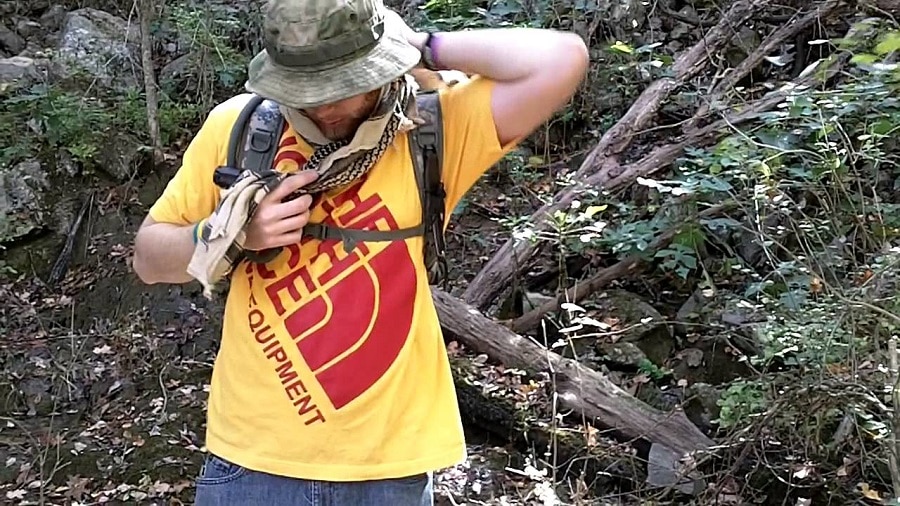 We will go through a number of situations when the shemagh can prove itself, not only useful but sometimes a truly life-saving gear:

These are only a few of the more elementary ways in which the shemagh can become a functional and irreplaceable item from your own gear. 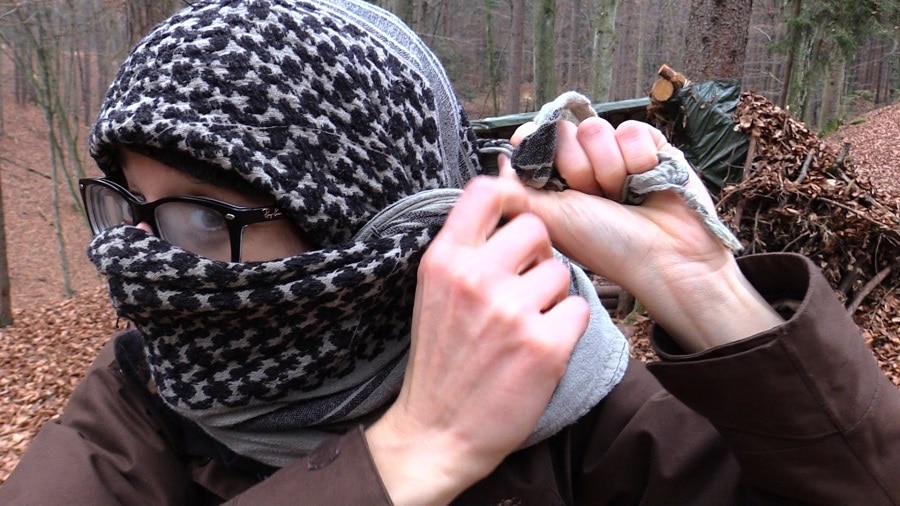 It is practically so easy to be creative with it, that ideas of its usage just come popping into your mind, needless to say, that when the necessity truly comes, the adequate applicable techniques will appear as well.

How to Tie A Keffiyeh

There are so many ways to tie the keffiyeh, each according to the specific utility. If you feel uninspired just ask a lady friend and she’ll show you a dozen of methods in ten minutes time. What we’ll present here is the traditional scheme that creates a full head and face cover-up.

So here are the few steps:

It’s always refreshing when you stumble upon versatile products that can be useful in so numerous ways, that they can actually eliminate a whole series of objects from your gear. It’s almost like a bliss for all travelers that can rightfully appreciate a light luggage and the satisfaction of using the same thing for multiple choruses.

Apparently, the real necessity of people in the past has become the trend of the moment. And amidst the extreme consumerist hype that keeps producing endlessly, never minding the actual needs of its consumers, the release on the market of products like the shemagh is quite an interesting paradox.

Moreover, the culture frame that constituted the inspiration for this product is one that most likely produces anxiety in this historical moment. So borrowing bits of its innate knowledge and wisdom and integrating it, not only in the western lifestyle, but also as a global mass trend, can be a step towards a mutual cultural understanding.

So, when wearing a shemagh, a keffiyeh, a gutrah or a rezza, one carries with him the whole complex historical bundle of inter-cultural exchange as well as appropriation – one so complicated entanglement that in the end is reduced to trend and practicality. 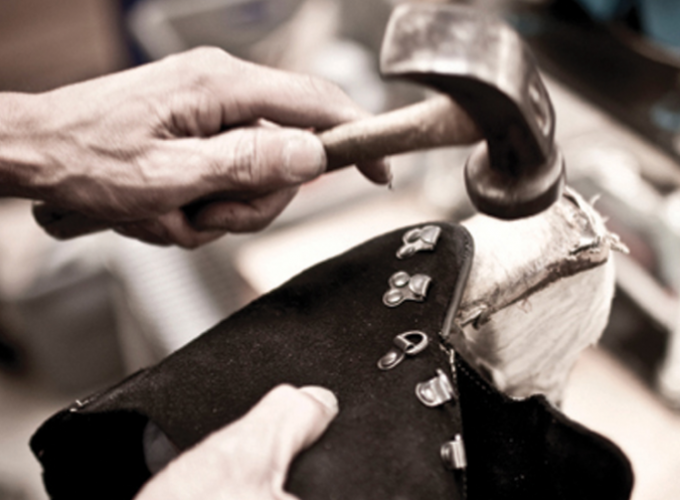 One of the most important aspects of a hike is the footwear that you decide to wear. You will… 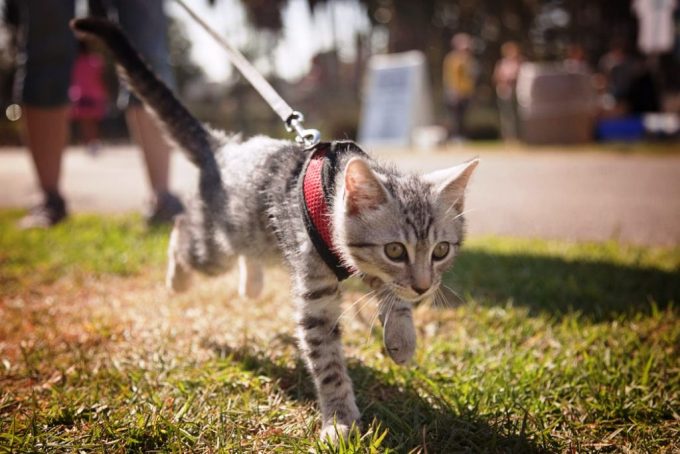 When it comes to hiking, you’ve probably thought about taking your dog with you. However, did you know that… 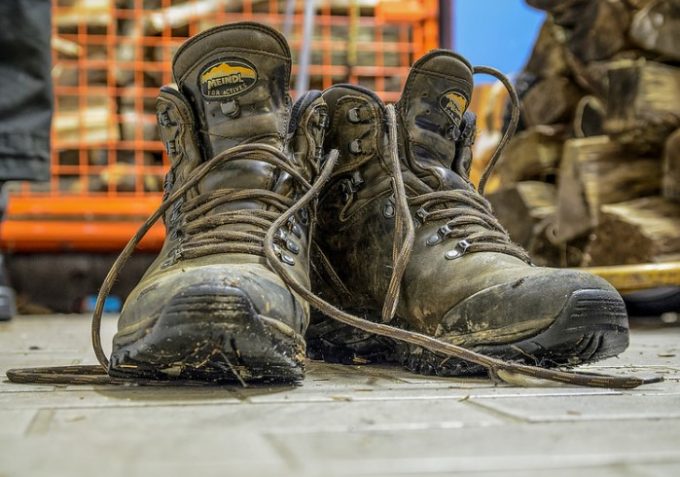 A great pair of hiking boots is essential for anyone who spends any time outdoors. A decent pair will… 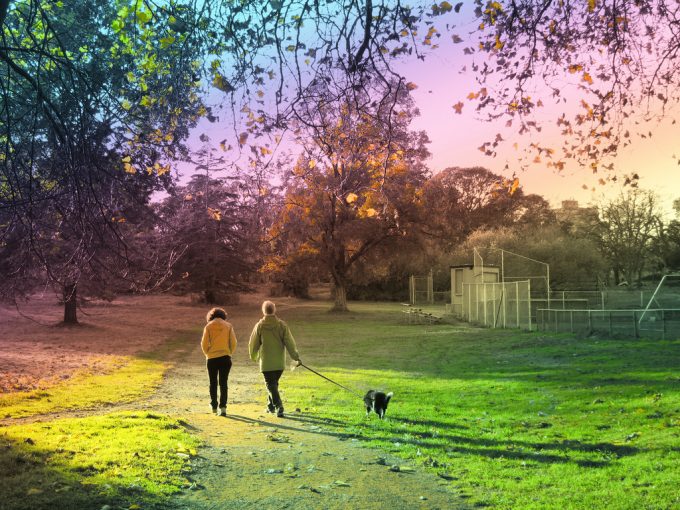 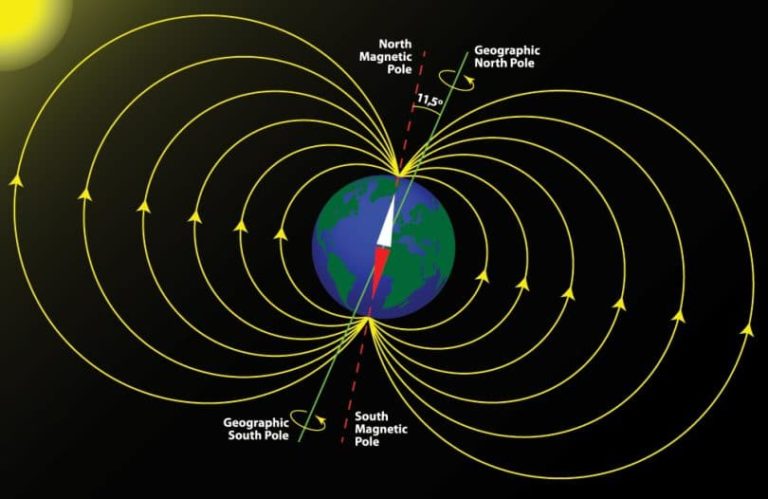 The compass is without a doubt one of the most important inventions of all time. It is a valuable… 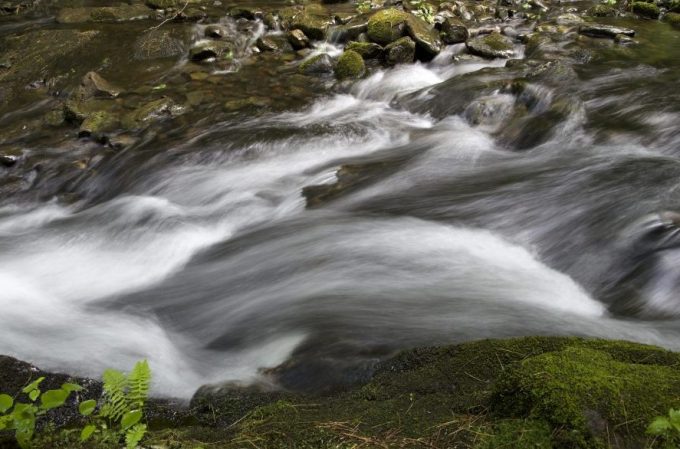 Hiking is a wonderful way to spend your free time, but who doesn’t see a serious challenge when interrupted…