On the drive south from Calgary through perpetual prairie,the drive continues east from Fort MacLeod to a rest and information stop at the Lethbridge Visitor Centre adjacent to the High Level Bridge.

Note: This Visitor Center is no longer at this location.  The new Visitor Centre is larger and improved.

This impressive railroad bridge took 10 months to build and was completed in 1909 by the Canadian Pacific Railway.

High Level Bridge spans the Oldman River Valley where headwaters of the South Saskatchewan Basin drain water from the eastern Slopes of the Canadian Rocky Mountains into Hudson Bay,  2,285 KM (1,420 miles) to the east.

From this location there are 62 KM (39 miles) of hiking, cycling and equestrian trails which lead to a number of local historical attractions and into the spectacular Oldman River Valley.

Continuing south on Hwy 4 through constant prairie under big sky, arrival at the town of Milk River is showcased by the Writing-on-Stone Provincial Park Visitor Centre.

Following a short informational tour of the Visitor Centre the drive continues through the small, rural town of Milk River onto a series of secondary, paved roads heading east.

Forty-four KM (27½ miles) later arrival occurs near the middle of nowhere at the short, gravel entrance road to the Writing-on-Stone Provincial Park with parking near the well-appointed Interpretive Centre. 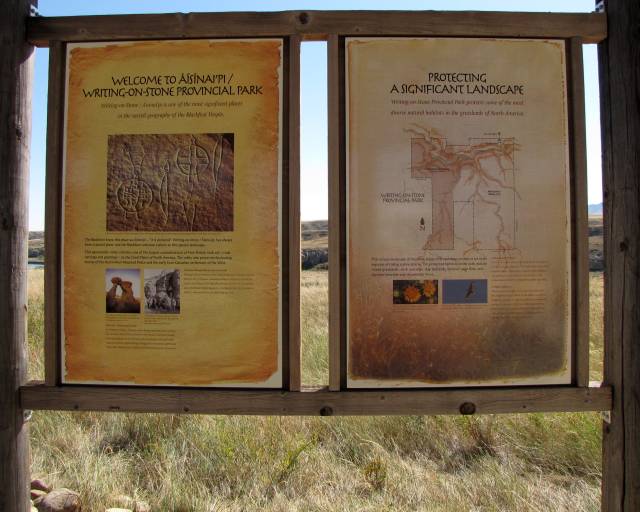 Writing-on Stone Provincial Park is a collaborative effort between the Alberta Provincial Government and the Blackfoot People.

From the campground near the Interpretive Centre, the Hoodoo Interpretive Trail is a 4.4 KM (2¾ mile) return hike to exhibits within the valley.

Just a few steps from the Interpretive Centre it becomes immediately apparent why this valley paradise of hoodoos, clay mounds, and coulees continues to be a spiritual center for the Blackfoot People.

The Native Indians have considered this incredible valley and  major archaeological site in Southern Alberta as a spiritual center for several thousand years.

The drive has been longer than anticipated so afternoon activities must be prioritized and chosen carefully.  The staff at the Interpretive Centre are very helpful and the popular Hoodoo Interpretive Trail will be left for another day.

After lunch the drive west on road above the valley bordering Milk River leads to a trail-head for the Battle Scene.  Some of the ancient carvings, called petroglyphs, in the sandstone cliffs, recognize significant incidents in history.

The Battle Scene is believed to represent the 'Retreat up the Hill' battle fought along the Milk River in 1866.  What remains is a marginally visible, very faint carving in the direct, bright sunlight.  Sadly, it is surrounded by a metal cage to discourage further vandalism. 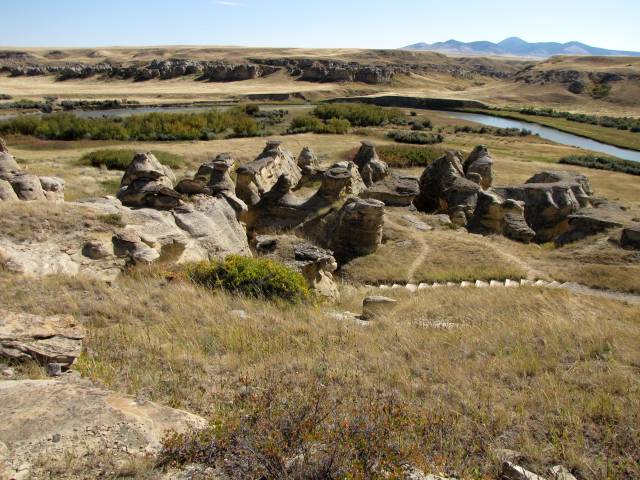 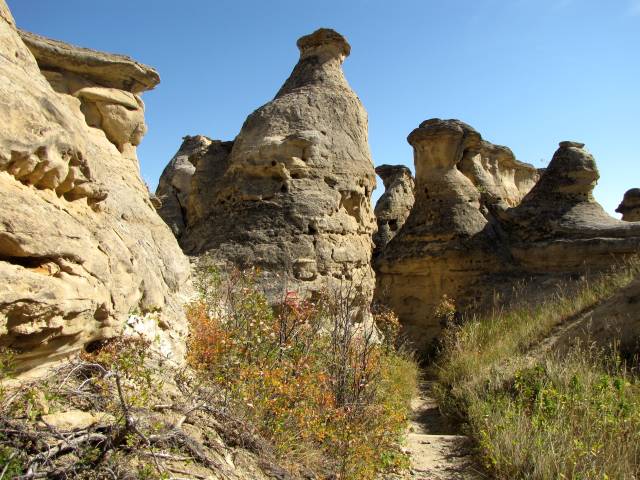 Fascinating trail provides ample opportunity to absorb grand views on the return over the 0.8 KM (½ mile return) Battle Scene trail prior to the short drive back to the Interpretive Centre for the 2 PM tour of the admittance-restricted Archaeological Preserve. 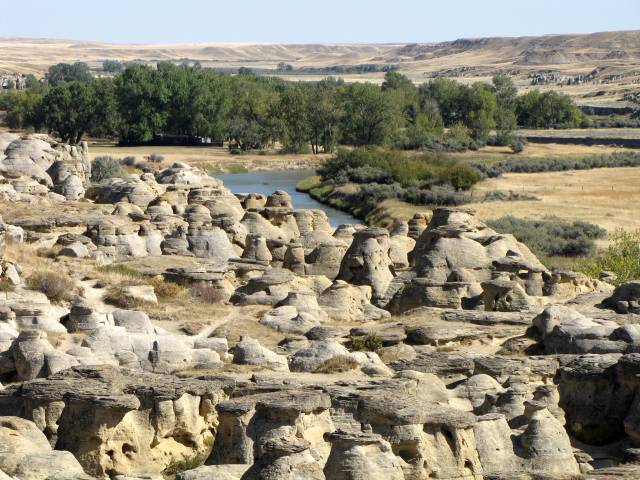 In the off-season, only four people attend the tour conducted by the very competent and knowledgeable guide, Bonnie.

With Bonnie at the helm, an air-conditioned bus takes us through the locked gate, into the protected area, and onto the valley floor to park at the far end of a long sandstone cliff face. 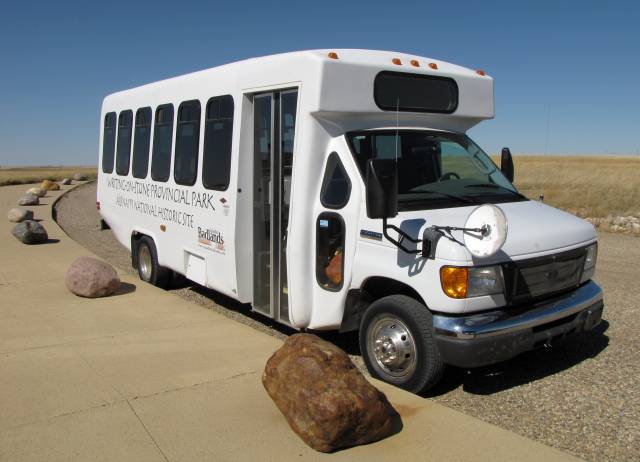 From the bus parking spot there is a long view of table rock near the Van Cleeve Coulee.  Table Rock is a unique hoodoo with two supporting pedestals.

A short trail leads to the cliff face and the trail along the bottom for several exhibits of petroglyphs (carvings) and pictographs (primitive paintings).

At each stop, Bonnie interprets the art and the history of the location with vast knowledge and entertaining repartee.  The temperature reaches 48° C  (118.4 ° F) so protective hats and fluids become very important. 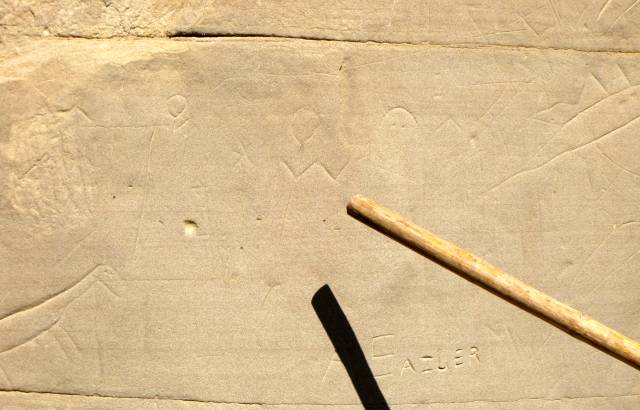 At one stop, the cliff profile displays images in relief.  Can you spot the buffalo head and the beaver?

Proceeding along the path, Bonnie provides interpretation for the wide variety of carvings.  The faint images have been diminished over time by erosion of the soft sandstone.

Pictographs, created with paint made from red ochre, have been compromised by the degradation of some cliff surfaces.  Still, they are many excellent examples of ancient art, and new graffiti has been virtually eliminated by creation of the Preserve, video surveillance and stiff fines for offenders.

Near the middle of our tour along the bottom of the cliff face, the trail position is across from a reconstruction of the North West Mounted Police Post on the other side of the Milk River at the north entrance to Police Coulee linking Alberta, Canada to Montana, USA.

This coulee traveling south across the U.S. border into Montana was used for illegal activity until the N.W.M.P. (North West Mounted Police) installation was established and resident between 1887 and 1918.

In 1889, a small and comfortable two-room log building was constructed for the princely sum of $291.90.  Within the following year a barn, corral, blacksmith shop and two officers' rooms were added to the post.

In May of 1918, Writing-on-Stone Post was no longer needed and all personnel were reallocated to other responsibilities.  The original buildings were destroyed by fire shortly afterwards.

Mule deer, oblivious to our presence, feeding in the lush brush on the other side of the road. 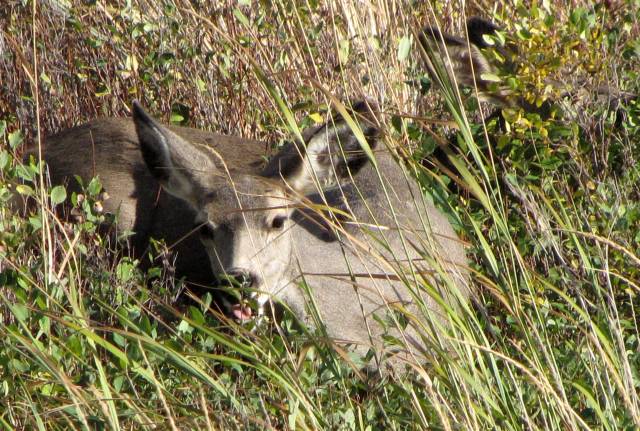 Near the end of the interpretive site there are remnants of nests made by cliff swallows and final petroglyphs before the tour ends and the bus returns to the Writing-on-Stone Interpretive Centre at 4:30 PM.

In hindsight, the return driving time between Calgary and Milk River creates a very long day trip and it would have been nice to explore the Writing-on-Stone Provincial Park more thoroughly at a more leisurely pace.

An excellent three-day trip could include a visit to Head Smashed In Buffalo Jump on the drive south, overnights in the historic town of Milk River and a hike and tour of Writing-on-Stone Provincial Park the following day prior to the 4-hour return drive to Calgary.

Another accommodation alternative could be the well appointed and managed campground at Writing-on-Stone Provincial Park.