The peak is often called Barrier Mountain but this is not correct.  The fire lookout is actually on a high point at the north end of McConnell Ridge.

The summit hosts a little house clearly visible from the TransCanada Highway.  This is the Barrier Lake Fire Lookout.

The drive west from Calgary, under clear skies, turns south at Morley Flats onto Kananaskis Trail (Hwy 40).  Morley Flats surround the Stoney Nakoda Resort at the intersection of Bow Valley with Kananaskis Valley.

Twenty thousand years ago, the front range of the mountains was encased in glacial ice 2,000 ft (610 meters) deep.  The glaciers receded about 10,000 years ago.

McConnell Ridge from the trail-head at Barrier Dam 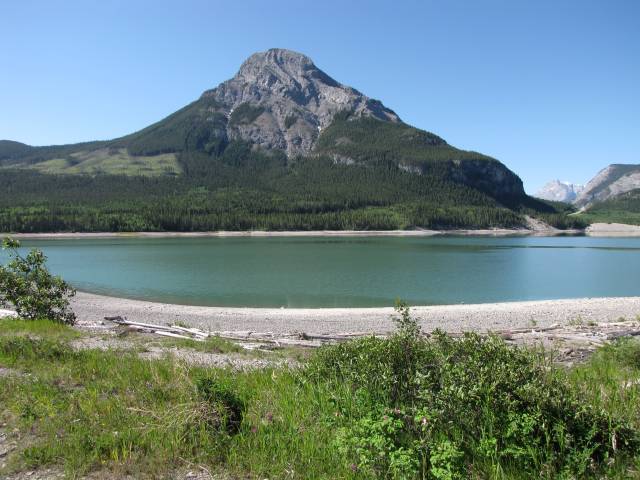 The flat hike across 'S' shaped Barrier Dam heads directly towards McConnell Ridge and offers incredible views of Kananaskis Valley mountains to the south with Mount Baldy rising prominently over the east side of Barrier Lake.

Prior to 1984, Mount Baldy was named Barrier Mountain.  The confusion begins.

The road over the dam veers left through a maze of offshoot roads until a trail sign on the right clearly marks the Prairie View Trail crossing Stoney Trail and leading onto good road over a steady grade on switchbacks to the former site of Pigeon Lookout.

Pigeon Lookout, partway up McConnell Ridge, was replaced by Barrier Lake Lookout at the summit in 1982.

The Pigeon Lookout building resident on McConnell Ridge overlooking Barrier Lake from 1960 to 1982, was returned to near its former location where this building had served as Guard Tower # 8 at the Second World War Prisoner Camp.

Pigeon Lookout never did have anything to do with nearby Pigeon Mountain but it certainly adds to the ongoing confusion. 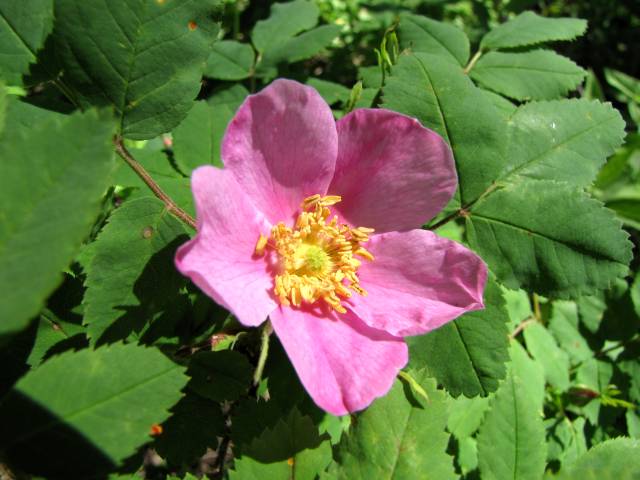 The Wild Rose is the official flower of the Province of Alberta.

The trail levels a bit on the approach to beautiful views over Barrier Lake and Mount Baldy.

Barrier Lake from the location of Pigeon Lookout - Guard House # 8

The view from old Pigeon Lookout down the Kananaskis Valley

The remaining kilometer-long (⅝ mile) trail from Pigeon Lookout to the summit is substantially more rustic with short, steep sections until arrival at the large metal repeating station screen used for bouncing radio signals around corners.

A well-traveled and short diversion offers more amazing views of Barrier Lake, the Bow Valley Corridor and surrounding mountains in the Kananaskis Valley. 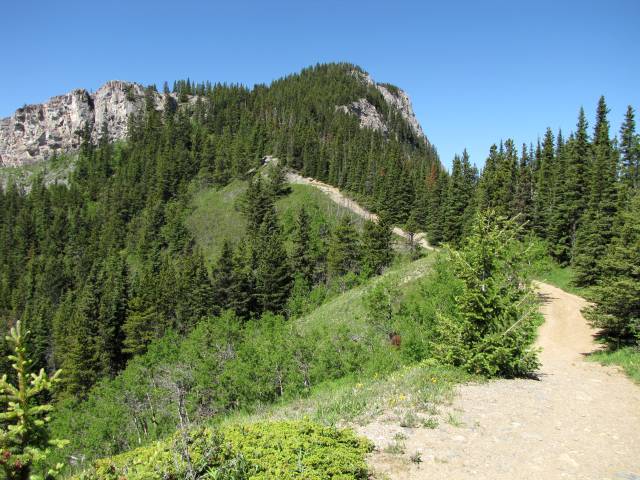 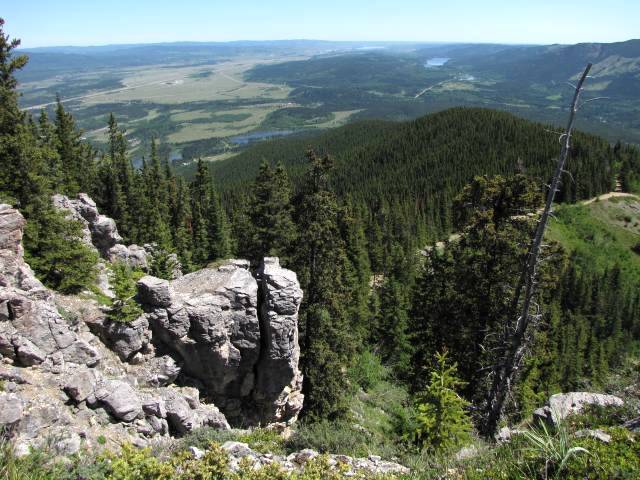 Looking to the east over Morley Flats

A labyrinth of trails beyond the repeating station lead to the summit.  As long as elevation is increasing and there is no threat of falling off either side the objective will be realized. 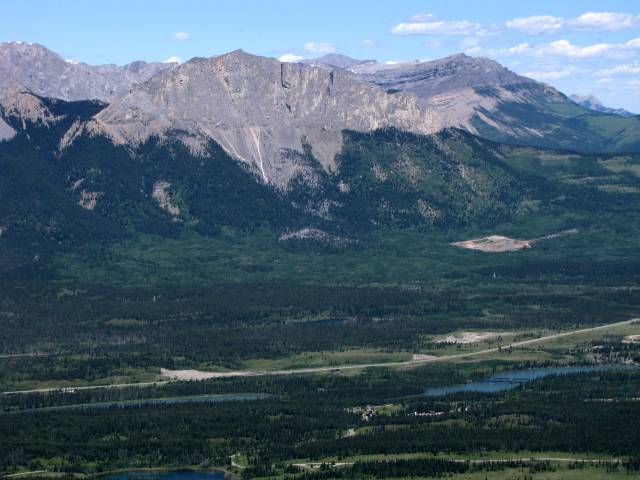 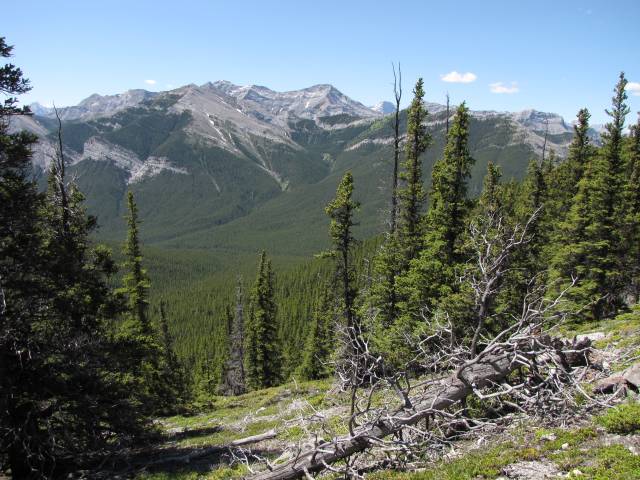 Typical signage announces the proximity of the Barrier Lake Lookout at the 6,550 ft (1,996 m) summit of McConnell Ridge.  A new 700 pound precast concrete picnic table has been airlifted to the left of the helicopter pad at the approach to the lookout.

The long-time custodian, Chip, is out taking measurements and it is courteous to hail him for permission to proceed.  The personnel who staff fire lookouts live and work here for the spring, summer and fall fire season.

The Barrier Lake Lookout has a direct line of sight with the Moose Mountain Fire Lookout, as an example.

There are excellent views here from the top to the Bow Valley Corridor looking towards Grotto Mountain towering above Lac des Arcs, and across to Yamnuska where many rock climbers have learned their craft from experienced instructors.

Yamnuska is also an excellent hike/scramble up the east slope and around the back side.  There are some fascinating features which will leave those who choose to do the hike to the summit with indelible memories.

On the 6.4 km (4.0 mile) retreat via the same route, there are a number of diversion trails to cliff edges which provide outstanding views.

Side trails lead to spectacular views on the return hike via the same route.

From Pigeon Lookout over Barrier Lake, a photo looking down at the location near the Colonel's Cabin and the University of Calgary Field Station shows where the old Pigeon Lookout stands when it was Guard Tower # 8 in memory of past world conflict.

The University of Calgary Field Station on Kananaskis Trail near Barrier Dam where Guard Tower # 8 stands firm in history.

A slight and welcome breeze has come up in the afternoon and back at the Barrier Dam there are kayaks gliding over Barrier Lake on a slight chop which sparkles like diamonds as sun reflects from the surface.

The full switchbacks are used on the way down without short-cutting on the steeper trails.  Using the correct trail will reduce damaging trail erosion and help to preserve the trail for others and also reduce the stress on knees for another day.

As hiking goes, this is an excellent day in every way.