Headwall Lakes, past the south-east flank of Mount Chester, guard the approach to The Fortress in Kananaskis Country, Alberta, Canada. 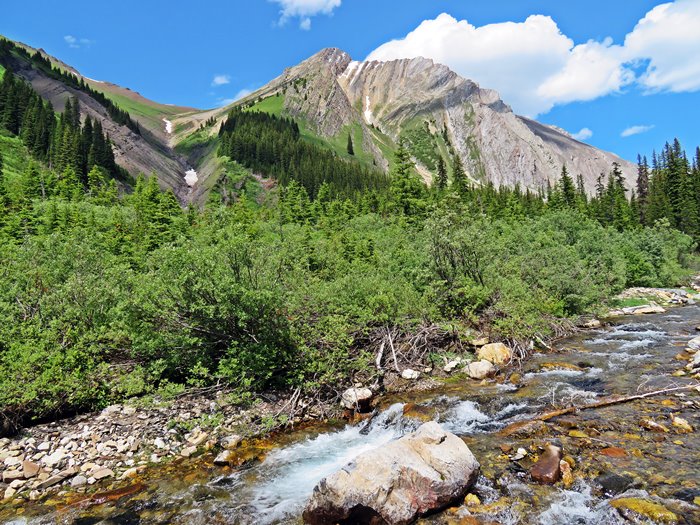 The drive west on the TransCanada Hwy from Calgary, then southeast on Kananaskis Trail (Hwy 40) through Kananaskis Country, branches right on Kananaskis Lakes Road to a right turn at the junction with Smith-Dorrien/Spray Trail (Hwy 742) which heads northwest on poorly maintained road past dramatic Mount Black Prince on the left to Chester Lake parking on the right.

The hike begins near the entrance to Chester parking along old forestry road, used for summer hiking and winter cross country skiing.  The old road is lush with late Spring foliage and wildflowers through rolling land as the day warms up rapidly.  Surrounding vistas are spectacular as the grassy road gradually gains elevation.

The approach trail (road) swings onto a left branch after a kilometer and continues on well defined trail to another left turn heading nearly north to a jog descent to a picturesque wooden bridge over a flood debris bordered river of white water.

A short, easy uphill reveals a very important left turn onto the Headwall Lakes route.  An arrow shape made from stones points the way.

There is a large arrow on the road made from rocks to assist in missing this important turn.  The increasing air temperature and humidity are noticeable.  Forest is lush.  Trail is rugged and twisting through old, aromatic forest and the fresh, earthy aroma pervades challenging trail over wet roots with minor elevation change over varying rustic trail.

Flood damage from the major event in 2013 has modified the trail in some sections as the rugged route proceeds with expansive views of Mount Chester on the left and the dramatic profiles of Mount Inflexible and Mount James Walker to the right.

The rugged trail suits an experienced and well-conditioned hiker with proper footwear.  Vistas are spectacular.

On this unique day, elevation gain is not characteristically providing relief from the hot and muggy conditions.  Mushrooms of many varieties are growing everywhere.

Waterfalls from the outlet of Lower Headwall Lake become visible through the forest ahead. Trail becomes complex over rockfall which has buried the original trail.

Following a longer stretch of hiking over scree, elevation gain in the waterfall area becomes challenging where trail has been obliterated by large scree.  Views back are spectacular and the oppressive heat, combined with challenging terrain combines with time limitations to force a decision to turn back prior to reaching the objective this day.  It is sensible but disappointing.  The heat and complex terrain have been major factors this day.

The hot, sunny day provides spectacular views across the creek's melodic, white water.  The relatively cooler shade of the forest provides relief from the heat.

The return is via the same route used for access.  Although the Upper and Lower Headwall Lakes are not achieved on this day, a future attempt will be made when the uncharacteristic heat is less oppressive.  This hike was a visual extravaganza of post flood conditions along the Headwall lakes Route.