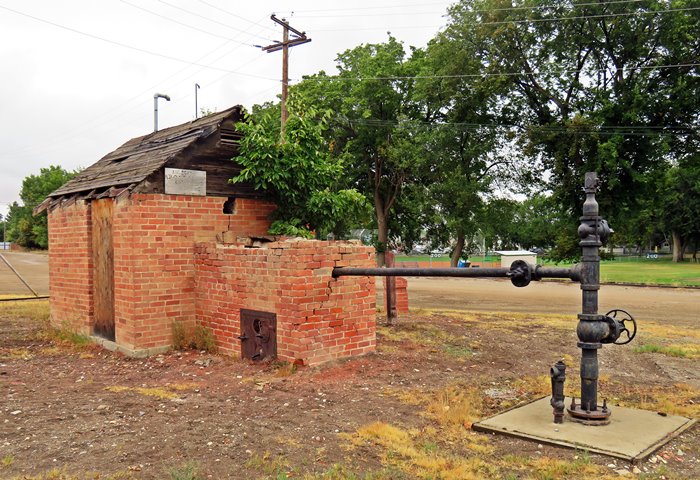 A carefully laid out plan defines the drive from Days Inn along the TransCanada Highway to Medalta in the Historic Clay District of Medicine Hat via Dunmore Road to a series of consistently well-signed turns. Route planning is sensible.

Parking is easy on this drizzly, overcast day and a walk around the exterior periphery of the Medalta Potteries facility reveals a variety of features in various states of disarray and reconstruction.

This random walking tour features a walk to the site of original clay mining further down the road which occurred within large cliffs on the other side of Seven Persons Creek.  Closer to the buildings are the ramshackle remains of past industry showing evidence of ongoing reclamation and restoration.

The artistic sculpture called Medaltarch, created in 1999 by visiting Helena, Montana artist Robert Harrison, leads past a cordoned off and restricted area hosting piles of pottery shards between parking and the main entrance of the museum.

The exterior of the modernized museum features the remarkably well preserved and maintained kilns used more than a century prior to consistently fire the molded clay at internal temperatures near 2,000 degrees F (1,093 degrees C) while surrounded by the extremes of weather conditions common to the Canadian condition.

Four of originally eight kilns are frequently the focal point of local celebrations.

The ramshackle exterior of the historic plant is defied by the development of the old building’s interior where the historic Medalta Potteries site provides the setting for a dynamic and functional museum, an impressive education center, the spacious and the fascinating reception gallery.

Nearby, a 12,000 square foot ceramics studio hosted by The Shaw International Centre for Contemporary Ceramics provides facility and training for developing artists visiting from around the globe.  The art form is a long held and continuing tradition.

Immediately beyond the entrance is a striking display of restored artifacts adjacent to the museum's memorable entrance.  Fascinating tours, at reasonable cost, are available to learn more of the internal workings of the industrial plant.

Operating out of the Shaw Centre, the Medalta International Artists in Residence Program is designed to serve worldwide artists at all stages of their development.  Artists from all over the world bring different experiences, techniques and ideas to the unique studios in the Historic Clay District.

Just a short distance down the road, the well-signed factory for Hycroft China Limited is closed but the historic buildings provide the motivation for a lengthy wander through and around the crumbling features and buildings of a long-past era.

Restoration work is clearly obvious and ongoing as the internals of the factory are recovered.

A walking tour around the plant's exterior reveals a wide variety of remote structure in various stages of decay and reconstruction.  The overall layout provides intuitive insight into the daily functions at the busy plant during its heyday.

Clusters of debris fields, largely overgrown by grassland, offer reminders of past function and glory while an opportune train passing at close range shakes the ground and reverberates sound through the corridors of the old brick complex.

The experience assists in imagining the old plant during it's production years. Old rail which served to deliver materials to, and finished product from the Hycroft plant remains partially visible between the buildings but buried beyond.

Medicine Hat began as a tent city in 1882 with early settlers waiting for Canadian Pacific Railway to continue construction through the region beginning in 1883.

Combined with new efficient transportation access and impressive gas and coal reserves, early growth incentives made Medicine Hat an attractive place to settle.  The burgeoning area became a town in 1899 and a city in 1906.

Silt deposits along the South Saskatchewan River over many centuries created rich clay deposits excellent for making brick and other products fired by the convenient availability of massive gas reserves.  The first brick yard established in 1886 was the beginning of a major growth industry featuring international demand and distribution.

Many of the clay products factories established in Medicine Hat were small businesses but the two large plants initially dominating the industry were Alberta Clay Products and Medicine Hat Brick and Tile.

The well-preserved brick walls also foster a sense of community that has endured beyond past centuries of expansion eventually leading to obsolescence from foreign competition.  The day long firing process became an event which fostered community celebration that became an enduring component of local culture.

Medalta Potteries National Historic Site continues to occupy Medicine Hat’s 61 hectare (51 acre ) clay district only a few kilometers from the current city center. The site was designated as a historic resource in 1985.

Items like crock pots and thunder mugs, which were originally a component of nearly every household, have become collector’s items and antique investment pieces.  At the time, industrial ceramics provided the most scientifically advanced way to store food prior to the availability of refrigeration.

The beehive shaped kilns and their foundations have faced floods, erosion and about 40 years of near 2,000 C temperatures during firing.  Potters and kiln maintenance staff meticulously maintained the massive ovens to sustain the intricate, specialized and lengthy firing process.