The Brooks Aqueduct is a famous and historical irrigation structure east of Brooks, Alberta, Canada. 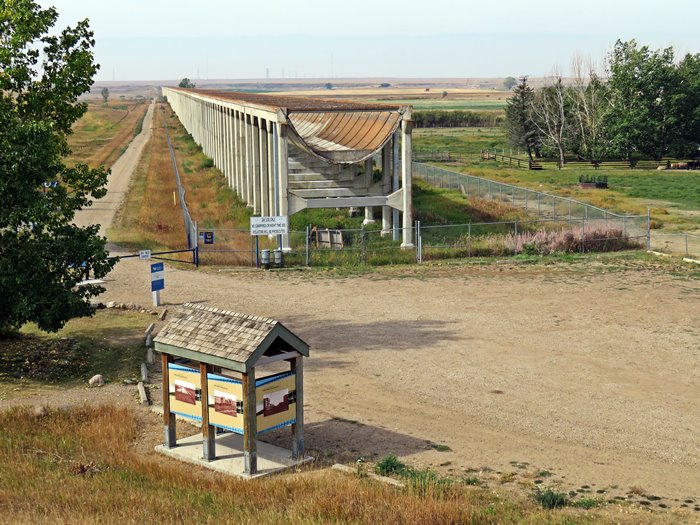 The unique structure was constructed between 1912 and 1914 to expand irrigation in southeast Alberta as part of the Canadian Pacific Railway's irrigation project to span a shallow valley 3.2 KM (2 miles) wide as part of the effort to expand economic value in Western Canada.

The impressive concrete and metal structure stands an average of 20 meters (66 feet) above the floor of the valley and remains in remarkably good condition despite it's age and the ravages of weather, climate and time.  The historic attraction is accessible from Brooks or via the TransCanada Highway east of exits into the city.

Highway access to the Brooks Aqueduct is well signed and the turn south arrives quickly at the entrance to Tillebrook Provincial Park where a right turn provides a paved and well signed route to a final short gravel section leading to the impossible-to-miss, iconic and visibly obvious Brooks Aqueduct.

Summer tourist season tours end in early September on Labor Day.  On this mid September day the abandoned attraction belong to me alone.  It gets no better than this.

Unfortunately the Brooks Aqueduct walking tour interpretive guide is nowhere to be found.

The well-maintained gravel road past the children's playground travels beside the base of the 1,000+ concrete columns supporting the elevated and curved water-transporting flume.

The adjacent gravel road offers a huge opportunity to stretch the legs and enjoy a quick pace along the gravel road which travels between the old and the modern irrigation structures.  This beautifully sunny and dry day makes rapid progress exhilarating.

About halfway along the route travelling west from reception the distinct calls from many species of birds and amphibious life,combined with an isolated area of dense brush, identifies a vibrant wetland full of life.

Shortly past limited views of the large, roadside pond a formal trail-head begins a short, loop-around hike on excellent gravel trail to the far side of the idyllic and noisy pond thriving with life.

Along this short route there are shelters with shade to sit, ponder, enjoy and appreciate the incredible beauty of this natural area.  Informative interpretive signage provides opportunity to increase knowledge.

The west end of the aqueduct is clearly visible from the wetland area.  Return on the wetland trail leaves about one quarter of the hiking distance remaining to achieve the far west end.

Although the aqueduct remains in remarkably good shape, in spite of advancing age, there are periodic signs of decomposition along the way and evidence where past minor breaches have been repaired.

Often, a number on a small sign attached to the chain link border fence, which obviously refers to an entry in the interpretive bulletin, provides incentive to look around and direct attention to unique features along the route.

The minor incline slope ascends to a fenced terminus with views across prairie stretching away to far distant horizons.  Running water in a perpendicular channel intersects with the modern and adjacent irrigation replacement.

The City of Brooks is clearly visible past the broad expanse of adjacent farmland.  The west end of the Brooks Aqueduct is fenced to restrict vandals from entering and damaging the historic structure but close proximity permits interesting photographic views into and along the unique perspective of this historic aqueduct.

The structure remains in remarkably good shape for a weather exposed entity more than a century old.  The sense of history is palpable.

The return hike to the reception facility is a repeat of access in the opposite direction but the hiking day is far from over.

Obvious wooden beam steps ascend from behind the entrance kiosk at the main reception area.  There is plenty more aqueduct on the other side of the road and the perspective is quite different from the edge of the elevated, replacement irrigation channel.

A collection of interpretive boards occupy an interpretive area at roadside near the top of the steps.  Children are best accompanied.  Major and fascinating distractions requires care to be exercised crossing the gravel road.

Investigation of the complex on the other side of the road reveals the walking tour can continue low along the east side of the border fence of from above by hiking the edge of the larger volume, replacement irrigation canal.  On this day, the latter is chosen to provide a different and unique perspective.

This shorter section of the Brooks Aqueduct hosts a fascinating feature at the perpendicular railroad tracks intersecting the structure.  Since the height of train presence needed to remain unlimited, and water is reluctant to flow uphill, an inverse siphon is employed to transport water beneath the railway.

Water is transported by the natural action of siphoning from one side to the other.  The modern replacement uses a similar but less obvious structure.  The modern irrigation canal is interrupted by the railway line and obviously continues flowing along the other side.  Images of further structure are captured with a long lens.

The long lens draws the far terminus of the Brooks Aqueduct closer.  It is an impressive structure which served the economic needs of Alberta for several decades.

All that remains is the hike back on the other side of the modern structure where the view is a largely uninterrupted view across vast expanses of prairie to distant horizons.  The scale is impressive.

An interpretive brochure would have been helpful.  Perhaps, in the future, a smartphone app will be developed to provide commentary for the 20+ interpretive locations within the off season.  Another alternative would be the expansion of interpretive signage.

This is a truly fascinating place where, on this day, the sun is warm, the gentle breeze is refreshing and the depth of historical development and struggle is palpable.

The Brooks Aqueduct is very busy during summer months.

Photographs for the Brooks Aqueduct are captured during the morning of Monday, September 11, 2017 on the east side of the City of Brooks, Alberta, Canada.