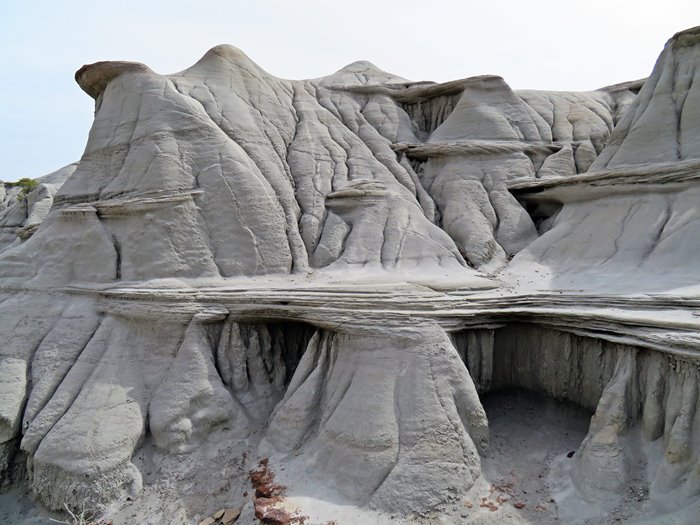 From parking at the Prairie Trail near the entrance flags to Dinosaur Provincial Park at the top of unique and colorful Badlands canyons surrounded by flat prairie fields, the entrance road descends winding pavement to spacious parking adjacent to the seasonal Concession and Convenience Store.

Be cautious of prehistoric predators along the short walk from the main parking area to the modern Visitor Center.  Immediately inside the front doors the information desk and gift shop occupy the area to the left.  Here, tickets can be purchased or picked up for reserved seats on the popular and informative interpretive tour programs.

To the right and in front of Visitor Center a clearly signed trail-head begins the hike to experience the unique and spectacular features and views along the 0.9 KM  (⅝ mile) Coulee Viewpoint Trail.

The good quality trail snakes its way past the side of the Visitor Center to a 'Y' junction where Badlands features often draw hikers to the right for counter-clockwise execution of the short loop.

Within a short distance through spectacular topography, two different and separate sets of steps assist ascent of steep slopes to achieve the ridge top and the incredible valley views beyond.

Erosion over time has altered the placement and angle of metal steps which makes the stride uneven on the ascent.  Being a ballet dancer helps.  Fortunately, I am.  Views into the valley are nothing short of spectacular.  It is worth mentioning this clay based terrain becomes humbling and dangerous when wet.

Extended ridge views unfold as the trail tracks the ridge top before curling around and through dramatic Badlands formations where the route provides multiple exploration opportunities.

What initially seems promising occasionally leads to impassable obstructions adding an element of exploration and mystery to the adventure.

Trail alternatives often lead to options which are supplementary components to the main trail.  The experience can become a maze.

Eventually, trail options converge to return to the back of the Visitor Center.  Even here there are supplementary trail options to adjacent high points which provide overviews of nearby campground areas.

There are hoodoos in various stages of development everywhere throughout Dinosaur Provincial Park.  Along the route between the Visitor Center and main parking, it is important to stay alert for potential threats from prehistoric predators.

Behind the Concession building a pioneer log home dominates the landscape.

John Ware Cabin at Dinosaur Provincial Park honors the latter years of John Ware who was an African-American born into slavery at a South Carolina plantation around 1845.

In 1882, John joined a cattle drive to Montana where he was hired by the North West Cattle Company to escort a herd across the border to the Bar U Ranch, near Calgary, Alberta, Canada.

He earned an excellent reputation for breaking in wild horses while working at several area ranches including the Bar U which is now a National Historic Site.  First Nations people called him "Matoxy Sex Apee Quin" (bad black white man) to recognize his strength and courage.

By 1890, John owned property near Millarville, Alberta.  He married Mildred Jane Lewis in February, 1892 at Calgary's Baptist Church and they raised three sons and two daughters.

In 1900, the Ware family moved from the Calgary area, along with 300 head of cattle, to a spot northeast of Duchess.  John built a modest cabin on the banks of the Red Deer River from spruce logs drifting past from upstream sawmills.

That home was destroyed in the spring flood of 1902 forcing the family to relocate to higher ground overlooking a stream now called Ware Creek.

Sadly, Mildred died of pneumonia In spring 1905 and in September of that same year, John was killed when his horse tripped and fell on him.  His death occurred 12 days after Alberta and Saskatchewan became provinces on September 1, 1905.

By the late 1950s, the John Ware cabin had deteriorated badly. The Brooks Kinsmen Club relocated the cabin to the first location within the park.  Volunteers made repairs and local ranching families furnished it to create a turn-of-the-century setting.

In 1993, the cabin was relocated and repaired again.  The Dinosaur Natural History Association raised funds and combined with funding from Alberta Environmental Protection, the Alberta Historical Resources Foundation and Old Bones Productions of Los Angeles, the cabin and contents were restored again.

In 1998, Parks Canada was chosen to restore the cabin based on their extensive knowledge of repairing historical log structures. The logs were laid and left to dry and shrink for one year.

The spaces between the assembled logs were then filled in using a process called "chinking."  Interpretive displays were refreshed and the cabin reopened to visitors in June 2001 with official unveiling occurring on Parks Day in July 2002.

Historic John Ware Cabin is open for viewing by special appointment as well as weekend afternoons during July and August.

Information obtained and condensed from the Alberta Parks website for Dinosaur Provincial Park.

Photographs for the Coulee Viewpoint Trail were captured at Dinosaur Provincial Park northeast of Brooks, Alberta, Canada on Sunday, September 10, 2017.