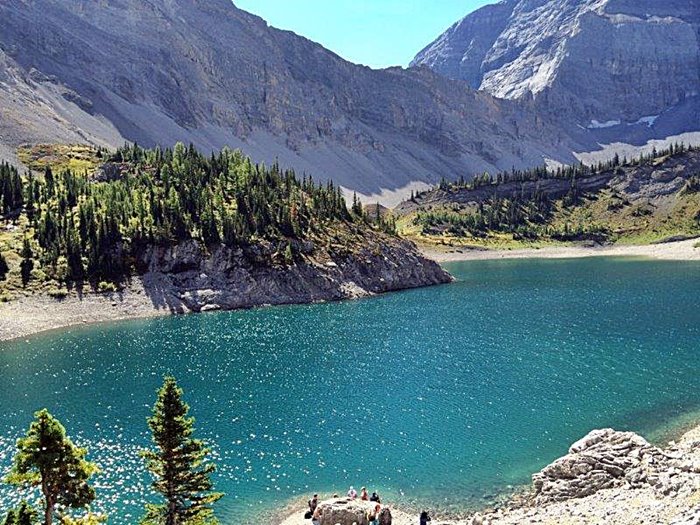 The hike begins with a short descent from the well signed trail-head kiosk into dramatic views of the south end of Mount Kidd prior to arrival at the suspension bridge crossing Kananaskis River.

Significant evidence of the original Galatea Creek Trail and the Terrace Trail was swept away in June, 2013 when major flooding irreparably altered the original course.

Trail crews have worked hard to create new path through and past significant damage.  Sturdy new bridge crossings replace scant evidence of the originals to arrive soon at the signed trail junctions for Terrace Trail heading north to Kananaskis Village and the Galatea Lakes trail heading briefly south and predominantly west to Lillian Lake and beyond to the Lower and Upper Galatea Lakes.

Past 2013 flood damage is extensive.  New routes and bridges weave their way back and forth across Galatea Creek.  Barren rock stands testament to the force of raging water.  Many features buried for centuries have been revealed and occasionally relocated by the force from massive torrents of violent white water.  The natural features are simultaneously humbling and spectacular.

Many new features have been revealed along the course of Galatea Creek.  Following some leisurely and relatively consistent elevation the largely reconstructed trail gains elevation more aggressively for scenic vistas on the right which provide scree access to climbing walls on Mount Kidd prior to a curl and dip in the trail  crossing the first flood-created drainage.

The trail continues through forest on the other side of the drainage.  Some of the flood damage in the substantially widened creek has created immense piles of large, uprooted and badly shattered lumber.  Dangerous bank erosion and tree collapse will continue for several years.

Further along, past another area of flood debris, a cleared area offers relief from sun and heat beside upper levels of Galatea Creek.  A second major drainage is still partially filled with the previous winter's snow prior to another significant and sustained ascent including a new scree covered segment.  A mercifully level section of typical dirt trail begins the final approach to the shoreline of picturesque Lillian Lake.

About a kilometer (⅝ of a mile) prior to arrival at Lillian Lake Backcountry Campground there is an important signpost announcing the Guinn's Pass trail has been decommissioned in lieu of a new alternative constructed between Guinn's Pass and the upper level trail near Galatea Lake # 1.

A quick reconnaissance of the overgrown, decommissioned trail down to the creek reveals the log bridge can be recovered without too much difficulty.

This historic trail and more direct 2 KM (1¼ mile) route to the top of Guinn's Pass will need to be investigated on a future hiking mission with heavier artillery on a subsequent mission.  Perhaps flood damage has rendered the route impassable.

The original Guinn's Pass trail was a fairly rugged avalanche chute prior to the flood but the route offered a more direct and efficient route between Galatea parking and Ribbon Lake.

The new trail is a more lengthy alternative to the old trail but certainly would be an admirable addition creating a world class, scenic loop using the original Guinn's Pass, Galatea Lakes and Lillian Lake trail segments.

A sawn log bridge along the main trail crosses the tiny, picturesque creek to arrive soon at viewpoints along the shoreline of Lillian Lake.

Towards the far end of the small, emerald gem lake, signage directs hikers to campsites, washroom facilities and the 1 KM (⅝ mile) steep, rustic and challenging trail extension to the first of two Galatea Lakes.

Signage at Lillian Lake, on this day, makes no mention of the intersection for the new Guinn's Pass trail branch prior to and near Galatea Lake # 1.

Trail from Lillian Lake passes through a field of scree and campsite pads prior to steeper and more rugged, rocky trail which eventually exits forest into a scenic, sub-alpine bowl with incredible mountain views and a panoramic mountain vista back across Lillian Lake to mountains on the far side of Kananaskis Trail (Hwy 40) where this hike begins.

The gentle mountain breeze, combined with the warmth of the sun creates an idyllic combination worthy of pursuit.

My vertical potential for this very warm day has been fully consumed and Ewa continues past the new Guinn's Pass trail junction for spectacular vistas over Galatea Lake #1.

Following photos in the next section have been captured by and provided courtesy of Ewa P.

The short down hike from the panoramic bowl through forest on steep, rugged trail is brief and precedes the return hike to the Galatea Lakes trail-head via the same route used for access.

The flood-altered terrain is sufficiently unique and spectacular to make the return hike seem like an entirely new experience.

The retreat is predominantly descent and the uncommon heat of the day appears to make the return hike longer than expected.

Even four years later, and in spite of significant construction of new trail and infrastructure, the flood devastation is awesome to experience.  The destructive and healing power of nature is on full display and summons up reminders of the need for respect.

Photographer's: be advised.  The raw beauty of new terrain and the aftermath of violent destruction is tempered by new feature, new growth and the nuance of filtered and angled sunlight.

This is a special experience with the very real potential to become a much longer day than originally anticipated.

The hot summer of 2017 has been a record year of forest fire activity in Western Canada and prevailing winds have spread the smoke far and wide.  While evidence of the smoke is clearly present in valleys, the presence in the forest is negligible.

The Galatea Creek trail past Lillian Lake to Galatea Lakes is a classic Kananaskis Country hike.  The reconstructed trail is substantially revised from to it's predecessor and would likely be assessed by most as superior to the original.

Photographs for the Galatea Lakes hike were captured on the very warm and sunny summer day of Sunday, August 27, 2017 in Kananaskis Country west of Calgary, Alberta, Canada.