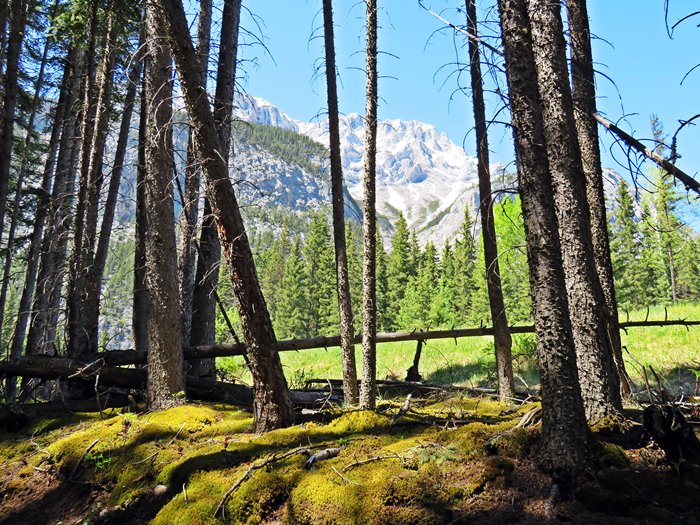 The Banff exit onto Lake Minnewanka Road, heading north from the TransCanada Highway, will skirt the east side of massive Cascade Mountain to the left and pass the entrance for parking at Cascade Ponds on the right.

Following a short, twisting  drive uphill there is clear signage for parking at Lower Bankhead which offers the opportunity to explore an old, historic mining site active in the early days of Banff National Park.

The clearly marked and defined trail begins near the large and obvious slack heaps (big piles of poor quality coal) at the far south end of the Interpretive Loop.  Initially, the black, coal-covered trail heads south through grassy aprons surrounded by mixed evergreen and deciduous forest.

Cascade Mountain looms large to the right and a flank of Mount Rundle above the Town of Banff brackets the trail view south.  Bits of nondescript scrap metal and wood litter trail aprons as subtle reminders of past industrial activity.

As trail width margins diminish, the hike proceeds through dense aromatic forest. Soon, an old overgrown road branches off to the right.  This will need to be investigated.

The short, grassy road ramp through forest soon opens into a large, elevated field with spectacular views of Cascade Mountain looming overhead.  The large and groomed terrace likely served an industrial purpose in the past but there are no definitive artifacts or obvious clues to determine past purpose.

The incredible view makes the short detour worthwhile prior to exit over graded slope for return to the original, well-used trail through dense forest.

Trail proceeds south and passes a large park maintenance facility, barely visible through forest on the left, prior to a small incline bordered by piles of rock debris.

The trail passes through the rock piles and reveals a small creek crossing.  The creek bed hosts a small volume of runoff from Cascade Mountain and is easy to cross.

Past the small creek, the trail arrives at an uncontrolled crossing of Lake Minnewanka Road.  The crossing is on a sloped curve in the road and waiting for safe passage will likely be required.

Traffic regularly travels above the speed limit so extra due diligence and holding of children's hands is highly recommended.

The trail continues south and a very short distance past the Lake Minnewanka Road crossing, the trail takes an unexpected sharp turn left at a clearly signed intersection. This trail branch makes a short curling descent into and through spectacular old growth forest.

The transition is a pleasant experience and all senses pick up the abrupt change.  The trail sign reveals the distance to Cascade Ponds is 1.2 KMs (¾ of a mile) further on more rustic trail where occasional dead fall requires navigation. The damp aroma in the cool shade is intoxicating.

The trail literally pops out past a small apron of brush onto the manicured lawns surrounding Cascade Ponds with the west end of Mount Rundle consuming a good portion of the left horizon.

There is an option to wander and tour the pristine ponds linked by paths and bridges. Cascade Ponds is an incredibly beautiful and often busy attraction largely surrounded by mountains.

The return hike to Lower Bankhead is achieved via the same route taken to complete the 4.2 KM (2⅝ mile) minimum distance round trip.  Add at least a kilometer for access at Lower Bankhead plus additional roaming distance at Cascade Ponds.

The hike can obviously begin from either end.  The signage numbers do not quite add up so the hike may be a bit longer than originally posted but the differences are not consequential.

Like any hike, the only important factor is the sustained ability to maintain a positive attitude at all times.

A very good family full day might be a morning drive to Cascade Ponds for some exploration and a nice picnic lunch in the sun followed by this round trip hike for exploration of the interesting and historic mining features at Lower Bankhead.

On another day, parking at Lower Bankhead and taking the trail on the other side of Lake Minnewanka Road will track past remnants of old office and residential ruins at Upper Bankhead before completing the historic and interesting trail past old mining ruins en route to C-Level Cirque.

About half way up, find subsidiary path onto the old coal slack heaps for lofty views across Lake Minnewanka which has an old town buried beneath the surface.  Lake Minnewanka is a popular diving objective.

So much to do.  So little time.