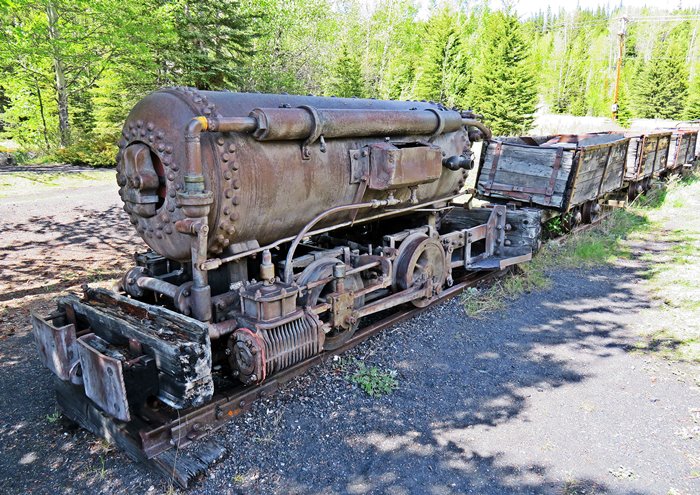 The exit onto Lake Minnewanka Road heading north from the TransCanada Highway will skirt the East slopes of massive Cascade Mountain on the left and pass the entrance for parking at Cascade Ponds.

Following a short drive uphill, there is clear signage for parking at Lower Bankhead which offers the opportunity to explore an old, historical mining site active in the early days of Banff National Park.

After parking in a shady area offering protection from the sun, a short stroll to the turnabout loop at the far end of the parking area will reveal large boulders protecting a faint trail.  The short trail winds its way uphill through forest to the crumbling foundations of an old church.

The Trinity United Church was constructed in 1908 to serve the community needs for residents of Upper Bankhead.  After the mine closed in 1922, many Bankhead homes and stores were relocated to the Town of Banff.

The Trinity United Church was sawn in half and moved by rail to Calgary where the reassembled church remained in service until 1962.  A plaque is in place but the accompanying photo has been missing for several years.  There is a photo at the trail-head viewing platform.

Back at the parking area a viewing platform hosts interpretive and historical information which complements the large view over the Lower Bankhead coal mining operation.  It is worth the time to read the brief history of the mines and townsite.

Old photos will aid the imagination in recreating the buildings which exist now as multiple crumbling concrete foundations.  There is a photo of the Trinity United Church in the book.

The flight of wooden stairs from the viewing platform leads to a short landing and a left turn to another significant flight of descending wood and earthen steps.  It may be worth taking a moment to reassure oneself that elderly or tiny legs will be able to navigate the return ascent after walking a couple of kilometers.

The initial and main mine shaft occupied the location where the stairs end.  There is no evidence of the main mine shaft entrance now but the photo on the accompanying interpretive plaque is meaningful.

The concrete remains of the all important lamp house are just beyond the bottom of the steps.  Miners checked in and out of here at the beginning and end of each work day.  On this day, the structure is hosting a wedding photography session.

From here the self-directed tour proceeds on black coal trail in a counterclockwise direction past interpretive signs and crumbling concrete foundations which held heavy and noisy mining machinery.  Each exhibit provides interpretive information along the first half of the loop.

Past the Lamp House, interpretive trail veering right in a counterclockwise direction passes large concrete foundations which once hosted massive generators.  Soon, the trail arrives at the only building left standing.

This is the Transformer Building which converted electrical power for transmission to Banff Townsite several kilometers south.

In the Town of Banff, near the original cemetery, there is another historic Transformer Substation which converted power for distribution and use in individual homes and businesses of the period.

The Transformer Building at Lower Bankhead also hosts an informative interpretive display with historic photographs and exhibits of mining machinery used in the early 1900's.

Nearby, bolts protruding from large and crumbling concrete foundations once secured the massive generators which perpetually created the electrical power require to run the mine.  The foundations of the old Boiler House are adjacent.  Interpretive plaques throughout the complex provide brief descriptions and historical photographs of the building's former glory.

Past the Boiler House, an imposing view of Cascade Mountain looms above the facility prior to arrival at the ruins of the Briquette Buildings where inferior, brittle coal was transformed into briquettes.

An impressive example of a more modern briquette manufacturing facility can be found at the protected National Historic Site - Brazeau Collieries at far away Nordegg, Alberta where fascinating tours of the well preserved and very large structure are available for a nominal fee.

Past the foundations for the Briquette Buildings, remnant foundations for the massive tipple are scattered about.  The tipple processed freshly mined raw coal for removal of foreign materials like rock prior to sorting remaining coal into sizes and grades for different industrial applications.

The mining operation at Lower Bankhead and the townsite at Upper Bankhead above were powered by burning coal creating compressed steam in boilers, which in turn powered ancillary machinery including the generators creating electrical power.

The best local example of a preserved tipple stands at a National Historic Site in East Coulee near Drumheller, Alberta.

Custodians of the tipple at the Atlas Coal Mine provide fascinating summer interpretive tours through the interior of the preserved tipple.

Around and past the tipple foundations are the large piles of inferior coal unsuitable for industrial use.  These coal slack heaps have been lying dormant for many decades.  Mature trees have taken root.  Climbing on the slack heaps is a bad idea for a bunch of reasons.

The north end trailhead for the hike to Cascade Ponds is signed and obvious at this south end terminus of the Lower Bankhead historic interpretive loop.  The trail south begins at the coal slack heaps and initially passes a few more.

The swing north on the interpretive loop passes the largest concrete tipple foundation and fields hosting many rhubarb plants followed by the first of many nondescript, derelict and undocumented concrete foundations before arrival at one of the steam-powered locomotives which transported coal and miners through the restricted confines of mine shafts.

Past the steam locomotive, several additional nondescript foundations for very large buildings undoubtedly supported the operation of miners and equipment.

Towards the end of the loop and past the bulk of derelict foundations, a faint dirt trail curls east away from the interpretive route through a large and open grass field towards unknown objectives.

Large numbers of Chinese migrant workers were employed to work at and in the mines and many, if not all, were segregated in a shanty town behind the coal slack heaps.

The trail leads to broad open fields where migrant workers lived.  No evidence remains of their occupation but the ground is drilled with gopher holes where navigation must be cautious to avoid a turned ankle.

Rhubarb plants were planted by the Chinese migrants as a source of nutritious food and their tenacious and expanded existence throughout the grounds lie testament to the hard work of the migrant miners and the resilience of rhubarb.

The land is terraced and although largely reclaimed it is obvious the land had both industrial and residential purpose.  Trail condition improves and intercepts an old road which leads to and crosses the Cascade River on a route which will not be fully investigated.

Back at Lower Bankhead, flat bridges over Spring runoff lead back to the now vacated Lamp House which precludes the daunting steps ascending to the parking area.

Interpretive plaques and historical photos on the initial observation deck are well done and worthy of review.

Insight into the era is well presented and adds an important element to the history of this industrial facility operated within a Canadian National Park many decades prior.

Pictures for this historical hike are taken at Lower Bankhead along Lake Minnewanka Road in Banff National Park on Saturday, June 3, 2017 west of Calgary, Alberta, Canada.