The Midland Coal Mining Company operated near Drumheller, Alberta between 1912 and 1959. 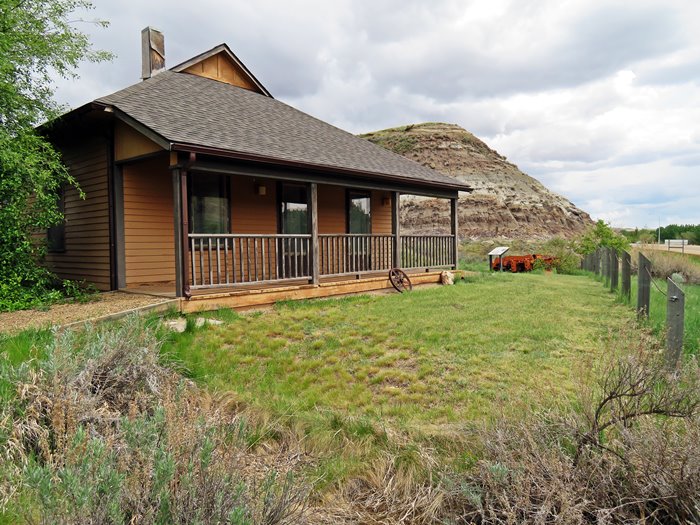 Coal mining was a robust industry along the Red Deer River Valley in the early 1900's.  At the industrial peak, 157 coal mining operations processed rich and abundant seams of coal throughout the region.

Scant evidence remains of their existence now but enough has been preserved to capture the historical feeling while enjoying a short and easy hike through fascinating terrain.

The parking area for the Midland Coal Mining Company Ltd. is clearly signed along North Dinosaur Trail a short distance northwest from Drumheller.

At the main office building and parking area an orange coal cutter, resembling a giant chain saw, shares the front lawn.  Interpretive signs behind the mine office building begin the interesting story of former industrial glory.

From parking behind the mine office, a paved path wanders along a short loop past remnants of former buildings which supported the mining operation.  There is little remaining now but the historical photos and interpretive plaques provide an opportunity for imagination to create the images of past industrial activity within spectacular badlands terrain.

Bits of old concrete foundations and scraps of metal or rusty cable provide clues of former industrial enterprise along this historical scavenger hunt.  The ever-changing surrounding Badlands terrain is captivating and uniquely beautiful.

The large concrete base for the tipple is the most prominent feature but the curious can root around in the surrounding terrain to find other concrete features in varying states of decomposition on both sides of the access road.

Opportunities for unique and fascinating photographs are plentiful within the overwhelming beauty of surrounding Badlands topography.

The Midland Coal Mine Company stop is a good spot to stretch the legs and enjoy the opportunity for some primary education applicable to many additional and similarly fascinating opportunities in the area.

Entry into the parking area for the Midland Coal Mine Company passes an unsigned gravel road branching left away from the main building. Curiosity demands investigation of this road which leads to another nearby parking area and an even better historical hiking opportunity at the former site of the Mercury Mine otherwise known as Midland Coal Mine # 2.

Photographs at the first Midland Coal Mine site were taken on Tuesday, May 16, 2017 along North Dinosaur Trail in Midland Provincial Park near Drumheller, Alberta, Canada.