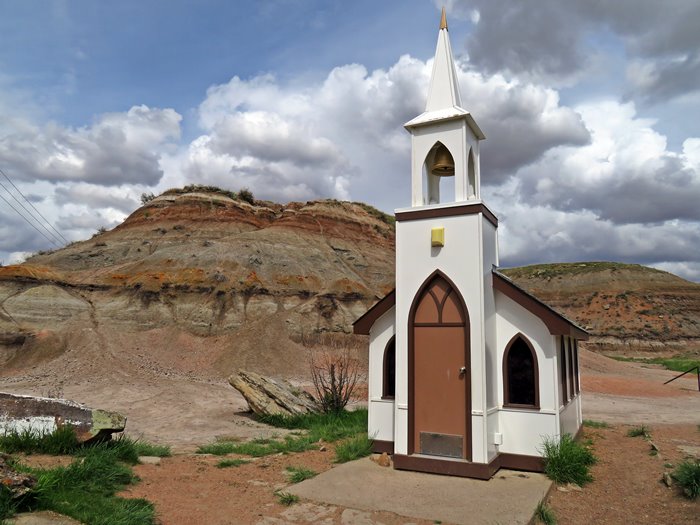 Drumheller's Little Church stands proudly on the north-east side of North Dinosaur Trail a short distance north past the Royal Tyrrell Museum.

The Little Church was originally constructed in 1968 before being renewed and replenished in 1991.  The white, classic lines of the tiny structure are surrounded by the surreal and colorful lines of Badlands terrain.

The Little Church has a steeple, stained glass windows, an alter and six tiny, wooden pews designed to seat a single adult.

Real ceremonies are held in this idyllic setting on a regular basis and the beauty of the location demands a unspoken level of respect.  The Little Church is much more than a tourist attraction.

A short distance down North Dinosaur Trail find the turnoff for the Royal Tyrrell Museum which opened for the season yesterday on May 15.

The newest exhibit among thousands of others is an immaculately preserved, armored dinosaur restored in Alberta after being discovered in 2011 near Fort McMurray.  This new species of armored dinosaur, called a nodosaur, is estimated to be 112 million years old.

There is an opportunity adjacent to the entrance at Royal Tyrrell Museum to experience the Viewpoint Lookout which was closed when my son and I visited earlier in the year to hike the Badland Interpretive Trail.

The level landing at the top is welcome relief from the many steps to the top.

Three hundred and sixty degree vistas from the top of the hill provide amazing views of the surrounding, colorful Badlands and the Royal Tyrrell Museum in Midland Provincial Park northeast of Drumheller.

Pictures at Drumheller's Little Church and the Royal Tyrrell Museum Viewpoint Lookout were taken on Tuesday, May 16, 2017 along the North Dinosaur Trail in Midland Provincial Park near Drumheller, Alberta, Canada.