The East Coulee School Museum is situated along Highway 10 about 20 KM (12½ miles) southeast of the Town of Drumheller in the small Community of East Coulee, which is a short distance shy of the Atlas Coal Mine National Historic Exhibit.

On this initial visit to the East Coulee School Museum, the first important thing to notice is the historical attraction is closed during winter and open during a short summer.  Today, towards the end of February, son Bill and I will be limited to touring the outside of the historic school.

A war memorial at the street intersection, surrounded with a white picket fence, pays tribute to area citizens who served during World War II and the Korean War. 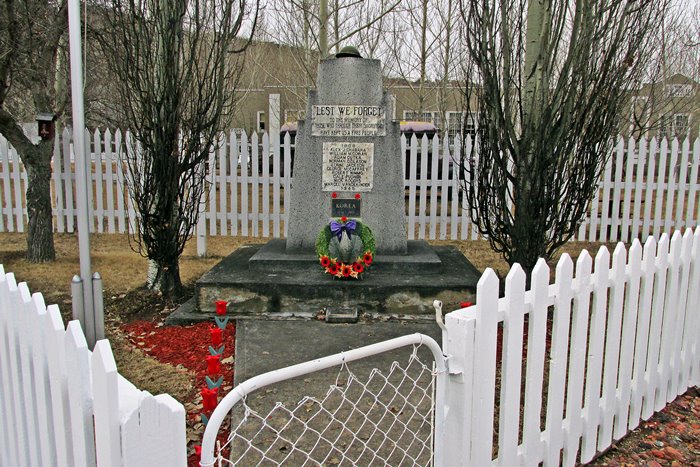 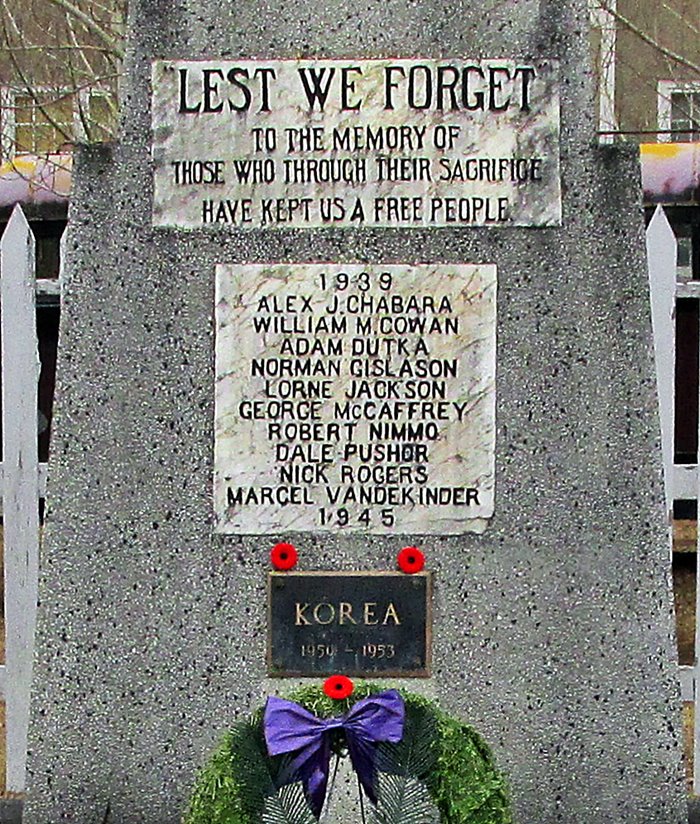 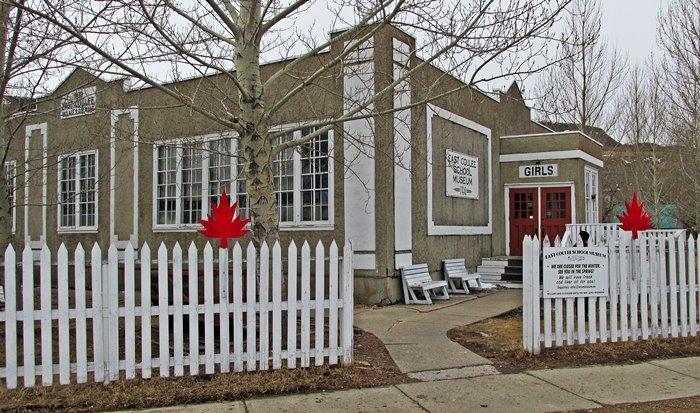 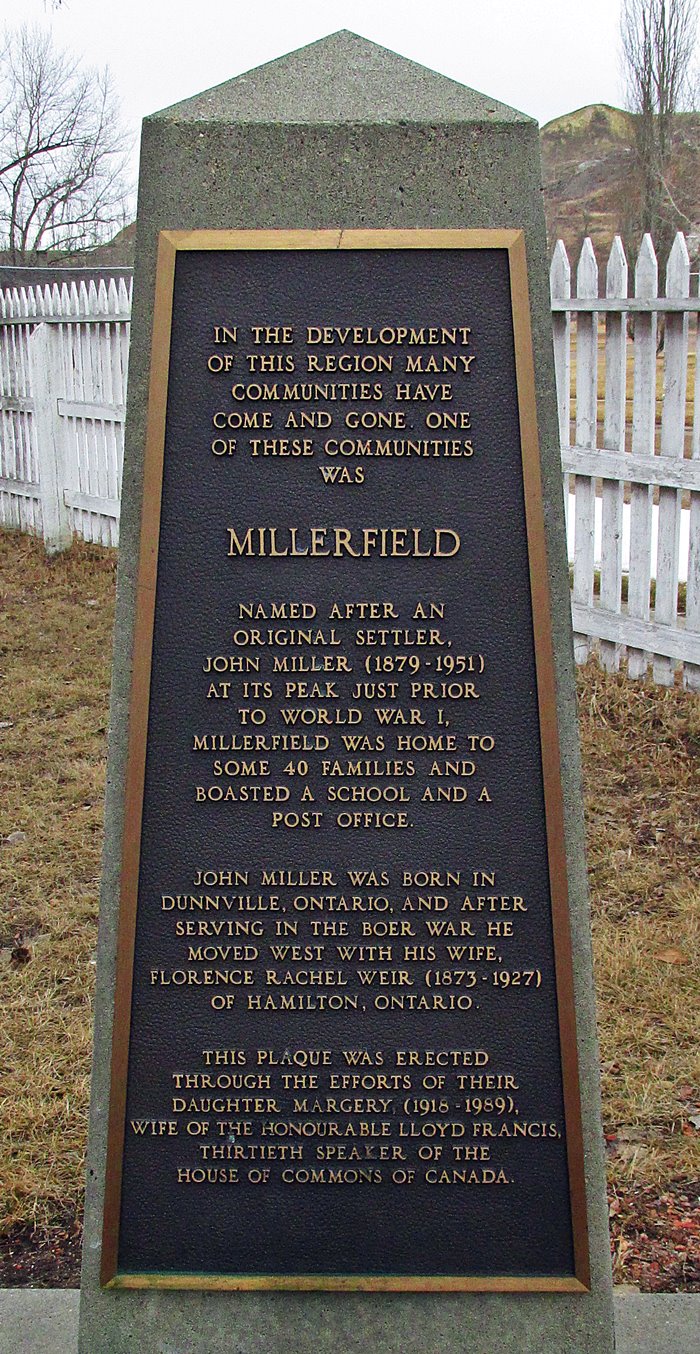 The initial East Coulee School school opened in East Coulee in 1930 with four formal classrooms amalgamating the efforts of several informal community schools as population in the valley expanded rapidly with rail service aiding the development and expansion of the Empire Coal Mine and Atlas Coal Mining operations.

In 1934, four additional classrooms were added to service a burgeoning population which peaked near 4,000 people before natural gas began to replace coal in the 1950's.

The school closed in the 1970's as the Hamlet of East Coulee's population continued to decline.  In 1985, following significant and dedicated effort,  the old school was reopened as the East Coulee School Museum where memorabilia and artifacts of the time recall a snapshot of the way things were in less-sophisticated times.

There is much to learn and compare.  The present Drumheller Community of East Coulee supports a current population of about 200 people surrounded by spectacular, surreal landscape.

There are separate entrances at each end of the school; one for the girls and another for the boys.

The grounds surrounding the school contain a collections of period artifacts and exhibits typical to a mining town. 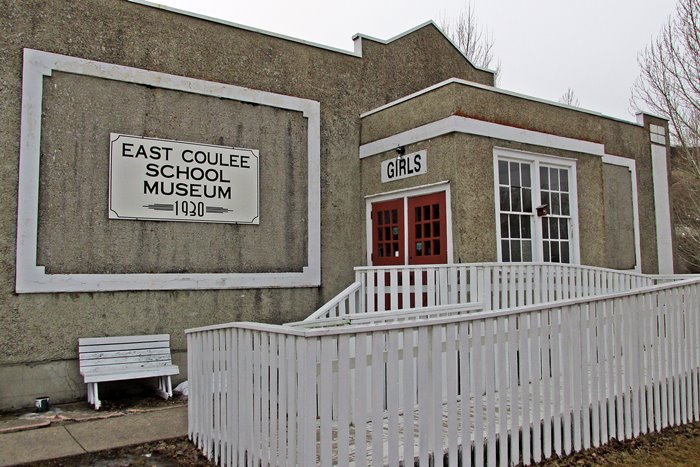 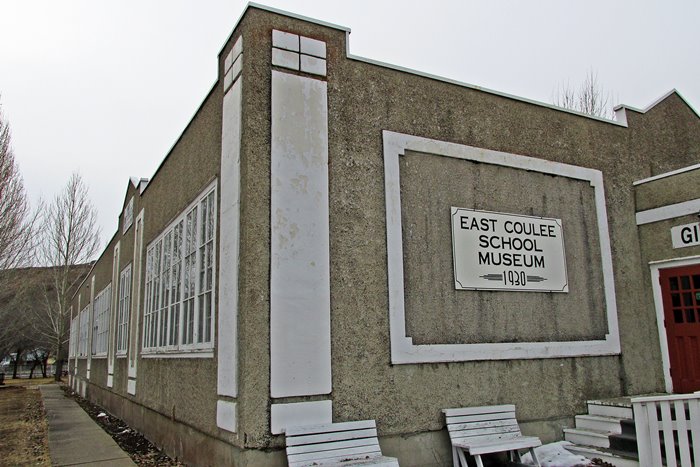 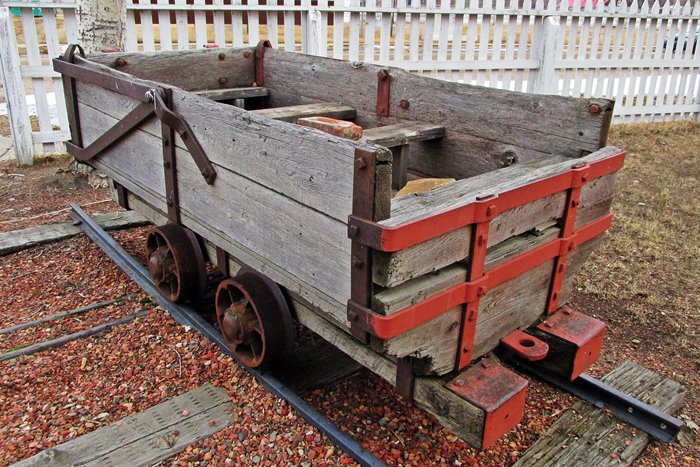 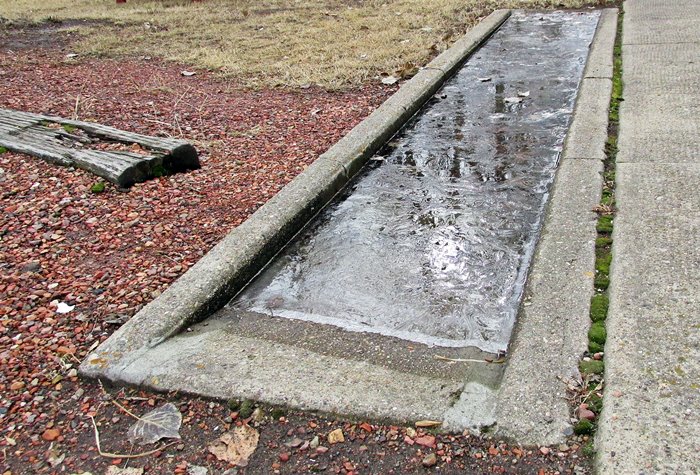 The horse-drawn cart with benches would have transported miners within the mining complex.  At each end of the old East Coulee School Museum, adjacent to the sidewalk and near the separate gender entrances to the school, there are curious, shallow concrete troughs containing water.

What are these?  My son and I guess they are used for removal of mud (or soot) from staff and student boots prior to building entry.  This guess could be wrong.

A bright red set of wagon wheels support the reels and nozzles for a horse-drawn fire fighting rig.  Towards the 'boys entrance' end of the school, another wooden cart on rails is loaded with klinkers from past mining operations.

Between them an old, purple school bus would have once collected students beyond walking range. 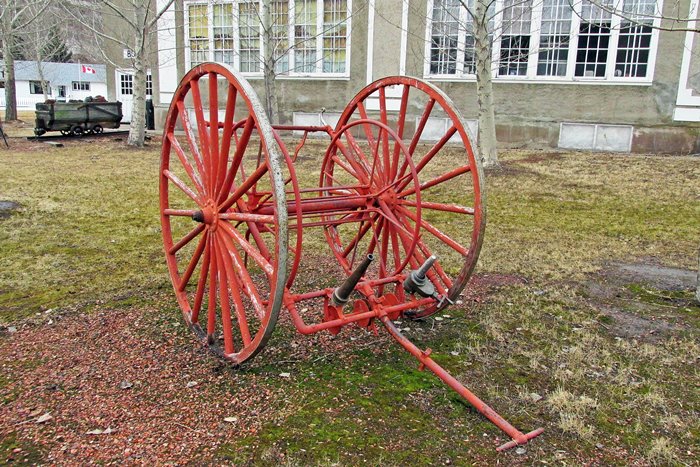 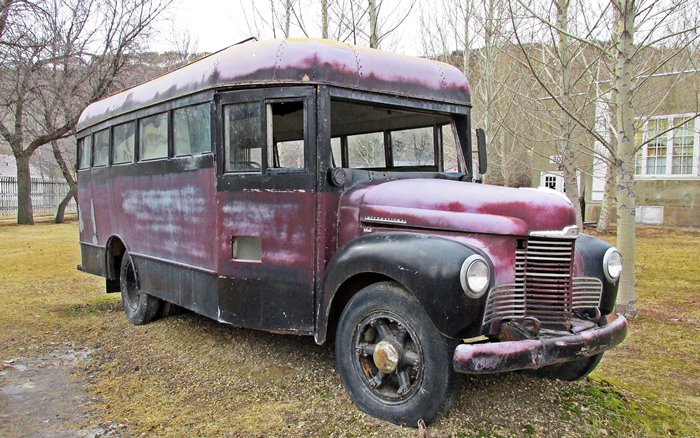 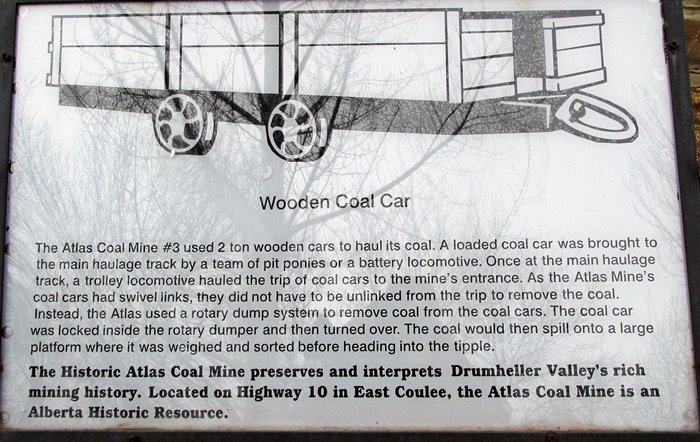 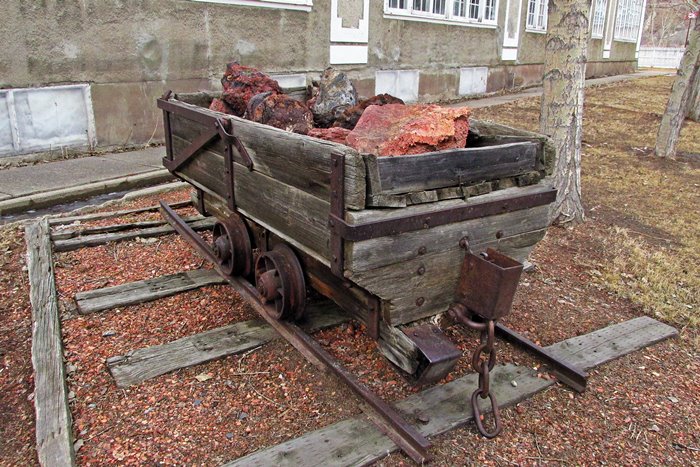 The unassuming back of the historic school features the same large windows to four more classrooms.  The maintenance cost for the museum is likely substantial.

Back towards the beginning point of the circuitous external tour, there is a curious artifact near the somewhat out-of-place, modern playground within expansive surrounding grounds.

Several minutes of staring at the unique artifact summons up a number of speculative possibilities but none are confident or helpful in determining it's purpose.  The red color is perhaps indicative of a firefighting application.

Is that a water well head?  Is the hand crank operating a pump?  It is the yellow part that creates the most uncertainty? 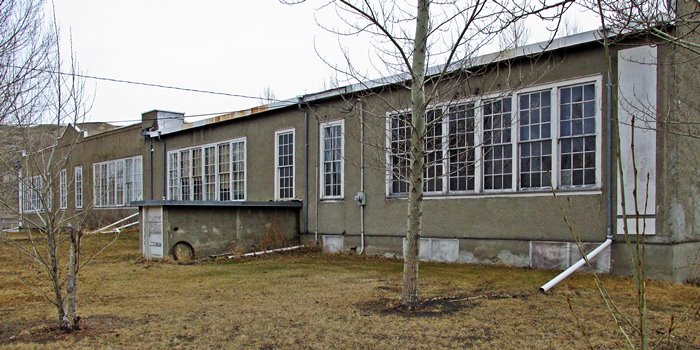 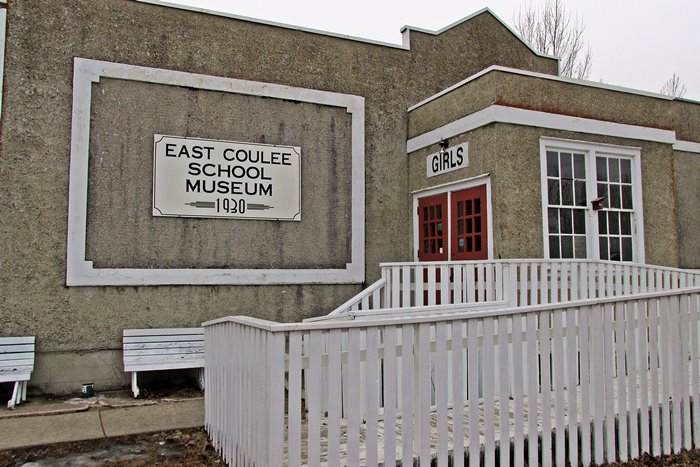 This visit to the exterior of the East Coulee School Museum has clearly fired the requirement to return in the summer for the tour of interior artifacts, memorabilia and fascinating recollection of challenging times.

For those unfamiliar or unacquainted with the Drumheller and East Coulee area, there is a veritable goldmine (coal mine) of opportunity here for hiking, touring and sightseeing in spectacular and unique terrain.

The drive through prairie between Calgary and Drumheller requires child-like enthusiasm, and maintenance of a positive attitude but the sign, on the south Highway 9 approach, for Horseshoe Canyon is where the adventure begins.

Several days spent in the area to embrace multiple major attractions and, perhaps, fit in a fascinating and unique hike or two will reduce the need to commute more frequently.

In many trips over more than three decades, the anticipation of arrival here has never diminished.  There is always something new to discover and this scholarly adventure is no exception.

Photographs for this visit to the East Coulee School Museum were taken in the badlands of East Coulee near Drumheller, northeast of Calgary, Alberta, Canada on Saturday, February 18, 2017.