Troll Falls is a short, easy and popular hike near Nakiska in Kananaskis Country, west of Calgary, Alberta, Canada. 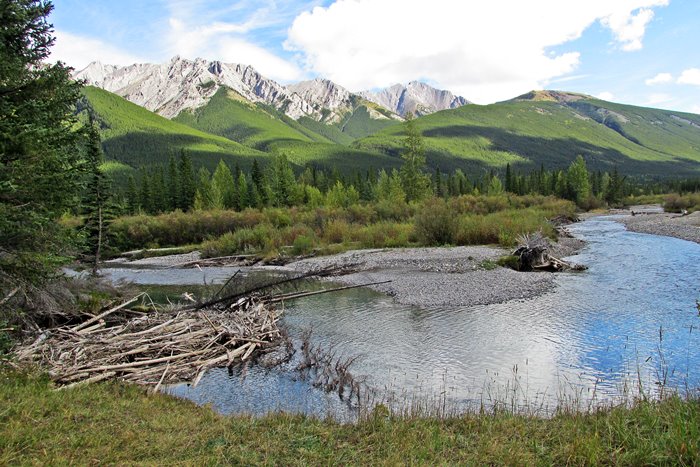 Following the hike along Ribbon Creek, with a return via the interesting ski route linking back through Coal Mine Scar Trail and Hidden Trail to the Ribbon Creek parking area, there remains time for Mélanie and I to revisit an old and familiar friend.

From Kananaskis Trail (Hwy 40) the turnoff for Nakiska Ski Resort crosses the short, stone bridge over Kananaskis River with calendar quality images of Mount Kidd to the south and Mount Lorette to the north.

After passing the left turn leading to the Kananaskis Delta Lodge, the first turn to the right leads directly into the Stoney Trail Day Use parking area along Stoney Trail for one of several access points to the short, easy and always popular Troll Falls hiking trail.

The wide, well-groomed Troll Falls path is clearly signed to the left from historical and venerable Stoney Trail, which is the gated road under the power lines.  The Troll Falls trail travels through tall, evergreen forest with dense underbrush over a shallow rise that provides a spectacular mountain vista before morphing into Lodgepole Pine and Aspen forest.

The trail complex in this area is quite robust but intersections are clearly signed. This approach to Troll Falls is a straight-in route without using any options to left or right. 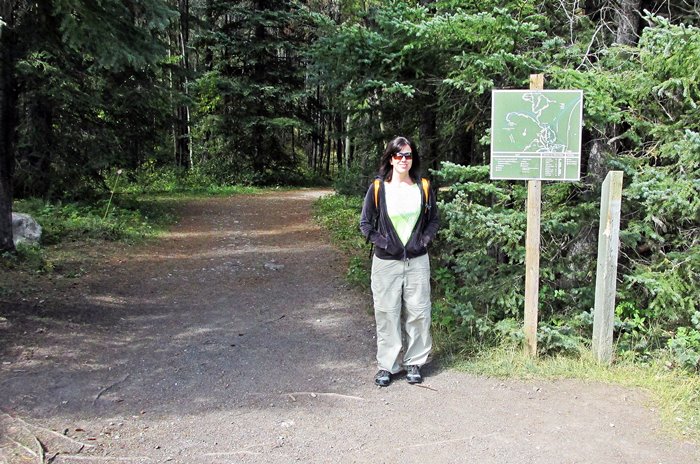 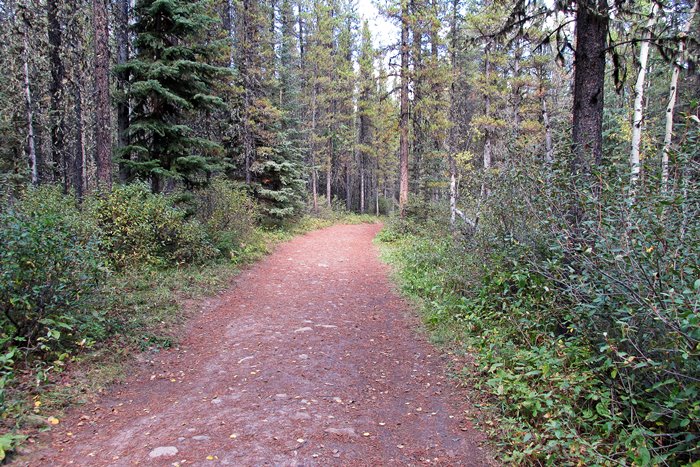 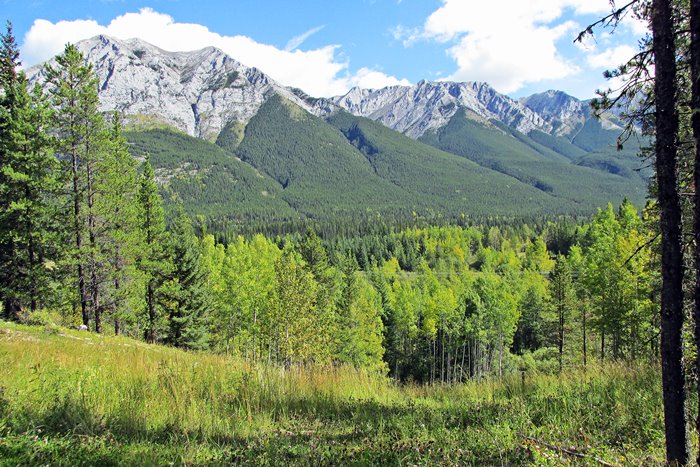 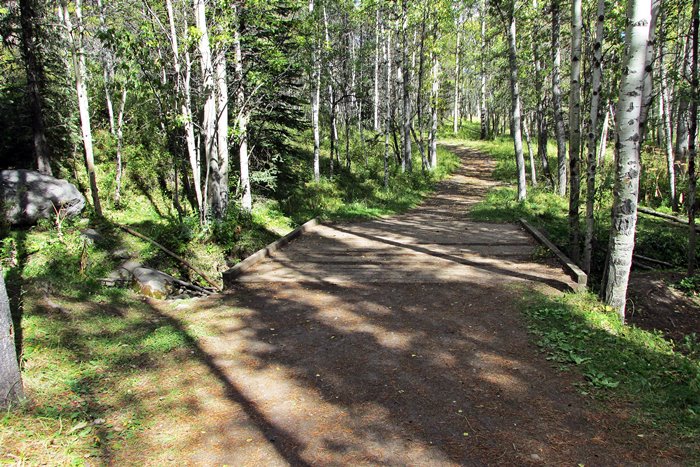 The four-way intersection into Troll Falls is clearly signed and the hike continues on good path, with 2013 flood-related rubble still clearly evident, adding a feeling of mystique for the short distance remaining to the main waterfall.

The process repeats itself along most major Kananaskis Country watercourses where creek and river banks continue to erode from flood damage.  Compromised supporting soil along the creek bank collapses and trees tumble.

Ongoing maintenance reduces the risk of injury on the trail but the application of common sense is valuable.  The sound of Troll Falls is first heard before the enticing veil of white water beckons hikers to the base. 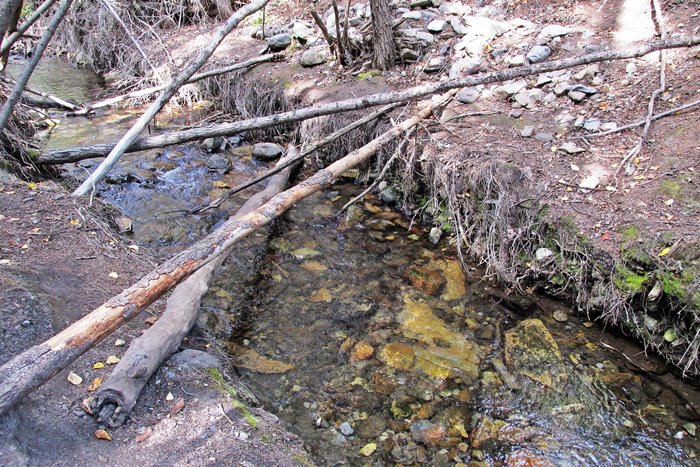 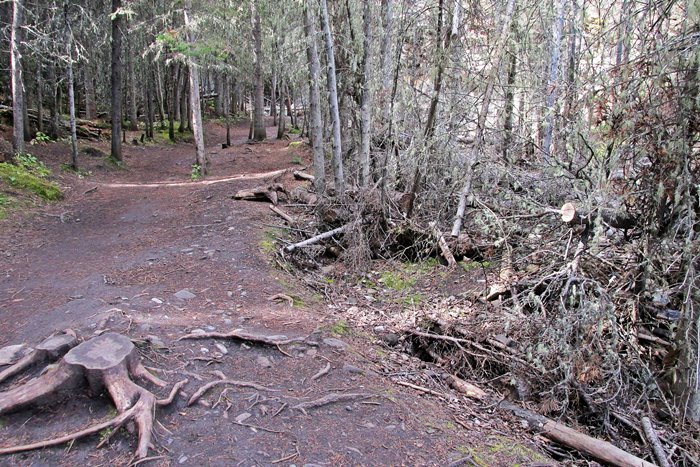 Surrounding bedrock at the base of Troll Falls is wet from constant mist created by water falling over rock in swirling air currents.  This is a very popular ice climbing arena during winter due to short, easy access.  The base fall is easy to top rope and there are several frozen waterfalls along Marmot Creek which stretches several kilometers back onto the flanks of Mount Allan and Mount Collembola.

Caution is expedient in accessing the Troll Falls bowl.  Appropriate footwear becomes a significant safety feature when hiking over muddy and slippery rock on the route to the face of 'the Ogre' and continuing trail around, up and away from the waterfall.

Troll Falls is an incredibly beautiful and sensory space best visited in off days or hours when crowds are small or non-existent, like today.  The trail loops up, along the cliff face, and branches back down to the main trail.  Our choice for retreat is to avoid the main trail and track the creek side initially on challenging, rustic trail which clearly illustrates continuing flood erosion.

The off-trail route involves climbing over and crawling under obstacles as the creek flows towards Kananaskis River.  As reasonable off-trail routes disappear, an expeditious retreat to the main trail is in close proximity to the entrance at the four-way junction. 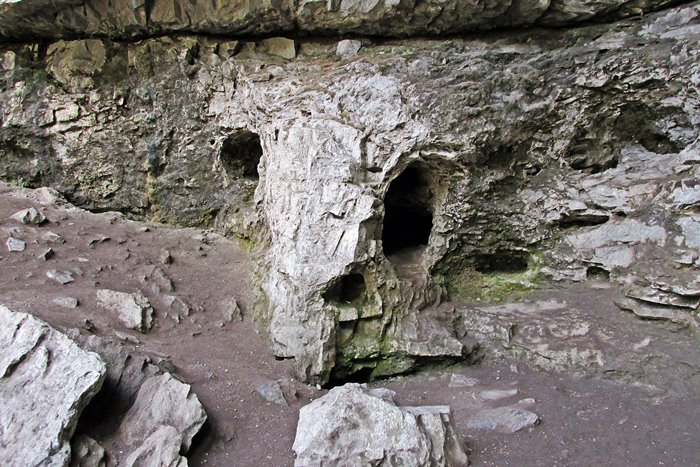 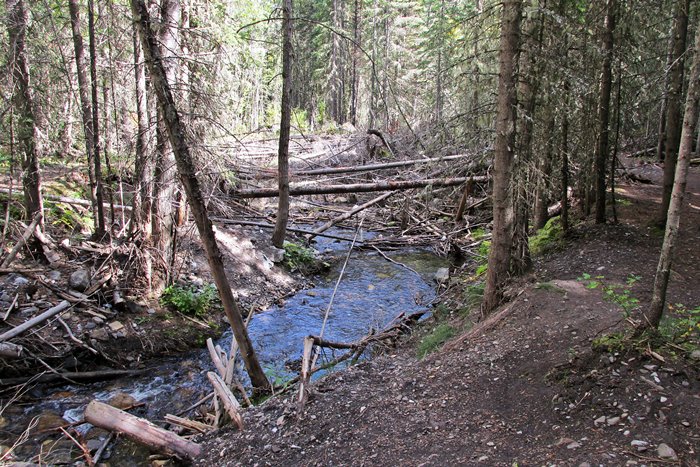 This is the first time Mélanie has seen the waterfall since the flood but we have hiked into and climbed ice here many times in past seasons.  On exit, via the same route taken in, the four-way junction allows alternative paths for retreat.

One option is a short distance left for a return route along the flat and boring Stoney Trail with power transmission lines draped overhead.  Stoney Trail is a more efficient and less interesting access route to and from Troll Falls.

Another alternative from the four-way junction is to cross Stoney Trail and link up directly with a faint trail though grassland into Aspen forest joining the Hay Meadow Trail.

The Hay Meadow Trail intercepts the Kananaskis River on the swing back towards parking at the Stoney Trail Day Use Area.  There are incredible views across the flood-altered river plain and forest tunnels to magnificent mountains which include Mount Baldy and Old Baldy.

Along the Kananaskis River bank, the spit of land used for the annual eagle migration count has been altered but remains available for this important, annually-recurring ritual.

The Hay Meadow Trail completes through a sunlit, forest tunnel with a swing right into the Stoney Trail Day Use parking area. 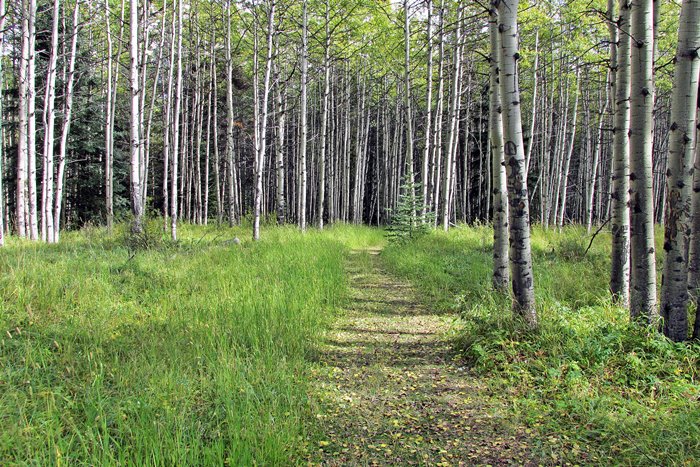 The drive north along Kananaskis Trail (Hwy 40) features an iconic and photogenic oasis that has provided peaceful refreshment and relaxation for travelers on the east side of Highway 40 south of Barrier Lake and the pass along the side of Mount Baldy. 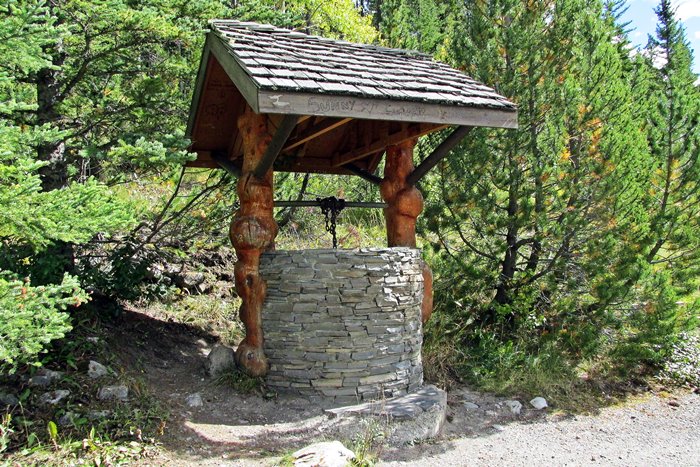 This is O'Shaughnessy Falls.  The flat falls is uniquely beautiful and hosts a water (wishing) well and a memorial bench for visitors to enjoy a relaxing moment.  The water should be run through a filter or treated to be safe.  A short trail climbs steps and wanders up creek side for a short distance.

This perennial 'Point of Interest' waterfall provides a memorial bench for pondering pure natural sound and beautiful imagery on a day when the highway is quiet.

Photographs for this short, easy hike into Troll Falls with a return via Hay Meadow were captured in Kananaskis Country west of Calgary, Alberta, Canada on September 7, 2016.