The Terrace Trail resides on a plateau along the east flank of Mount Kidd in Kananaskis Country, Alberta, Canada. 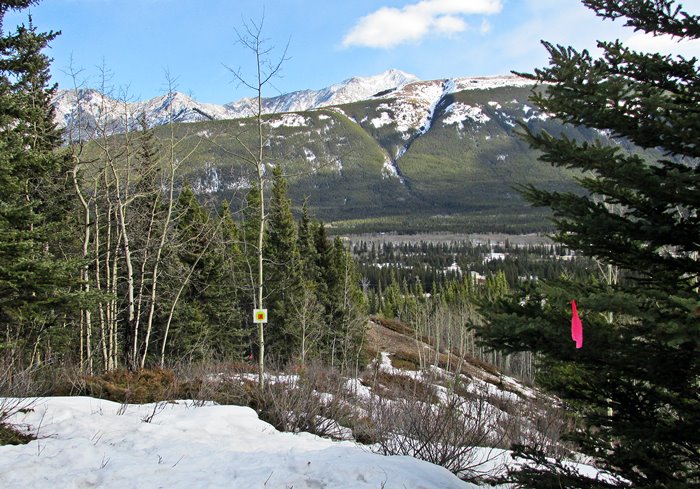 Best positioned parking is achieved by turning right from Kananaskis Trail (Highway 40) onto Mount Allan Road towards Nakiska.  The first turn left past the stone bridge over Kananaskis River on to paved Centennial Drive passes Ribbon Creek Road on the right, then proceeds further uphill past the left turn into the helicopter pad.

Park at the very back, past all other parking areas, for closest parking access to the Terrace Trail.  Snowshoes can be strapped onto sturdy boots at a picnic table adjacent to the open sports field.  It is important to avoid hiking on groomed cross-country ski tracks.  Beside is OK.

Majestic Mount Kidd looms large ahead to the right and snow-capped mountains on the other side of Kananaskis Valley create dramatic surrounding scenery..

Our access uses the snowshoe trails which passes skeletons of quinzees along the route into spectacular mountain views across Kananaskis Valley.  These snow shelter remains are likely the result of courses offered by Kananaskis Outfitters. 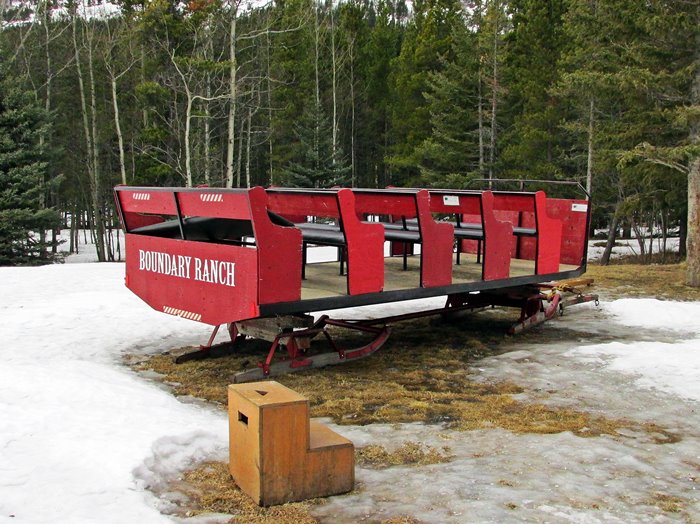 The Terrace Trail access is a short distance south and clearly-signed.  Snow cover on this day is a bit thin and crusty but the snowshoes look after deeper sections in protected areas.

Once on the Terrace Trail, the route is clear and straightforward.  Today's objective is about 1.6 KM (1.0 mile) south to determine the condition of a wooden bridge over a small drainage from Mount Kidd.

The following photo documents the quaint wooden bridge on June 10, 2013 and was taken on a return hike of the entire, one-way 7.2 KM (4½ mile) length of the Terrace Trail between Kananaskis Mountain Lodge and the Galatea Day Use Area.

This previous hike was just a few days prior to the historic and devastating flood which wreaked horrific damage between June 20 and 23, 2013 and closed the entire park for over a year.  Did the picturesque little wooden bridge survive?

The remains of the wooden bridge lay scattered beside and in the bottom of a much expanded drainage containing copious dead fall from large, rolling boulders and downed trees.

It may take decades for water course edge erosion to cease.

Beyond the creek crossing, there is a trail closure further along on the left.  This trail previously led to a grassy viewpoint along the edge of a steep bluff.  The viewpoint provided sweeping views over the Kananaskis Country Golf Course and the mountains on the far side of Kananaskis Valley.

Further south along the Terrace Trail there is a faint, sketchy trail off to the left which tracks the edge of the plateau and provides sweeping views over the world-class Kananaskis Country Golf Course which was significantly damaged.  Renovation is clearly underway and the golf course is scheduled to reopen in 2018.

Return is via the same taken in through and past the damaged drainage and destroyed bridge to Kananaskis Village.

After dropping in to Kananaskis Outfitters where a broad range of rental gear and guiding services are available, there is time for relaxation.

A large variety of dining and retail establishments reside within Kananaskis Village and the Kananaskis Mountain Lodge caters daily to local and international visitors from the world.

There is time for a hot Starbucks beverage at the Market Cafe in Kananaskis Mountain Lodge before a pleasant and scenic hike around the nearby, short and flat Village Rim Trail with spectacular vistas across Kananaskis Valley to majestic mountains beyond.

Dinner is fine dining at Notables Bowness back in Calgary, Alberta, Canada.

Photographs for this snowshoe on the Terrace Trail in Kananaskis Country were captured on Friday, February 17, 2017.