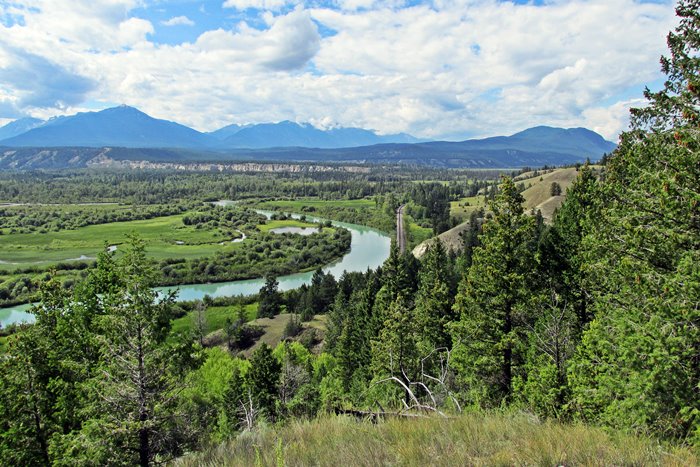 The Columbia River provided transportation through the homelands of First Nations where the Shuswap Band and the Ktunaxa Nation continue living today.  In 1807, the legendary explorer David Thompson established Kootenae House along the banks of the Columbia River near present day Invermere, British Columbia, Canada.

In early days, when borders between Canada and the United States were newly established, transportation on foot, by canoe or via horseback preceded horse-drawn stagecoach, stern wheeler and rail traffic.

By the 1920's the proliferation of the automobile and completion of the Banff-Windermere Parkway in 1923 provided the opportunity for a motor coach route to ease transition from main routes to specific isolated destinations such as the natural Radium Hot Springs.

Such was the nature of Old Coach Trail which allowed Tin Lizzies, their counterparts and successors to shuttle riverboat passengers via rustic road from a landing station near Dry Gulch on the Columbia River to accommodation at Radium.  The original stage coach route was a considerable distance east of Old Coach Trail.

The 9.3 KM (5⅞ mile) one-way stretch of restored 'road' has been reconstructed on bench lands above the Columbia River for foot and bicycle traffic recreation.  All motorized vehicles are prohibited.  Terrain diversity and the incredible scenery justify the hike along Old Coach Trail between Radium and Dry Gulch.

The north end of the trail begins in the Village of Radium Hot Springs across Highway 95 from the Visitor Centre where a short walk south past Radium Plaza and the Cedar Motel leads directly towards the obvious trail tracking uphill and south between the golf course on the right and parallel to Highway 95 on the left.

Near the crest of the rise, vistas to the west begin to hint of the spectacular scenery to follow.

At the crest of the hill the north, beginning trail kiosk and signage may offer a paper Trail Guide which is important for greater appreciation of trail features.  Picking up a trail guide at the Visitor Center in Radium is a good idea in case the kiosk supply has been exhausted.

There are 8 major points of specific interest along the trail which are identified by numbered posts.

The first point of interest is the ancient shoreline of Glacial Lake Windermere when the valley was filled with water from receding glaciers 11,000+ years ago.

As the water drained away, the valley was sculpted, then weathered gradually to form hoodoos and the spectacular variety of ground features visible today.

Although, in ancient times, the land was occupied with large numbers of ungulates, their numbers are now diminished and the land sustains a wide variety of birds, small animals as well as deer, elk, curly-horned Rocky Mountain Bighorn Sheep, moose and bear.  The Columbia River Wetlands are protected as a Wildlife Management Area.

Following a short relatively flat stretch where expansive vistas over the Columbia River Valley capture the attention, a curling descent around sandstone bluffs enters dense evergreen forest which can provide welcome relief from the heat.

The crowded forest is the result of more than seventy years of fire prevention.  In many parts of the valley, fire management is being employed to re-establish open areas for habitat by many animals who prefer open ground for food and predator detection.

About halfway through the 9.3 KM (5⅞ mile) hike, evidence remains of early settlement in the form of a heritage ranch on the island across the river.  A tall log building, accessible only by stern wheeler, operated as a dairy in the early 1900's.

Past this point, a trail heading west from the road leads to a spectacular viewpoint over the Columbia River Valley.  The Purcell Mountains dominate the western horizon.

Over time, the river has provided transportation by boats before and after the railroad pushed through in 1914.  Today there is an impressive flotilla of colorful, recreational kayaks navigating their way downstream along the Columbia River towards Golden.

The venerable beaver, in a constant state of construction, creates and modifies the vast areas of wetland habitat essential for amphibious life and the wide population and variety of avian and small animal species.

Continuing towards the south end of Old Coach Trail provides hiking trail alternatives along the west edge of the bench lands.  These trail alternatives, accessed by trail branches from Old Coach Road offer sustained and superior views over the spectacular Columbia Valley where eagles soar gracefully in gentle breezes above the river and wetlands.

The beauty is so profound and mesmerizing that stopping to absorb the splendor often results in forgetting to proceed.

Past the stand of ancient Douglas Fir trees the trail passes through the legacy of an old Christmas Tree farm.

Eventually, the trail complex provides the opportunity to branch left back to the terminus of the Old Coach Trail at the Dry Gulch southern terminus parking area.

When the Old Coach Road was restored by collaborate effort from local residents, contractors, local business and agencies, one of the major challenges included removing old cars and metal debris from trail beds along the old transportation route.

While most of the debris was removed, some off-trail remnants remain in difficult to access and isolated areas.  The following photographs will hopefully alleviate the need to risk rummaging through difficult off-trail terrain.

The Old Coach Trail is worth the time.  The experience can be an 18.6+ KM (11⅝+ mile) effort consuming half a day on bicycle or a hike that will require a full day to adequately absorb the history and discover the spectacular beauty of this multi-layered hiking experience.

Kudos to the people who worked together to make this fascinating and incredibly diverse attraction available to the public.  Good job.  The south trail extension from Dry Gulch is eagerly anticipated.

The best way to show appreciation and repay the significant volunteer effort may be to protect and guard this incredible resource and experience by packing everything out and tidying where appropriate.

Photographs for this excellent hike are captured Thursday, August 11, 2016  and Wednesday, August 17, 2016 between the Village of Radium Hot Springs and Dry Gulch in the East Kootenay region of British Columbia, Canada.