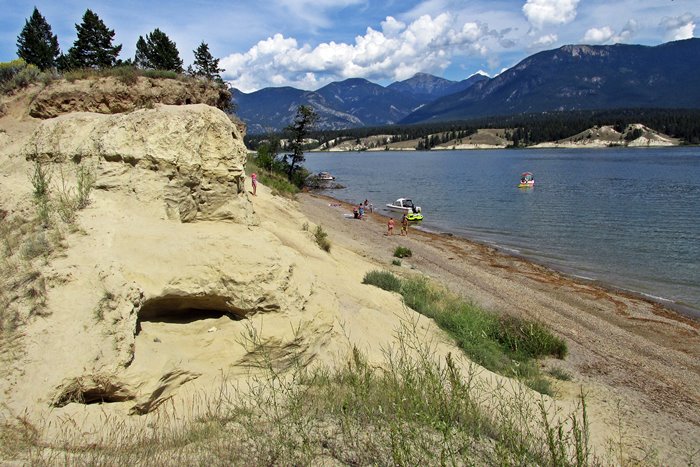 The printed instructions, obtained from the Invermere Visitor Information Centre on Highway 95 a short distance south from the turnoff into Invermere, states the entrance into Windermere Lake Provincial Park can be located on the east side of Westside Road about 10 KM (6¼ miles) south of the town of Invermere, British Columbia, Canada.

The drive into Invermere is a well-signed turnoff from Highway 95 which curls and sweeps downhill across the major bridge over the Columbia River before passing a business / industrial area and Panorama Drive uphill into the quaint and very attractive main street of Invermere.

Westside Road is achieved via a right turn at the stop sign to a left at 13th Avenue and past the school and CastleRock.  Not knowing where the 'about 10 KM' begins creates a problem driving along Westside Road from Invermere.

On the very pleasant drive south under sunny, blue skies past forested SRL's at roadside (more later), the paved road passes a picturesque pond on the right with tranquil water surrounded by beautiful wetland vegetation.

An estimated 2 KM (1¹⁄₃ miles) further south arrives at a location with an easterly unsigned entrance into an area more closely resembling the description provided by the handout sheet from the Invermere Visitor Information Centre.

A few parking spots and a fire pit with evidence of human activity are positive clues combined with two wide and well-established primitive, deeply-rutted roads, that could be considered trails, but what may have been signage on a tree has been rendered unintelligible by gun fire.

A short hike along the north leg of the road (trail) heading east seems less forested than expected and nagging doubt causes an about face to the car and a retreat drive to the previous location with the park boundary post.  Another car at the location reduces doubt.

Following a short, relatively flat walk on overgrown road through forest, a minor sloping descent arrives at another old road intersection where an deteriorating dugout may be evidence of a former basement.  (Could this be the remains of infrastructure from the old Sunshine Ranch from whom the land was purchased in 1961 to become an established park in 1999?)

The old dugout is largely overgrown but still retains evidence of ancient wood and metal infrastructure.

The trail continues through forest towards clear blue sky and soon a more exaggerated down slope exits forest into expansive, open grassland with majestic mountains rising beyond Windermere Lake.

Clear trail winds it's way gracefully through the sweeping views of open grassland where the sunshine and aroma lifts the spirits as progress continues towards a wire fence on the far side which may limit further progress.

Wire fence offers passage through an old gate where, immediately beyond, a trench contains rail for the TransCanada Railway.  To the right is a pristine wetland beside the railway with a wide variety of water plants and surrounding vegetation

The wetland appears almost too immaculate and beautiful to be real but birds and dragonflies add animation to the image.  The railway interrupts, but does not impede, forward progress towards shallow sandstone bluffs which border a pristine sand beach along the shore of Windermere Lake.

The small, very private beach, mainly accessible by boat hosts a few sunbathers and children playing on the fine sand.

To the right, water plants punctuate the surface to distract attention from the busy blue water corridor bordered by majestic mountains on the far side.

Shallow Windermere Lake is a widening of the mighty Columbia River.

The return hike is achieved via the same route used for access.

The truth is, this may not be the Windermere Lake Provincial Park although the website maps provided a higher sense of probability.

The other entrance which appeared to be a stronger possibility is shown in the photograph below.

Along the paved Westside Road route south from Invermere, there are several pullouts to small parking possibilities at SRL signs which punctuate both sides of the road.

Several people were asked throughout the day for the meaning of SRL but did not know the answer.  The Trail Society of BC website may be able to provide an answer.

My guess is that SRL stands for Shared Resource Land or Shared Recreation Land.

All that remains this day is the return drive to accommodation at the Village of Radium Hot Springs but Highway 95 is closed indefinitely due to a serious and tragic fatality accident involving multiple vehicles so an unplanned tour of Invermere can be added to this day's agenda.

The SRL program is administered and financed through the Nature Conservancy of Canada.

Photographs for this short, easy and scenic hike at Windermere Lake Provincial Park on the afternoon of  Sunday, August 14, 2016 south of Invermere, British Columbia, Canada.