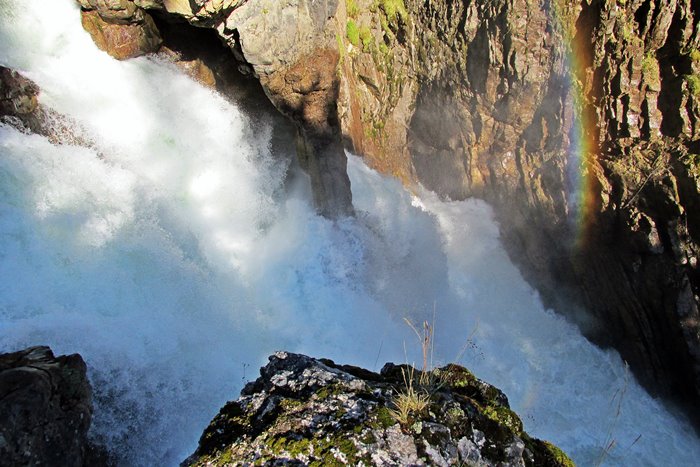 Access begins with a 26.5 KM (16⅝ mile) drive north from the Village of Radium Hot Springs on Kootenay Highway 95 to the small community of Brisco where a signed left turn from the highway leads past the bridge when the road splits at the rugged 50 KM (31¼ mile) access road into Bugaboos Lodge where world-famous and magnificent granite spires host breathtaking glaciers in the remote Bugaboo Mountains at Bugaboo Provincial Park.

The approach to Lower Bugaboo Falls continues on good gravel road after a right turn at this intersection and passes yellow kilometer markers until the gravel road merges with the Brisco Westside Road heading north.

Another 3.5 KM (2¼ miles) further passes the 8 KM marker and quickly arrives at a clearly signed pullout on the left with parking for a few small cars.  Trail beginning is signed and obvious.

Initial trail is quite civilized with occasional dead-fall to step over and early day sun tempers the cool forest to create fascinating shadows.  Minor elevation gain is gradual with flat sections for relief as the trail clearly assumes, then tracks, the top of the deep valley containing Bugaboo Creek on the right.

Occasionally there are fleeting glimpses of the white water below.  The sound of surging water gradually gains volume as the differential in altitude narrows between the waterfall and the trail.

The next opportunity is a right-side, off-trail diversion on rugged path which is obviously not maintained.

The primitive trail drops into occasionally aggressive descent over and under deadfall towards the bank of Bugaboo Creek.  This short and challenging trail option ends at shoreline of the rushing white water with clear views of, and sound from, Lower Bugaboo Falls a short distance upstream.

The images motivate the challenging return ascent to the main trail for a more aggressive pace towards the goal.  Escalating sound of the powerful waterfall prompts progress.

The final stretch of typical trail swings right into a heavily-forested final approach resembling a tunnel.  The roar of falling water motivates hiking the final short distance towards the sunlit objective.

Soon the roar of the 25 m (82 ft) waterfall becomes deafening as the end of the sound absorbing forest tunnel opens into clear views upstream and downstream along the roaring and frothing white water of Bugaboo Creek.

The approach hike is not complete.  The final few meters are breathtaking and will become indelibly memorable.  The backpack is removed to increase balance and reaction time, but also to remain as a permanent marker of solo presence and identification in the unlikely event everything goes swiftly to Hell in a hand basket.

The final few steps are taken on a slim, very wet and uneven promontory which extends out and over the narrow gap containing the constrained flow of roaring white, thrashing water embellished by dancing rainbows.

If this final jutting, thin sliver of slippery rock was named, something like 'Suicide Spit' might be appropriate.

Footsteps are tenuous over perpetually wet rock sporadically adorned with slippery moss.  Drama is enhanced with the obvious conclusion this thin wall may eventually be swept away by the force of the waterfall at some unknown future moment.

The rapid motion of the fast-moving white water plays mind games with foot and hand placement along the short journey to the end of the slender promontory.  A couple of small trees provide handholds on the careful approach to the end of Suicide Spit for dramatic image captures looking down into, and beyond, the powerful thrashing water.

Although walking out and back is carefully achievable, there would be no shame in crawling out on hands and knees.  This brief experience is a rush and a perpetually memorable moment.  WOW!  WOW!  There is a sensible but moot argument for the use of rope and harness.

This waterfall and its unique approach would be even more dramatic in Spring runoff.

Retreat from the tenuous, thin promontory is equally cautious with every footstep placed and tested before weight transference.  The feeling of elation is truly enjoyed after return to safe and stable ground.

The advantage of solid ground and singular presence promotes the opportunity for a robust cheer of victory and some mild dancing.  Being alone makes this substantially less embarrassing and perhaps more rewarding with a dash of stupid.

The backpack is restored to its rightful location for retreat to the car.

The return hike through dense forest over good and familiar trail is swift and buoyed by a sense of adventure and achievement.

My singular car in the small parking area provides the opportunity to drive the short distance back to the hamlet of Brisco where an eye-catching, old, white church with steeple enhances the character and magnificence of the spectacular natural surroundings prior to the return drive to accommodation at the Village of Radium Hot Springs.

There remains time in this day for a wander on the now familiar and prominent, hoodoo-adorned Brown Hill which stands stalwart over Sinclair Canyon and the village.

Photographs for Lower Bugaboo Falls are taken on Friday, August 12, 2016 west of Brisco off Kootenay Highway 95 north from the Village of Radium Hot Springs into the East Kootenay region of British Columbia, Canada.