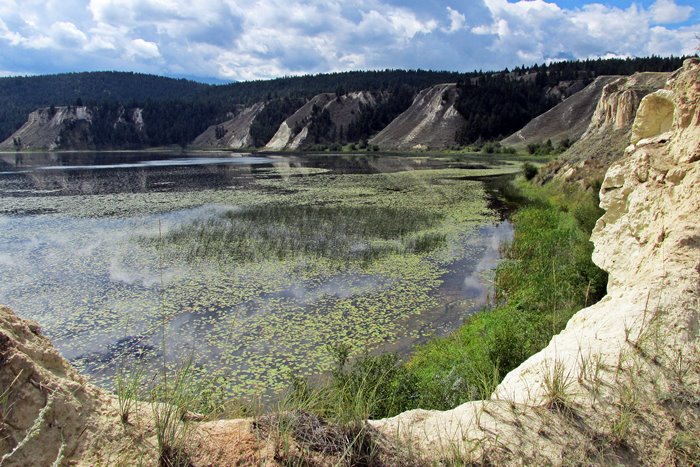 The hike into the Wilmer National Wildlife Area begins from a gravel parking area following the drive from Kootenay Highway 95 exit into Invermere.

After crossing the railway bridge over the Columbia River, a right turn at the lights onto Panorama Drive crosses Toby Creek and continues right past Kootenae House towards Wilmer, British Columbia.

The right turn in the historic community of Wilmer onto Main Avenue continues north through the historic town and soon becomes gravel road over gradual ascent.  About 2 KM north of Wilmer, an obvious parking area on the east (right) side of the road will reveal the trail signage and boulder barriers guarding this well-used trail.

The 3 KM (1⅞ mile) hike descends over gentle, relatively consistent elevation from the trailhead to incredible views near the end of the peninsula.  Just inside the cattle guard there is an option left or right.

The right branch travels across a short, plank bridge over a drainage ditch for a brief walk and overlook from sandstone cliff edges to wetlands and mountains looming over the east edge of the Columbia River Valley.

This is only a hint of the main event where, back at the cattle guard, the main trail to the left begins the fascinating descent towards the end of the narrowing peninsula.

Wilmer Wetlands are a protected wildlife refuge so staying on established trail is important.  Bicycles are not allowed here.

Back at the cattle guard, the alternate high quality trail begins the walk along and down the peninsula.

The obviously popular trail is occasionally braided where trail braids offer a variety of incredible scenic options over the amazingly rich and diverse vistas of the Columbia River Valley.

About halfway along this route, the main trail veers along the left side of the peninsula into a forested area which provides views of the lily-pad-covered bay beneath and relief from the heat of the sun.

This diversion along the left side of the ridge provides incredible views around and past sandstone formations to bays on both sides covered with thousands of brilliant green lily pads floating rhythmically on the water's surface.

Trail braids allow a variety of view alternatives as firm, sandy trail leads through the short brown grasses clinging to the surface in nearly desert-like terrain.

Occasional views down the ridge towards the end point serve to motivate progress as descending trail elevation approaches the mirror surface of water teeming with life.

The fragrance of newly oxygenated air is palpable and energizing.

Exit from the forested area returns to the roller coaster top of descent along the cascading hills on the continuing journey to the end viewpoint.  Sweeping vistas expand to nearly 360 degrees and encompass a massive portion of the Columbia River Valley.

The scenery is rich and awe-inspiring.  Forward progress is challenged by the need to stop and take in every new view of this unfolding paradise.  A steady productive pace here would be a flaw.

At end of trail, the spectacle is all encompassing with distant views of sandstone bluffs backed by magnificent mountains across the rich and diverse plains of water plants emanating from, or floating on, perfectly still water.

The paradise stretches as far as the eye can see from this nucleus of profound and spectacular beauty. Occasional, almost imperceptible breezes complete the absolute assault of all the senses plus one or two previously undiscovered.

There is a powerful motivational force to stay - forever.

Leaving this nirvana is difficult.  To be here alone is likely unusual and a great gift to be recalled forever.

After every second of available appreciation time is exhausted, the return hike begins on gentle ascent over the sandstone mounds with the reverse views no less spectacular than those experienced on the way down.  Reluctance to depart slows the pace and swivels the head to experience every possible view on exit.

Not to be outdone, even fluffy clouds above drift dramatically displaying their gentler and more aggressive postures in a desperate bid to compete and be noticed.

There is evidence of trail below at waterline and there are a couple of descent points where the alternate route could be achieved on more aggressive descents. This trail, under favorable conditions, is one of those which will likely remain forever memorable.

The overwhelming scope and magnificence of the views from the end of the peninsula are spectacularly encompassing with scope and diversity seldom seen.  Highly recommended when the opportunity arises and a grand hiking day when combined with Lake Enid and a walking tour of Wilmer.

The Wilmer Wetlands trail has been mine alone this day and that is likely an uncommon gift.  The nature of the trail composition would likely make the route slippery and possibly treacherous during and after sustained rainfall.

Accompanying photographs of the incredible Wilmer Wetlands are captured in the afternoon of Thursday, August 11, 2016.