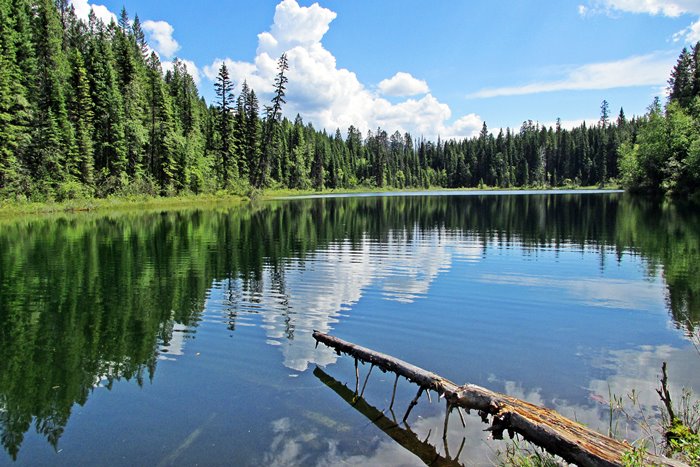 Near Paint Pots, the highway curls to south-east  then morphs to south-west again near the Mount Wardle Animal Lick before a southerly route to a sharp, high-altitude left turn occurs at the Kootenay Valley Viewpoint where reduced speed and major focus becomes important for the preservation of life.

Highway 93 is excellent quality and well-maintained road through spectacular, challenging terrain on an inverted dog-leg shaped highway that heads south for a significant distance before making the sharp turn to the west at Kootenay Valley Viewpoint en route to the Village of Radium Hot Springs.

The trailhead for Cobb Lake is a sharp, left turn across eastbound lanes on the downhill immediately after the severe turn at Kootenay Valley Viewpoint.  Full attention is expedient.

From the obvious trailhead sign, the excellent quality trail falls into immediate descent onto well-graded switchbacks through heavy forest of Lodgepole Pine and White Spruce with the occasional massive Douglas Fir giant which stand proud as a survivor of the 1918 Kootenay Valley Forest Fire.

The forest floor is saturated with a wide variety of ground cover and moss.  Blowdown has created a matrix of artistic, sculptured framing throughout the forest prior to arrival at the plank bridge crossing over tiny Swede Creek at valley bottom.

The Cobb Lake trail continues past Swede Creek to ascend the other side of the valley on switchbacks owned by 2,662 m (8,734 ft) Mount Sinclair which has been magnificently visible looming above through the trees during the initial descent from the parking area.

Trail narrows and flattens as foliage density increases to near jungle-like proportion.  The richness of the aroma is soothing and overwhelming as a patch of sketchy and wet trail becomes the precursor to arrival at the shoreline of Cobb Lake.  The surreal imagery is breathtaking beautiful.

Cobb Lake is small with a reflective surface which amplifies the beauty.  Water is so clear, lake bottom features appear perfectly visible.  Nearby rustic path along the lake shore allows the opportunity to explore more of the shoreline.

Quite frankly, photographs which follow reveal only snippets of the magnificence achievable by personal presence.

The return hike from Cobb Lake to parking is via the same route taken in.

The Cobb Lake hike is about 5.5 kilometers (3⅜ miles) return but it is worthy to note the popular hike descends from the highway at 1,410 m (4,626 ft) to Swede Creek more than it ascends from Swede Creek to Cobb Lake so it is best to be emotionally prepared for a more extended, aerobic ascent on the return hike.

Elevation gain and loss is not major and this casual half day hike is more than worthy of the effort.

The Cobb Lake hike is a bit more aggressive than the Dog Lake hike.  Both hikes can be easily enjoyed on the same day with a reasonable morning start.