One of the two Fireweed Loop trails is wheelchair friendly at the Continental Divide on the Alberta, BC border. 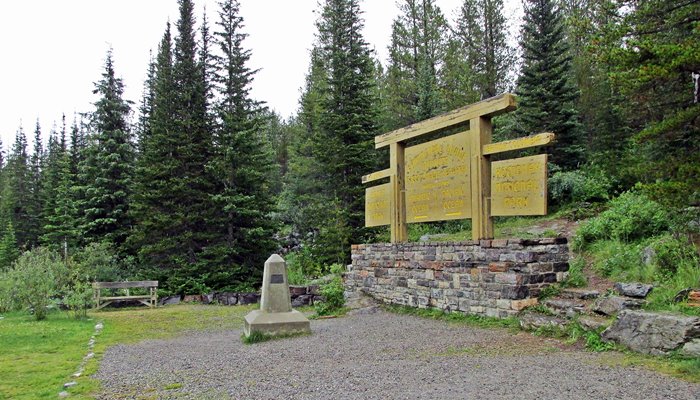 Highway 93 South, is west of the Town of Banff along the TransCanada Highway where the iconic Bow River and Castle Mountain dominate the clearly-signed intersection heading south to the Village of Radium Hot Springs in British Columbia, Canada.

Within a few minutes of breathtaking ascent on twisting, mountain-bordered highway, the historically significant Storm Mountain Lodge provides the opportunity for a leg stretch, refreshment and a picturesque stroll through history.. 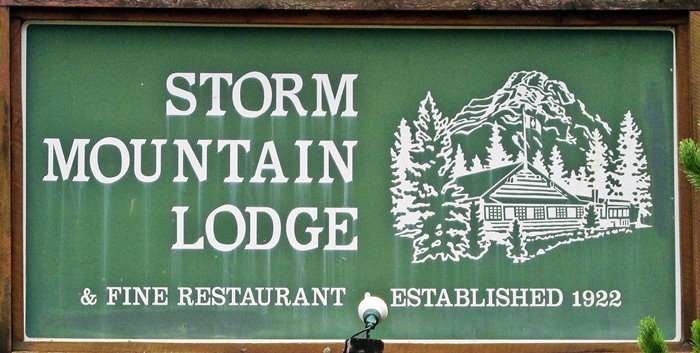 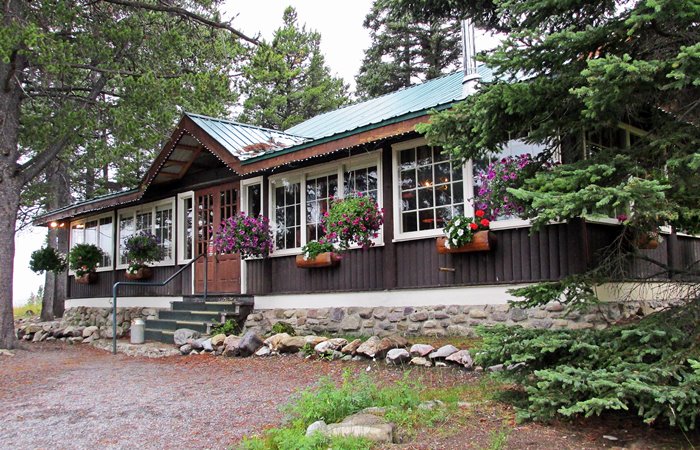 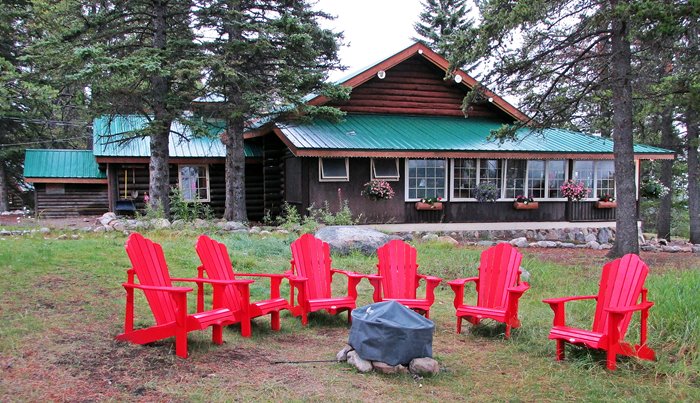 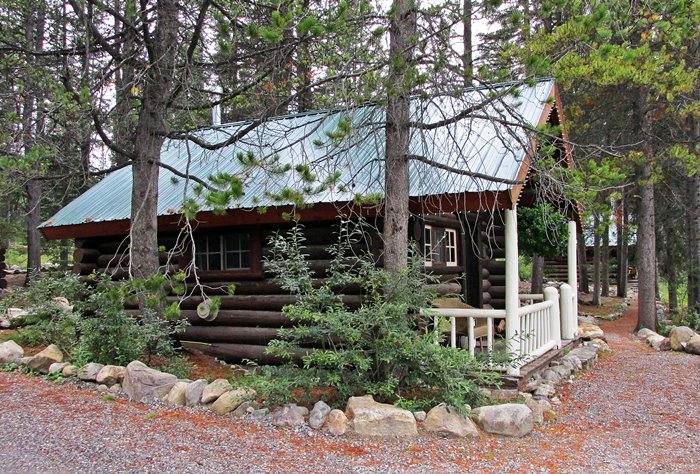 An expeditious and perfectly-timed, cautious crossing of Highway 93 from the entrance road to Storm Mountain Lodge leads to an informative historical marker and spectacular views over the impressive valley framed by cloud-clipped, towering mountains with picturesque Altrude Creek flowing through the bottom. 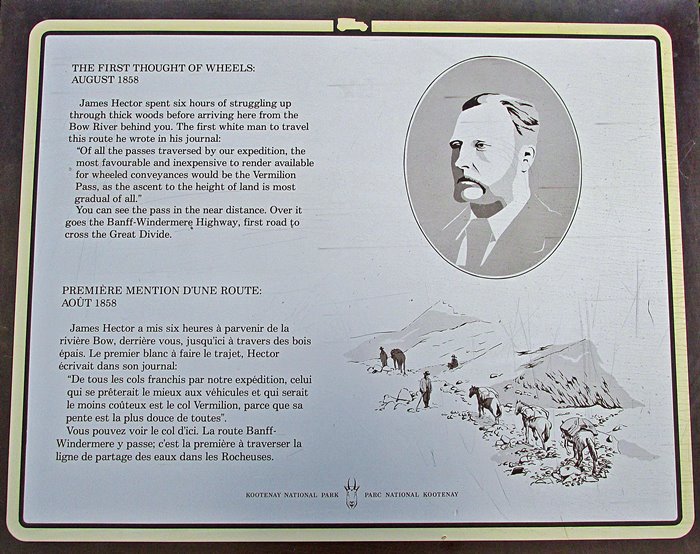 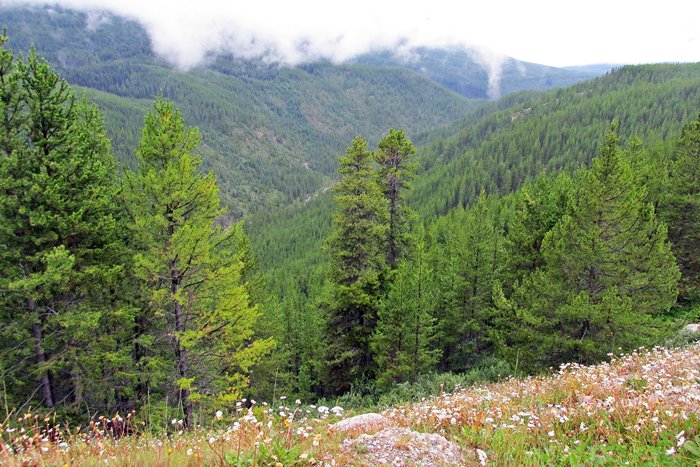 The continuing drive, predominantly west and a bit south, passes trail-head parking for popular mountain-surrounded Boom Lake followed by imminent arrival at the Vista Lake Viewpoint which is definitely worth a stop.

The parking area and lofty viewpoint provide impressive views below of Vista Lake plus the crystal-clear and emerald green waters of the canyon-surrounded Altrude Lakes.

The roadside Vista Lake Viewpoint parking area location is also a popular trail-head for hiking downhill to Vista Lake at 1.4 KM (⅞ mile), and beyond on the Arnica Lake Trail to Arnica Lake at 5.1 KM (3¼ mile) or Upper Twin Lake at 7.4 KM (4⅝ miles). 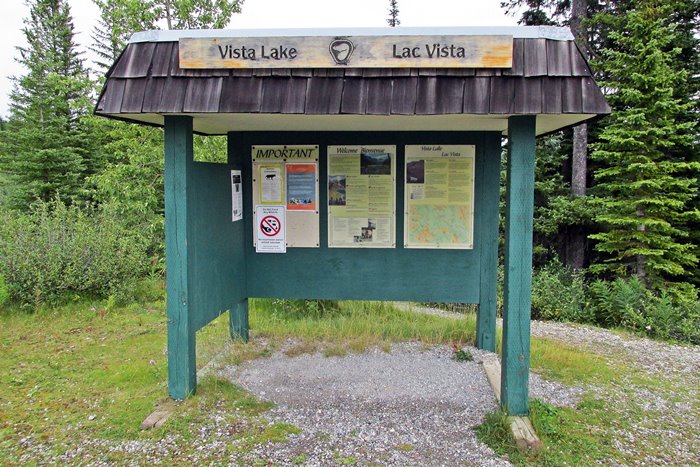 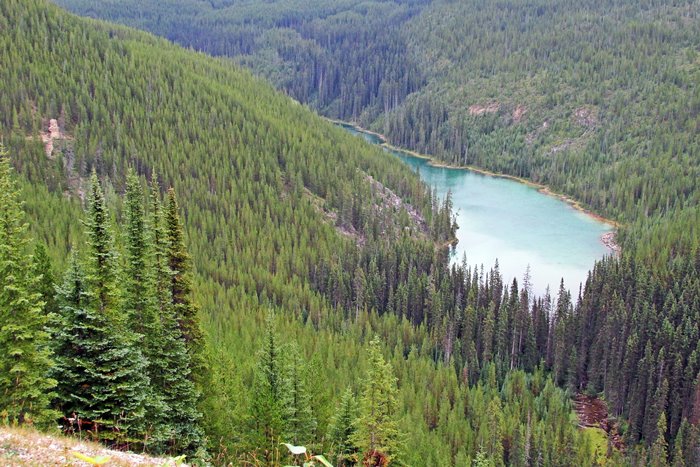 On this day, a light drizzle begins.  Rain that lands on the Alberta side of the Continental Divide flows to Hudson Bay via the Bow, Saskatchewan and Nelson rivers.

Rain landing on the west side of the Continental Divide in British Columbia flows to the Pacific via the Vermilion, Kootenay and Columbia rivers.

Three flags for Canada, Alberta and British Columbia straddle the Divide and a survey maker with signage provides reassurance the human body can be present in two provinces at the same time.

Less impressive than Four Corners perhaps but still a good photo op with captions like 'standing in two huge provinces at the same time today'. 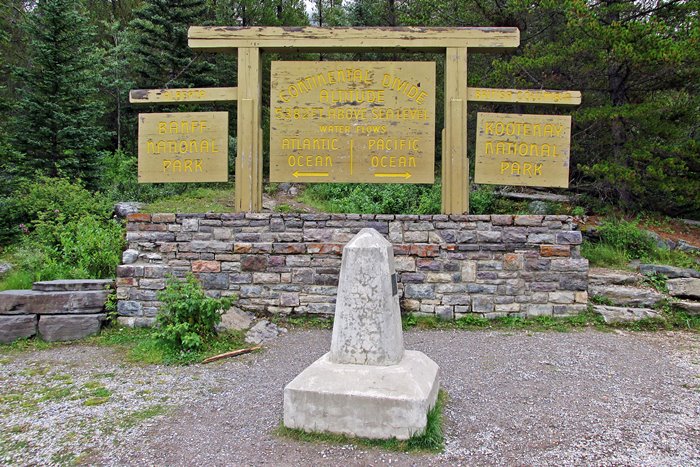 The survey marker at the Alberta, British Columbia border in Canada 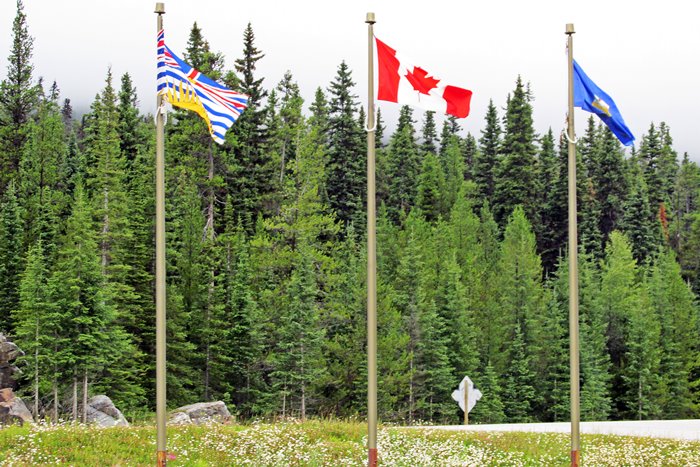 The British Columbia, Canada and Alberta flags at the Continental Divide

On this day, the short access trail from the parking area to the trail-head could be considered narrow and challenging for the short access to the well-groomed and wide wheelchair-friendly Fireweed Trail Loop.

The access trail from parking to the two Fireweed Loop Trails

The trail interprets the aftermath of the 1968 Vermilion Pass Burn which remains visually evident along Hwy. 93 forty years following the significant event which consumed an estimated 2,630 hectares (6,500 acres) of 300-year-old forest.

In 1968 a lightning bolt triggered the eight-day July blaze on the southern slope of 2,845 m (9,334 ft) Mount Whymper in the Upper Vermilion River Valley across Highway 93 from Stanley Glacier.

The short access trail seems a bit narrow for wheelchairs.

The short access trail leads through a wildflower border and past overview interpretive signs to the clearly signed junction for the short, flat, wheelchair-compatible, interpretive loop on the right and the longer, more rugged loop to the left.

Past the large and colorful entrance sign, the interpretive plaques '8 days in July' and 'Sunlight and Ashes' set up the story to be told along the lower Fireweed Loop Trail. 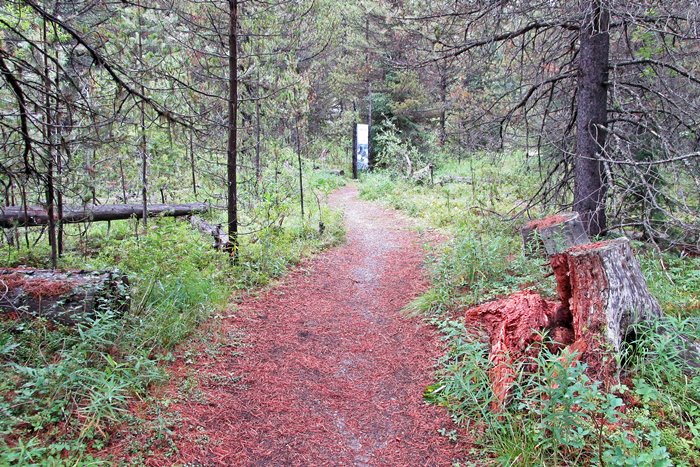 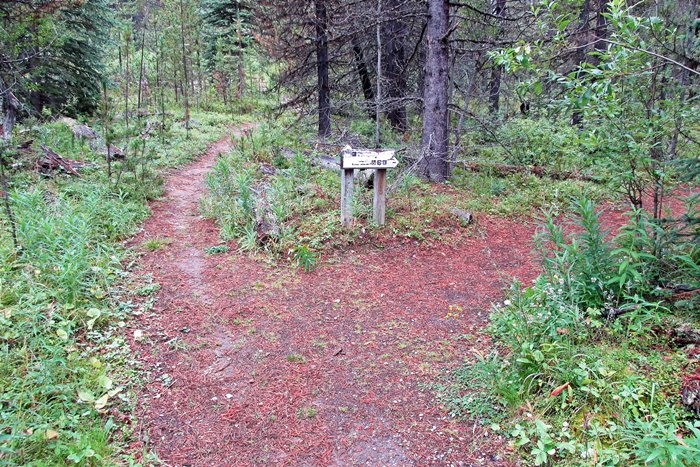 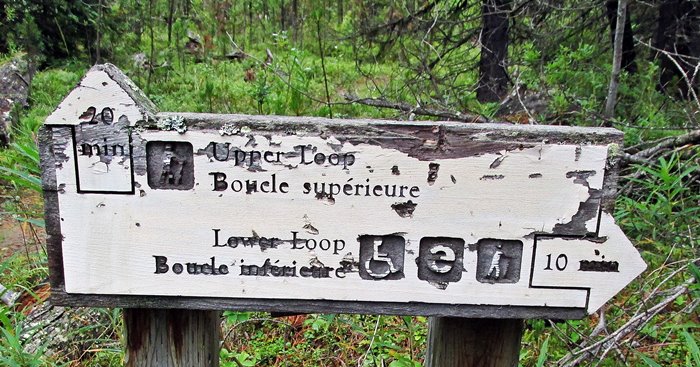 Estimated time to complete the lower loop is 10 minutes.  It might be sensible to drag it out and absorb the ambiance and interpretive information.  The damp forest is extra aromatic today.

Breathing deep relaxes the body and mind and boosts the mood.  The wide and flat single trail thread leads to the junction where the lower loop begins to the right.

Well-manicured trail continues past the interesting interpretive signs about the value of a forest fire and the process of renewal and recovery.

The interpretive plaques are titled 'Nature's Patchwork', 'Learning from Nature', 'Out of the Ashes' and 'Wildlife in the Burn' before the loop returns to the sign at the beginning of trail junctions. 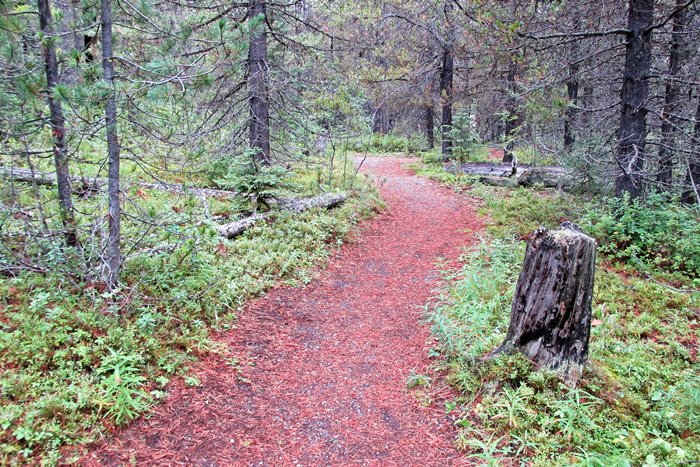 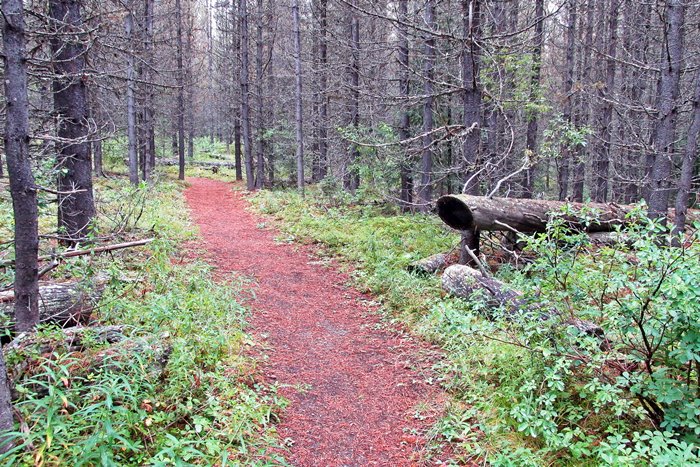 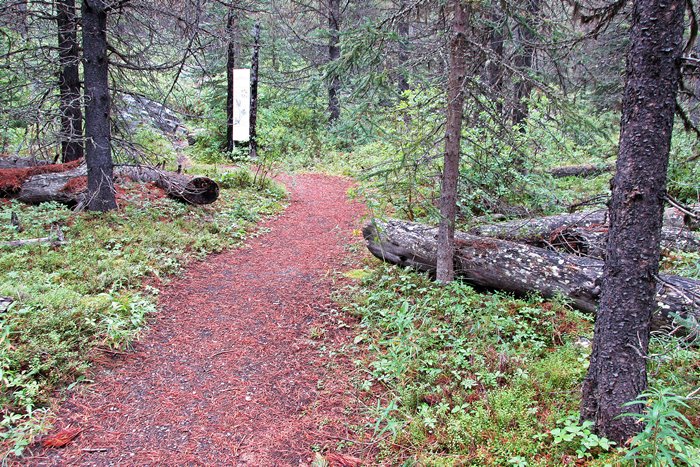 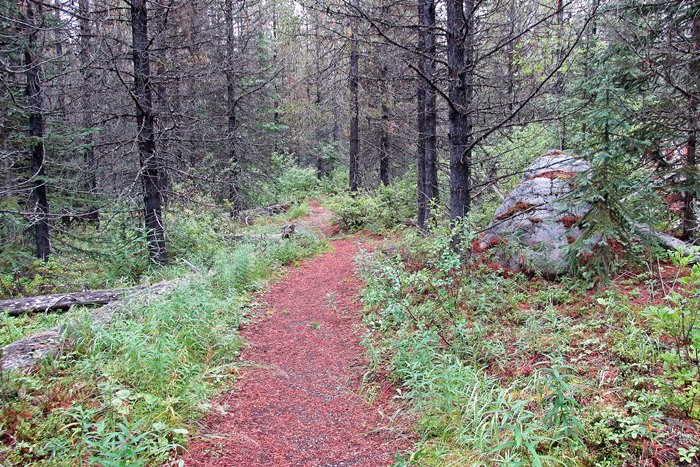 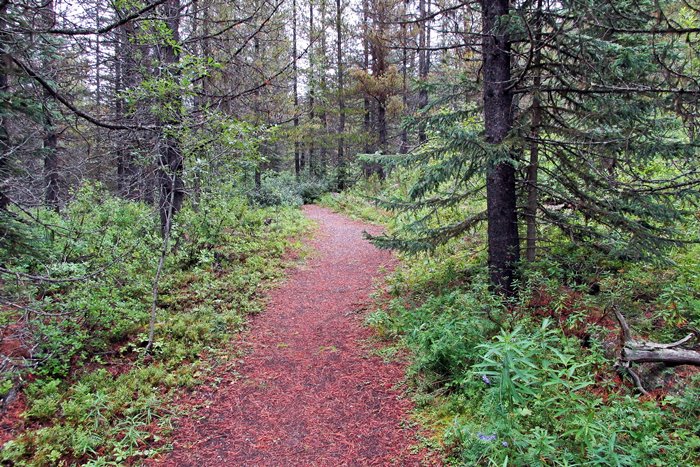 The longer and upper Fireweed Loop Trail is definitely not wheelchair compatible.

Fireweed is a colorful, pink-flowered plant which is often among the first to grow after a forest fire with the tendency to create dense and dramatic fields of color nearly two meters (six and a half feet) in height against the stark, blackened appearance of the devastated forest.

The trail returns to the parking area and the Continental Divide exhibit.

Photographs at the Continental Divide, 10 KM (6¼ miles) south of Castle Junction in Banff National Park or 95 KM (59⅜ miles) north of the Village of Radium Hot Springs which is just beyond the south boundary of Kootenay National Park, were captured on Monday, August 8, 2016.