Fort Calgary, at the confluence of the Elbow River with the Bow River, became the first NWMP post in Calgary, Alberta, Canada. 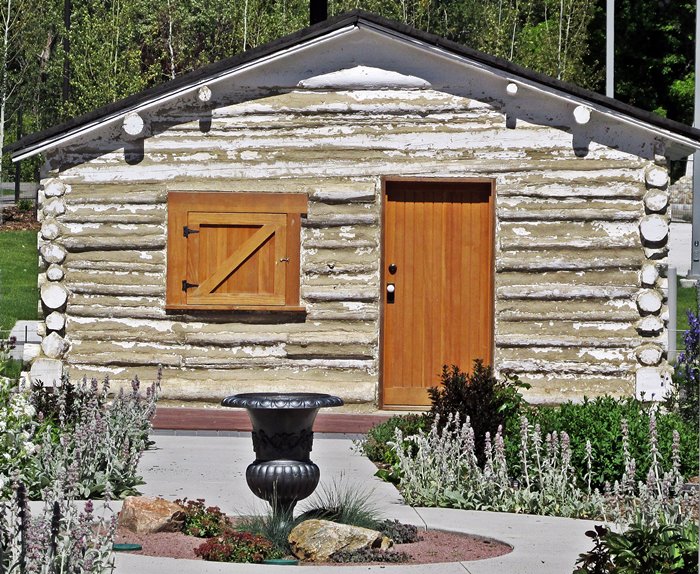 Significant development in recent years has created a world-class exhibit where the Elbow River meets the Bow River in Calgary, Alberta, Canada.

The Sentinels stand bright and stalwart at the corner of 9th Avenue, SE at 6th Street.

The tall, gleaming towers augment superb landscaping and subsequent signage along the periphery of the original location for the North West Mounted Police installation at Fort Calgary established in 1875 following lawlessness and the atrocious Massacre at Cyprus Hills in August of 1873. 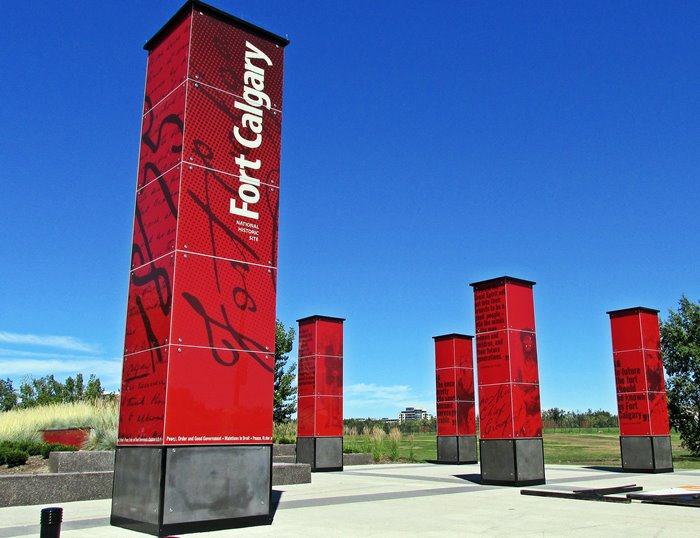 A small stone pyramid-shaped monument near the ample parking area denotes Fort Calgary as a National Historic Site of Canada recognized in 1925.

The bright red entrance sign identifies the location of the entrance to the well-appointed museum. 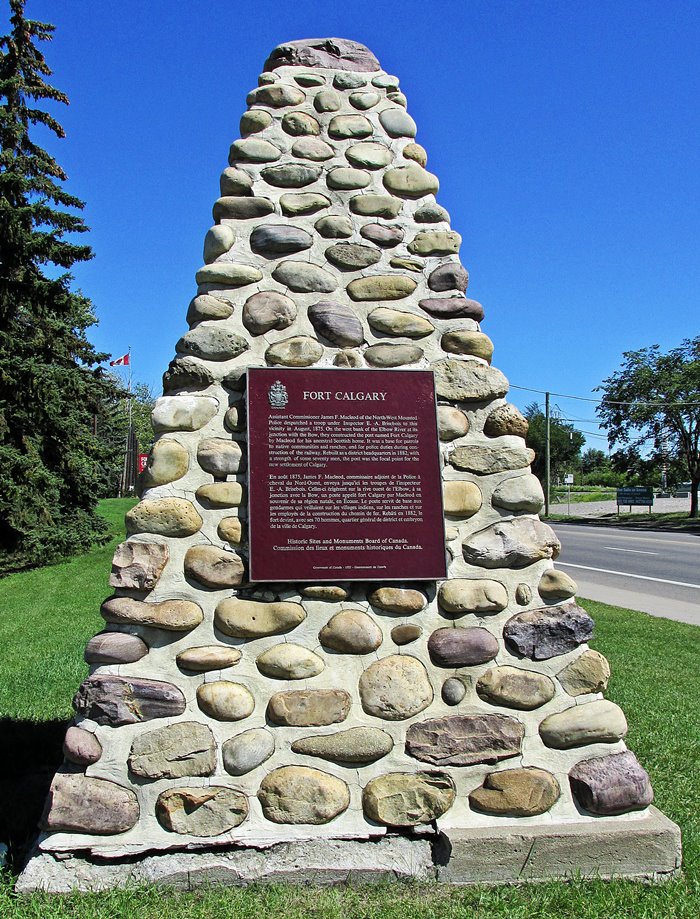 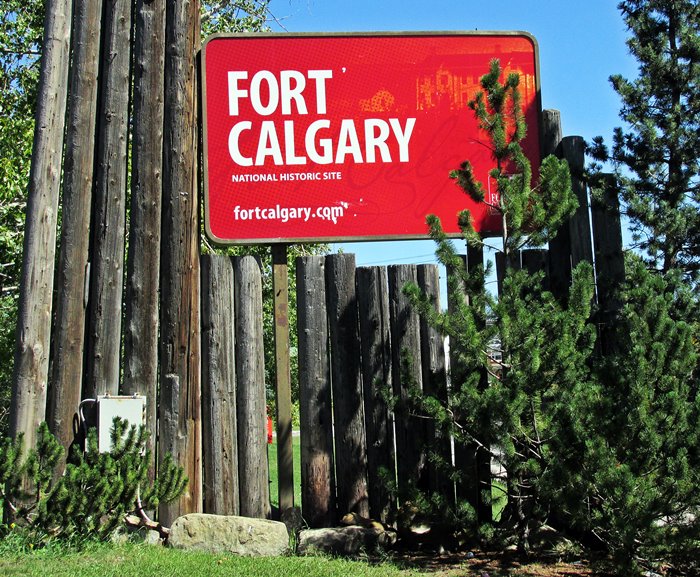 En route from parking, the bronze statue of Colonel James Alexander Farquharson Macleod, Commissioner North West Mounted Police, 1876 - 1880, captures the attention in a prominent position between the original location of Fort Calgary established in 1875, and the recreation of the 1888 - 1944 NWMP Barracks which shares the entrance to the Fort Calgary Interpretive Centre constructed in 1977. 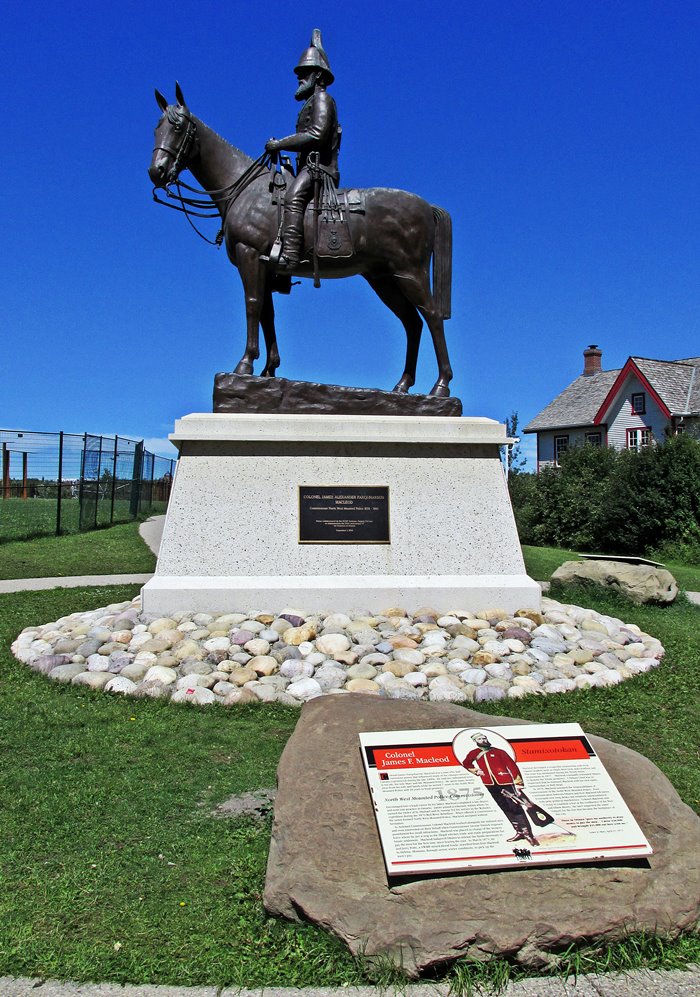 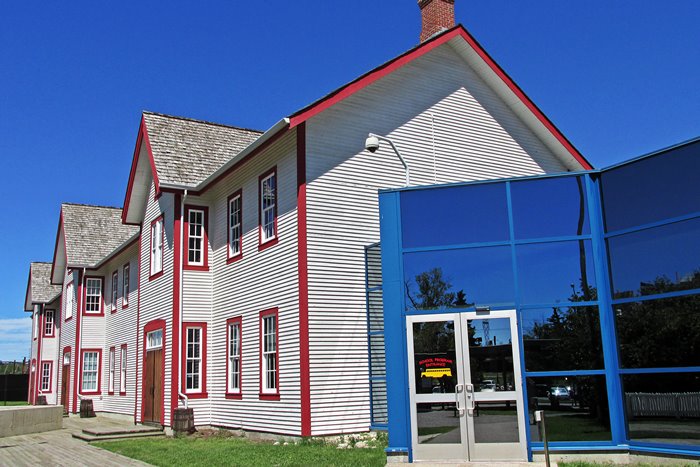 There is a reasonable admission charge to a wide range of carefully constructed period exhibits which provide a wealth of information about the fascinating history of early life in Calgary.

In the recreated 1888 barracks building, a circuit of summary information posters proceed in a clockwise direction to provide insight into Calgary's development from 1873 to nearly current.  There are scale models of 1875 Fort Calgary and the 1914 Barracks. 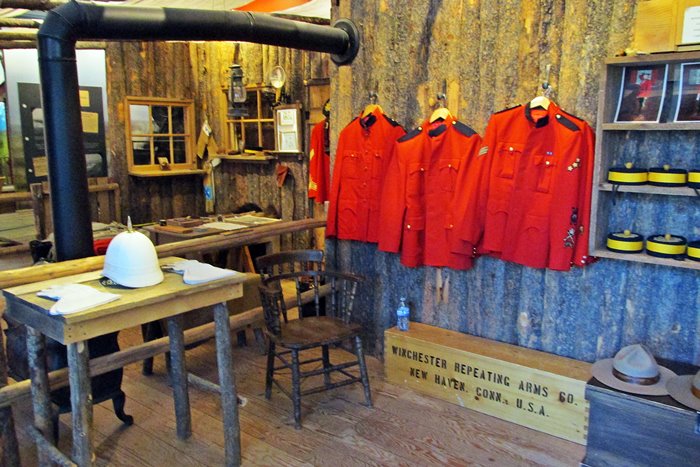 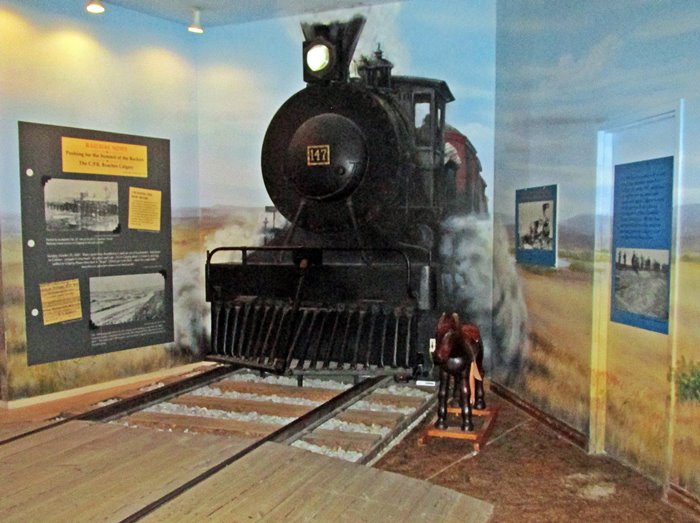 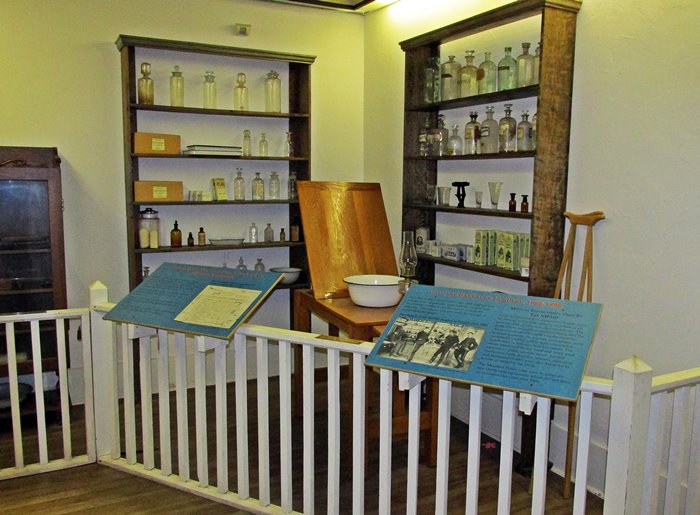 The meticulous organization of artifacts and information far exceeds any feeble attempt which could be written here to encompass the volume of fascinating detail.

The experience is an enlightening and humbling journey through far different times. 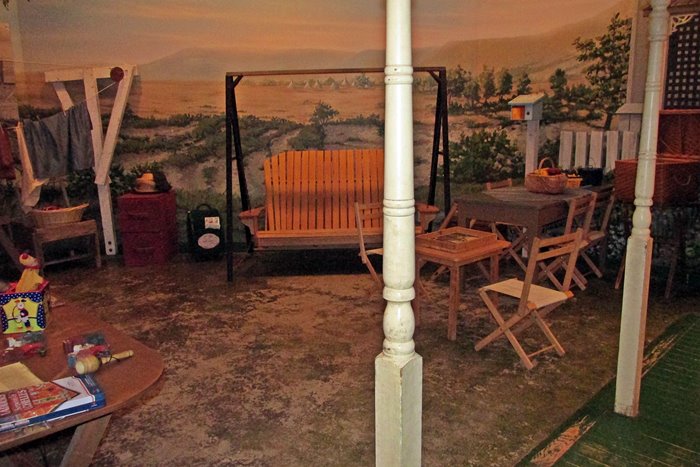 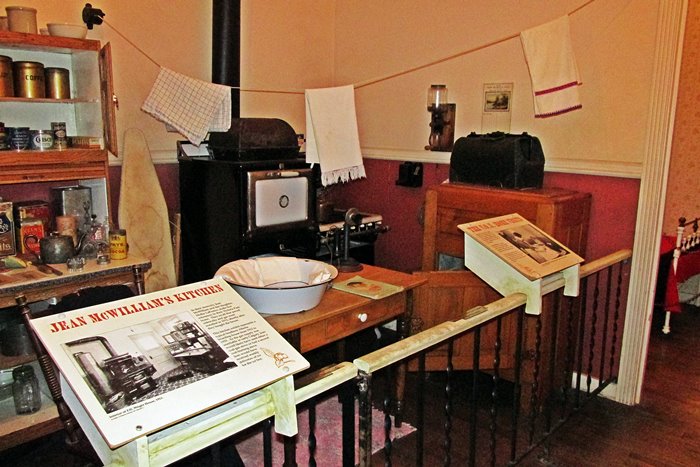 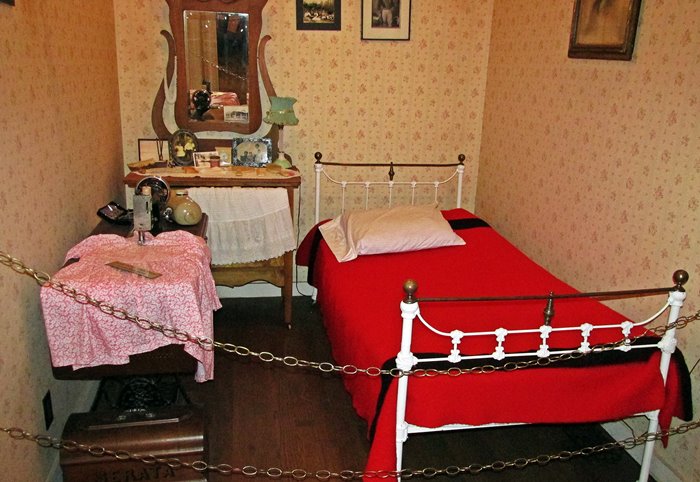 Pioneer dwellings and history provide a glimpse into early life in Calgary. 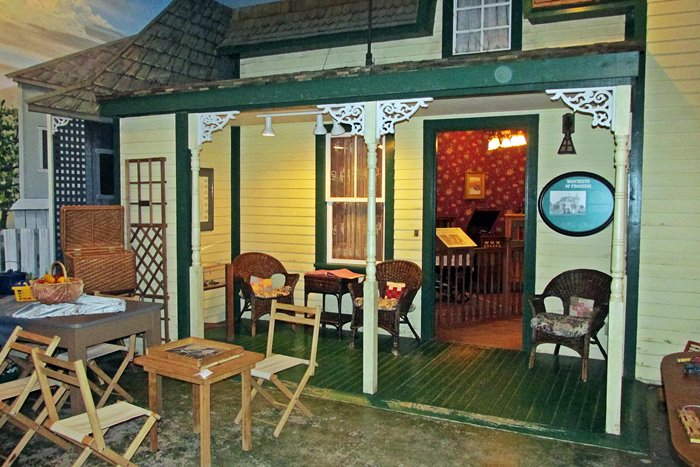 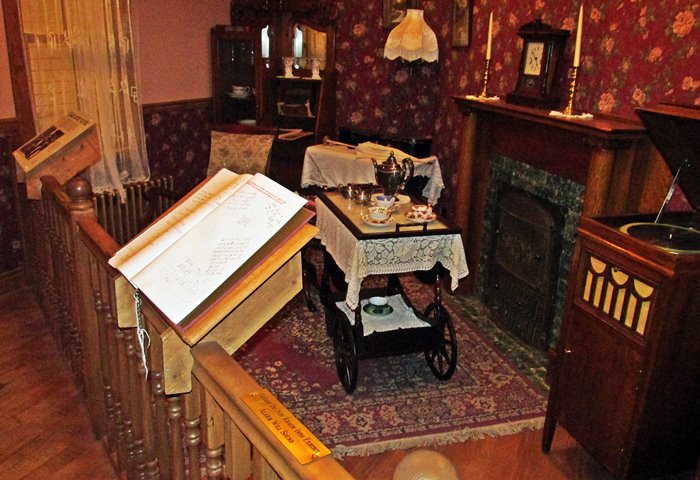 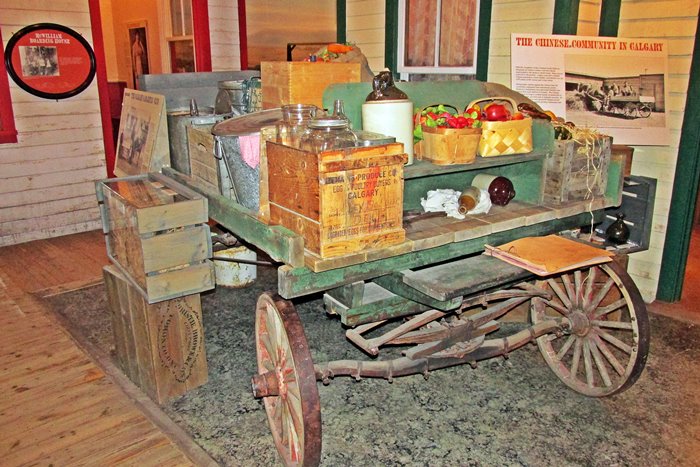 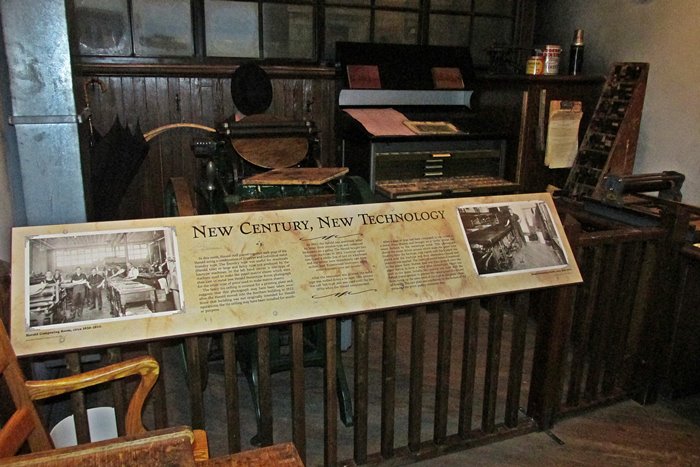 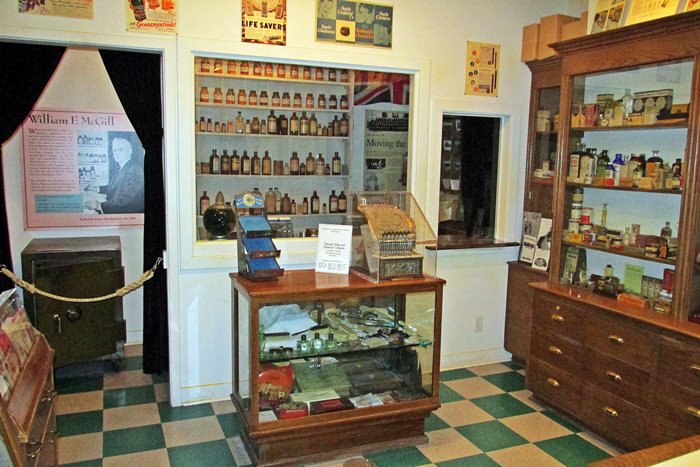 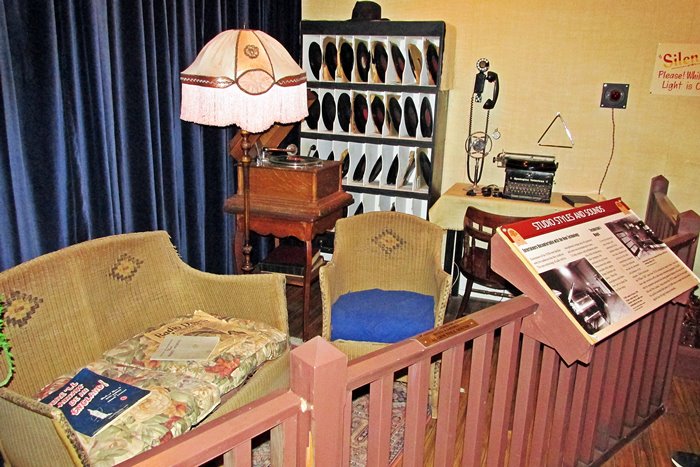 To continue the discovery of early Calgary history near Fort Calgary, the self-directed walking tour leaves the building for a short walk east along 9th Avenue, SE, past the bronze buffalo and across the Inglewood Bridge spanning the Elbow River.

The historic Inglewood Bridge is scheduled to be replaced soon. 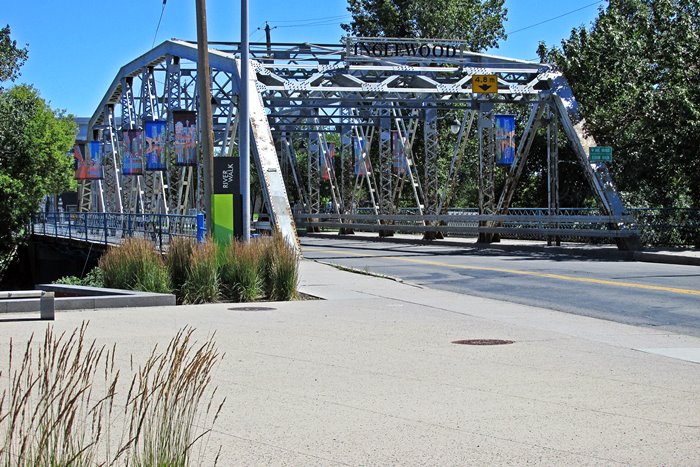 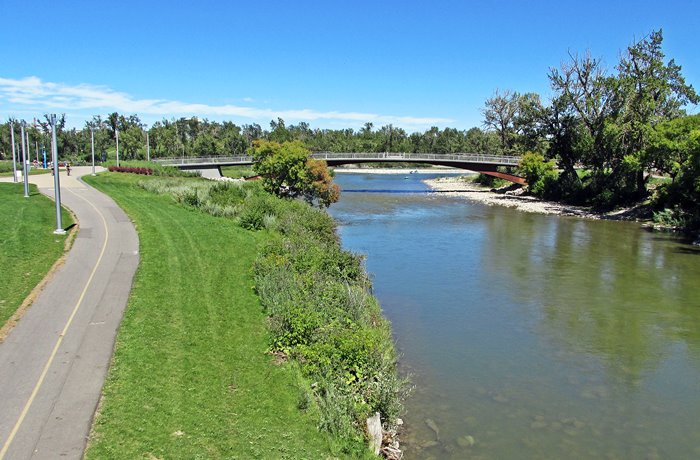 The Deane House was constructed in 1906 for Captain Richard Deanne, Superintendent of Fort Calgary, originally on land near 9th Ave and 6th St SE.

In 1914, the Grand Trunk Pacific Railway bought the land to use as a rail terminal and demolished all the fort buildings except Deane House. The house was first moved to the southeast corner from its original location before being purchased again in 1929 by C. L. Jacques and moved across the Elbow River, onto the current location.

The house was used as a boarding house for several decades until the City of Calgary purchased the building to become first an art gallery and then a restaurant and dinner theater.

Currently the building is fenced off  for renovation along with restoration of Hunt House.  Hunt House is the only building from the era which remains on its original foundations. 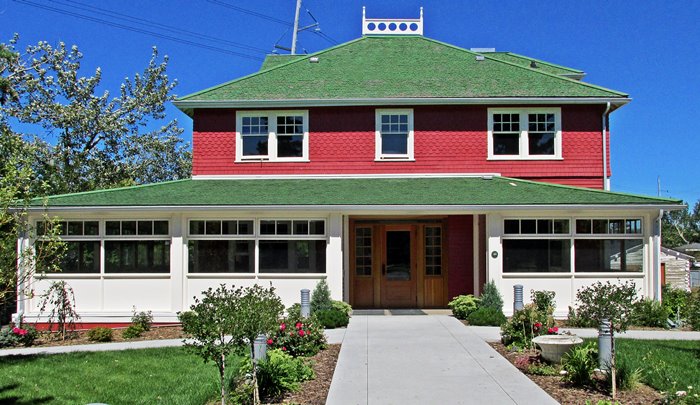 Deane House above and Hunt House below

The circuit around the block leads around Deane House and Hunt House to pathway passing the NWMP Statue and proceeding over the Elbow River to the colorful and abundant Community and Prairie Garden.

As an aside, it is worth the time to stroll north on the Riverwalk a short distance towards the Bow River to examine the new exhibit 'Where the Elbow Meets the Bow'.

The outstanding architecture and landscaping in this area is impressive and deserves to be investigated and enjoyed.  The ambiance is truly spectacular and more than worthy of a visit.

And, you will discover what happened to Goose Island. Where did that island go? 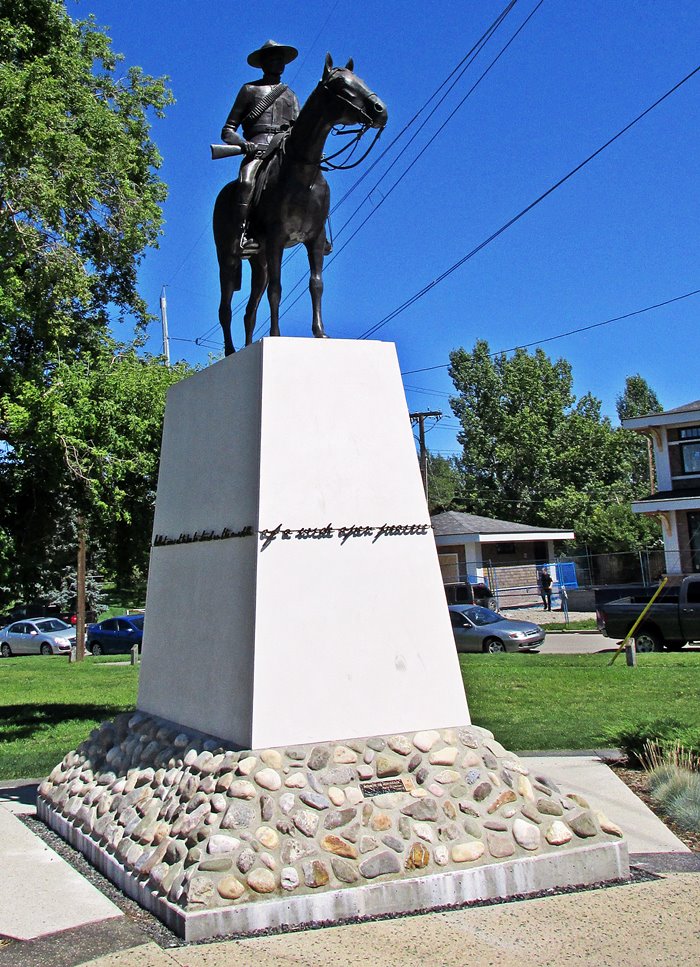 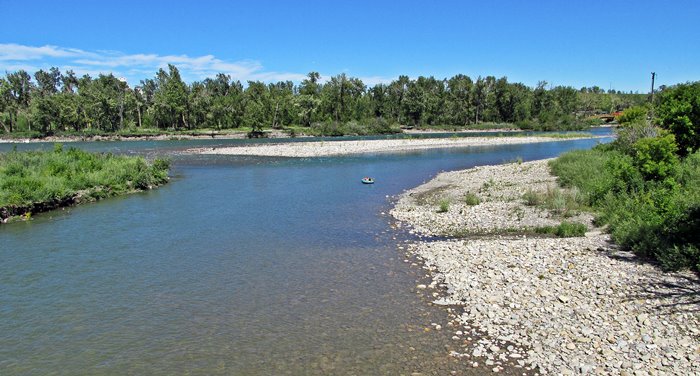 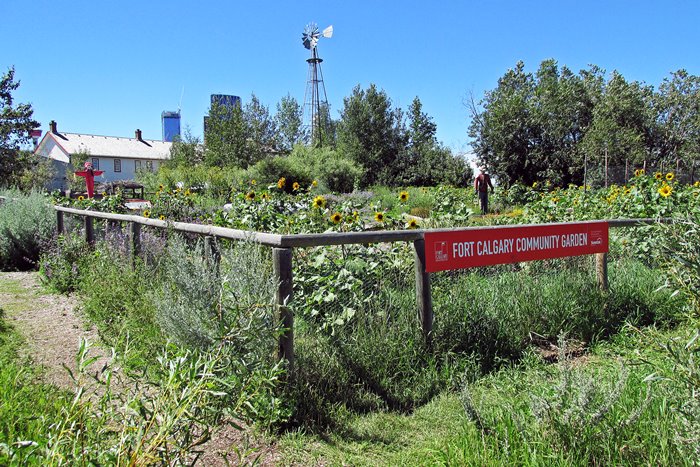 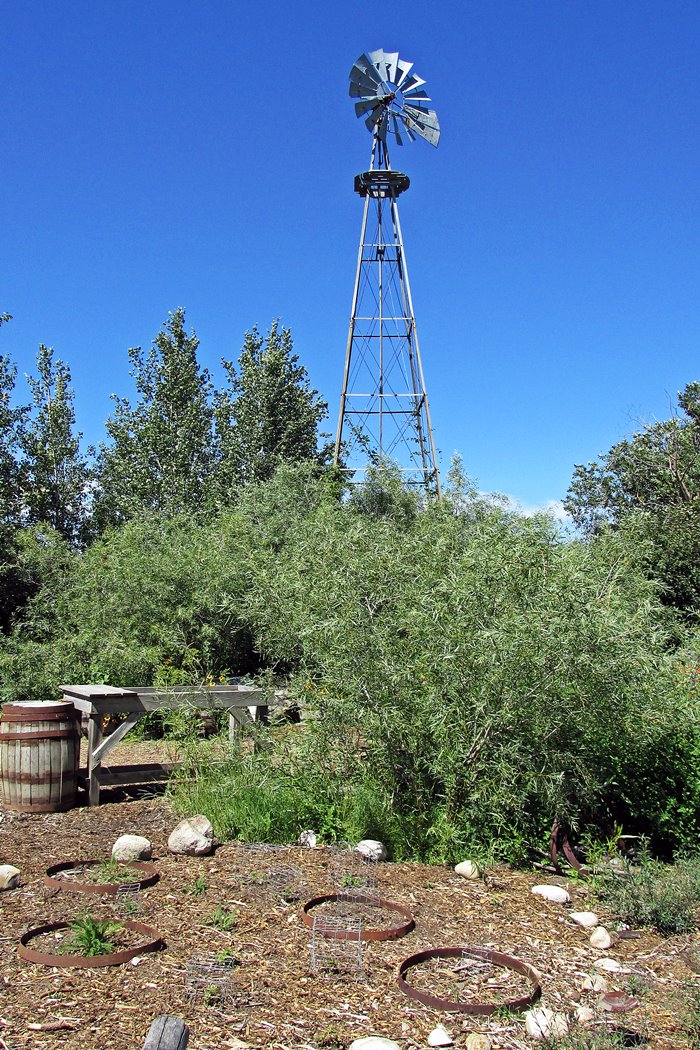 Community and Prairie Garden with Windmill

In 1969 – 1970, a  University of Calgary archaeological crew began searching for the original Fort Calgary near the site of McCosham's warehouse.

Evidence of the original Fort Calgary site was discovered beneath a storage yard behind the since removed McCosham's building.  Original wooden beams from the Fort were unearthed along with many historical artifacts.

The current interpretive site of the original Fort Calgary is fenced off and it would be a major coup if this site can be developed with an authentic replica of the original installation.

Photographs for this visit to the Fort Calgary National Historic Site and surrounding exhibits were taken on a bluebird day at the confluence of the Bow River and Elbow River in Calgary, Alberta, Canada.

Short, pleasant hikes at the Inglewood Bird Sanctuary and Inglewood Wildlands, combined with a casual tour of shops along 9th Avenue SE, and an afternoon tour of Fort Calgary creates an amazing and educational day.