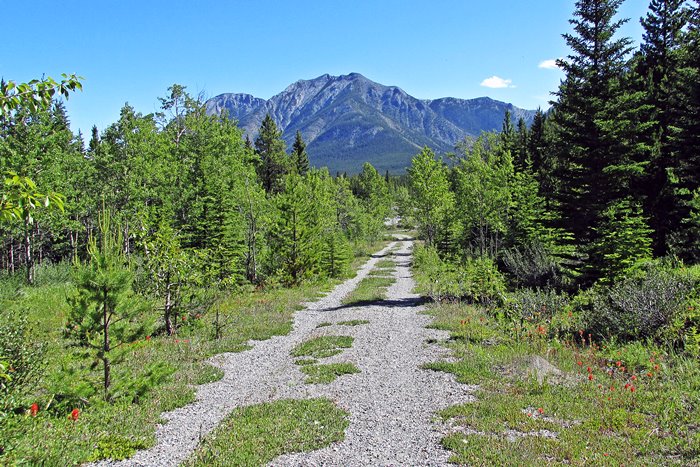 If a short, casual, historically-significant walk is the day's objective, this easily-accessible old stretch of road in Kananaskis Country just might provide the solution.

This short snippet of old gravel road is a remnant of the original Forestry Trunk road into coal mining and forestry locations before the dedication of Kananaskis Trail (Hwy 40) in 1978.

Convenient parking is at clearly-signed Wasootch along Kananaskis Trail (Hwy 40) south from the TransCanada Highway west of Calgary, Alberta, Canada.

The parking area is primarily for hikers to Wasootch Ridge, scramblers to nearby peaks or rock climbers on Wasootch Slabs but none of these are this day's objective.

Arrival at Mount Lorette Ponds signals having driven a bit too far south but the incredibly beautiful ponds are another noble objective which can be achieved on the same day.

After parking at Wasootch, the hike begins by proceeding directly south across the stony bed of Wasootch Creek to the visible dirt road on the far side.  The road cannot be driven and is not worth the time to use a bicycle.

The short hike along the gravel road begins through forest surrounded by majestic mountain summits.  On the left, an old gravel pit is gradually being consumed by wildflowers and new trees. 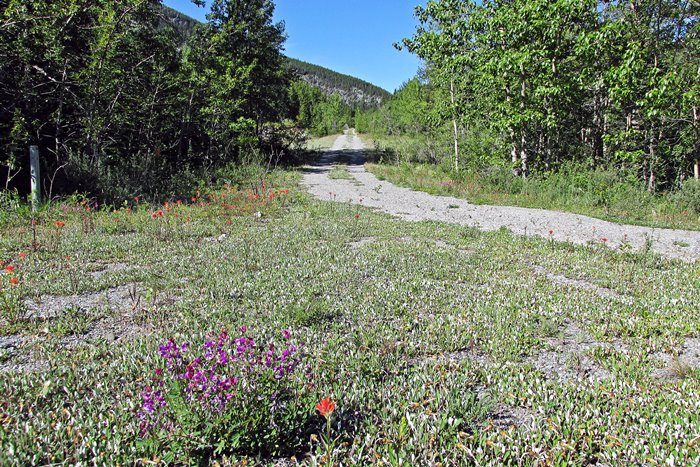 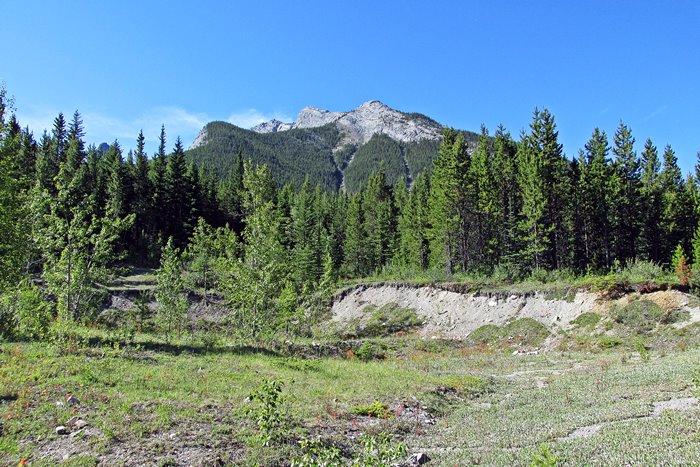 A short distance further along the road encounters a beaver trap in the path of a small stream embellished with old stumps, wetland and the remnants of an old and very large pond.

The old road swings right past two incredibly beautiful ponds before another forest section sweeps left into gentle descent towards a fenced and monitored communications facility featuring an outstanding view of Mount Bogart in the distance. 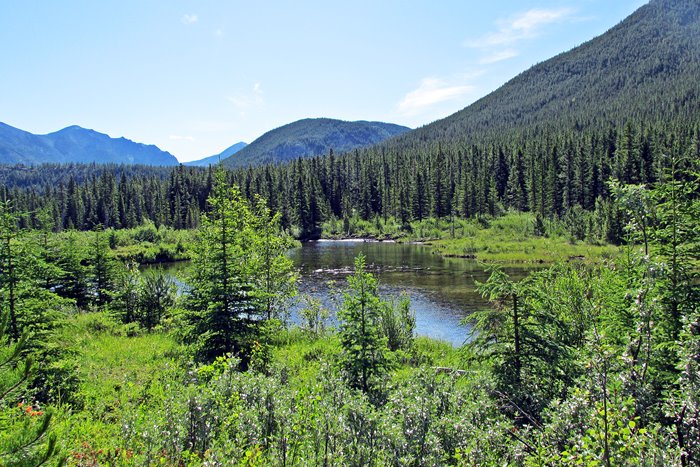 Immediately past the communications facility an old bridge with a deteriorating surface provides an iconic view of Mount Lorette as well as graphic evidence of flood damage from the June 2013 flood both up and down stream.

The road continues south past the bridge without further evidence of vehicular traffic. 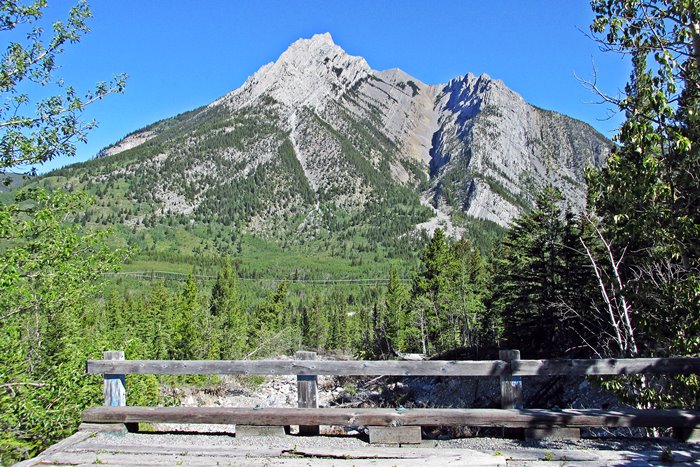 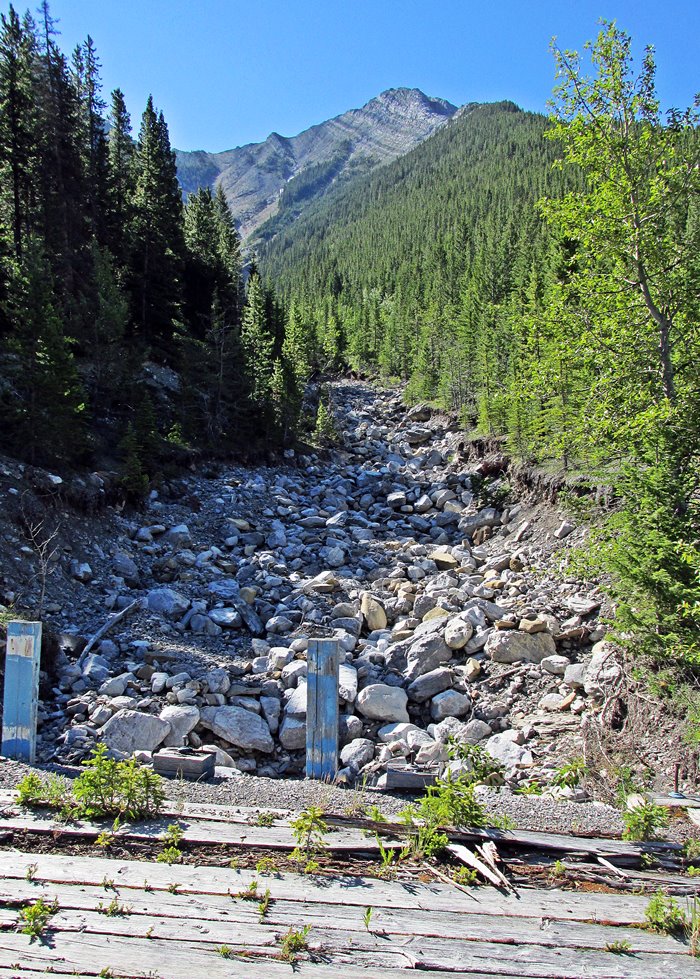 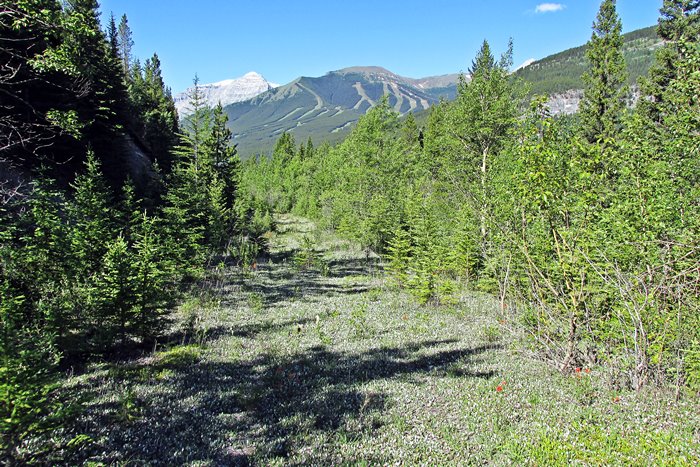 The broad route deteriorates rapidly to narrow path through forest then compromised game trail through dense forest to an opening close to and above Kananaskis Trail (Hwy 40), the modern alternative to this old and historic Kananaskis Road. 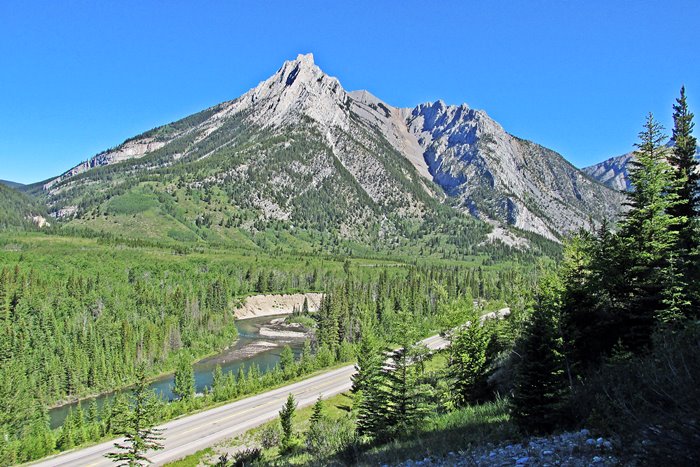 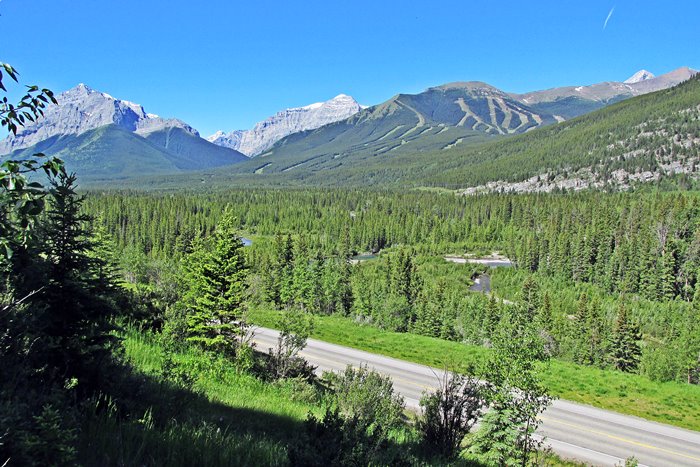 Retracing steps returns via the route taken in for a review of the natural and constructed features along this old stretch of road. 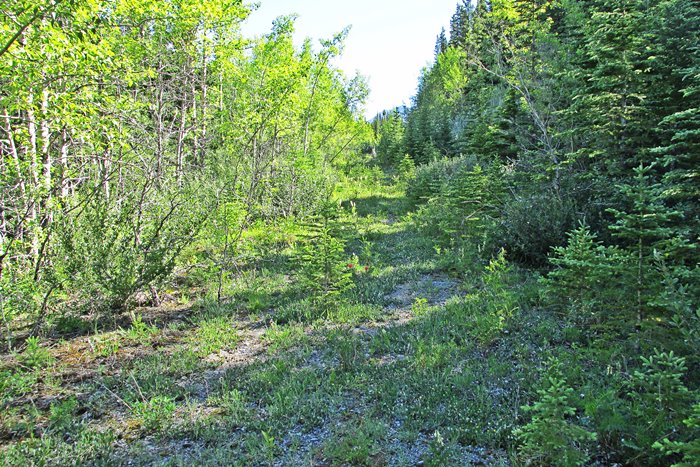 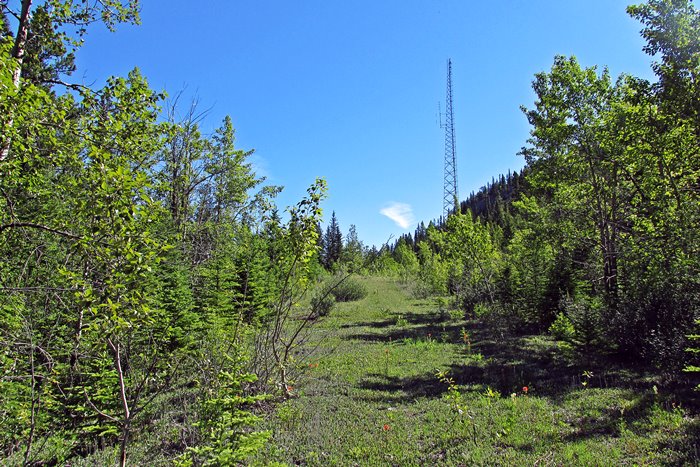 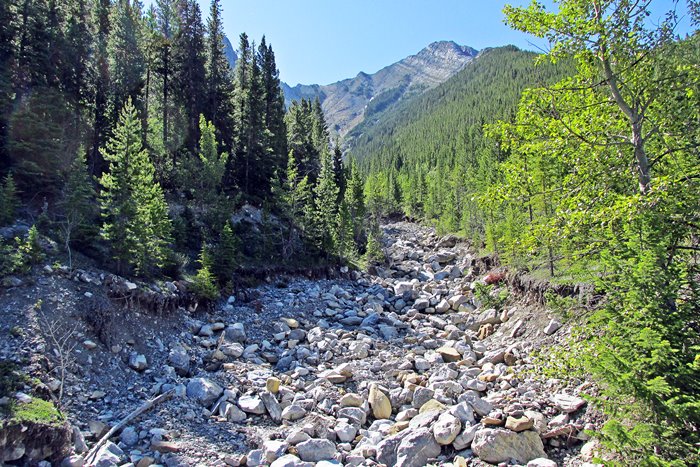 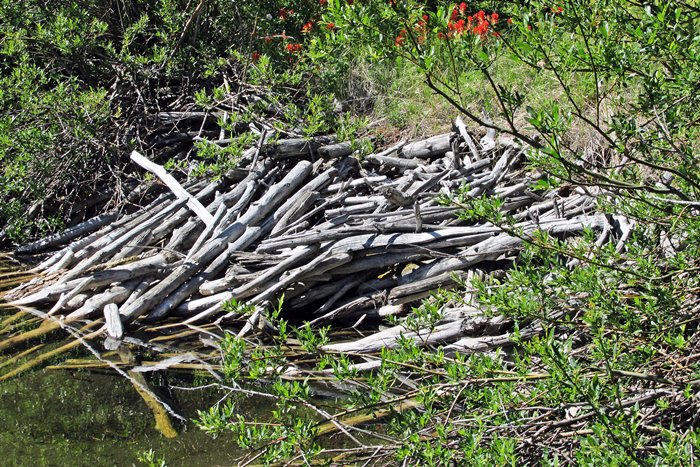 Extra time is taken to explore and photograph the old and incredibly beautiful, crystal-clear-water beaver ponds prior to continuing the short trek along the road towards Wasootch Ridge on the far side of the rocky plain of Wasootch Creek.

The majority of the creeks water flow is nearly always underground. 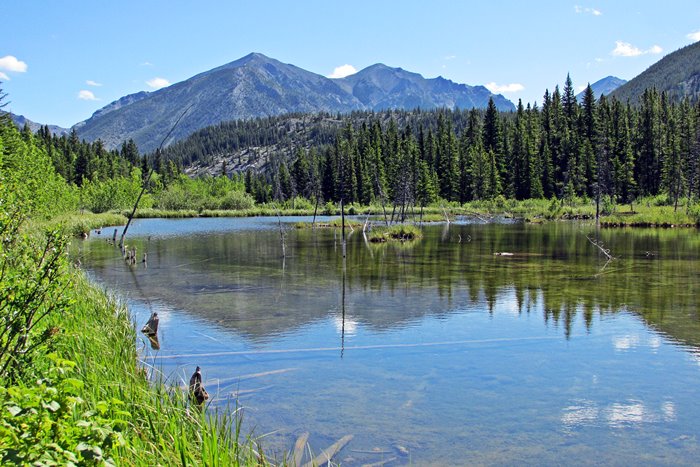 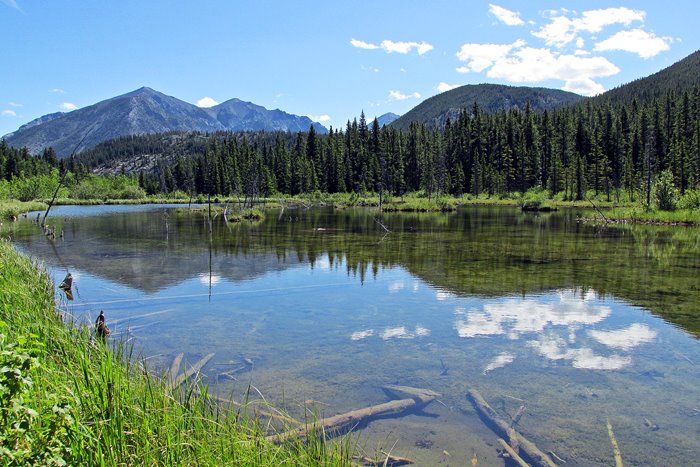 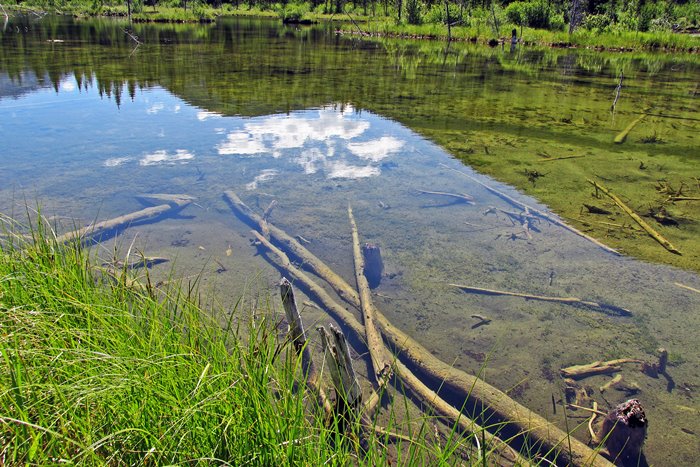 Exit from the road to the June 2013 flood plain of Wasootch Creek provides an incredible view across Kananaskis Trail and Kananaskis River to the picturesque facade of the infamous Mary Barklay's Mountain. 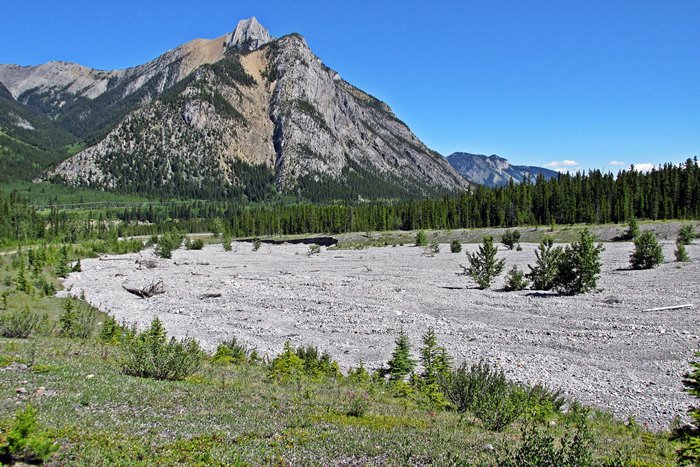 There is time remaining in this day to experience the reconstruction of the repaired trail link between the Ribbon Creek parking area and Kovach Link.  The June 2013 flood damage in that area was horrific and the repair solution may be fascinating to experience.

Photographs for this hike with Jen were captured on Monday, June 20, 2016.

Following is a truncated version of material obtained from the history section of the Kananaskis Trail website which contains a plethora of useful information about the phenomenal recreational resources available in Kananaskis Country.

Modern history for Kananaskis Country begins near 1858, when Captain John Palliser named Kananaskis after a native who, by legend, survived a vicious blow to the head from an enemy.

"Kananaskis" is an interpretation of “the meeting of the water.”  Visits to the region during exploration of the Canadian Rockies included David Thompson in 1787 and 1800, Peter Fidler in 1792, and James Sinclair leading Scottish settlers to the Oregon Territory in 1841 when the area remained essentially uninhabited wilderness.

Logging began near 1883 in the foothill valleys of the Elbow and Sheep Rivers. Coal was mined at various sites including Ribbon Creek.  To serve these industries and burgeoning development of settlements around Fort Calgary, roads must be constructed and expansion includes the Forestry Trunk Road (Highway 40).

As early as 1902, parts of Kananaskis Country were included in the Rocky Mountain National Park (now Banff National Park).  This land was removed in 1911 and eventually turned over to the Government of Alberta in 1930.

During Alberta’s oil-and-gas boom of the 1970s, oil revenues collected by the provincial government were placed into the Heritage Savings Trust Fund to fund various projects including Kananaskis Country, officially designated by Premier Peter Lougheed in 1977 as Kananaskis Country Provincial Recreational Area.

The mandate served a multitude of uses, including primarily recreational pursuits.  Kananaskis Country also holds active oil and gas leases, grazing permits, and a hydroelectric station on the Kananaskis River.  Often contentious timber extraction leases have been in place in the region since the 1940s.

Banff-Cochrane MLA Clarence Copithorne, a rancher in the Jumpingpound area, recognized the growing pressure on the eastern slopes from Calgarians wishing to escape the city in the late 1960s and early 1970s.

As Minister of Highways, Copithorne planned to upgrade the road into the Kananaskis Valley to divert people away from ranch lands.

Calgary architect and environmentalist Bill Milne challenged the government to consult the public about the highway upgrade. Through Mr. Milne, the Government of Alberta received over 48,000 responses to a survey where the majority supported creation of a large protected area.

In 1972, the Alberta Wilderness Association proposed a wilderness area west of Calgary in the Elbow, Sheep and Kananaskis Valleys coincident with the Environment Conservation Authority identifying a need to set aside this area to protect watershed and to provide resource development, tourism and recreation opportunities.

Since 1977, the provincial government has continued to invest into Kananaskis Country along with private investors.  Kananaskis Village was developed in the early 1980s in anticipation of the 1988 Winter Olympic Games.

A couple of years later saw the declaration of Spray Valley Provincial Park, which created a continuous stretch of protection for the Canadian Rockies from Willmore Wilderness Park in the north to Peter Lougheed Provincial Park in the south.

The needs of industry, ranching and tourism continue to seek balance with the mandate to preserve the animals, plants, and processes that keep the Kananaskis Country ecosystem healthy.