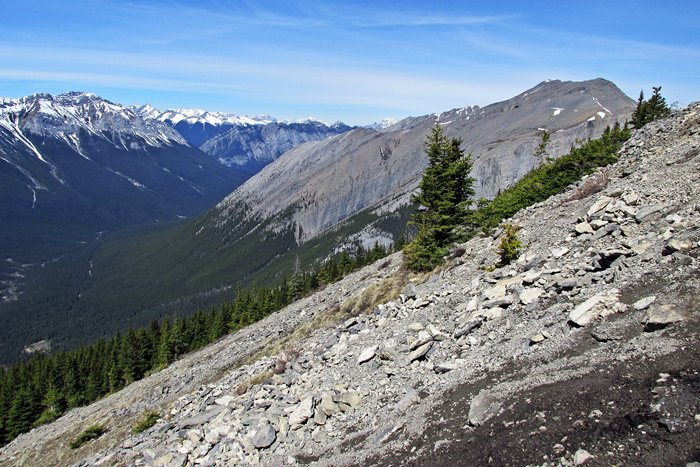 The early morning start on a perfect, bluebird, weekend day is required to secure a space in the Goat Creek parking area immediately south of Whiteman's Gap to get ahead of the throngs of hikers likely to have the same hiking objective.

Parking is filling rapidly with eager hikers preparing to tackle the bookend hikes above Whiteman's Gap with Ha Ling Peak on the east side and the East End of Rundle (EEOR) on the west creating towering monolith monuments above Canmore an hour west on the TransCanada Highway from Calgary, Alberta, Canada.

This popular hike begins by crossing the Smith-Dorrien Trail to a gravel road ascending the short distance to a bridge crossing over the canal.

Immediately beyond, a cluster of large boulders sporting a memorial brass plaque guards the trail-head for Ha Ling Peak and it's adjacent companion Miner's Peak.

The hiking distance to the saddle beneath Ha Ling Peak and Miner's Peak is short and under 3 KM (1⅞ miles) however the gut-sucking elevation gain near 700 m (2,297 ft ) over relatively complex and diverse terrain will create a lasting memory.

The vistas from summits and saddle are more than worth the time and effort, ergo the fact the hike is very popular and often well-attended, particularly on fair-weather, weekend days.

The initial section of trail climbs through dense, aromatic forest on initially-wide, braided trail saturated with roots.  The ramp up is consistent and soon joins the edge of a drainage off to the right.

Rustic wooden log stairs provide a change in direction to the left onto marginally decent trail past a rock band and onward to a never ending series of long switchbacks which consistently ramp up the south backside of the mountain.

Along the trail, openings in dense forest confirm the rapid gain in elevation with spellbinding vistas over lakes and rivers in the valley separating the Goat and Mount Rundle.

The other end of the valley exits at the Banff Springs Hotel and a trail through the valley hosting Goat Creek contains an outstanding 19.2 KM (12 mile) one-way hike or bicycle ride on excellent quality trail which is in no way similar of the assault currently underway to achieve the summit at Miner's Peak.

Rock band traverses which could be challenging are eased by trail supplements. Vistas into the western valley are stunning.

A gentle breeze moderates the sun's warmth and the hiking effort. 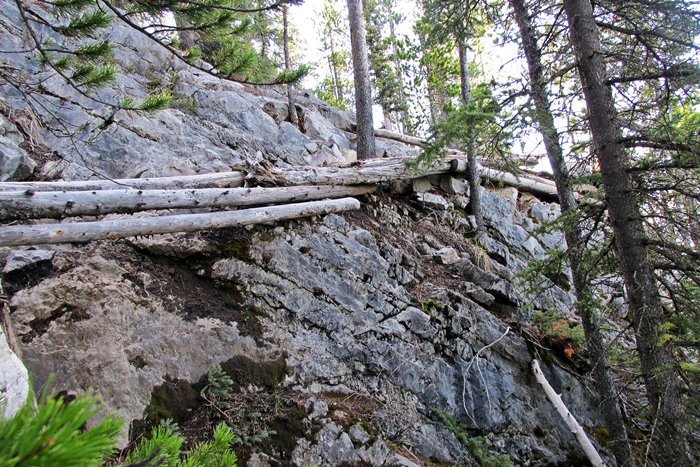 Moderate switchbacks draw to a close at a brief, steeper rise over root-laden trail to a long, long, slightly steeper ramp to the right which completes the transition to alpine terrain at a rustic viewpoint over an impressive bowl beneath the saddle between Ha Ling Peak and Miner's Peak at the west terminus of majestic and aptly-named Mount Lawrence Grassi.  There are three options from the end of this long switchback.

The first option is minor additional ascent to the summit of Ha Ling Peak on the left. This choice can be a hike by carefully choosing route or an easy scramble by ignoring route to handle whatever shows up on an undisciplined straight line bid for the top.

The second choice is commonly chosen to expend less energy and enjoy lunch on the saddle with magnificent vistas over Canmore and the Bow Valley Corridor towards Grotto Mountain and Mount Lady Macdonald bracketed by sweeping views to the East and West.

The third option is a right turn across the saddle to enjoy the view from Miner's Peak and/or Three Humps.

All three options can be achieved on the same longer day but today's chosen objective is Miner's Peak.

The short hike across the saddle is dramatic with plenty of safe space along the top hosting dramatic drops on either side and spellbinding mountain vistas.  The route is short and safe.

Lingering snow cornices add to the dramatic view.  Elevation gain from the saddle is about 70 meters (230 ft).  Three Humps reside to the right and Miner's Peak is an obvious bend to the left.

Time is taken to sit, relax and soak up the fresh air, sun and phenomenal views over Canmore and surrounding mountains before considering retreat. 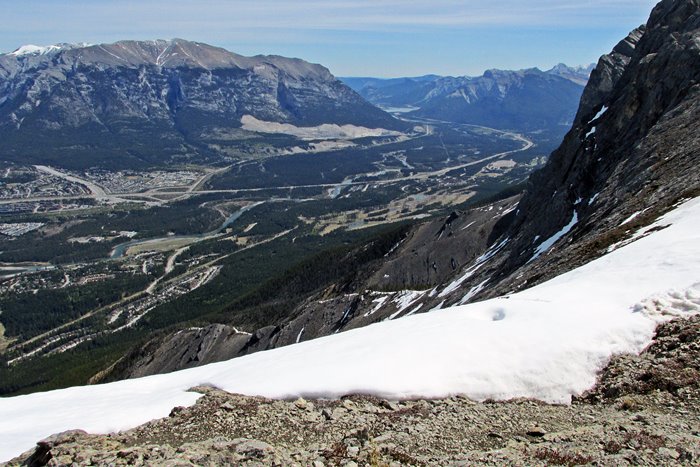 Arrival at Miner's Peak summons up a short, easy scramble to achieve the lofty views from the top.  Three Humps is an easy scree scramble with different and unique view perspectives towards the west and north.

Faint, narrow trail wiggle down and past Three Humps to intercept the transition to the moderate scramble on Mount Lawrence Grassi for well-equipped and experienced scramblers to achieve the 2,685 m (8,809 ft) true summit.

The east side of Miner's Peak hosts a daunting chasm best avoided.  Views from Miner's Peak over Canmore and along and across the Bow Valley Corridor consume a truly impressive and humbling expanse of mountain scenery.

Those who have assembled a collection of memories from surrounding peaks enjoy the added benefit from a flood of powerful past memories and experiences.

Ha Ling Peak is hosting a large number of visitors who are scrambling the surface like ants while Miner's Peak is busy but less crowded.

Ha Ling Peak and EEOR from Miner's Peak summit with Rundle Canal below.

The return is via the same route taken for access.  High altitude adventure is punctuated by dramatic views from both sides of the saddle prior to the sustained and over-crowded descent on multiple switchbacks over frequently complex terrain and the canal bridge.

The parking area has been consumed by vehicles with overflow stretched along both sides of the Smith-Dorrien Trail for a half kilometer in both directions not to mention the remainder of parking to the north consumed by hikers and scramblers enjoying the vistas from the East End of Rundle (EEOR).   Busy day.

This perfect weather day hike in early season is culminated with beverage in Canmore prior to the return drive to Calgary, Alberta, Canada.  In hindsight, there is good logic in planning this mission for grand weather on a weekday to avoid the crowds.

Photographs for this hike to Miner's Peak are captured on Sunday May 1, 2016.