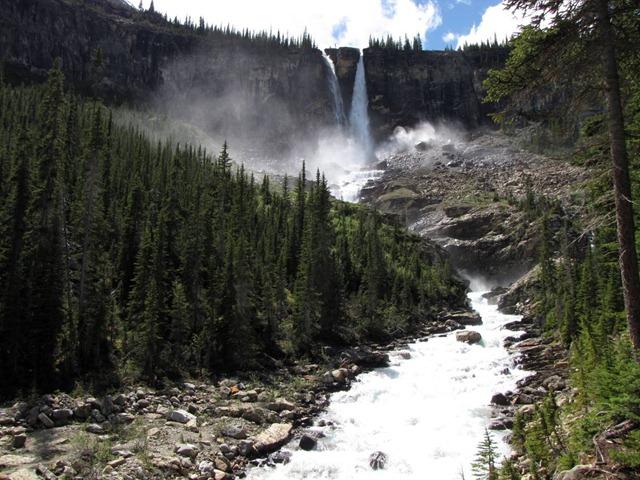 The Parks Canada Visitor Centre in the tiny, historic coal mining and railroad community of Field, B.C., provides a wealth of information for exploration of the natural wonders contained within the borders of Yoho National Park.

Although Yoho is one of Canada's smaller National Parks by land mass, Yoho National Park offers a wealth of natural treasures which appeal to a broad range of adventurers ranging from sightseers and novice hikers, to seasoned, well-equipped and highly experienced mountaineers on aggressive multiple day missions.

During construction of Canada's Transcontinental Railway, one of the most challenging sections was the 'Big Hill' near the Alberta-British Columbia border.

Prior to construction of the Spiral Tunnels, the steep grade challenged locomotives of that time and created a challenging, and not always successful, component along the rail line.

The 'Walk in the Past' hike is a short, relatively easy, interesting and informational interpretive journey through lush forest along the path used by railway construction workers who built the rail line.

The hike leads to an old, wrecked locomotive which failed to make the grade.  It is an interesting and enlightening story.

Wreck of the Baldwin #7717 Steam Locomotive in Yoho National Park

The short, easy hike to Wapta Falls begins near the west border of Yoho National Park in British Columbia, Canada.  When the gate is open, a small parking area precedes a short, flat walk through forest to Yoho National Park's largest waterfall by volume.

When the gate is closed, the hike along the gravel road is substantially longer but still worthwhile.  At the end viewpoint, trail switchbacks lead down through lush forest to the base of the waterfall for the ability to gain different and outstanding views from the riverbank. 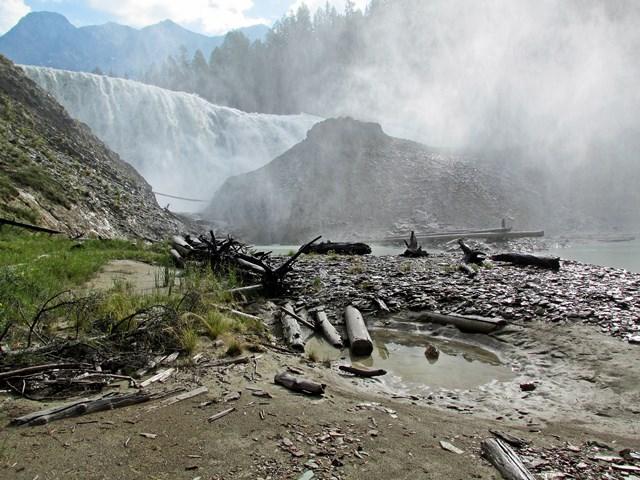 Hiking along Hoodoo Creek near the west side of Yoho National Park is an uphill, energetic endeavor through forest on switchbacks with occasional dramatic mountain vistas.

The final approach above a valley hosting the cascading, white water of Hoodoo Creek, with far-side hoodoo hints, will lead to an excellent cluster of hoodoos.

Two rustic trail branches lead to either the bottom or top of the hoodoos.  Both trail branches are recommended to obtain a full suite of dramatic photographs of the impressive cluster of hoodoos. 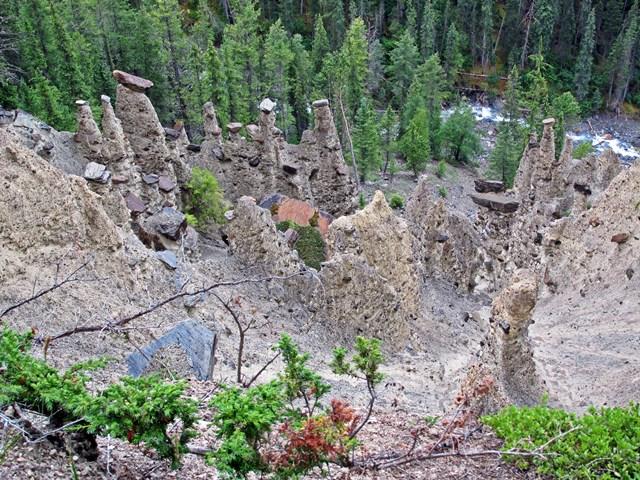 Hoodoos along Hoodoo Creek from the top in Yoho National Park

Yoho Lake is an outstanding and relatively short hike from the main parking area at Takakkaw Falls to a pristine, emerald lake which hosts a backcountry campground.

This location is also a staging area for a wide variety of world-class hikes in Yoho National Park, British Columbia, Canada. 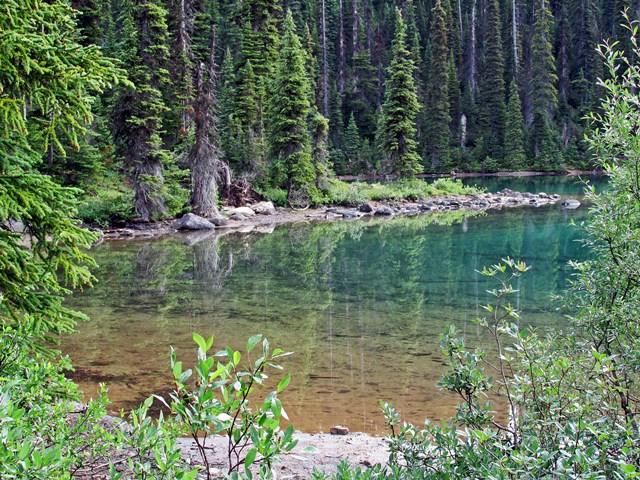 The moderate hike to the Mount Stephen Fossil Beds is restricted to guided tours.  This fascinating location provides a glimpse into early life on Earth when these mountainous locations were at the bottom of an ocean.

Guides for the hike, which begins in the small Community of Field, share a wealth of fascinating information about the formation of Earth.

The Mount Stephen Fossil Beds offer an energetic uphill jaunt.  Sweeping mountain views are breathtaking from this lofty location on the side of Mount Stephen in British Columbia, Canada. 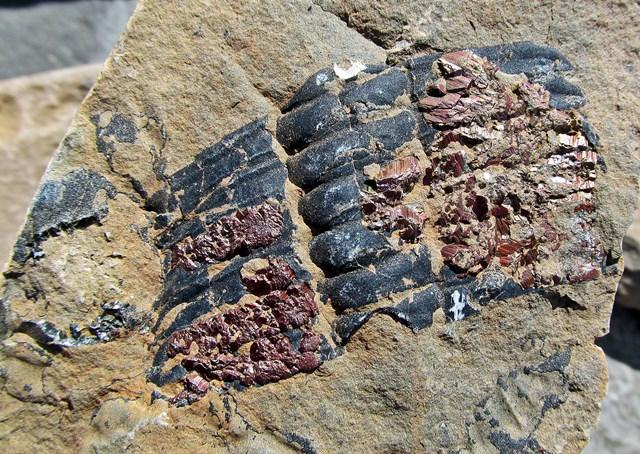 The short hike up and into Emerald Basin begins with an initial steeper component from the shoreline of the trail around world-famous Emerald Lake in Yoho National Park, British Columbia, Canada.

Mountains are up close and personal.  Views are breathtaking in this full sensory experience. 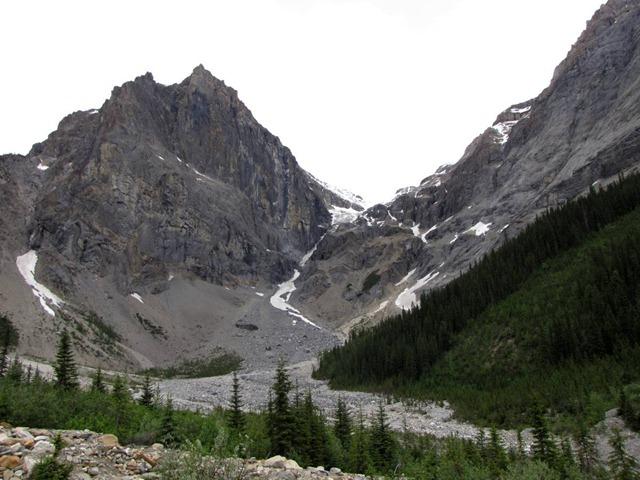 The short hike on fully-developed trail to the base of towering Takakkaw Falls begins from the main parking area following the twisting, turning drive from the TransCanada Highway in Yoho National Park, B.C., Canada.

Powerful cascading water is fed by melt from Daly Glacier, branching off from the Waputik Icefield above, and rainbows often dance in the mist created by water pounding against sheer rock walls. 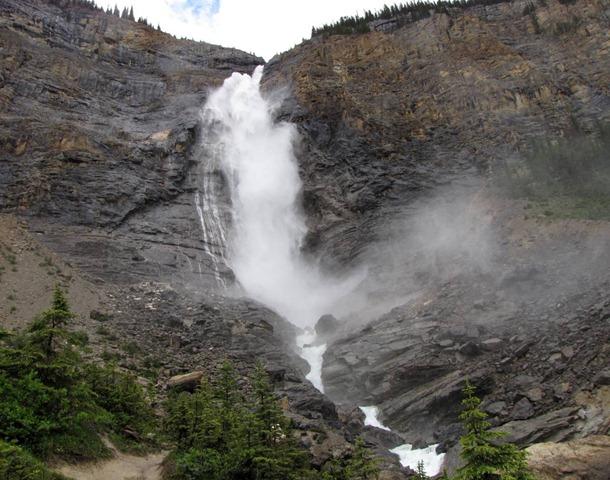 Twin Falls is a moderate hike beginning from the main parking area at Takakkaw Falls with multiple natural wonders along the route.

Extensions and variable routes on this hike provide a plethora of unique and fantastic hiking opportunities.

Walcott Quarry is a restricted World Heritage Site suspended on the side of Fossil Ridge near the summit of Wapta Mountain.  Access to the quarry is by guided tour only.

Views are breathtaking from the Wapta Traverse, across the valley hosting world-renowned Emerald Lake, to majestic glaciated mountains and waterfalls.  The final steep climb to Walcott Quarry is followed by a fascinating opportunity to learn about early life on Earth before retreat, via the route taken past Yoho Lake, to the trail-head at main parking near Takakkaw Falls.  The tour is a long and physical day. 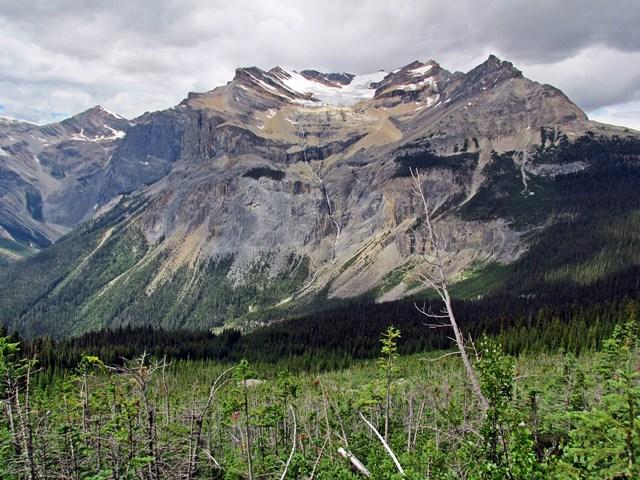 View of mountains, glaciers and waterfalls from the Wapta Traverse

Hamilton Falls is a picturesque waterfall in the rocky folds of a cliff face along a clearly marked trail at the parking area for Emerald Lake in Yoho National Park, British Columbia, Canada.

There is remaining evidence of an old power generation facility and water source at the base of the waterfall. This short, easy and scenic hike is a prelude to the more challenging and full day hike further to Hamilton Lake.

A bonus is easy accessible ice cream or food and beverage at Emerald Lake Lodge on the shore of spectacular and world-famous Emerald Lake. 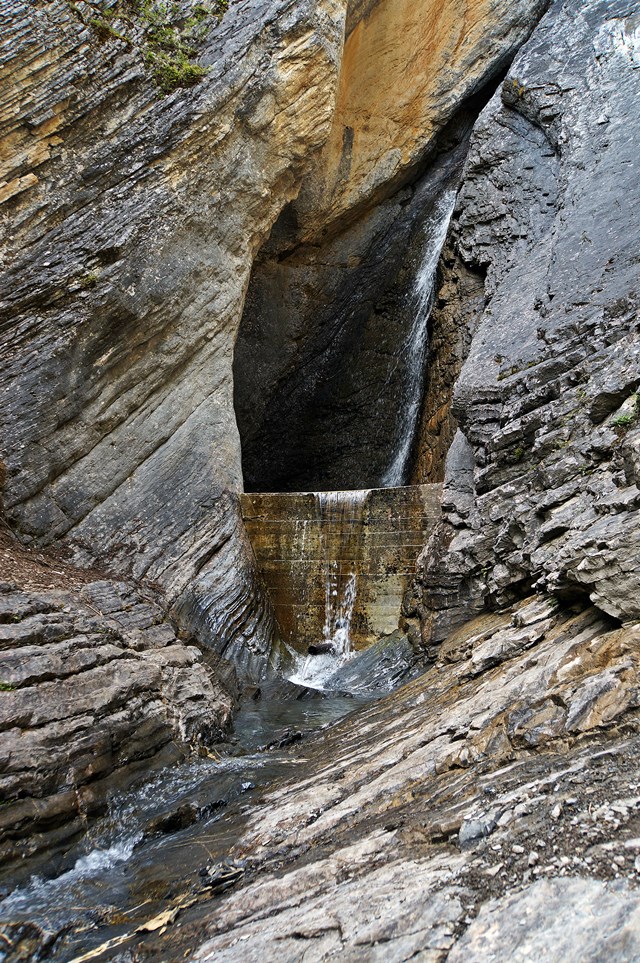 Your best ally is a quality hiking guidebook and trail map to assess distance and elevation.  It is always wise to check in with Parks Canada for current trail status and restrictions.