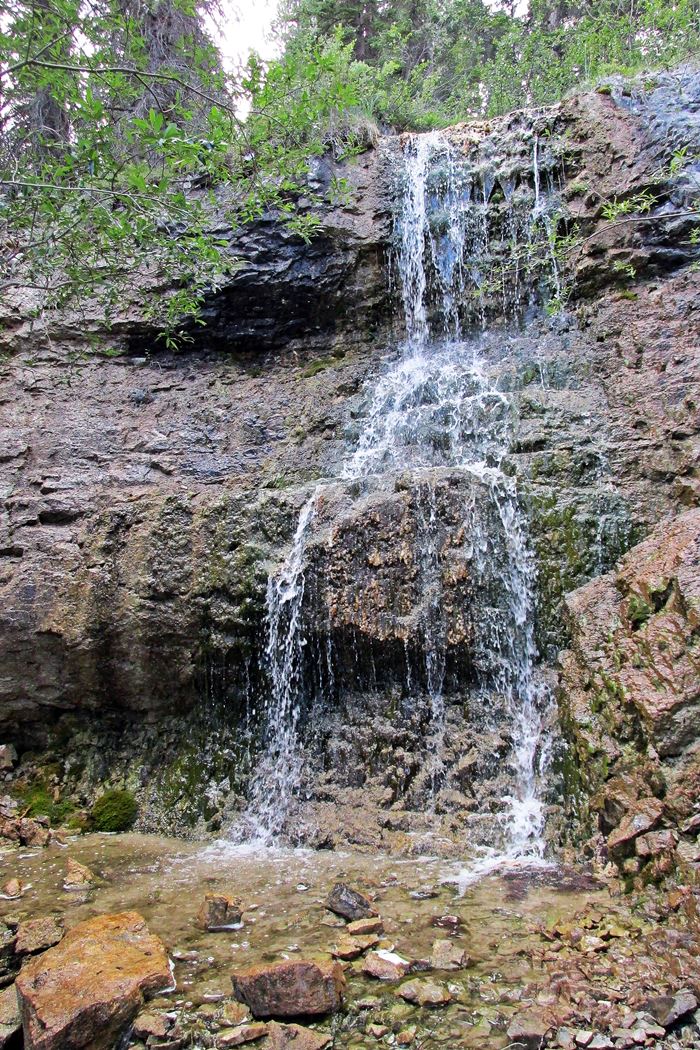 Following a hearty breakfast and making the morning's arrangements for a short, next-day, horseback ride and exploration near Whitegoat Lakes, the walk from the motel room at David Thompson Resort, passes the children's playground, uphill through the campground to the biffy-adjacent trail-head near campsites 7 and 8.

The dramatic walk through tall pines heads downhill past a foot path trail junction on the left to a road which leads to Lake Abraham.  The important foot path heading north provides good, but relatively boring passage through forest with occasional views over Lake Abraham.

The round trip hike to Little Indian Falls from David Thompson Resort is about 9.1 KM (5¾ miles) with minimal elevation differential to a maximum elevation of 1,385 m (4,544 ft).

The option to continue towards the lake provides a far more interesting walk along the shoreline, but there may be consequences. 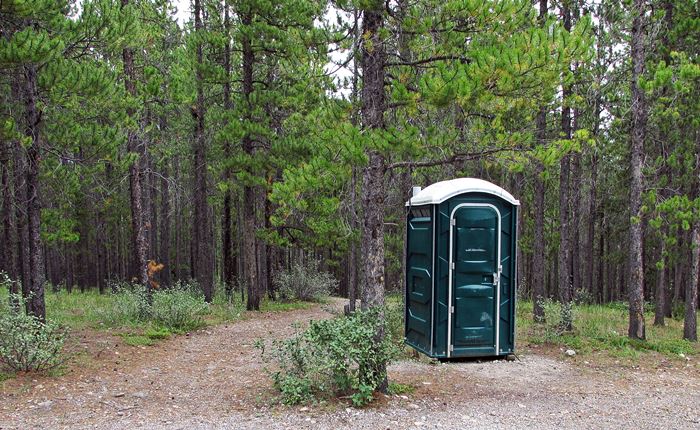 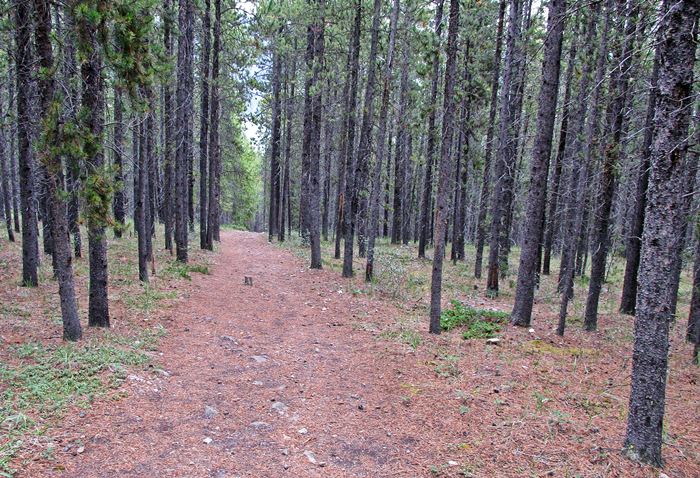 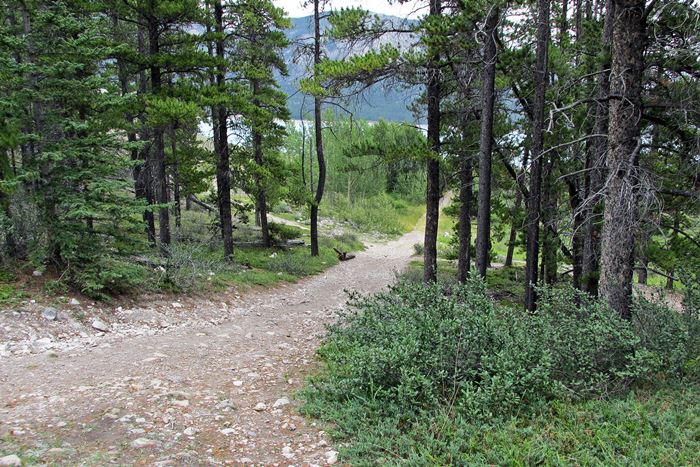 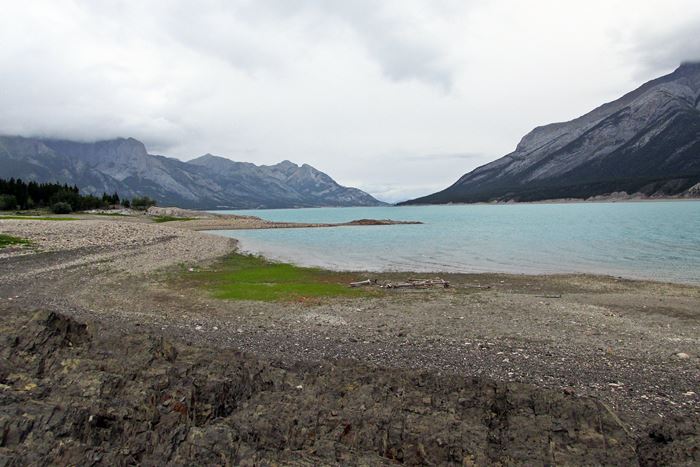 After enjoying the mountain-surrounded shoreline of Abraham Lake, a retreat to a northerly-tending road initially and incorrectly appears to be an alternate route.

The road quickly dwindles into obscurity and the hike continues back on the fascinating shoreline heading north with phenomenal views amid the sound of gentle breeze curling water onto the lake's shoreline.  The occasional easy obstacle adds a bit of adventure to the exercise.

There is no problem finding a trail.  There are lots of them and none are signed but the slug through dead fall and dense shrubbery arrives at a more prominent and occasionally flagged trial heading north above the shoreline.

Later the discovery is made the flagged trail is the correct trail but it was abandoned, probably within a short distance of the target waterfall. 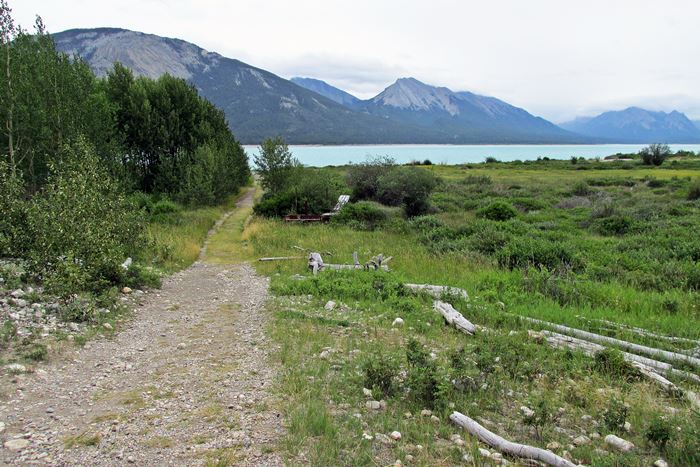 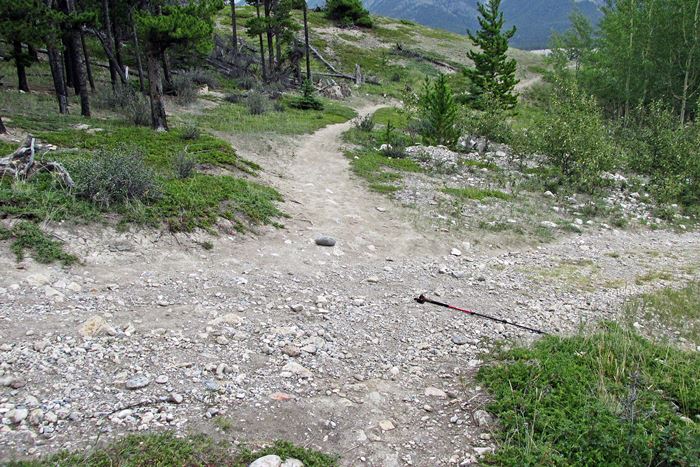 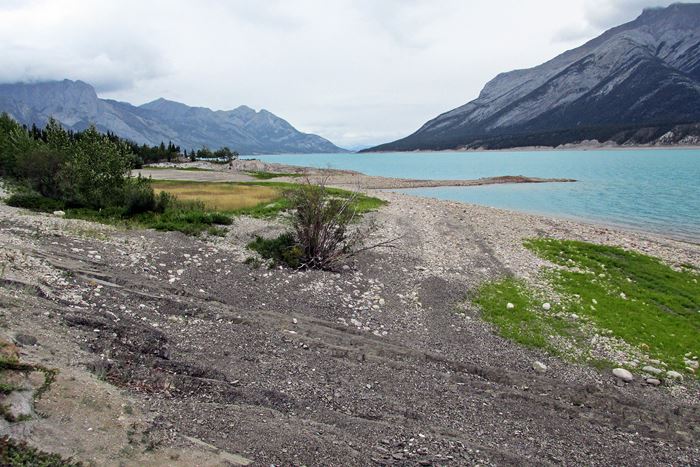 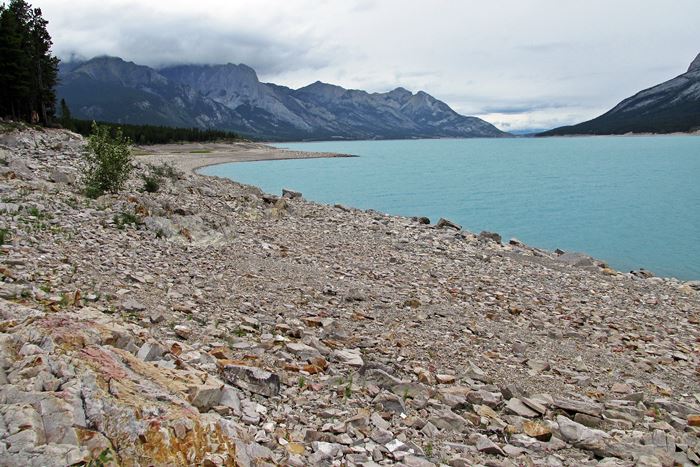 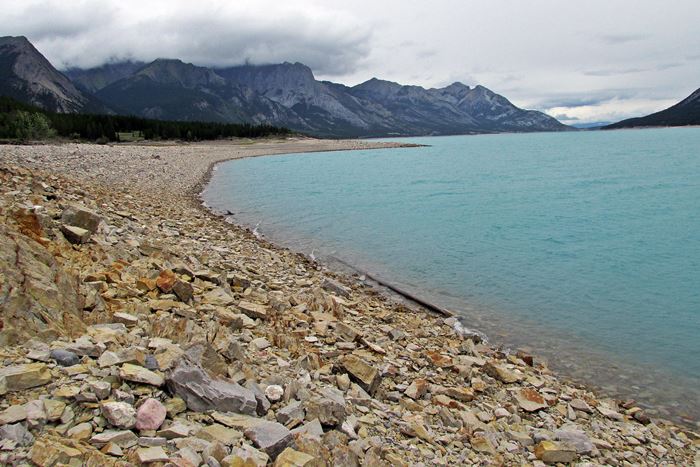 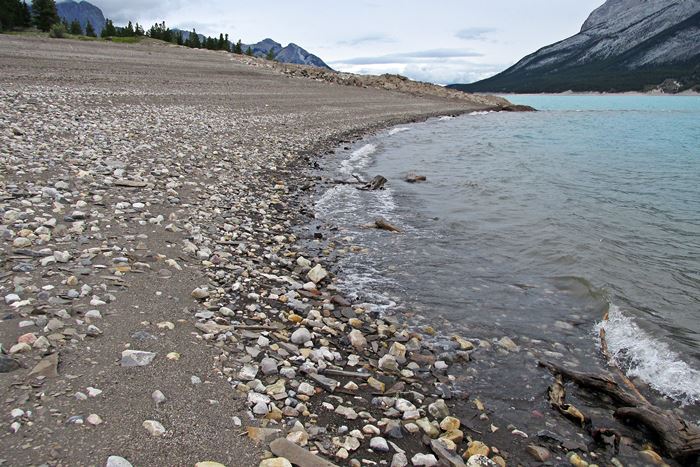 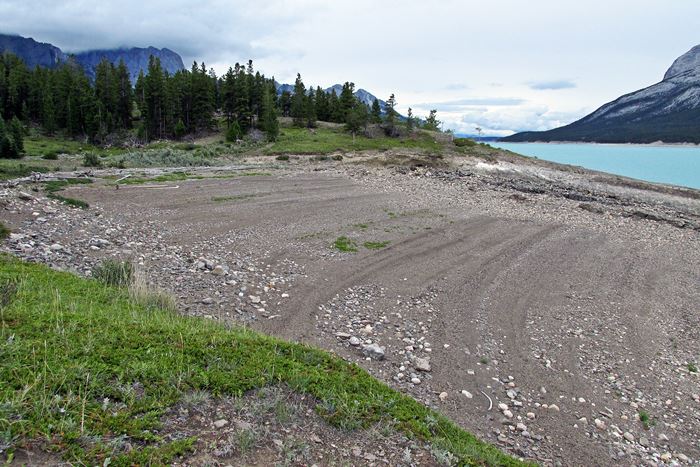 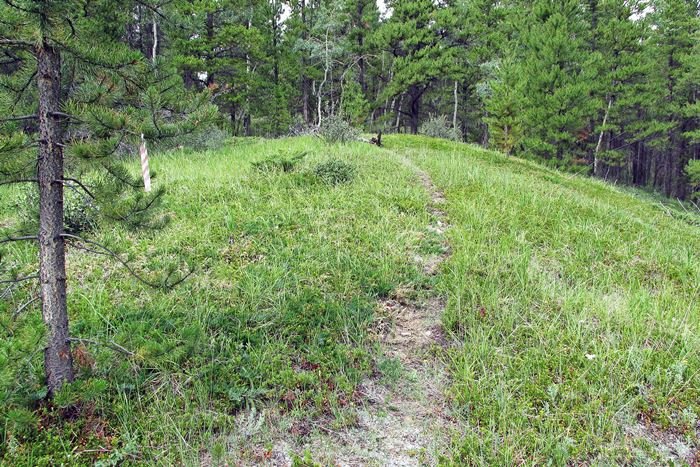 Returning along this flagged trail pops out on the previously-passed road beneath David Thompson Resort.  So far, close to 9 KM have been hiked without finding Little Indian Falls.

There is an alternate approach to Little Indian Falls which had been revealed to me by one of the staff at the David Thompson Resort Restaurant during supper the prior evening.  The staff at the lodge are an invaluable source of information above and beyond relevant guides and maps.

The second attempt begins with a short drive north from David Thompson Resort to the entrance to Aurum Lodge where parking is at the entrance sign.  From here, a short, well-defined trail heads south to a left turn.

The initial trail makes a sharp left turn at a comforting sign which struggles to reveal 'Hiking Trail'.  It doesn't state the destination but there is a level of confidence this trail may lead to Little Indian Falls.

The approach is fairly short and intuitive.  There are several unsigned intersection alternatives but logical perseverance leads straight through and beyond an important unsigned four-way junction.

Within a short distance the sound of the waterfall leads the way.  The view of the waterfall, on the right, is looking directly down over the top of Little Indian Falls.

To the left, access to the waterfall is a short down scramble followed by a short, uncontrolled slide over rock followed by a small, airborne, leap of faith to pathway below which leads right directly to the bottom of Little Indian Falls.  Probably not something I should do solo with compromised eyesight and seriously flawed depth perception but no guts, no glory.

The down scramble and slide go well.  The free fall is a bit further than expected but my landing is good and surrounding trees and shrubbery save the pitch forward.  The camera survives as well.

Overall, the maneuver goes fairly well except for the part when a hole is torn in the seat of my pants during the uncontrolled slide component. Darn! 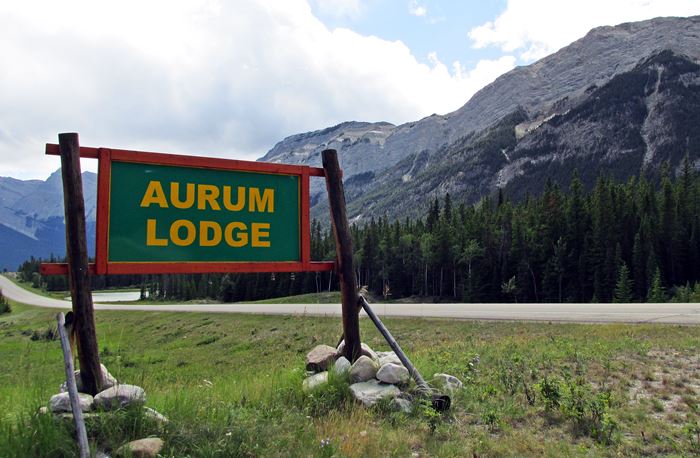 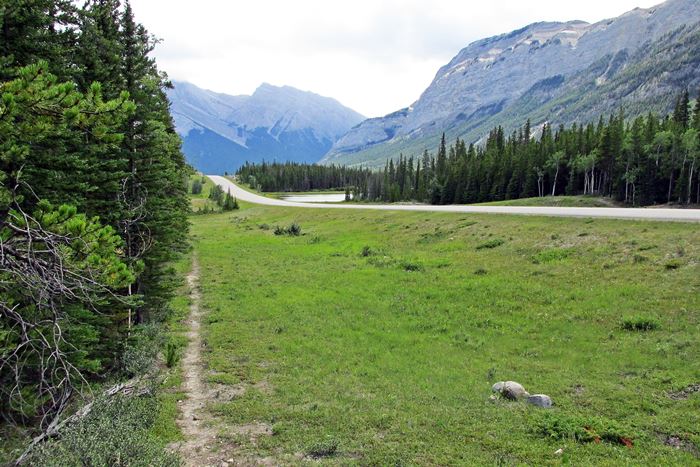 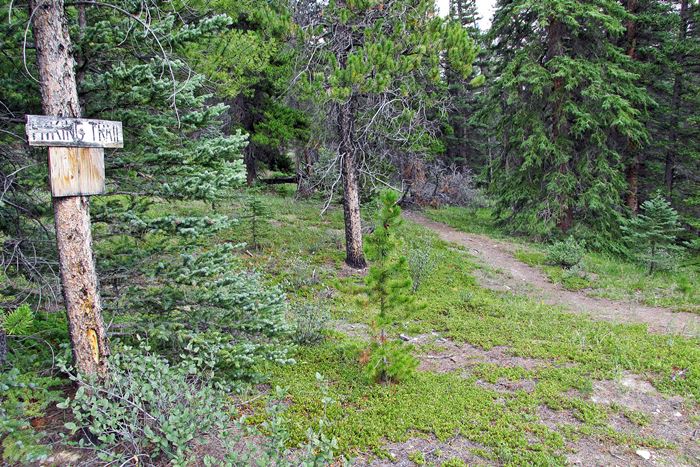 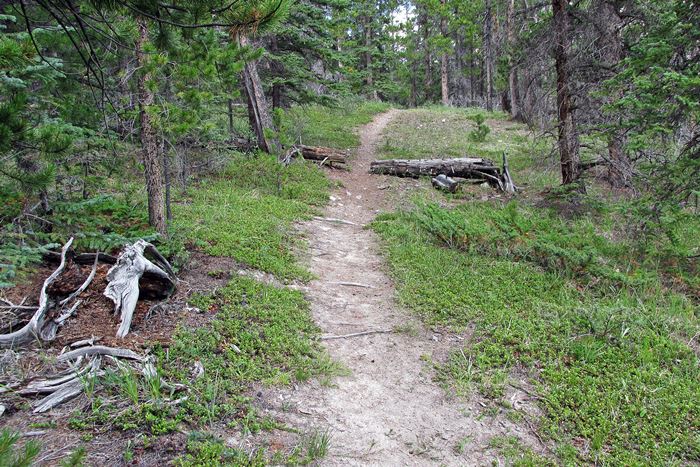 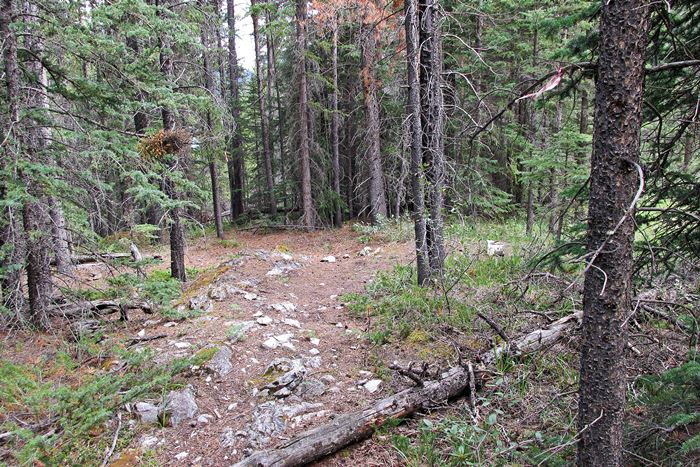 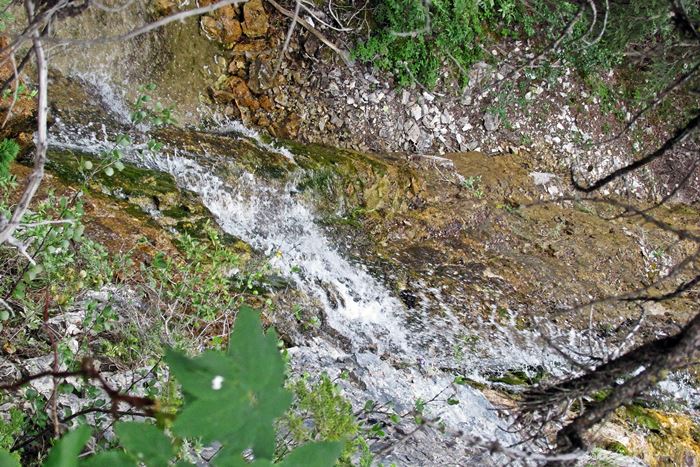 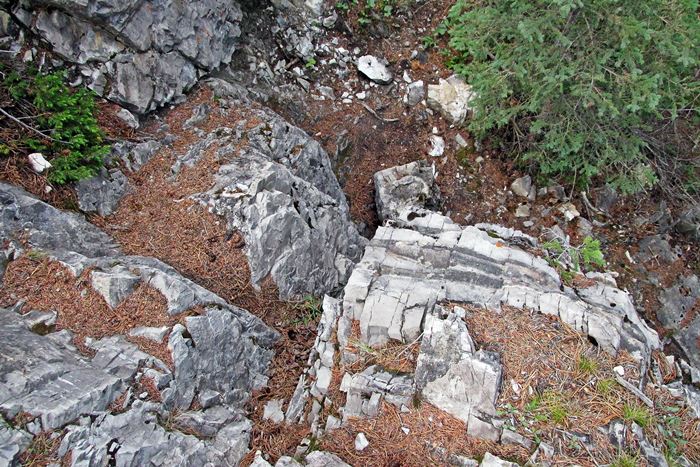 The landing in tight quarters is good and a short curl right delivers me to the base of the small, but very pretty Little Indian Falls where, centuries ago young Cree children of the Smallboy's Band enjoyed comfortably warm shower baths.

The quarters are tight and it is necessary to push into surrounding brush to obtain a full image. 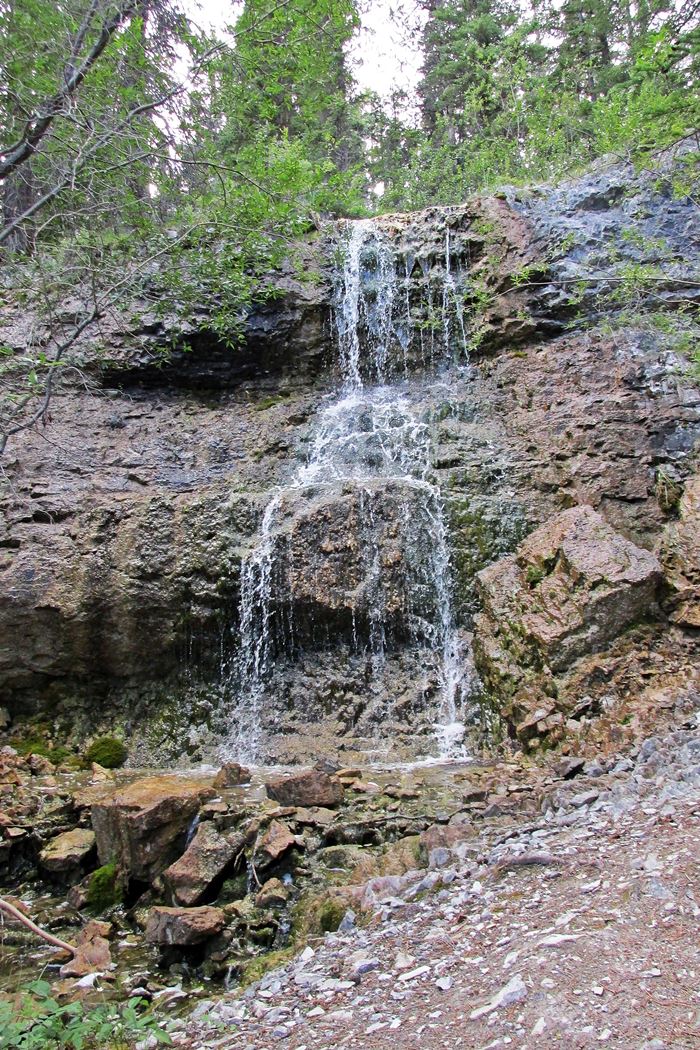 Retreat offers a variety of trail options.  The choice is a path slightly north which leads onto a short climb to a ridge top and a left branch back to the original trail used for access.

The return to the car is short, easy and straightforward.  At exit from the forest there are breathtaking views south across a wildflower-adorned meadow to dominant Sentinel Mountain soaring high above Abraham Lake. 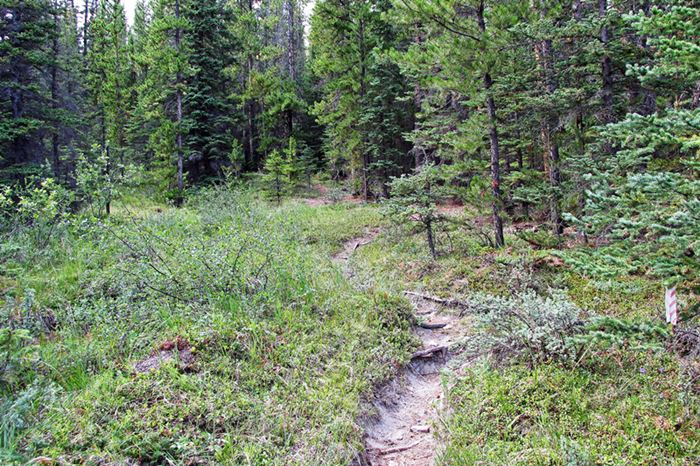 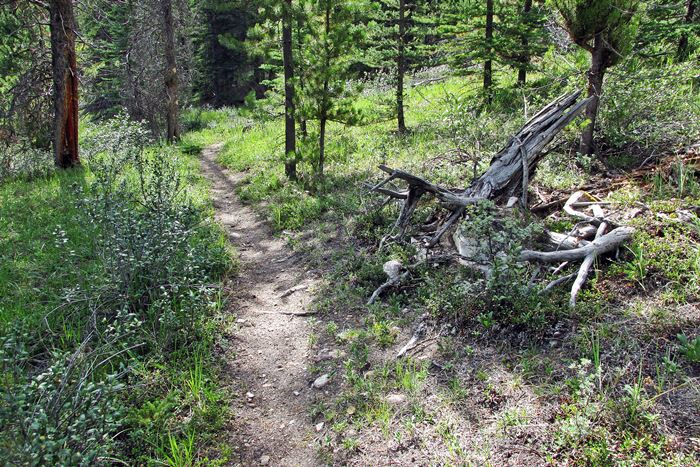 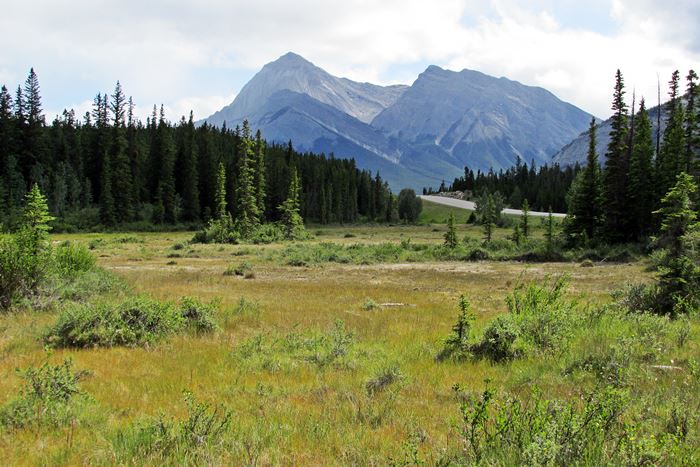 On the other side of the David Thompson Highway green, shallow ponds border the west side of the highway beneath Mount Stelfox.  These beautiful and crystal-clear ponds are part of the outlet from Whitegoat Lakes which feed Little Indian Falls.

Whitegoat is vernacular for the mountain goat.  The shaggy white antelope was previously common near Kootenay Plains but habitat disruption and over-hunting have pushed them into surrounding mountains. 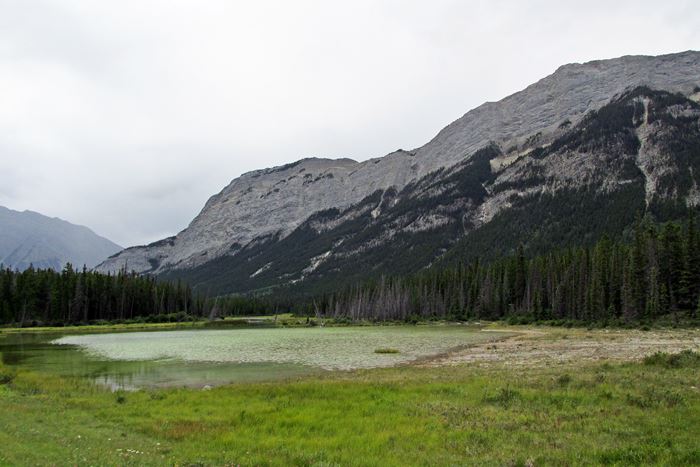 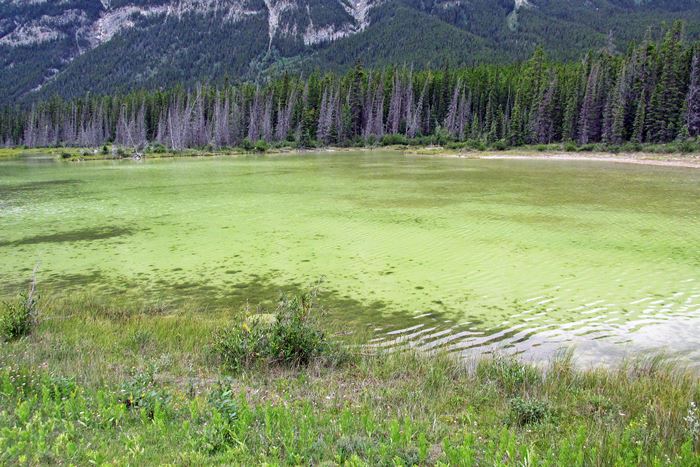 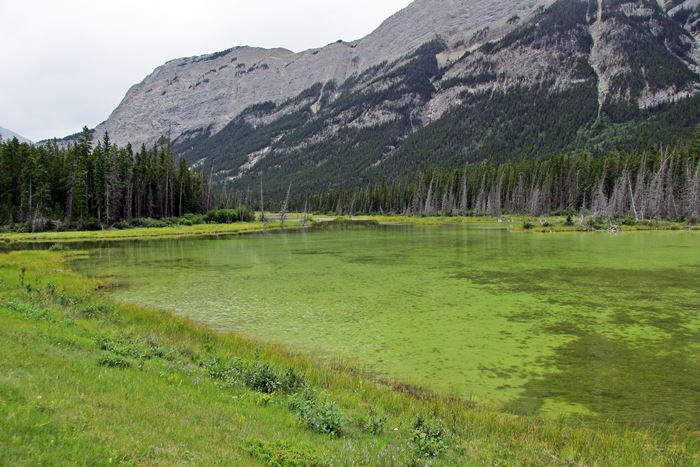 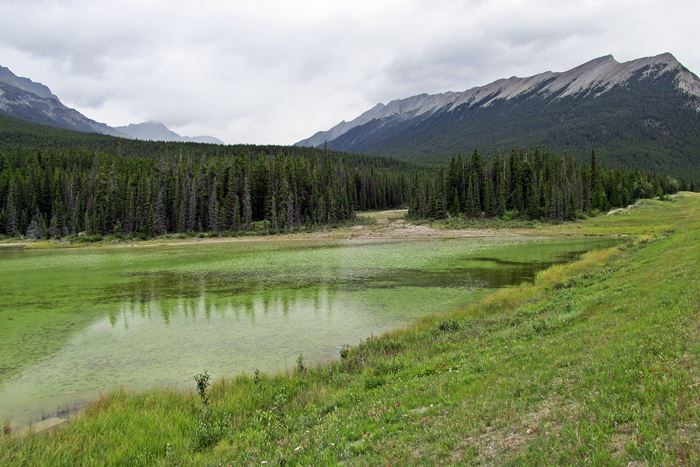 To the north of the emerald ponds is the prominent, short, steep hike on Vision Quest.  The hike into Little Indian Falls is a worthwhile venture for a half day hike with plenty of opportunity for bonus highlights.

Photographs for the hike to Little Indian Falls were captured on Saturday, July 25, 2015 north-east of David Thompson Resort on the David Thompson Highway (Hwy 11) near Abraham Lake in Bighorn Backcountry, Alberta, Canada.