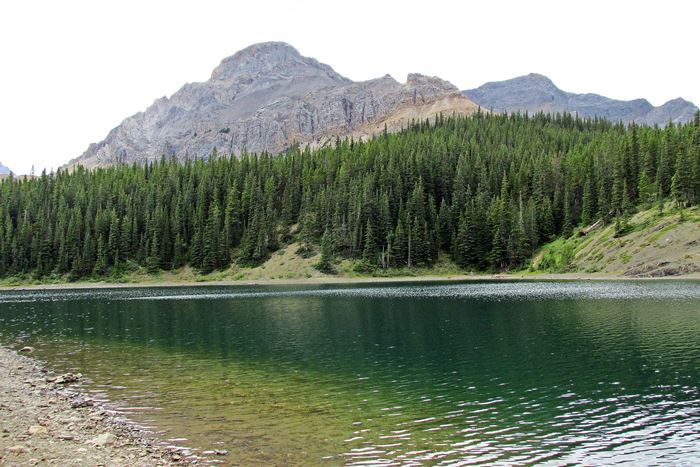 Allstones Lake should be planned as a full day hiking adventure.

The trail-head for Allstones Lake is obvious on the David Thompson Highway southwest of Tershishner Creek and perched above the northeast side of Allstones Creek.

A small parking area on the opposite, southeast side of the David Thompson Highway affords an excellent view over picturesque Allstones Cove and an adjacent wilderness camping area above the shoreline of Abraham Lake.

Abraham Lake is a large, aquamarine reservoir created by the Bighorn Dam.  From the other side of the David Thompson Highway there is an outstanding view of Mount Michener soaring above the far shoreline of Abraham Lake across from Windy Point.  This is an incredibly beautiful place.

Before tackling the Allstones Lake hike, it is worth the time to detour south for a view into the rocky abyss of Allstones Creek.  On another day, it is an excellent mission to take the short hike and easy scramble up Allstones Creek to a waterfall.  There are many water crossings so appropriate footwear is important.

The Allstones Lake is a round trip of 13+ KM (8⅛ miles), to a maximum elevation of 1,890 m (6,201 ft) with worthwhile options which can extend the day substantially.

The start is late following the excellent, morning hiking adventure to Tershishner Falls.  The Allstones Lake hike has an elevation gain near 450 m (1,475 ft).  It seems like more, and can be more with options.  Gross elevation is marginally higher than net.  From the high trail intersection, there is a descent to Allstones Lake.

The Allstones Lake hike begins with a steep climb up the hill at roadside on obvious trail to the first of two trail signs.  A deceiving level section leads to a relentless, wind-sucking climb through forest which soon eliminates all visual evidence of Abraham Lake.  It is not helpful this day is hot.

The trail meanders through lush and varied forest as elevation is gained rapidly.  Initially the trail tracks along the top of a drainage before veering away to the right.

There is one tiny creek crossing over an old wooden log bridge with character.

There is no alternative but to pause periodically to soak up the vistas on the relentless climb.  Path quality erodes with altitude gain.  Footing is less secure.

The west horizon is consumed by the immensity and beauty of Abraham Mountain  which provides reference for the location of Allstones Lake at its base.

The trail varies in pitch and one particularly beautiful section levels through meadow before a final stretch of ascent leads to flat path across steep-slope, avalanche chutes where foot placement trumps the enjoyment of spectacular scenery while feet are moving.

There is an enticing, alternate trail heading right to the ridge summit which is passed in favor of the main trail to Allstones Lake.

A half dozen of these short sections on steep scree slope interrupt the trail before a final climb over dead fall arrives at an obvious, four-way junction without signage.

Eventually, the main trail leads to a major, four-way intersection.

The turn right climbs further to the top of the ridge.  The trail to the left is more heavily used and likely leads down to the campground at the south end of tiny, sub-alpine Allstones Lake.  Logically the path straight ahead, which is less traveled, may lead to the north end of the lake.  Nothing ventured: nothing gained.

The trail is rustic, and navigation occasionally borders on bushwhacking, but it is in gradual descent.  After travelling uncomfortably further than expected, the trail reveals the final approach to Allstones Lake.

There is a short bit of maneuvering from the trail down to the shoreline.  Sitting on a log along the beach becomes an excellent way to enjoy lunch surrounded by absolute splendor.

One's presence is dwarfed by the immense and powerful surroundings.  There is no-one else here.  The mountains, the forest and the pristine, crystal-clear water belong to me at this moment.  The silence is deafening.

The sounds of shoreline rippling waves mixed with bird calls and fish breaking the lakes surface are magnified by echoes from surrounding rock.  Perhaps there is wildlife, patiently waiting in surrounding forest for me to move on so they can continue with their daily routine.

The effort is more than justified.  I am home.

Multicolored Abraham Mountain towers over forest on the west shoreline and Mount Michener a significant distance away, appears larger than it should on the far shore of Abraham Lake.  This place is magic.

There is a trail around the lake in forest above maximum waterline but waters levels are sufficiently low, on this day, to allow hiking along the rocky beach to the opposite end of Allstones Lake.  There is an unoccupied wilderness campground here and a primitive biffy with little to offer in the way of privacy.

Following a final appreciation of this special place, there is nothing left to do but load the Katadyn filter with lake water and climb the shorter route to the four-way junction.

The trail intersection above Allstones Lake on ascent from the south end.

A strong desire to climb to the top of the ridge is replaced with the common sense of returning on the route taken up.  If Tershishner Falls had not consumed a good portion of the morning, the hike for the views from the ridge top would have been included in the agenda.

This warm day has become tiring and the sun is getting low in late afternoon.

The views across Abraham Lake with surrounding mountains are spectacular.

From the first meadow, there is one look back to impressive Abraham Mountain before plunging through forest past oddly shaped trees on the descent.

The rustic wooden bridge over the tiny creek, and the trail converging on the top of the Allstones Creek drainage provide visible evidence of progress.

The Allstones Lake hike should be planned as a full day adventure.  This effort following Tershishner Falls began at mid-day on a very warm afternoon which made the steep climb more arduous than it would have been in the cool air of early morning.  Additionally, there would have been time and energy to pursue the route to the ridge summit above Allstones Lake.

The surrounding views are expansive and breathtaking.  There would also have been time to pursue a portion of the alternate and arduous Mud Creek descent.  A loop seems possible but needs to be well researched.

Solo descent, on the arduous route requiring scrambling along Mud Creek, is discouraged.

The final event for this spectacular hiking day is check-in and a hearty supper at David Thompson Resort where accommodation will be provided for the next three days.  Lodging is in the same comfortable room occupied the previous summer.

Photographs for the Allstones Lake hike in Bighorn Backcountry were taken on the afternoon of Friday, July 24, 2015.