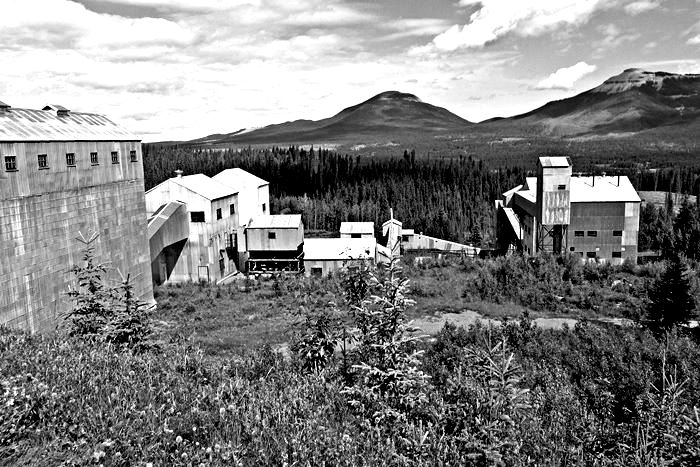 The approximately two-hour-long tours begin from the prominent Nordegg Heritage Centre and alternate between mornings and afternoons.  The sequence is not critical but there is a small justification to attend the Upper Mines Tour first to follow the production path of the coal.

A short drive behind the guide's vehicle travels beneath the Railroad Trestle and turns right into the restricted-access Brazeau Collieries National Historic Site of Canada, to gravel parking near the Vault (all that remains of the Main Office) and Mine # 2 Hoist House.

There is a magnificent view across the Tipple, Briquette Manufacturing Plants and the valley to Baldy Mountain (Shunda Mountain) and Coliseum Mountain on the north horizon.

In 1937, five small, wooden, manufacturing plants are added to create coal briquettes.  At that time, the railway is converting from shoveling of raw coal to auto-feeders which use briquettes to fire the steam locomotives.

The wooden tipple and briquette plants burn to the ground in 1950 and borrowed money creates new, modern metal and concrete tipple and briquetting plants which go into production in 1951.  These are the buildings still standing today.

The market for coal collapses in 1955 when railroads convert from coal to diesel powered locomotives and production at Brazeau Collieries is rapidly abandoned.  Nordegg is summarily evacuated.

The walking tour begins through Mine # 2 Hoist House, where coal is hauled by electrically-powered, mechanical winches, and shuttled to Rotary Dumps for transport into the Tipple.

The back of each Hoist House is a breakaway, for protection, in the event the human-controlled winch clutch fails, the damage caused by the out-of-control chain of coal cars would be less likely to destroy the entire Hoist House building.

Each coal car is placed in the Rotary Dump so it can be turned upside down onto a reciprocator feeding a conveyor into the tipple for coal sorting.

The environment is still and quiet today but the operation of the time would have been incredibly noisy, dirty and dusty.

Each coal car is weighed.  Miners are independent contractors and each miner is paid according to the amount of coal mined.

A small percentage of rock is permissible but over the limit requires the coal car to be removed from the line for sorting at a nearby shed.  Proceeds from the out-of-spec coal cart are lost to the miner and donated to the Christmas Party Fund.

The coal is sorted by size in the Tipple and sent by covered conveyor to the first building for manufacturing of the briquettes.

This huge operation is carried out in long, narrow and poorly lit buildings.  In simplest terms, the coal is cooked, ground into powder, mixed with tar imported from Lethbridge, Alberta, and then the mixture is pressed into briquettes through rotating dies pressed together at very high speed and pressure.

The coal is held by size in temporary storage bins in long rows where release handles empty the required coal onto conveyor belts beneath the bins.

The majority of the coal proceeds to briquette production and some is sent by conveyor to the Wash House.  The coal is 'cooked' by heating it.  Shoveling coal into these ovens was purportedly the worst job in the entire plant due to the intense heat in cramped quarters.

The following pictures are representative of a few sections within the plant.  To be honest, the amount of complex and massive machinery within the buildings is virtually impossible to photograph in tight quarters within a short touring time frame.

The immense briquette plants are fascinating.  After the briquettes are created they travel on long, slow-moving, conveyor belts for air cooling and storage in preparation for loading onto railroad cars for shipment to market.

The production flow schematic, from one of the interpretive signs is included for reference.  It may be helpful and meaningful to people more familiar with the production of briquettes.  Briquette manufacturing is a large and impressive operation.

Briquettes are loaded into railroad cars to maximum weight restrictions.  Each railroad car is placed on a mechanized rocking platform to ensure loading is even and compact.

The railroad car then moves to the weigh scale to determine load restrictions are not compromised.

The tar transfer and storage sheds are adjacent to the briquette loading and weighing operations.

Decades have passed since tar has been heated and pumped into the briquette production plant for mixture with coal powder, but tar still seeps very slowly from pipes more than sixty years after the operation was shut down.

Two heavy wooden beam buildings have been newly reconstructed in a clearing near the rail car weighing station and the tar transfer installation.

It is a fascinating place and the immensity of the operation dwarfs our presence and the relative silence this day defies the reality of a busy and noisy industrial operation.

Beside the briquette manufacturing plant, and behind the tar processing location, there are massive coal slack piles.

There are only four of us on this tour.

A short walk takes us through tall grass to the old weigh station where freight cars, loaded with briquettes, were weighed to determine compliance with restrictions before being moved on their way to markets.

From the weigh station we return uphill partway past the plant and turn left into an old residential area.

The first old building encountered has nothing to do with the mining production complex.  It is a squatter's dwelling which was in place prior to the beginning of mining operations in 1911.

Offers from Brazeau Collieries to purchase the property were declined and all the substantial development unfolded around the settler's property.  Some restoration work has been completed on the more-than-a century-old structure which includes outer buildings and even a small, fenced garden.

Further up the road there are formidable homes of the time which housed influential people key to the operation of the mining complex.

One of the larger structures is a residence for professional women which housed teachers and nurses working at the nearby town school and one of the best hospitals in Alberta during the boom era of Brazeau Collieries when the town numbered more than three thousand residents.

The mining operation created, then supported, the town of Nordegg.  This coal mining operation was an impressive display of entrepreneurship, benevolence and cooperation in an environment free of bureaucratic impediment and greed.

Back near the parking area, we pass a large concrete monolith hosting the remains of a gaping and mangled metal door frame.  This is all that remains of the large Main Office which towered over the controlled entrance to the mine.  We are told the old vault was dynamited by criminals in the 1980s to determine and steal contents.

In the five decades following mine closure there has been horrendous vandalism which continues on a small scale today.

There are serious financial and criminal prosecution penalties for unauthorized visitors and gradually the site is becoming more secure for the benefit of future generations who can learn fascinating and valuable lessons here.

The viewpoint from the top of the hill, where the Main Office stood before its destruction, is surrounded by wildflowers and the expansive vistas across the valley offers outstanding views of the communication towers and the Fire Lookout at the top of Baldy Mountain (Shunda Mountain) as well as the prominent Cap on the summit of adjacent Coliseum Mountain.

The tours of Brazeau Collieries National Historic Site of Canada provide a fascinating walk through history in the presence of fascinating repertoire.  Highly recommended.

This afternoon of the final full day in Nordegg will be spent hiking short, scenic trails at Goldeye Lake and Fish Lake just west of Nordegg on the David Thompson Highway through Bighorn Backcountry, Alberta, Canada.

Photographs for this excellent and educational tour of Brazeau Collieries were captured above Nordegg, Alberta on the morning of Thursday, July 23, 2015.