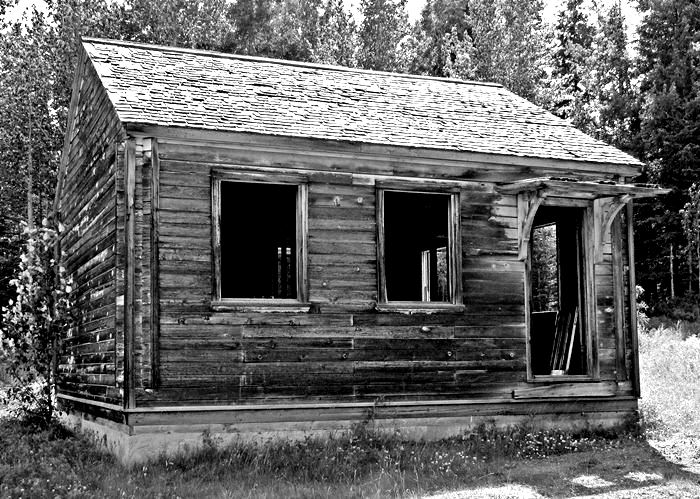 Tours begin daily from the Nordegg Heritage Centre between mid-May and mid-October, weather pending.  Call or email ahead.  The tour is an excellent opportunity to visit remaining infrastructure, for a nominal charge, at Brazeau Collieries which operated at historic Nordegg between 1911 and 1955.

There are two, quite different tours at the location designated as a Provincial Historic Resource in 1993 and as a National Historic Site of Canada in 2002.

The Upper Mine Tour for a dozen participants begins at 2 PM with a short drive from the Nordegg Heritage Centre to parking at the restricted site.

The following reference map may assist in location of buildings on the Upper Mine Tour.

The tour begins with a short drive behind the Guide's vehicle form Nordegg Heritage Centre to parking at Brazeau Collieries followed by short walk to the Wash House.

Coal miners began their day with a walk uphill from town on Miner's' Path.  At the end of the day, followed by a change into clean clothing, miners returned home on Miner's Path.

Metal screen lockers remain in disarray inside the Wash House.  A few stand upright for display.  Metal pipes, shower heads and wash stands remain partially intact and there is evidence of restoration underway.

Three vintage automobiles deteriorate slowly beyond the exit from the Wash House.

From the Wash House the tour moves on to the Boiler House and the Generator (Power) House plus Repair (Machine).  Each of the buildings is accompanied with detailed interpretive plaques which present far more comprehensive information than  can possibly be provided here.

In addition, the knowledgeable guide embellishes posted information with entertaining anecdotes that help to bring the environment to life.

Many of the bricks were removed as make work projects when Nordegg hosted a minimum security prison long after the mine was closed and abandoned in 1955.

The tour moves on from the Generator House past the Blacksmith/Carpenter Shop and the Electrical and Locomotive Repair Building to the Lamp House.  Along the route there are multiple pieces of mining equipment.  The remnants of the mining operation are likely far better organized than they appear.

The Lamp Cabin is an integral component of all mining operations of the era.  In simplest principle, miners on the way to their shift leave their brass tag at the Lamp Cabin in exchange for the headlamp which is ready for the day.

Each tag hangs in numerical sequence on a board.  At the end of the shift, the process is reversed and pickup of tags from the board determine every miner has returned safely from the mine.

A short distance past the Lamp Cabin is the entrance to Mine # 2.  There were 5 coal seams discovered in 1911.  The two most lucrative and convenient seams were two and three which generated shafts created for Mine # 2 and Mine # 3.

Even these two shafts were not exhausted of coal supply when the mine closed in 1955.  Late in the mining operation, surface mining from strip mines complemented the underground shafts.  The strip mines are not part of the tour.

Other functions ancillary to the Lamp Cabin were the Mine Rescue Station, the Rock Dump and the Blasting Components Shed.  Each of these are explained by the tour guide.

Both mine shafts were sealed when Brazeau Collieries ceased operation in 1955.

Mine # 2 has been excavated and restored to a depth of 16 feet for the benefit of visitors.  Giant exhaust fans, which exchange foul for fresh air, are resident near the mine shaft entrances.  The huge fans are accessible but non-operational.  Air venting from beneath ground is quite cold.

Horses made a significant contribution to the overall mining operation.  The tour passes the partially restored Ferrier Shop along the way to the entrance for Mine Shaft # 3 and the accompanying exhaust fans.  The original horse barns are gone.

From the Mine # 3 Portal, the platform bridge over Cabin (Mine) Creek leads to a left turn which accesses the isolated, forest-surrounded, and partially subterranean Powder Magazine.

Beyond the immediate forest there is evidence of a past forest fire which came incredibly close to destroying the entire mine complex.

From the Powder Magazine the path leads to road on the opposite side of Cabin (Mine) Creek which returns past the Lamp Cabin, old coal cars and a long string of long-abandoned mining equipment.

The partially restored Electrical and Locomotive Shops are a precursor to the Carpenter and Blacksmith Shop where repair to equipment was a constant requirement.

Coal miners who worked at Brazeau Collieries, and their descendants, have made, and continue to make, huge contributions to the reconstruction of the site.  Their passion for preservation of this historical treasure is well-recognized and deeply appreciated in the community.

The remarkable contribution is a gift to preserve an important segment of history in the development of Western Canada.

Coal Mine Scar on Mount Allan in Kananaskis Country, west of Calgary, Alberta, Canada was a subsidiary operation of Brazeau Collieries at Nordegg before coal markets collapsed.

Exit from the Carpenter and Blacksmith Shops is adjacent to the Parts Warehouse where rows of wooden bins are labelled with their contents which include all the nuts, bolts, screws and unique parts for repair to, and maintenance of, a plethora of diverse mining equipment.

Interpretive plaques at each building carefully document the in-depth purpose, function and history of each facility and how it fits into the overall mining operation.  The interpretive information is presented in clear, concise, English language and provides a comprehensive education for the components of the mining operation.

To the left there are remnants of long abandoned, and unfortunately vandalized vehicles as well as the remains of original homes.

Some limited restoration has been affected to reduce further deterioration.  Off roadside there are a few mysterious structures abandoned in the forest, for those with a keen and curious eye.

The tour nears completion with a visit to two of the original miners homes.  The first has received only minimal restoration to protect the building from further deterioration and the second building has been more fully restored to illustrate the end result.

There is a dramatic difference.  Our young but well-informed Interpretive Guide shares fascinating stories about the occupants and discusses European architectural influences.

The Upper Mine Tour winds down with a walk past the Rotary Dump and Mine # 2 Hoist House which used electrically powered winches to haul loaded coal cars for dumping at the Tipple.  This is where the separate and independent, second tour of Brazeau Collieries begins.

Tour ending is at the viewpoint overlooking the Tipple and Briquette Manufacturing Plant near the parking area where the tour began.

The view across the impressive mining complex is memorable against the background on the far side of the valley hosting Baldy Mountain (Shunda Mountain) and Coliseum Mountain.

The Upper Mine Tour at Brazeau Collieries takes about 2 hours depending on group size and the number of questions asked.

The fascinating tour is an easy walk on good, relatively flat path.  The experience is an educational and entertaining glimpse into the past.

We are better equipped to decide where we are going if we know where we have been.  Information on the Interpretive signs is well done and very educational.

The tour is dramatically enhanced with additional verbal information and stories provided by the Interpretive Guide.

Photographs from the Upper Mine Tour above Nordegg, Alberta, Canada were taken on Tuesday, July 21, 2015.