Nordegg is a fascinating and richly historic hamlet within Clearwater County at the east end of Bighorn Backcountry west of Rocky Mountain House in Alberta, Canada. 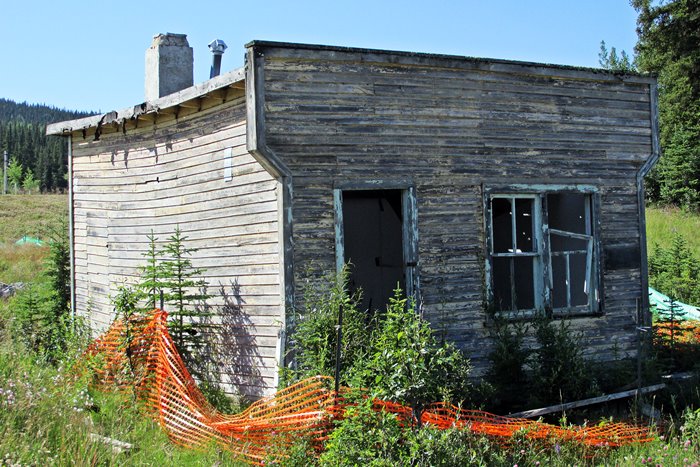 On the 97 KM (61 mile) drive west from Rocky Mountain House on Highway 11, views of Coliseum Mountain looming over the north side of the town and the Nordegg Ranger Station are iconic indications of imminent arrival at the turnoff to Nordegg.

The Nordegg Ranger Station is closed  (July 2015).  Although there is evidence of parks maintenance activity continuing from the site, signage refers public interface to Alberta Parks in Rocky Mountain House.  Something has gone seriously wrong.

The turnoff to Nordegg is clearly signed and a brief drive south beyond the entrance sign passes the historic 9-hole golf course, Nordegg Lodge, the General Store and an intriguing array of roadside businesses. including the Beer Cabin and the Sugar Shack and Wienery, prior to arrival at the Nordegg Heritage Centre which was previously the Nordegg School, built in 1945 after the original schoolhouse burned down.

The hamlet of Nordegg is located at the east end of Bighorn Backcountry in one of 6 PLUZs (Public Land Use Zones).  Each PLUZ has specific land use criteria which  are important to understand and follow.  The Nordegg Area PLUZ contains a labyrinth of trail possibility for a wide variety of disciplines.

Baldy Tower Lookout and communication towers, on Mount Baldy (Shunda Mountain), occupy the summit adjacent to distinctive Coliseum Mountain which looms over the north side of the hamlet.

There is a Bighorn Backcountry map and individual maps for each of the six PLUZs.

Current copies were available free from the General Store.  The maps are aerial photos of the areas with a partial overlay of features and trails.  Not all features are named.  Past sins have created a matrix of trail.  Not all trails are shown.

Signage can be scarce or non existent.  Mountains are not always named on the maps.  There is substantial room for improvement. 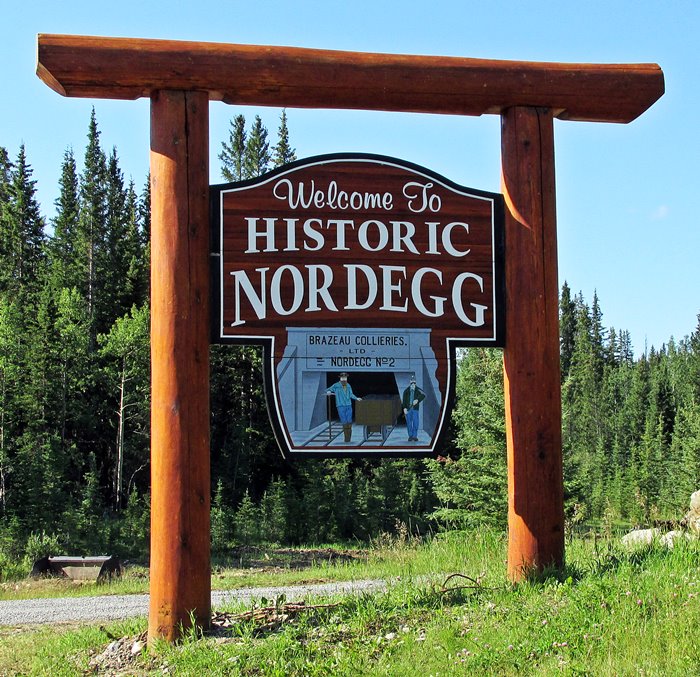 A white picket fence encloses the cemetery markers (restored in 2003), and an impressive headstone lists the names of the 29 miners who lost their lives in the underground explosion at Mine # 3, in Brazeau Collieries worst mining accident on October 31, 1941.

Several exhibits of authentic mining equipment are on display along the periphery of the Nordegg Heritage Centre. 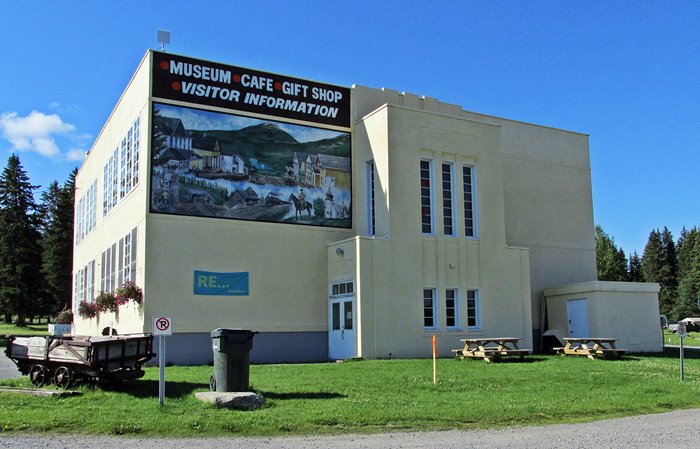 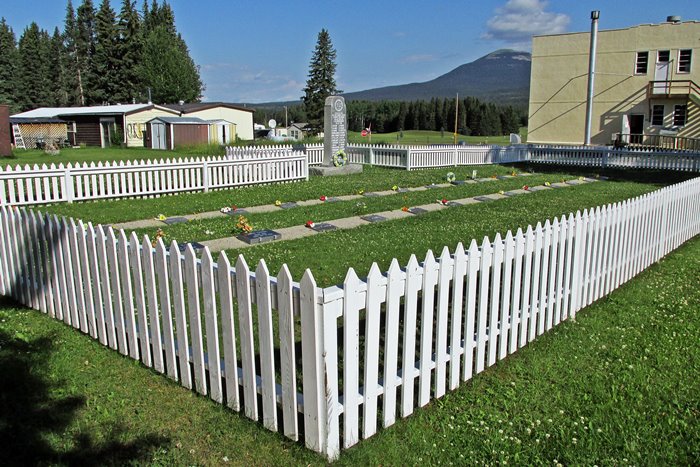 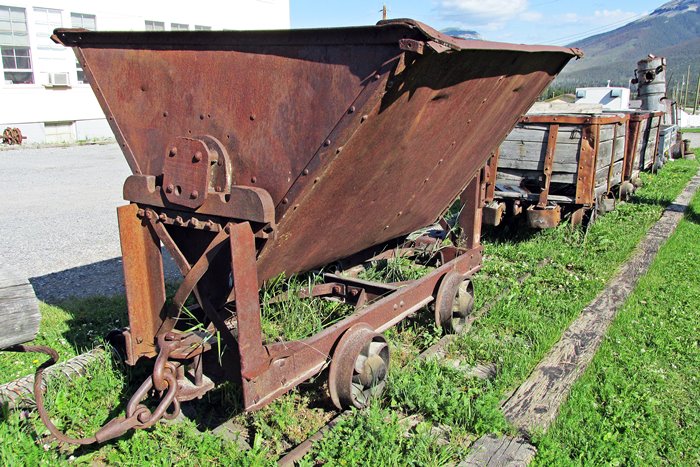 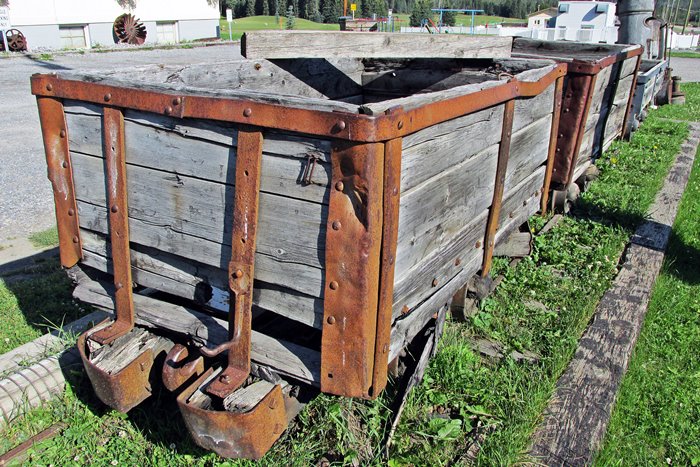 A brief drive past the cemetery and through a new area of home development leads under the old railroad mine Trestle, built in 1913, to the gravel road entrance and into the Nordegg National Historic Site.  Fence and signage clearly identify the site as restricted.  The site is accessible exclusively by guided tour only.  There are stiff penalties for unauthorized invaders.

In the past 60 years there has been significant damage inflicted on the historical site by weather, circumstance and vandals.  There are ambitious plans to restore the site.

In 1993 the Brazeau Collieries site was designated as a Provincial Historic Resource and designation as a National Historic Site of Canada occurred in 2002. 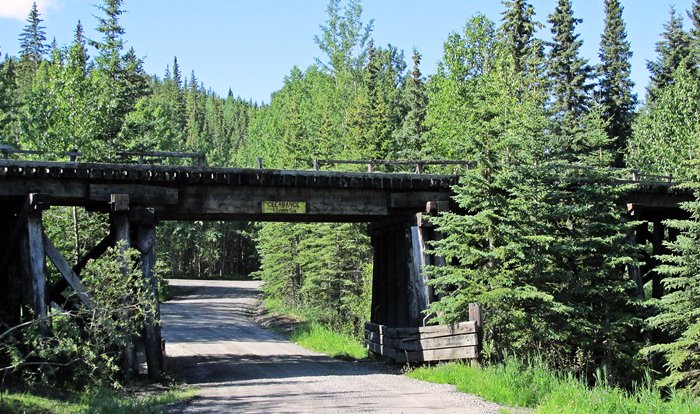 On this sunny day, there is time to wander among some of the historic buildings in Nordegg before the afternoon Upper Mine Tour at the Nordegg National Historic Site.

The story of Brazeau Collieries begins in 1907 when Martin Nordegg, from the German Development Company, is invited to participate in the Geographical Survey of Canada.

Five significant coal seams are discovered near the confluence of the Brazeau River and the North Saskatchewan River.  Claims are laid.  A small camp is established in 1911 and coal production begins in 1912.  Railway lines are constructed to take the coal to urban markets dependent on coal for fuel.  Production is maximum in 1923 above a town of nearly 4,000 people.

When the railroad converts to diesel fired engines, and home heating is aggressively being replaced with cleaner electric and gas fuel systems, coal markets collapse and Brazeau Collieries closes forever in 1955.  Evacuation is rapid.  The little town of Brazeau is a ghost town.  The mine is left standing in suspended animation but in good condition.

Over time. fascinating stories document a tiny town with a huge, committed heart refusing to be eliminated.  The town is renamed Nordegg in honor of its principal founder.

Evidence of the original town remains in evidence although seriously diminished.  Old town street systems were modeled after a street plan for a Mount Royal subdivision in Montreal.

In 1911, the collaborative effort between Canadian Northern, constructing the Montreal Railway, and Brazeau Coal are clearly evident in the rapidly diminishing layout within present day Nordegg.

A brief walking tour around the area and a short drive onto Hospital Hill back lanes reveals old treasures.  A brochure called 'Self-guided Walking Tour of Historic Nordegg' is available at the Nordegg Heritage Centre will be extremely helpful.

On Protestant Church Hill, the original church burned down in 1975.  The current place of worship creates a commanding presence above the hamlet. 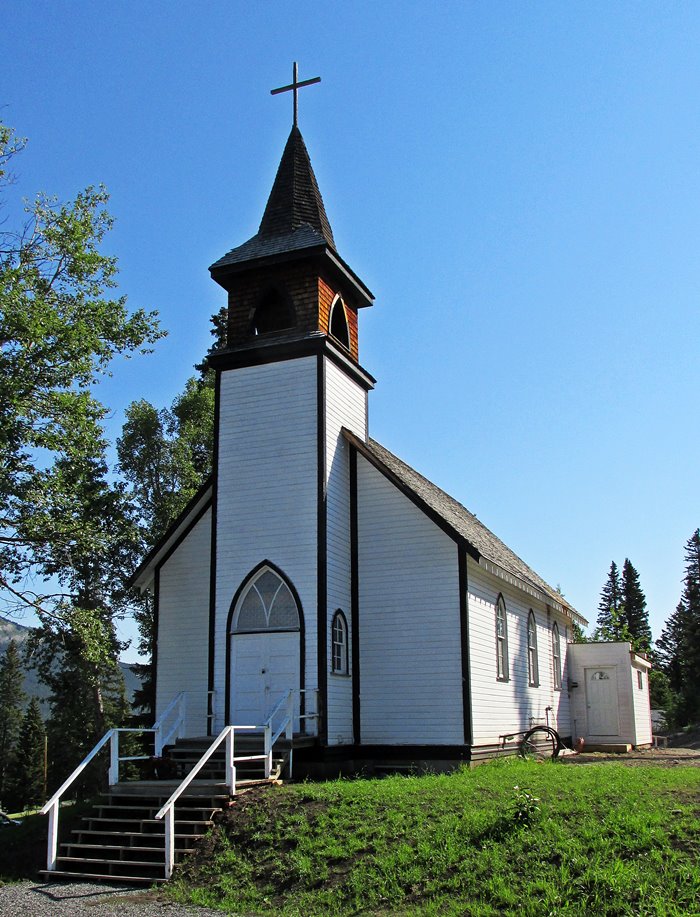 The original structures for Shanks Garage are awaiting restoration. 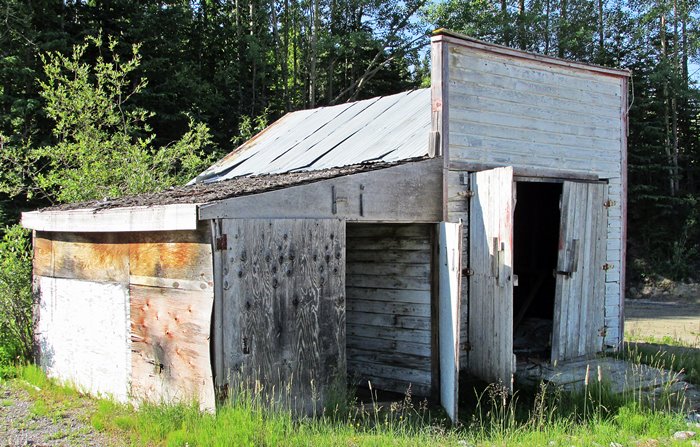 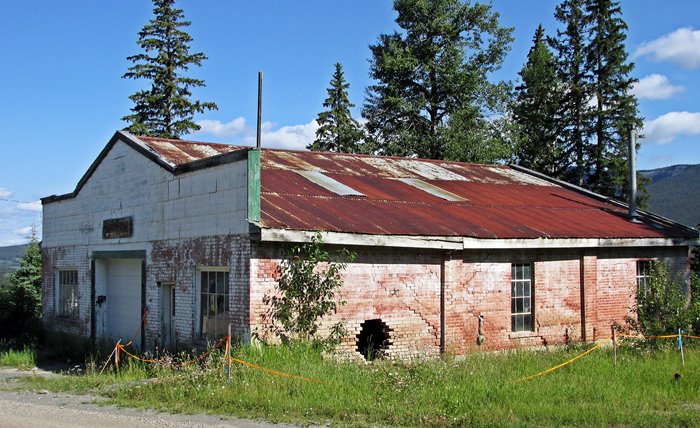 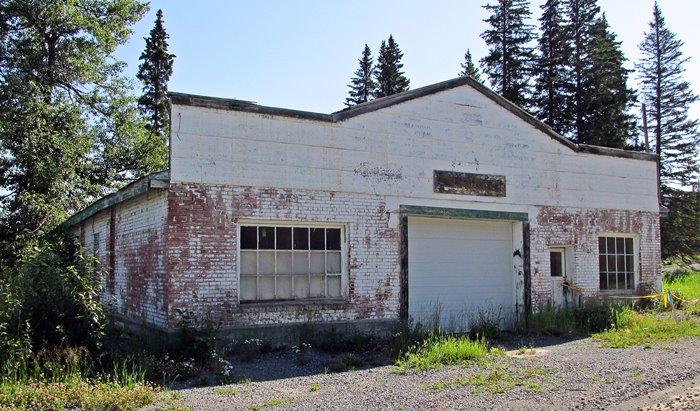 The following structure is on Centre Street but it's function is uncertain. 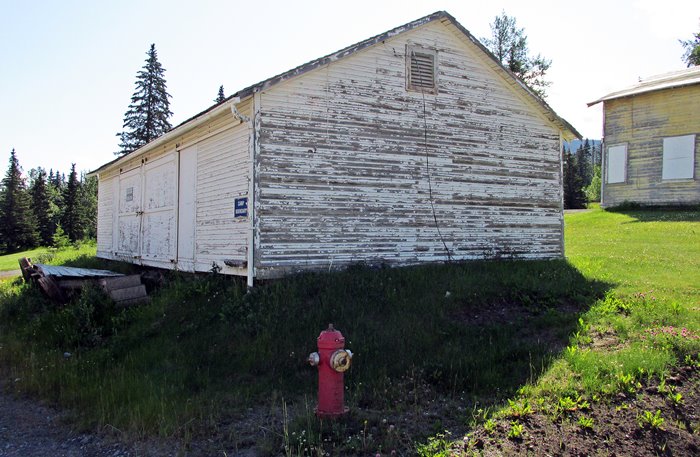 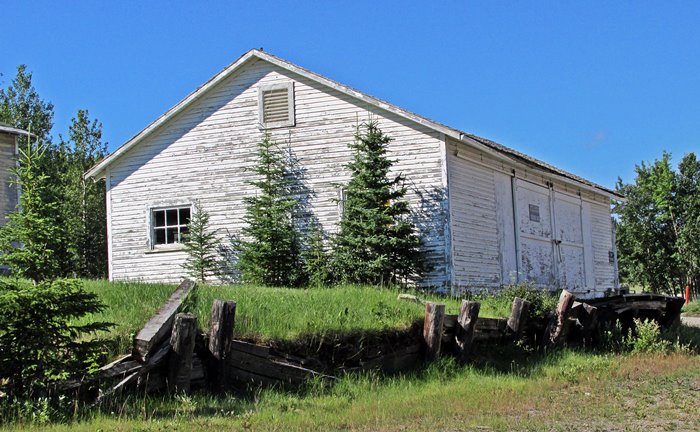 This building below was the CIBC Bank.  The sagging building is waiting for restoration.  Is there an opportunity for present day CIBC to participate? 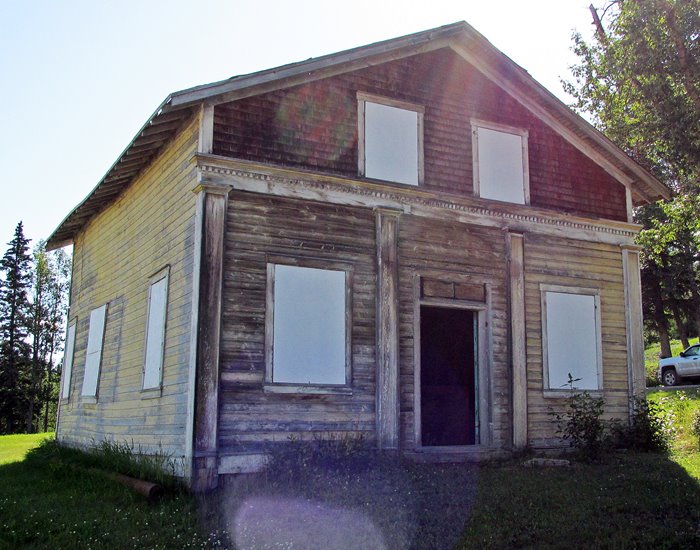 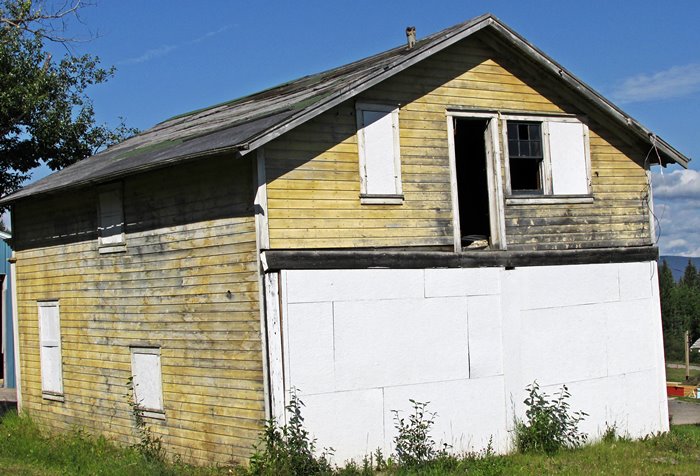 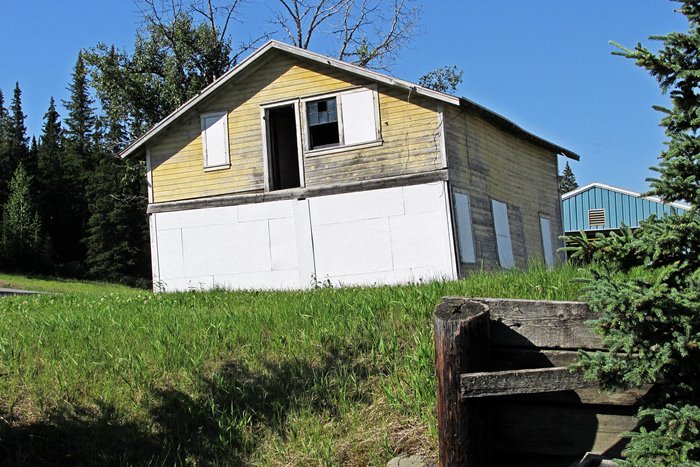 The Bighorn Store is an impressive brick structure on Centre Street waiting for restoration and interpretive information which will restore its contribution to the hamlet of Nordegg and the surrounding community. 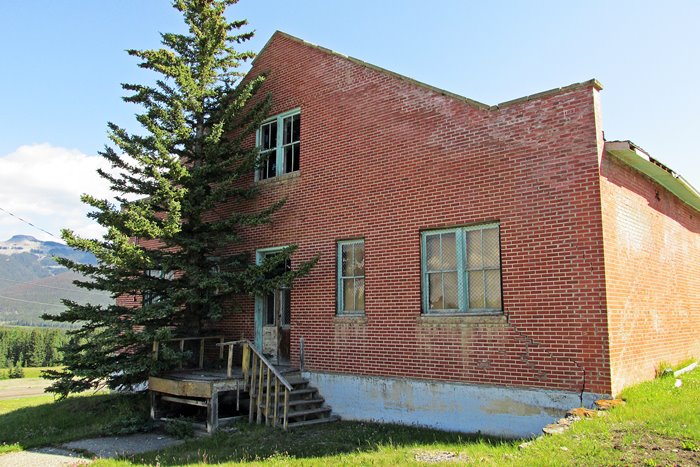 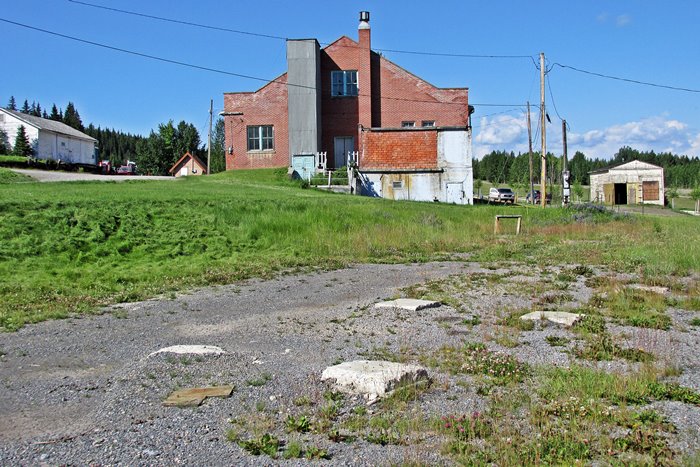 The historic structure below is on the west side of Centre Street and may be the 'White Shed' awaiting restoration and interpretation. 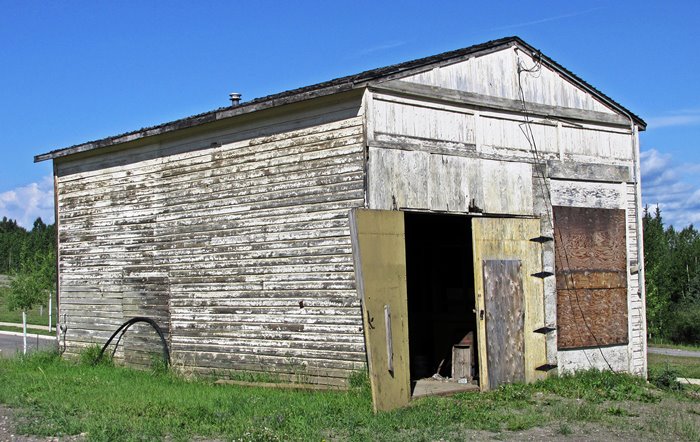 North on Centre Street hosts the boarding house which was constructed in 1949 to replace the original which burned down.  There are photographs on the walls of the Nordegg Lodge Restaurant, and at the Nordegg Heritage Centre, which document the appearance of the original.

The current boarding house was used later on to house inmates incarcerated at a minimum security prison which was closed many years ago.

There is an old, sagging structure in desperate need of resurrection along Centre Street. 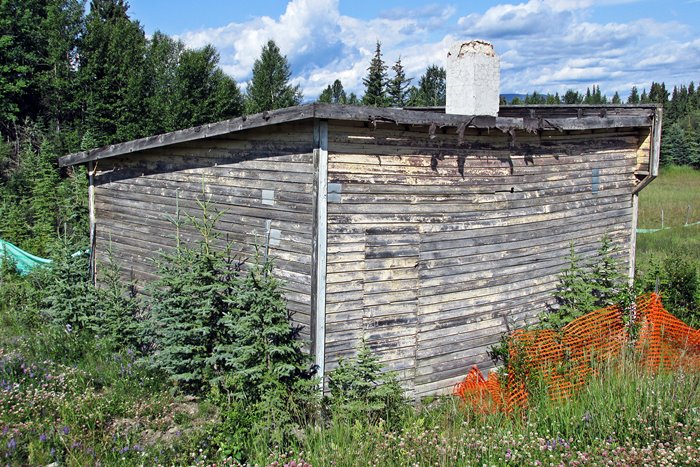 Back roads on hills to the south host hidden treasures like this shed, hidden in forest off-road, containing what appears to be electrical equipment.  The shed is located beneath a picturesque water source created by a very old concrete dam. 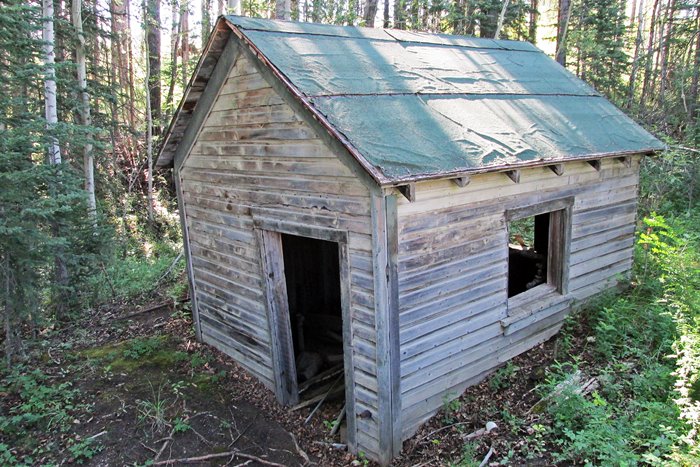 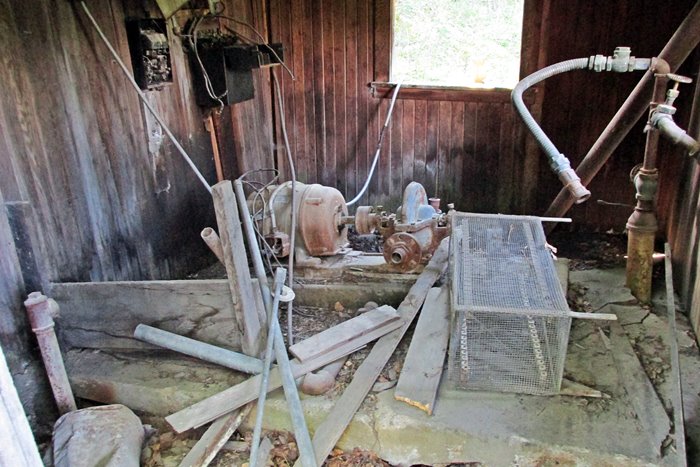 Above the shed containing electrical gear and water pipes, there is a water source created by an old concrete dam, with the gravel road running over the top of the dam. 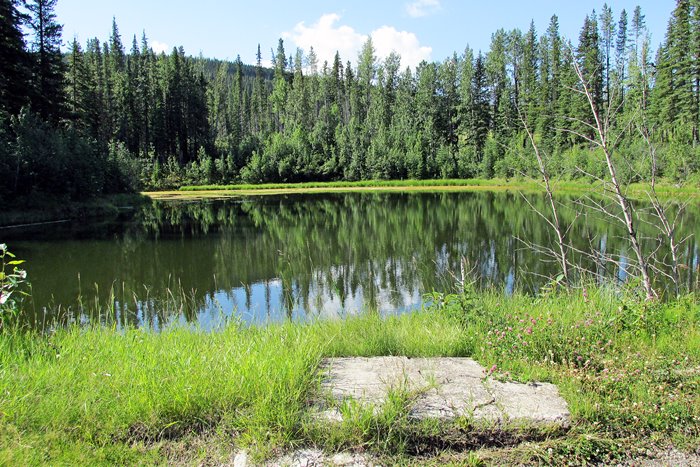 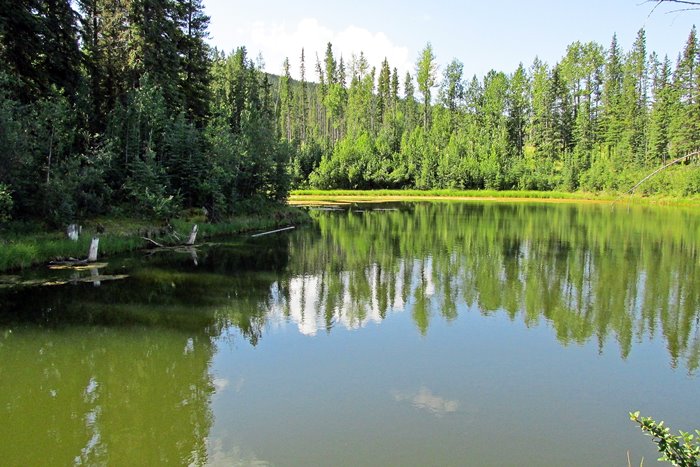 From the Walking Tour brochure (available at the Nordegg Heritage Centre),

Within the short time available, it is possible to see only a small portion of the remaining structure of the original town.  On a return visit, several days could be spent on a walking tour of this fascinating and historic place.

The remainder of the morning is spent touring the historic and current cemeteries before lunch prior to the guided Upper Mine Tour in the afternoon.

There is an organized and coordinated effort by citizens in Nordegg and Clearwater County to develop and restore what has the potential to become one of Alberta's, and potentially Canada's, most interesting and profound historical attractions.

The opportunity here may not be immediately obvious at a casual glance but the potential to heal past sins and establish Nordegg as a world class recreational attraction, is huge.

Embellishing the important role of early discovery and hard work at the doorstep to the Rocky Mountains and developing the eastern portal along the David Thompson Highway (Hwy 11) into Banff National Park near Saskatchewan Crossing has lucrative, long-term potential.

The opportunity is huge and the efforts of Clearwater County is appreciated in their ongoing, decades old focused initiative to help everyone else understand the significance and importance of this huge opportunity.

Assets are deteriorating and there is not a lot of time left.  The need for significant, visionary financial aid is urgent.  A concerted effort from all levels of government in combination with corporate awareness and investment can make this happen.  There are encouraging signs of the possibility.

Photographs for this fascinating and enlightening day were captured in Nordegg, Alberta, Canada on Tuesday, July 21, 2015.