The History Loop begins at Colonel's Cabin across Kananaskis Trail from Barrier Lake in Kananaskis Country west of Calgary, Alberta. 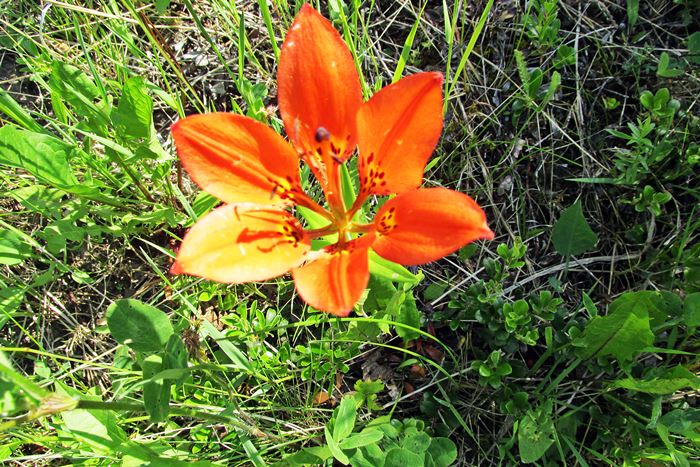 Heading south on Kananaskis Trail, the left turn is at the large green and white sign for the University of Calgary, Bio Geoscience Institute, Barrier Lake Field Station.

Immediately, a signed left turn to Colonel's Cabin and Guard Tower # 8, initiates a short drive on paved road to the Veterans Guard of Canada memorial plaque with overhead flags.

This is the site of World War II Seebe Internment Camp Number 130.  The plaque was placed here in 1999 by the Kananaskis Rotary Club to honor the veterans of World War l.

Parking in shade near the memorial plaque at the tiny, cul-de-sac adjacent, picnic area provides a short path to the trail-head kiosk near the Colonel's Cabin and Guard Tower # 8. 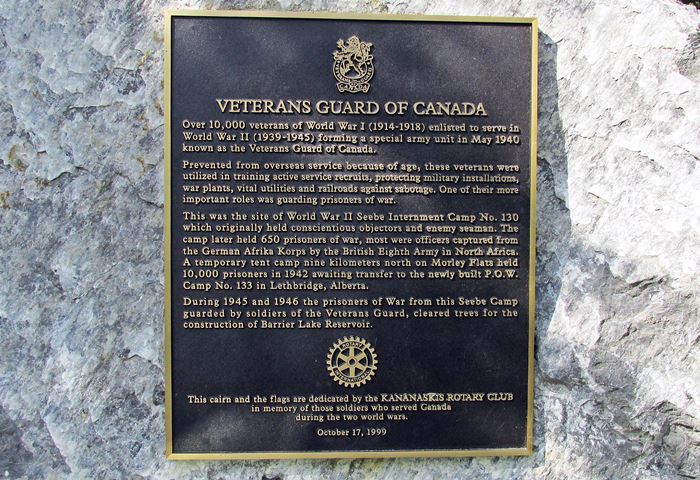 The Colonel's Cabin and the Guard Tower exhibits are closed until further notice.  This is an Alberta Provincial Historic Site.  The cabin is locked and apparently empty.  All the exterior brochure holders are empty. 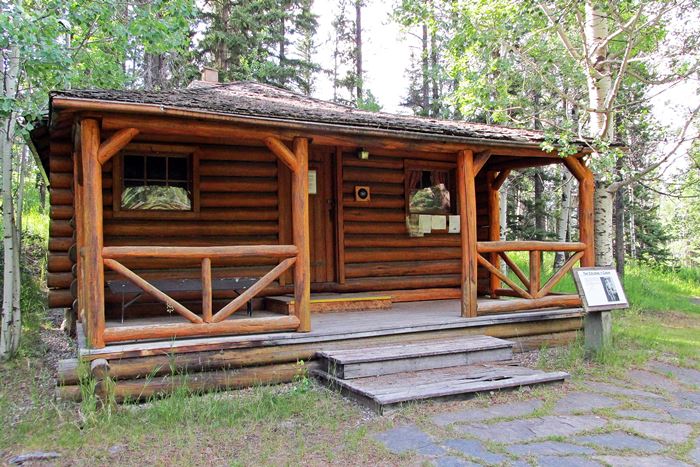 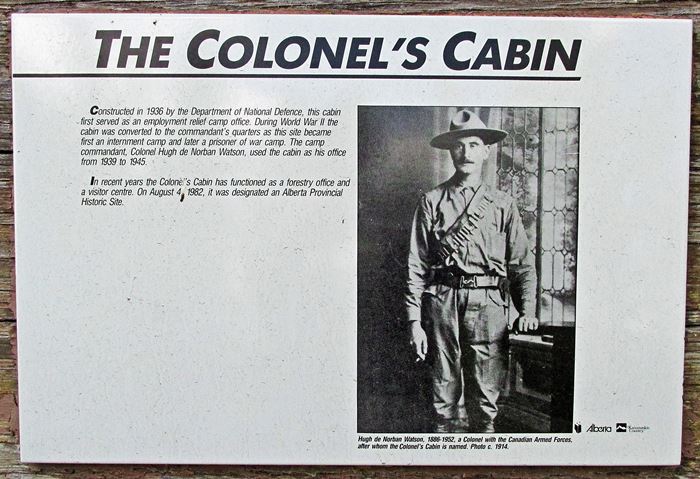 Informative interpretive plaques at Colonel's Cabin and Guard Tower # 8 provide some insight into the fascinating and important history of this location. 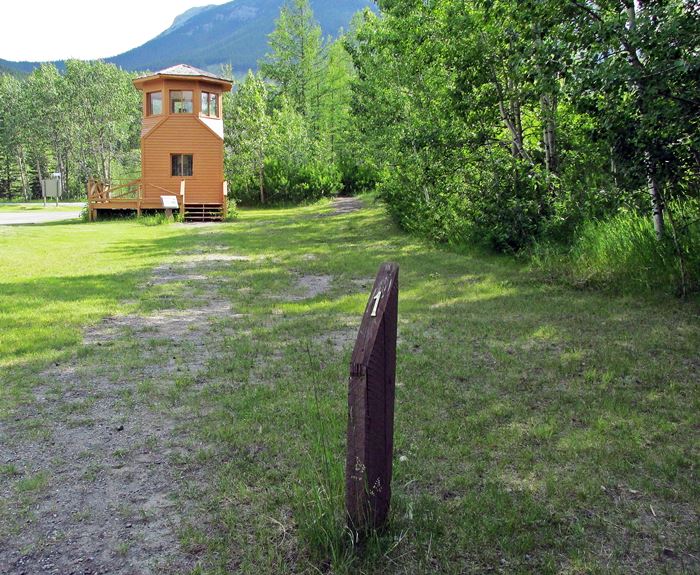 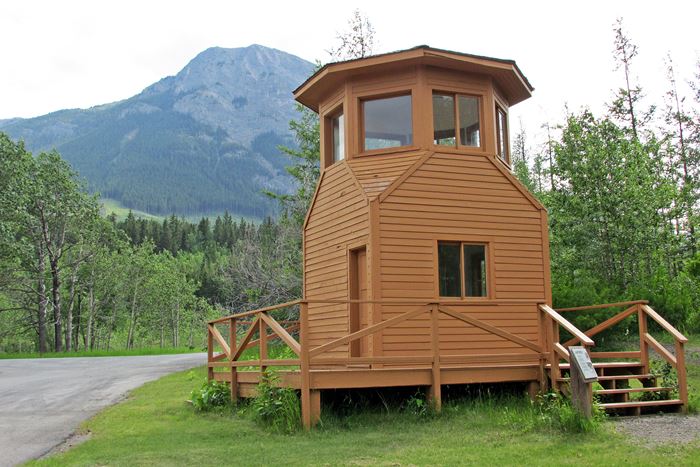 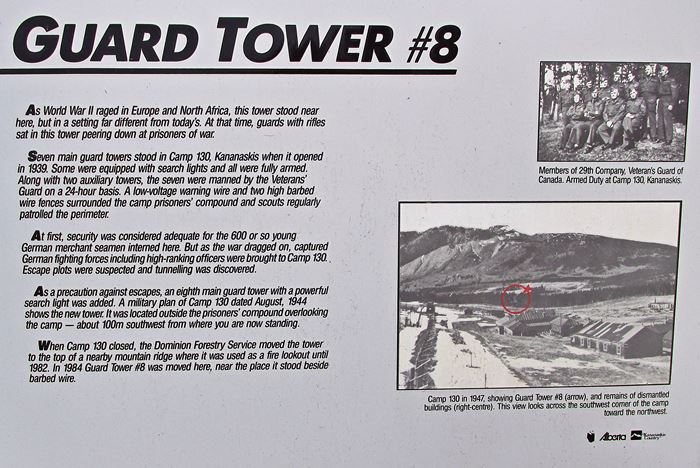 Guard Tower # 8 has been improved with paint removal and a fresh coat of stain.  A clear path on the west side of  the tower leads past Exhibit Post # 3 to cross the entrance road towards a hiking sign in the meadow on the far side.

Exhibit post # 4 guards the concrete floor of the camp's laundry house.  The area is roped off to reduce wear and vandalism but the concrete slab, with two rusty, sealed pipes, is being rapidly reclaimed by forest. 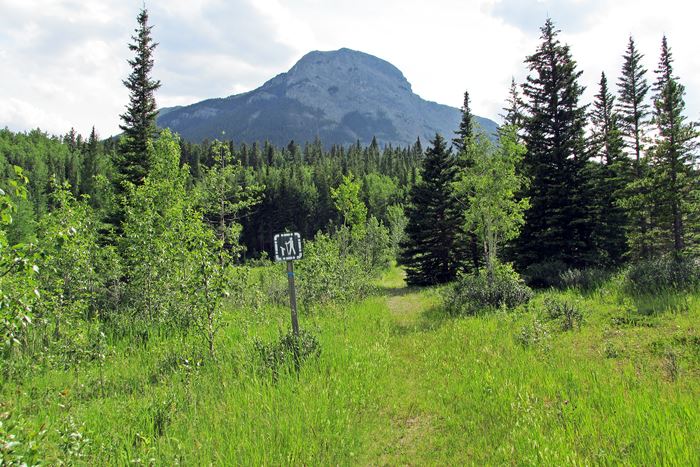 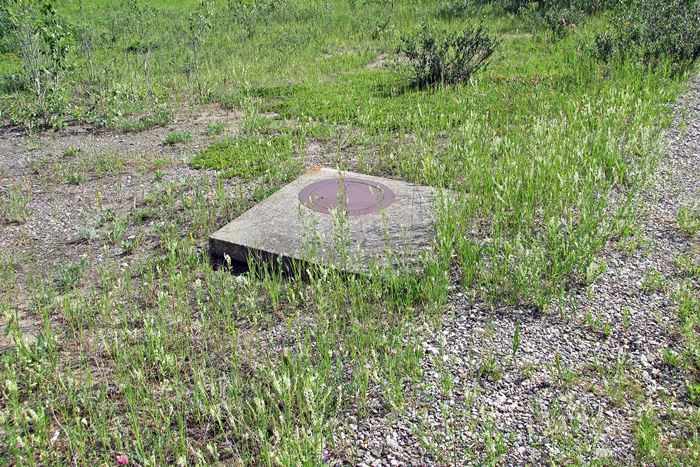 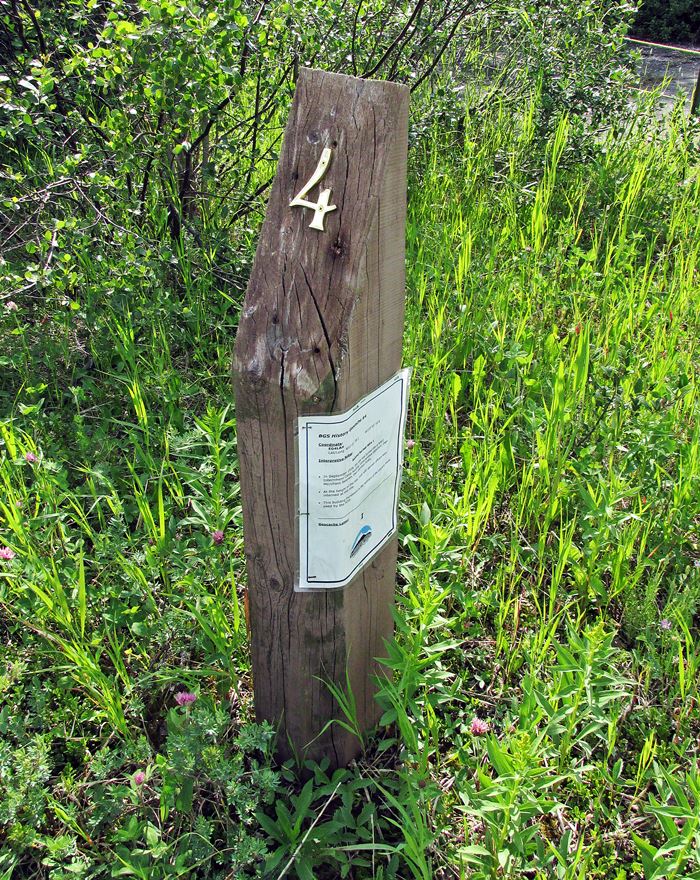 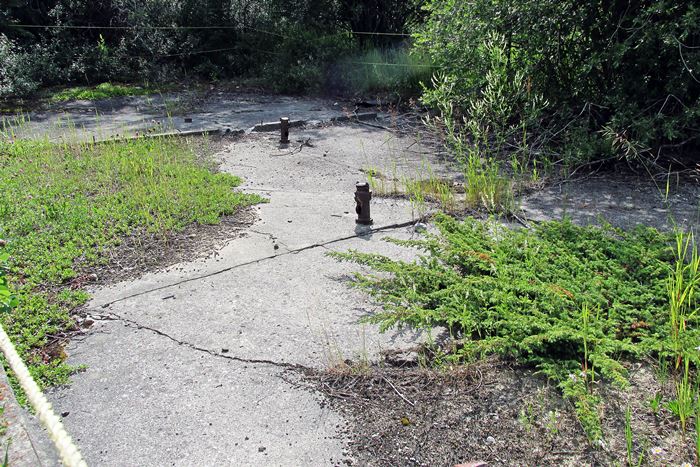 On the other side of the path, a grassy meadow with a sandy area contains bits and pieces of old artifact and a single, small tent.  There are no interpretive plaques to assist.

The only evidence of recent activity is instruction sheets attached to the occasional number post from a past geocaching exercise.  The overgrown interpretive path continues straight towards Mount Baldy before a right turn leads down a gentle slope on the 'P-shaped' History Loop to Post # 5 of 8 interpretive stations.  There is an unexplained depression in the ground near Post # 5.

At unexplained Post # 6,  there are vague remains of concrete foundations off to the right which have been nearly completely reclaimed by the forest.  An orange, mostly-collapsed, plastic security fence pretends to protect the area.

It is a beautiful forest walk. 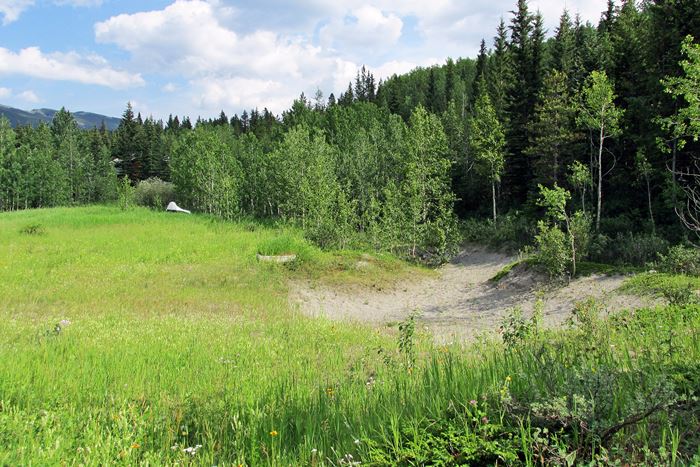 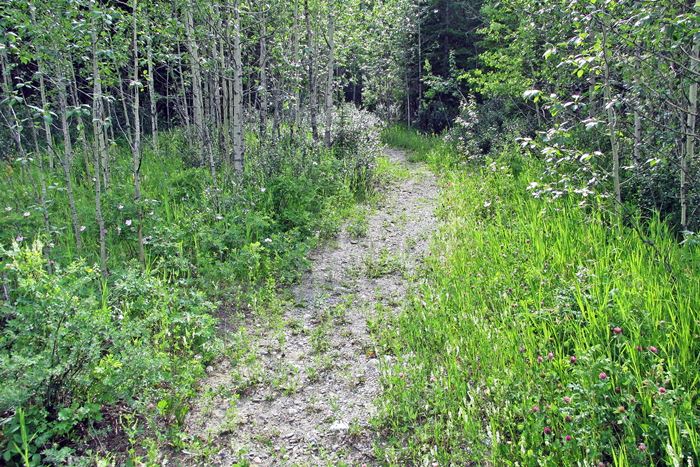 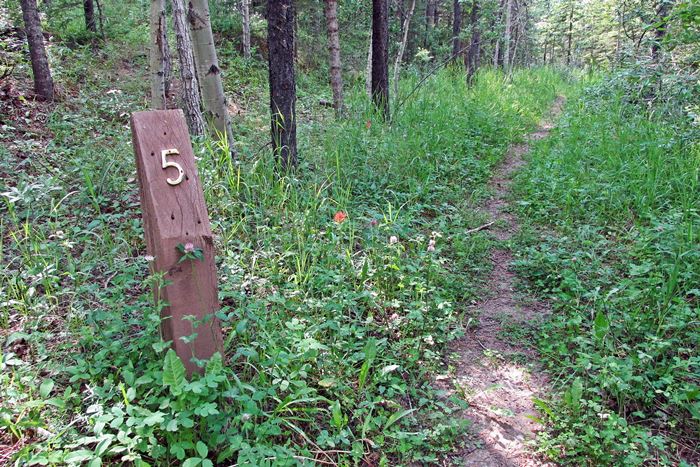 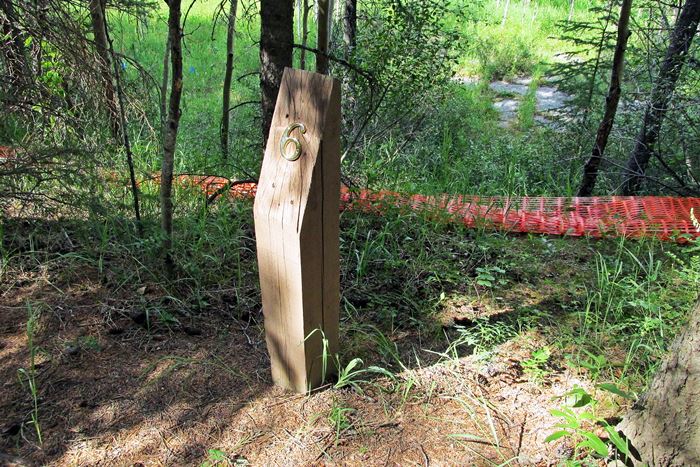 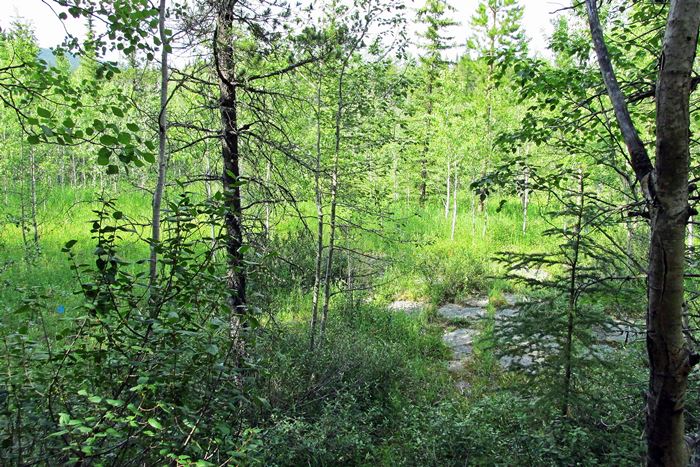 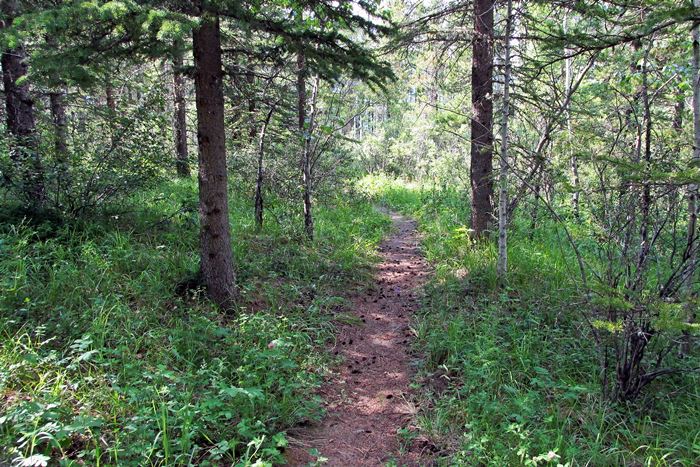 Further along the interpretive trail, Post # 7 is near Kananaskis Trail (Hwy 40).  The aquamarine water at the north end of Barrier Lake Reservoir is visible through the trees.  A stretch of open gravel ground past Post # 7 may have hosted camp structure but there is no information for visitors.

Post # 8 at the location of a beautiful meadow similarly reveals no information about the past.

Wildflowers are prolific and brilliant orange wood lilies are blooming bright in the sunlight.  The right turn leads back past the laundry house foundation at Exhibit # 3 before reuniting with the main trail for return on trail beginning at Colonel's Cabin. 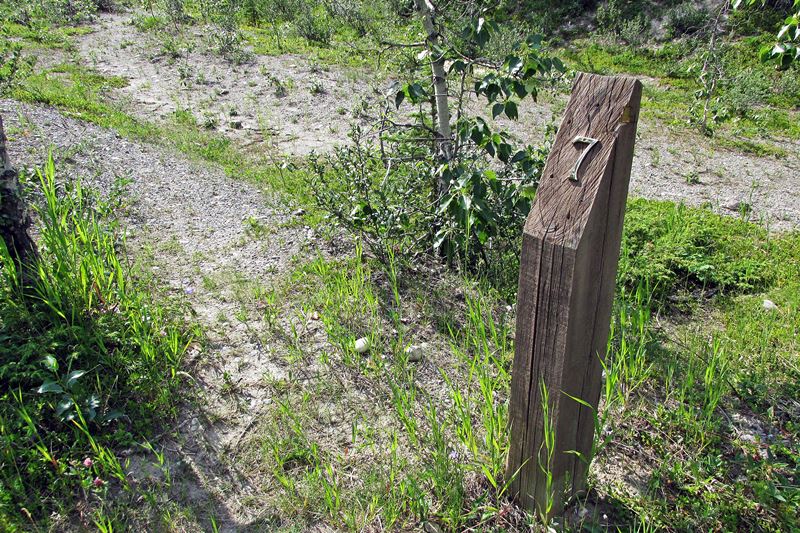 The best historical reference and summary is in a book titled, 'My Valley - the Kananaskis' by Ruth Oltmann.  Chapter 4 provides fascinating narrative and excellent photographs of Camp # 130 when it was operational.

Other websites acknowledge the existence of the History Loop.  A notice on the door of the Colonel's Cabin provides the phone numbers of Alberta Sustainable Resources. 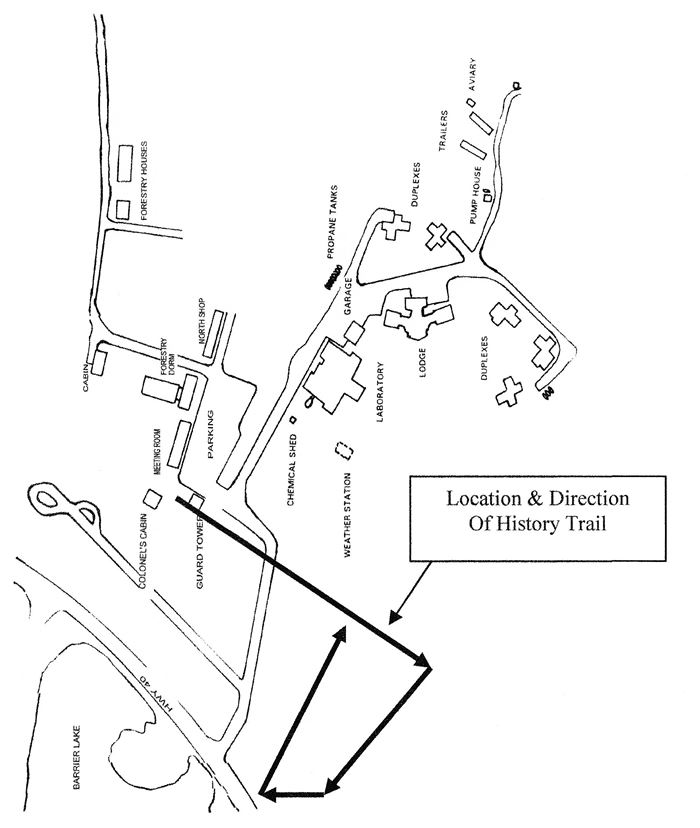 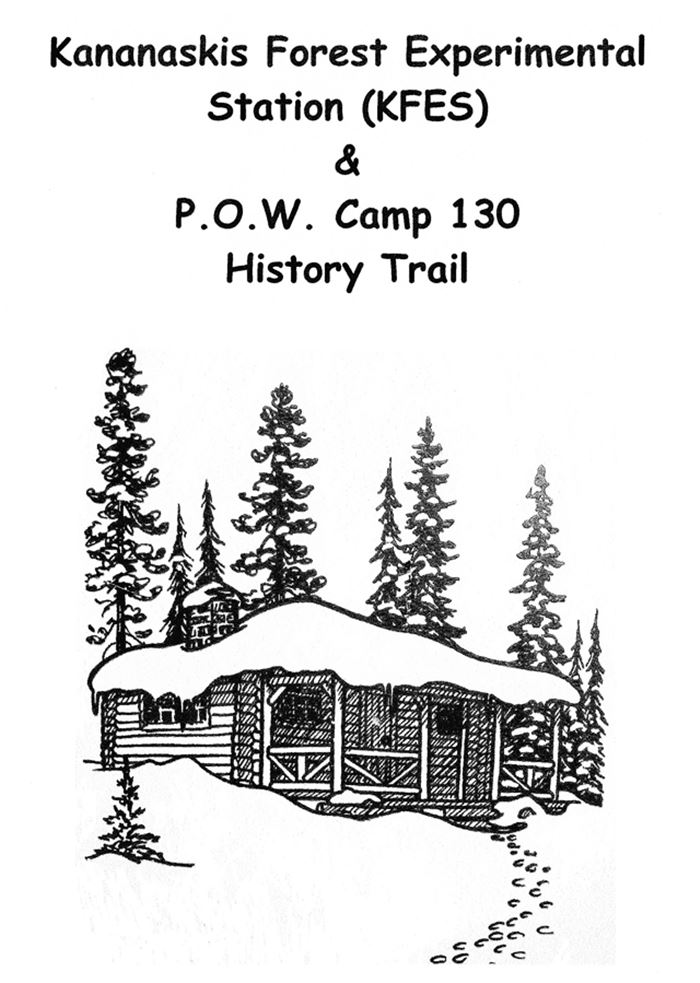 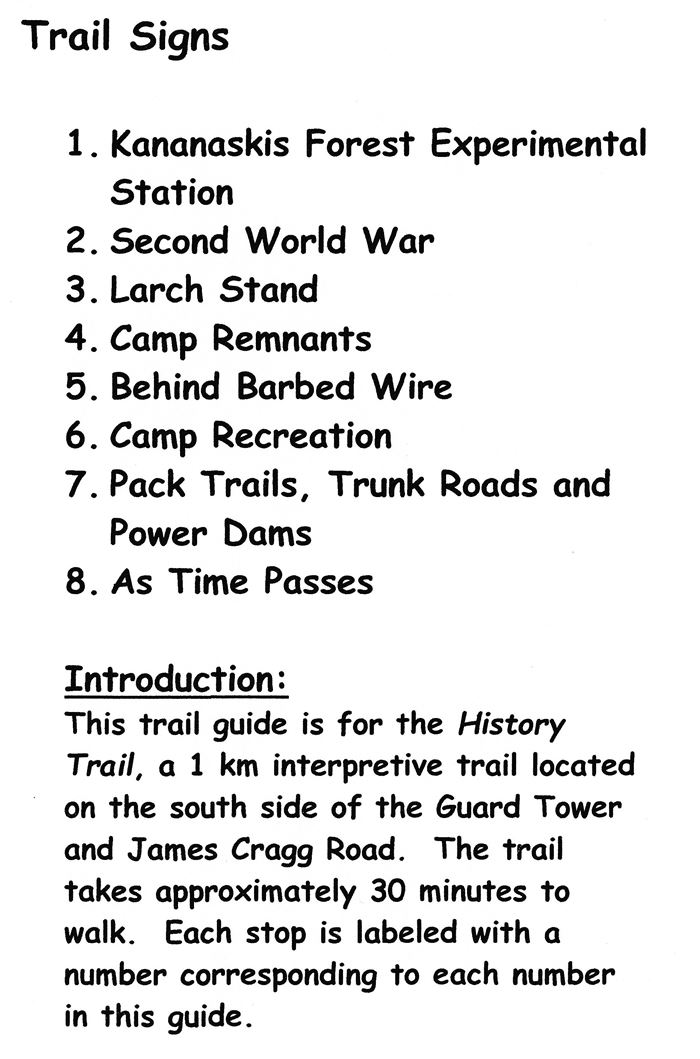 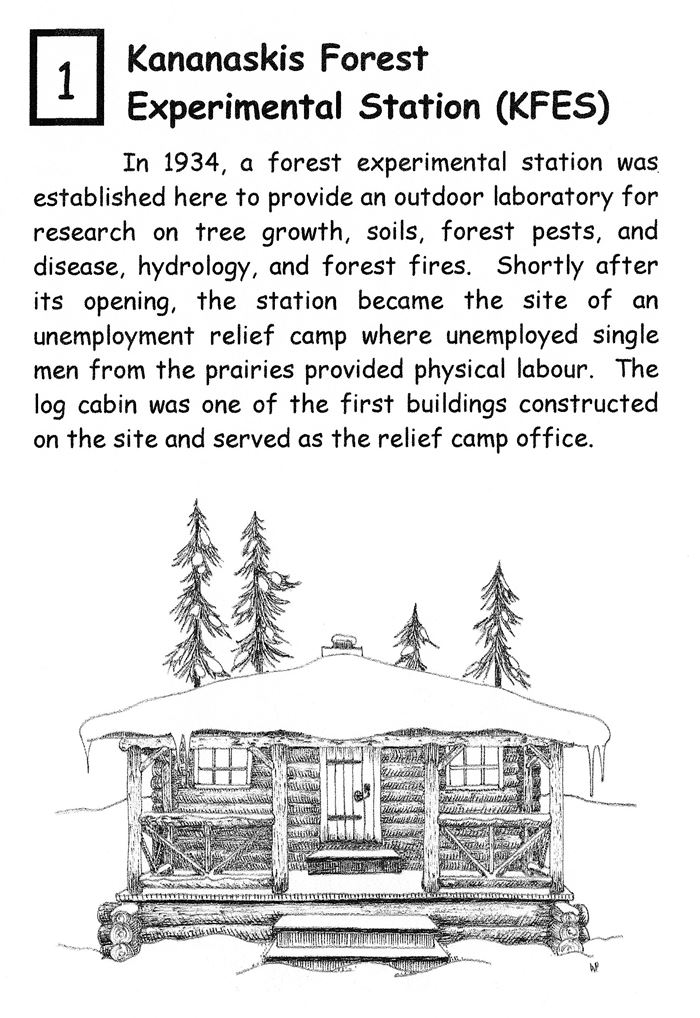 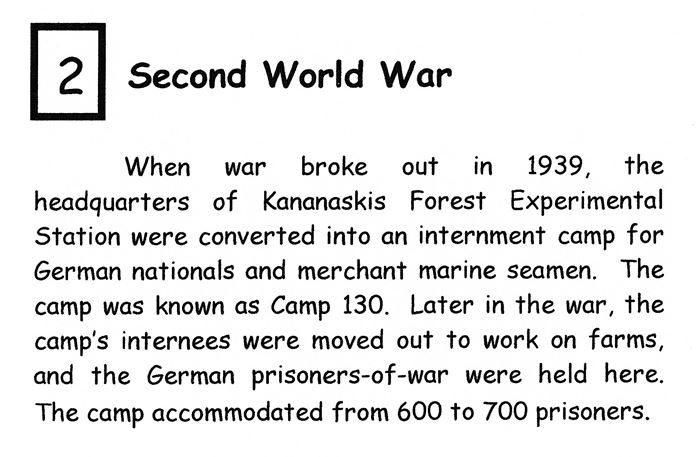 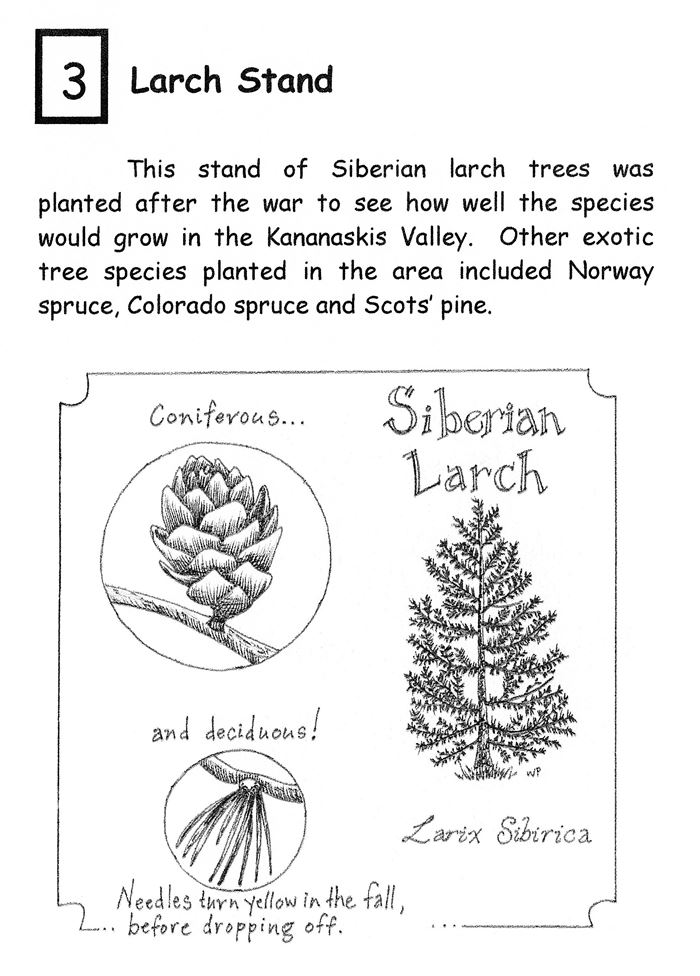 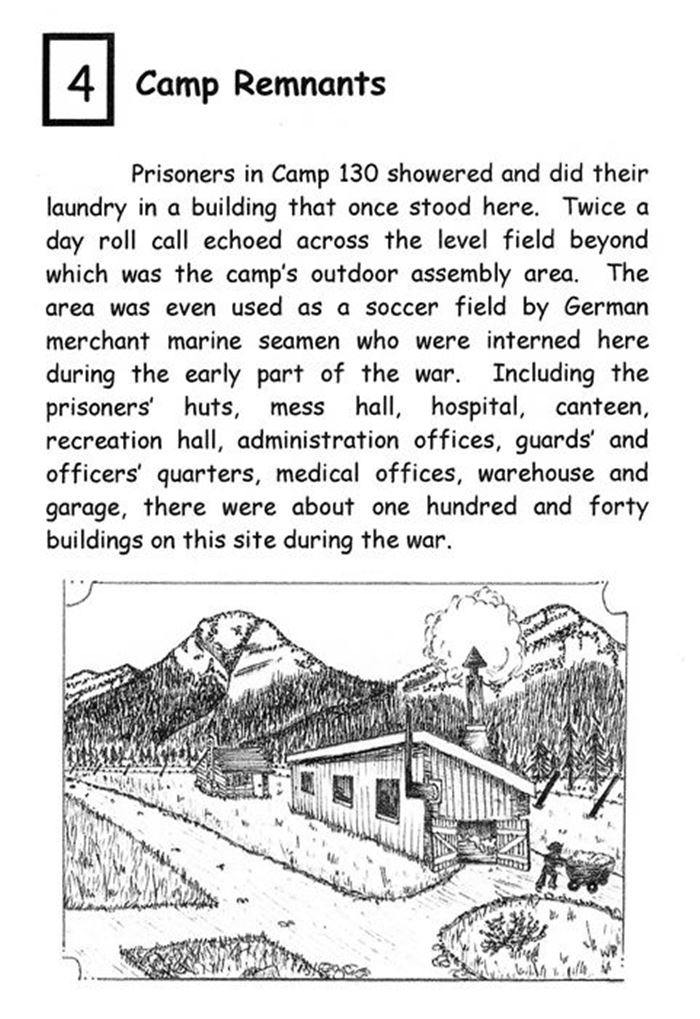 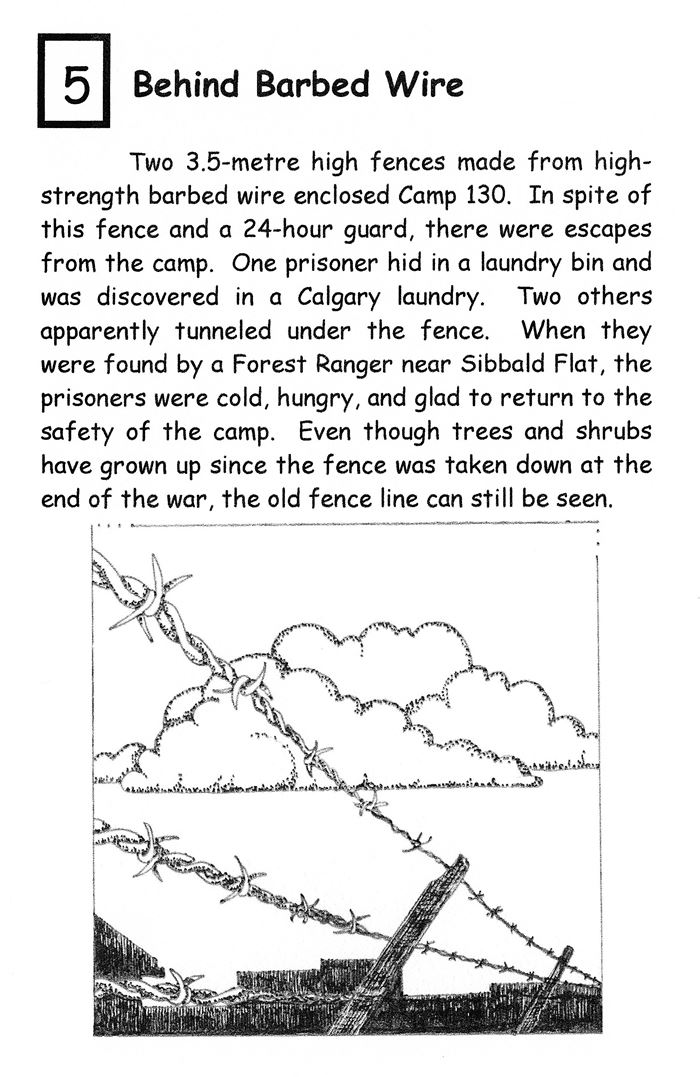 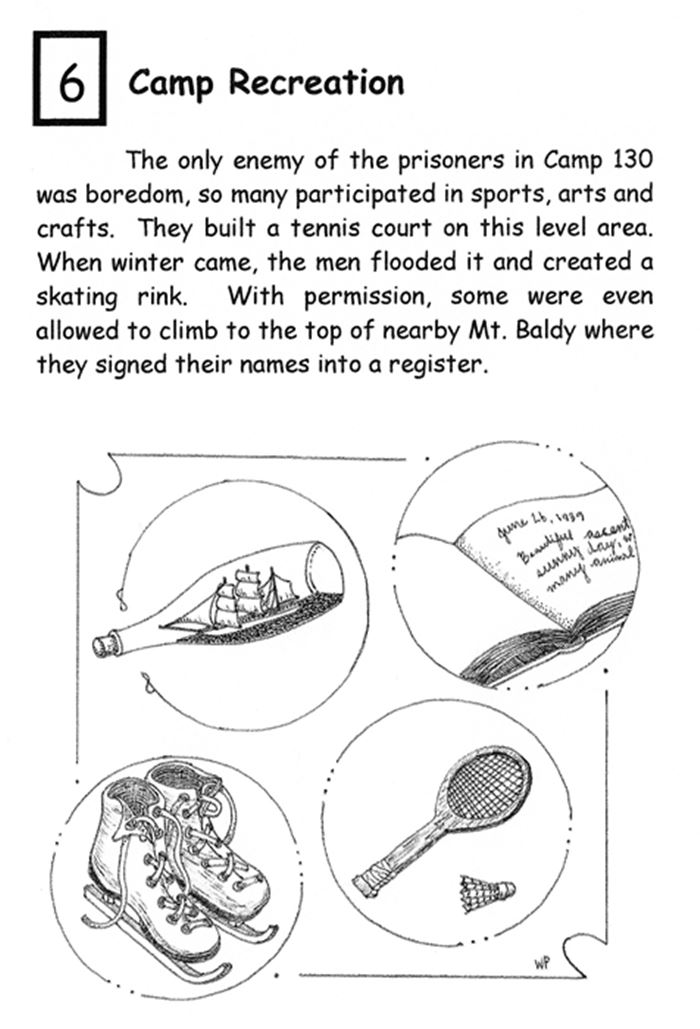 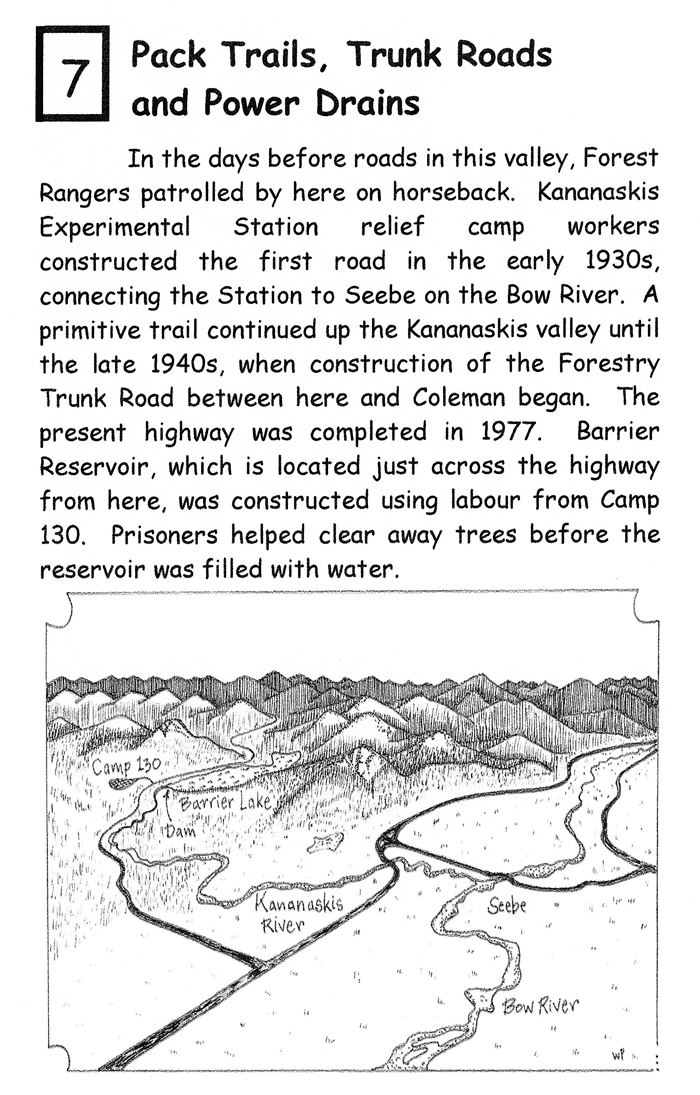 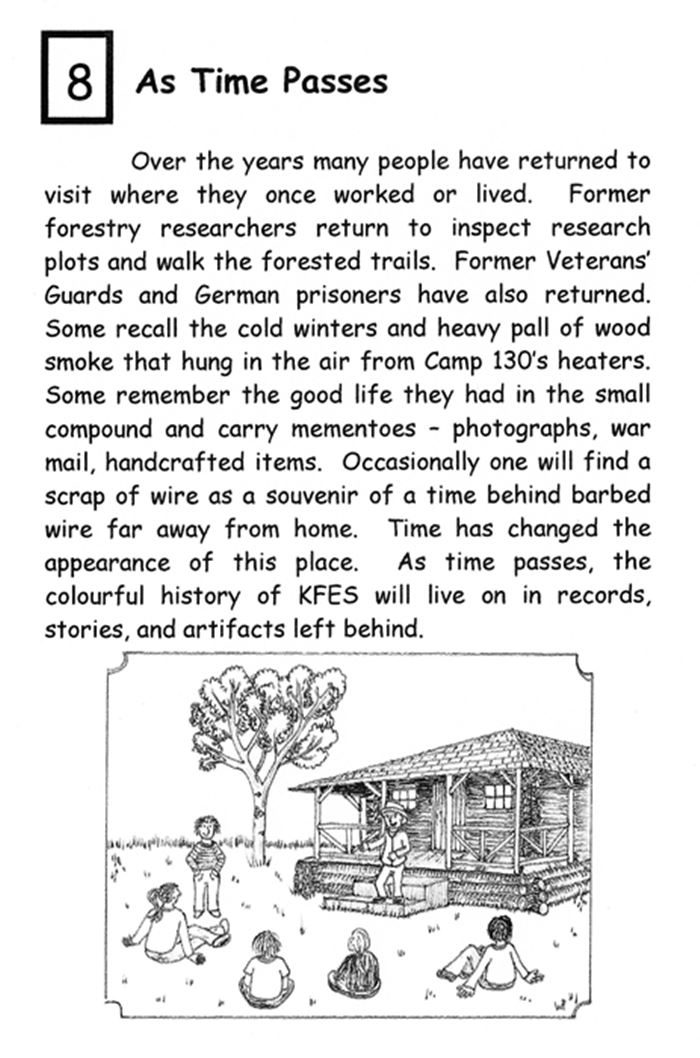 It appears the Colonel's Cabin and Guard Tower # 8 may be maintained in recognition of the historic events of the time.

A great interpretive display, using a layout map and a collection of old, wartime photographs, could be created at the site of Colonel's Cabin and the Guard Tower as an alternative to the History Loop as it stands today.  It would also improve the picnic area and the trail-head for the Forestry Loop.

Photographs for this post of the History Loop at Colonel's Cabin near Barrier Lake were taken in Kananaskis Country west of Calgary, Alberta, Canada on July 6, 2015.