Jura Creek Canyon is an excellent hike with dramatic features between Exshaw Mountain/Ridge and the Door Jamb Mountain, Loder Peak, Goat Mountain complex west of the Hwy 1A / 1X intersection and east of the Hamlet of Exshaw.

There is a sketchy pullout for the Loder Peak scramble but more convenient Jura Creek parking is at a quick right turn inside the entrance to the Graymont Exshaw Plant on the south side of Hwy 1A.

Obvious trail access is on the opposite (north) side of Hwy 1A.  Directly north is an evergreen, curvy V between two mountains.  Aim for the V.  There is a labyrinth of road and path.  Tend left (west) and hike whatever leads most consistently towards the V.

Soon, the selection of trail will lead to the post-flood reconstructed bank of Jura Creek.  Take whatever route suits you to the entrance into the canyon.  The trail above the canyon, on the left hand side is for high water conditions, when hiking through the canyon would not be possible.

The last hike through Jura Creek Canyon was in March of 2013 before the June 2013, significant flood event.  Expectations are uncertain.

Piles of jammed boulders in the short, narrow portion of Jura Creek Canyon are not a surprise and what previously was a hike through the canyon has become an easy scramble.

On this day, there is a tiny bit of water flowing in the short, very narrow section of the canyon that can be easily navigated with the occasional footstep in shallow water and a periodic leap of faith over tiny pools.

In the final photo of this following segment, a small scramble to the left is the path of least resistance in a potentially humbling maneuver over slick rock. 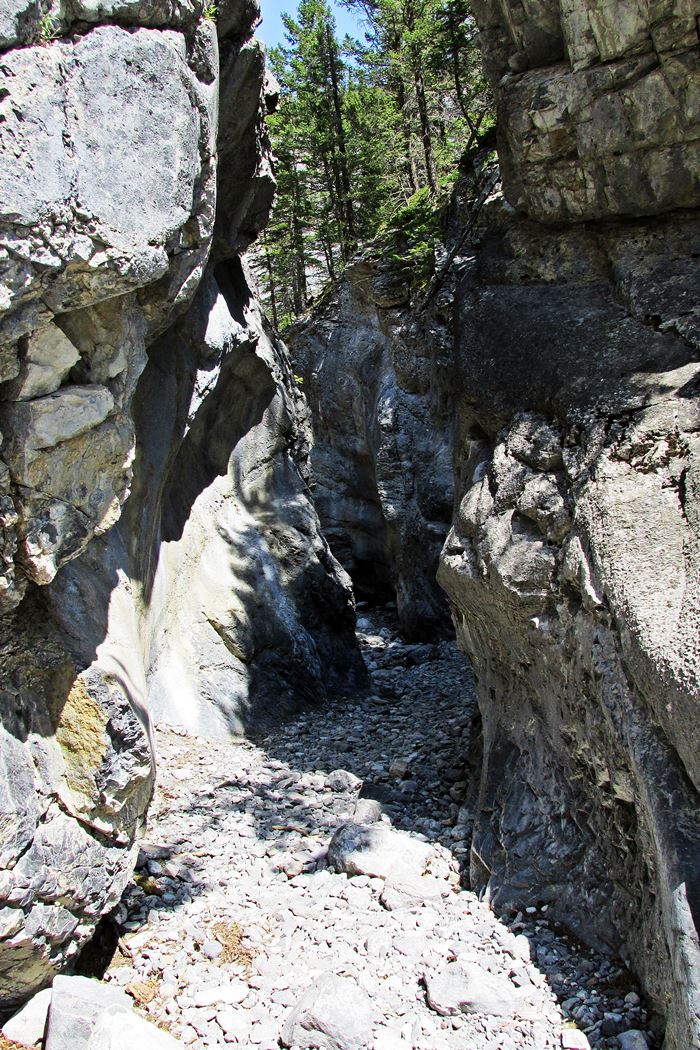 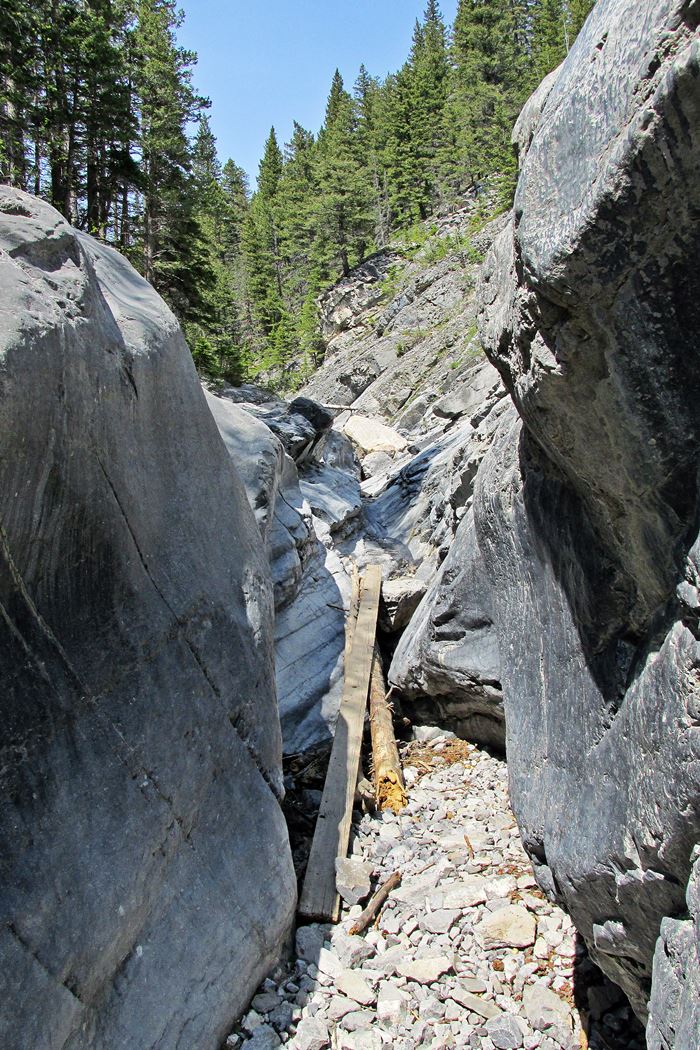 As the width of Jura Creek Canyon expands, the devastation of the June, 2013 flood is obvious.  Even today, two years later, trees along the edge are continuing to collapse into the riverbed because their root systems and the banks of creek can no longer provide adequate support.  Sections of the canyon have been swept down to bed rock.

Only a few snippets of original trail remain.  Most of it has been swept away.  Hiking straight up the creek, and around flood related obstacles, is the most efficient route.

Shoreline indicators illustrate the amount of rock which has been swept downstream.

Previously tiny draws along the side of the creek bed have been expanded significantly and the creek bed is littered with shattered trees.

Approaching the false fault is preceded by a major drainage on the left where huge quantities of soil, rock and forest have been washed away and downstream.

Immediately following is the ramp up to the false fault where sections of rock on either side appear to have entirely different composition.  It is an interesting place.

Jura Creek extends a long way past this point.  A short distance further is where the popular down scramble from Loder Peak intersects with Jura Creek for the frequently used scramble route over Doorjamb and Loder Peak.

Today, several groups are finishing the loop after the scramble over Doorjamb to Loder Peak.  A few minutes are spent at the pools which are only half full.  There is no cascading water running through them on this day.

The down scramble on the rock ledges past the false fault is achieved easily and all that remains is the hike back via the same route, in reverse, through Jura Creek Canyon.

The major draw, now to the right, has been expanded significantly.  The hike back on a gentle downhill grade is swift.  There is no need to bother with the short sections of remaining trail.

The retreat is a straight hike downstream while dodging, climbing over or detouring around major obstacles and sections of more difficult terrain.

Some sections of creek bank, and occasional portions of creek bed have been swept clean down to bedrock.  The 120 cm (47 inch) hiking pole illustrates Jura Creek Canyon width in the narrow section.

At the exit from Jura Creek Canyon, familiar mountains on the south side of the Bow Valley Corridor begin to consume the expanding field of vision.

The remainder of the hike back to the car is via the same roads and path negotiated for access.  The weather for this hike has been spectacular and it has been fascinating to observe the difference the flood made to the nature of Jura Creek Canyon.

Photographs for this hike through Jura Creek Canyon near Exshaw in the Bow Valley Corridor of Kananaskis Country west of Calgary, Alberta, Canada, were taken on May 24, 2015.