Following the humbling Tower Lake fiasco eight days prior, there is targeted determination to hike the 8.4 KM (5¼ mile one-way) hike past Tower Lake to Rockbound Lake above Castle Junction.

Both lakes are tucked behind the east end of Castle Mountain in Banff National Park, Alberta, Canada.

Early morning light creates long shadows on the Bow River and through the morning mist on Castle Mountain with Stuart Knob and Helena Ridge behind in Banff National Park, Alberta, Canada

The beginning of the hike, in new eyeglasses, from the well-marked trail-head just east of Castle Junction is identical to the Tower Lake hike so there is no point in repeating them here.

The climb, on consistently moderate grade, works lungs and legs and this day's weather is wonderful relative to the previous attempt.

The single photo on ascent is a low-angle effort of one of the plank bridges which caught the eye on approach as artistically worthwhile. 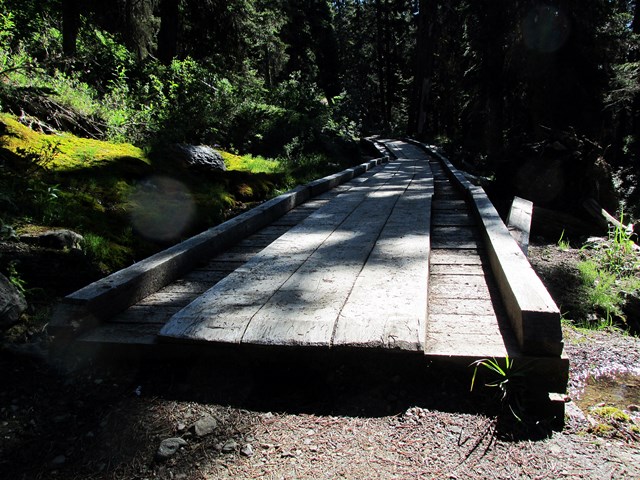 A plank bridge over a shallow, lush drainage on the hike to Rockbound Lake in Banff National Park, Alberta, Canada.

The relentless climb gives way to a series of roller coaster, shallow troughs in beautiful, lush forest before meadows open to stunning views of the sheer limestone walls of Castle Mountain to the left and Helena Ridge on the right.

At higher elevation, the trail is also offering great views of Silverton Creek.  Lower down, Silverton Falls is another short, spectacular hike from the same trail-head near Castle Junction. 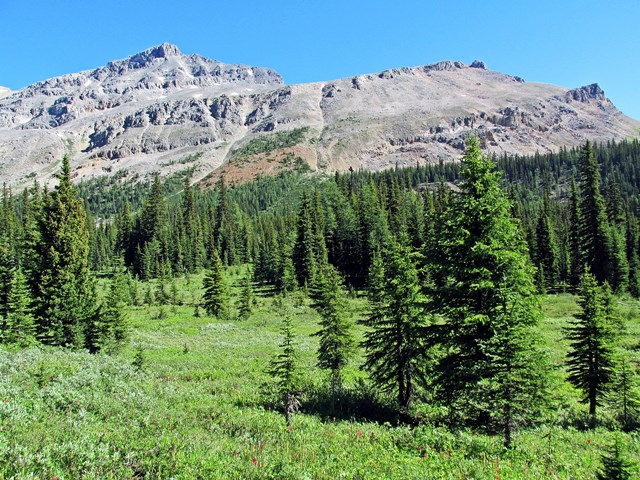 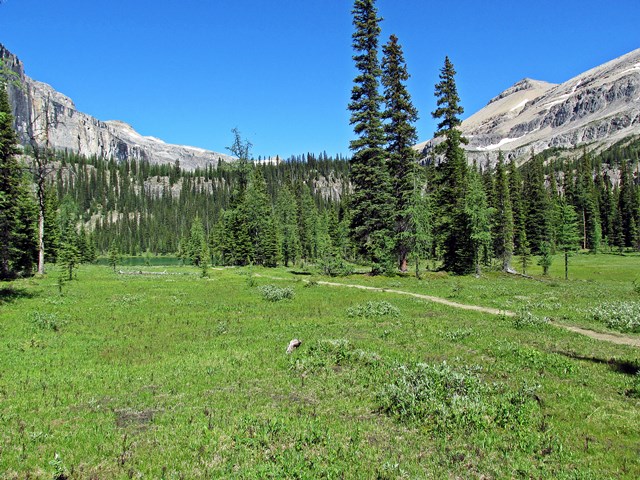 Words cannot do justice to the beauty of tiny Tower Lake beneath Castle Mountain. 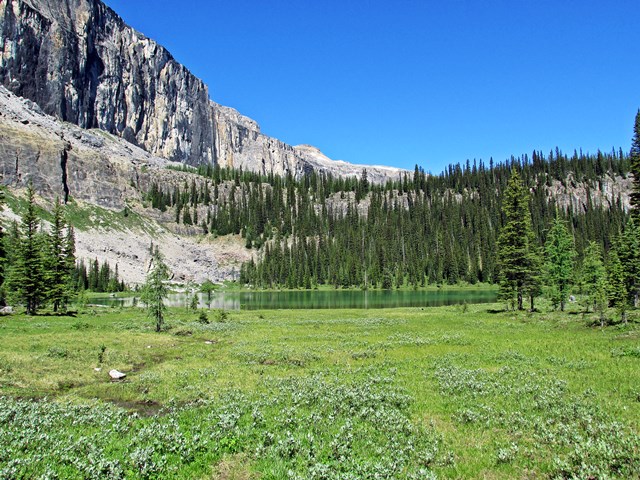 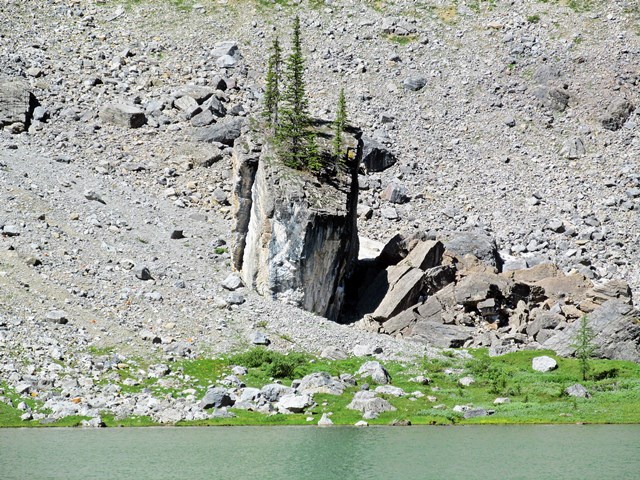 The trail continues to the north-east corner of Tower Lake, then crosses a plank bridge over a creek feeding Tower Lake.

The plank bridge over the creek at the end of Tower Lake to the continuing trail to Rockbound Lake in Banff National Park, Alberta, Canada

Even though the short extension between the two lakes is quick, it mercifully flattens through forest then explodes into open ground where the initial, amazing view of Rockbound Lake quickens the pace.  Wow!!

Still photos cannot do the experience justice.  Really, there is no alternative to getting here and experiencing the impact with a full visual field and all senses in play.  It is well worth the time but perhaps not a season opener hike for the beginning hiker.

Rock plateaus casually slope into the lake and provide a wonderful surface for the initial hike in a counter-clockwise direction around Rockbound Lake.  There are many dramatic lunch spots and an endless supply of flat rock for the creation of cairns or an Inukshuk.

At the far end of Rockbound Lake, a shallow, broad stream runs in from the right which is easily navigable towards ongoing trail leading into forest.  There no intention of continuing the entire circuit above and around the lake.  That will be left for another, longer, day. 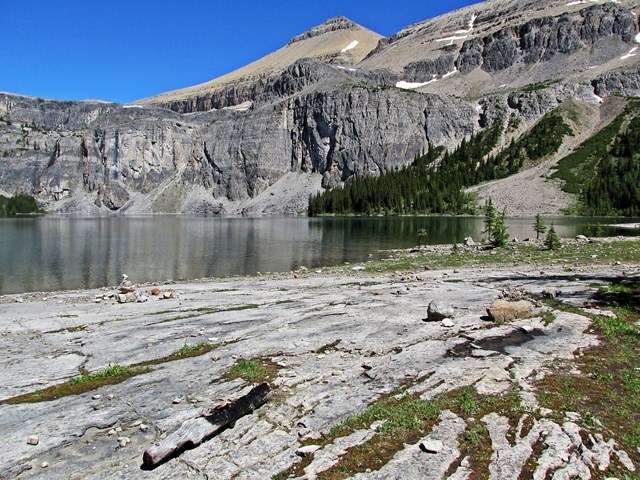 At this shallow creek and gazing over Rockbound Lake, there is a broad drainage directly behind.  Obviously, spring snow melt far exceeds the capacity of the lake.  This drainage will need to be investigated.

The draw rapidly cuts deeply.  Although the drainage appears dry, it is clear there is water running beneath the surface as a short hike proceeds along the top of the left side.

Pushing further along the edge of the drainage, views of the valley below begin to unfold until, eventually, Tower Lake appears below and the cascading white water of Silverton Creek centers the broad valley to the mountainous horizon beyond in the far distance.  Double WOW!!  What an incredible, unexpected find. 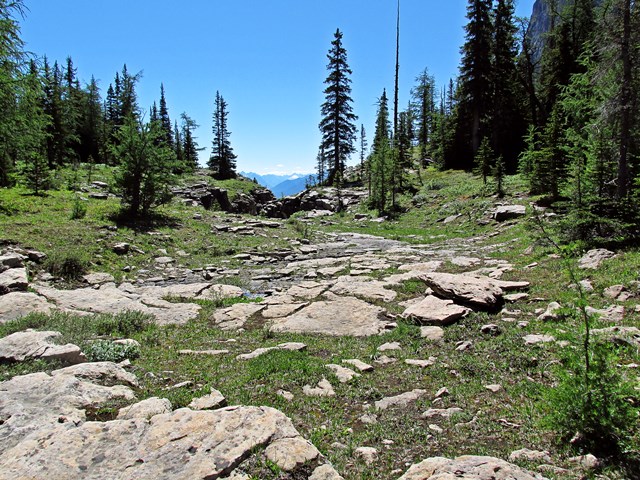 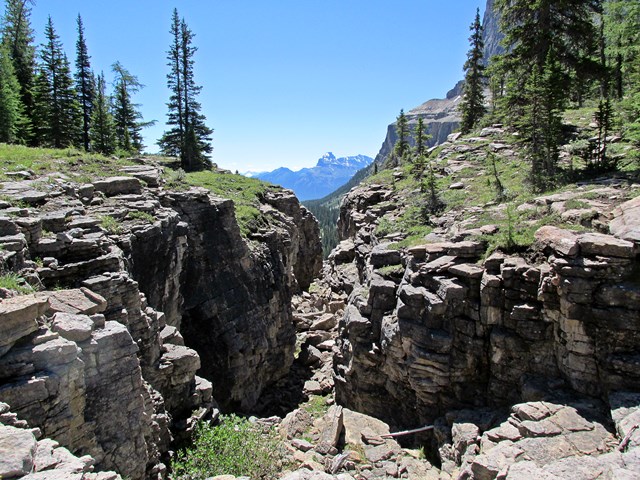 Hiking off trail along the left top side of the draw at Rockbound Lake in Banff National Park, Alberta, Canada

The full camera view of emerald Tower Lake and Castle Mountain with Silverton Creek running down the middle of Lush valley. WOW!

Tower Lake from above in Banff National Park, Alberta, Canada

The emerald water of Tower Lake from above in Banff National Park, Alberta, Canada. The creek feeding the lake and the plank bridge on the trail are visible at close examination.

On return there is time to capture a few additional images of this magical place including a visit to the rock fall area at the other end of the lake.  There is access here to climb up onto Castle Ridge but this will be left to another fine day.  The long lens of the camera clarifies the magnificent waterfall on the far shore of Rockbound Lake. 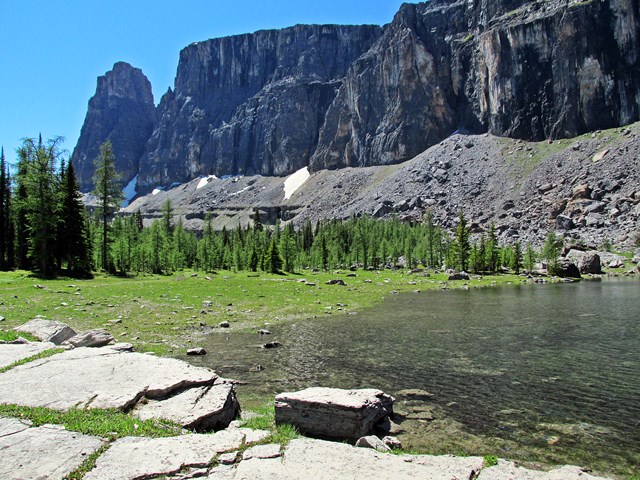 Lunch is enjoyable along the shore of Tower Lake.  Little critters, accustomed to human visitors, approach comfortably in anticipation of a potential snack. 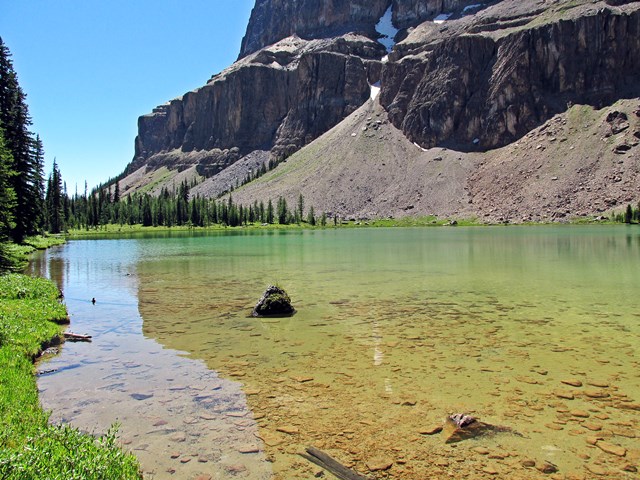 The trail back is a joy.  Attention drifts to trail-side periodically but it is accepted that eyeglasses lost in inclement weather eight days previously are gone forever. 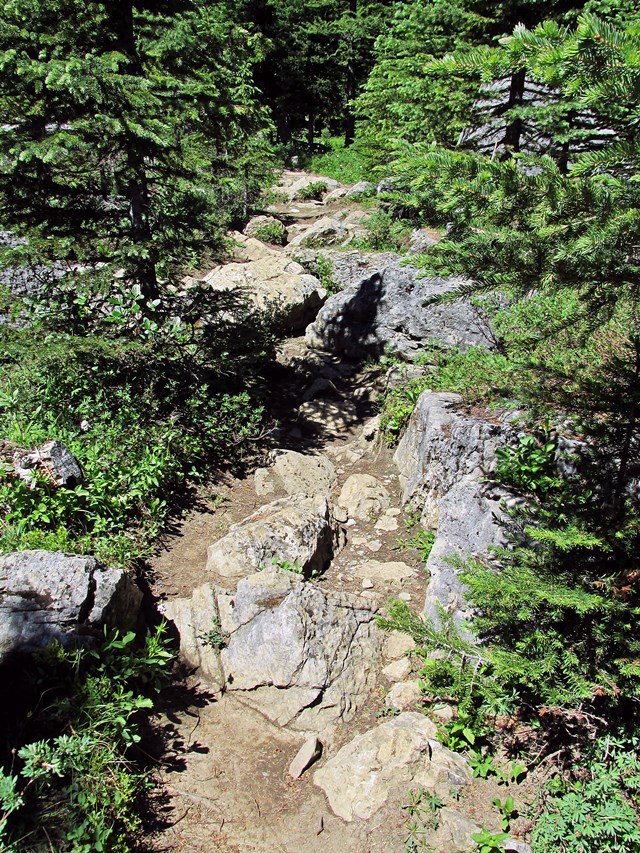 The short rock fall area of trail beneath Castle Mountain near the approach to Tower Lake on the trail to Rockbound Lake in Banff National Park, Alberta, Canada

Near the end of the hike, I check the trail head kiosk at the parking area.  I always do this at the beginning of a hike.  To the best of my knowledge, today is the first time I have ever checked the kiosk at the end of a hike and I am not aware of any reason I would do this today.

Well, I'll be damned.  Out of the corner of my eye, I see my lost eyeglasses hanging from one of the roof struts.  God bless wilderness people.  Someone has found them somewhere along the trail and placed them there in spite of the unlikely odds anyone would ever return to find them.

They are not broken at all, just very dirty, and completely recoverable.  Talk about making someone's day.  An incredible hiking experience topped off by the reclamation of an expensive pair of eyeglasses.

To whoever you are, Thank You. 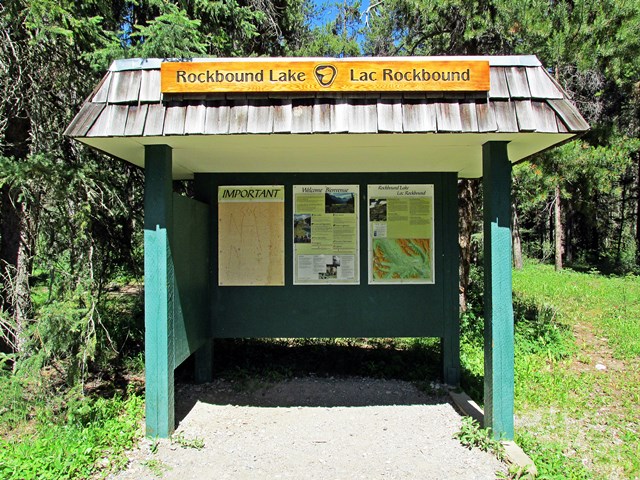 What a magnificent day.  There is time for a brief stop at the popular Vermilion Lakes Lookout along the TransCanada Highway for a spectacular, sunny-day, classic view of Mount Rundle towering over somewhat uniquely colored hues in Vermilion Lakes.

Every once in a while, there is a perfect day like this one which reaffirms enduring faith in the magic of the wilderness.