Drumheller hoodoos pose in the badlands near Drumheller, Alberta, Canada.

From Drumheller, scenic Hwy 10 tracks the Red Deer River southeast through spectacular badlands terrain, past Rosedale, and the intersection for the old Star Mine and the historic coal mining hamlet of Wayne, to the Drumheller Hoodoos on the north side of the highway.

These are some of the finest hoodoos in the Canadian Badlands and recent improvements include new metal stairs and viewing platforms to enhance the experience.

The viewing ramps will also help to preserve this precious natural resource for future generations.

Note:  The stairs and platforms are constructed using perforated metal with raised sharp edges that improve traction but the rough surface could be dangerous to fall onto, so due care, and assistance for children is important. 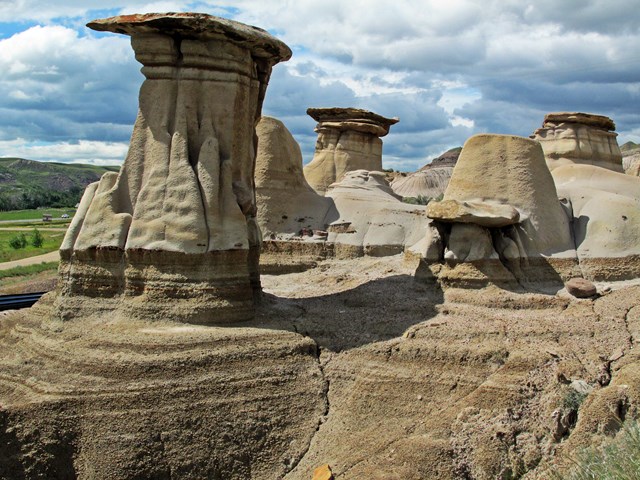 Drumheller Hoodoos on Hwy 10 in the East Coulee near Drumheller, Alberta, Canada

Surrounding the main viewing areas, trails branch out to other fascinating parts of this natural attraction.

The rest of the family choose to scramble up to flat grass fields on rolling land above the exposed hoodoos.  While they are working on their objective, mine will involve wandering to lesser populated areas for discovery and appreciation of overwhelmingly beautiful terrain.  This is an excellent place for artistic photography.

Hoodoos under construction with typical badlands terrain in the background east of Drumheller, Alberta, Canada.

Hoodoos under construction in East Coulee near Drumheller, Alberta, Canada

Badlands in the East Coulee near Drumheller, Alberta, Canada.

Daughter and her children are gaining good elevation as they work their way up the slippery slopes while my missions traverses the more level, stable ground beneath spectacular multi-layered mounds typical of badlands terrain.

As years of rain erode the soft colorful layers of varying density rock, channels form and create mosaics of color, reflection and shadow accentuated by the low growth of hardy plants.

Climbing on the rugged terrain at Drumheller Hoodoos.

At the top of the badlands terrain there are uninspiring grassy fields on rolling land.

Many large, richly colored specimens of protected, petrified wood litter the ground.  They must be left in place for others to enjoy.

Further south, an area of rock deposit captures the imagination where very light-colored formations are mildly punctuated by bands of darker and more dense rock.

Over hundreds of years, more hoodoos will be formed here as rain washes away the soil and large, currently buried, flat rocks protect the soft rock beneath them to eventually form a columnar hoodoo.  In sunlight, some of the white and smoother surfaces take on the appearance of polished marble.

Hiking back toward the main viewing area, the others are making their descent and the camera's long lens discovers they are enjoying the challenge in good spirits.

Throughout the main area there are many interpretive plaques which identify features and plants unique to the badlands.  There is an opportunity to learn about this unique area which separates prairies to the east and magnificent mountains to the west.

This region is infamous as a historic coal mining area.  Although much of the coal mining evidence has been dismantled over the past several decades, there remains lingering evidence.

One of the best preserved locations is the Atlas Coal Mine, a designated National Historic Site just down the road from the hoodoos and the next planned destination.  There is far more to see and do than can be done or seen in a single day.