Everyone has days when they need some help. 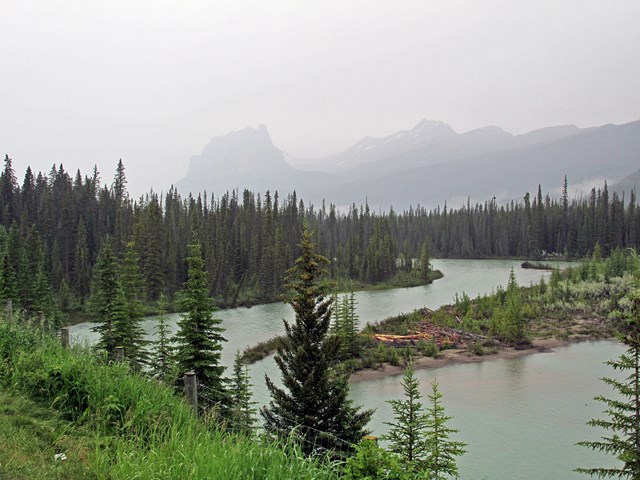 Castle Mountain in the mist past the Bow River from the TransCanada Highway in Banff National Park, Alberta, Canada

The forecast calls for wet weather at Castle Mountain.

The turn right off the TransCanada Highway onto Highway 93 leads to a short drive over the Bow River to Castle Junction.  The barricades on the Bow Valley Parkway (Hwy 1A) have been removed from the previous week's hike to Castle Mountain Fire Lookout, so the start of the hike is delayed for a investigative drive past the west end of Castle Mountain, and the closed trail to Protection Mountain, for investigation of the flood aftermath at Baker Creek, with the hope the weather may improve.  The weather deteriorates further.

Signage at the trailhead is intact at Baker Creek in Banff National Park, Alberta, Canada.

Rock and lumber debris litter trail access and the bridge has been swept downstream at Baker Creek in Banff National Park, Alberta, Canada.

Rockbound Lake is tucked in behind the north side of Castle Mountain in a spectacular bowl created by Eisenhower Peak, Stuart Knob and Helena Ridge.  Easy-to-access trail-head parking is located 0.2 KM (⅛ miles) east of Castle Junction.

The parking area is also the trail-head for the short hike to Silverton Falls.   The well-groomed trail is obvious directly behind the kiosk and initial trail surface is flat on crushed stone through forest, aroma-enhanced by the mist and light rain.

Initially the trail is well-groomed and flat.

Elevation gain begins shortly after passing the trail junction about a third of a kilometer from the trail-head.

On this day, it is uncharacteristically waterlogged and off trail diversions around puddles are periodically necessary.  Highlights are few with occasional plank bridges assisted by stepping-stones over shallow draws.

Near the 5 KM (3¼ mile) mark the wide trail narrows and turns northwest sweeping around the base of Eisenhower Peak onto rolling terrain which negotiates some swampy sections.

At the trail junction Silverton Falls is on the right and Rockbound Lake continues straight on the left branch. 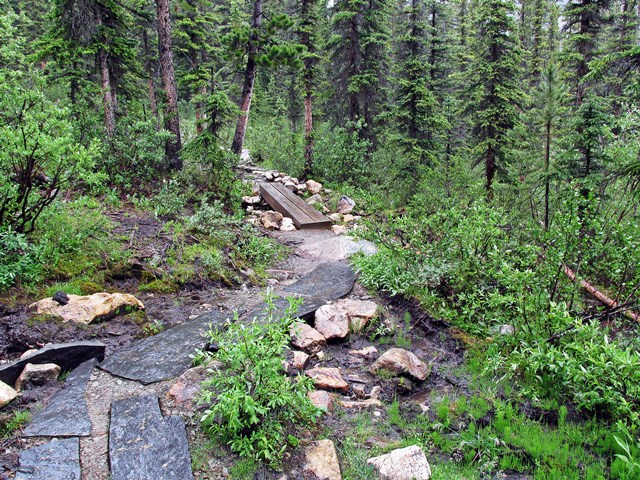 There are swampy sections through dense evergreen forest at higher altitude. 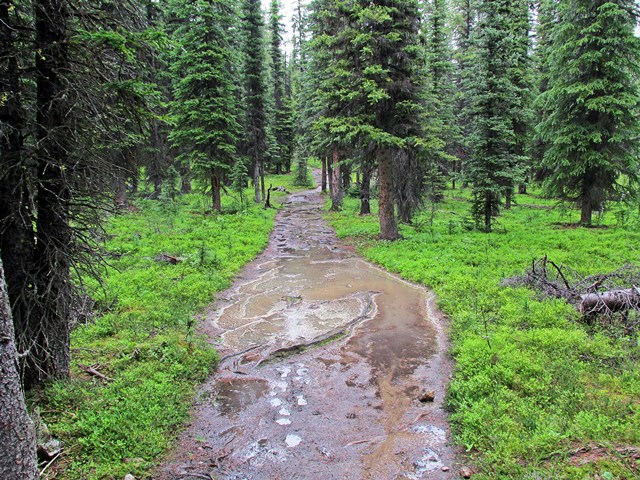 Following a foray through an old and large rock fall, the evergreen forest gives way to a small alpine meadow beneath Castle Mountain.

Towering walls to the left are awe-inspiring.  Gear alterations, heavy mist and rain throughout the hike have made photography challenging.

At the far end of the meadow, Stuart Knob appears above Castle Mountain Ridge and in the fog the first glimpse of Tower Lake is easy to miss.

Rich colors of emerald and green merge into a consolidated mosaic.

Approaching the sweep around the base of Eisenhower Peak at the east end of Castle Mountain in Banff National Park, Alberta, Canada 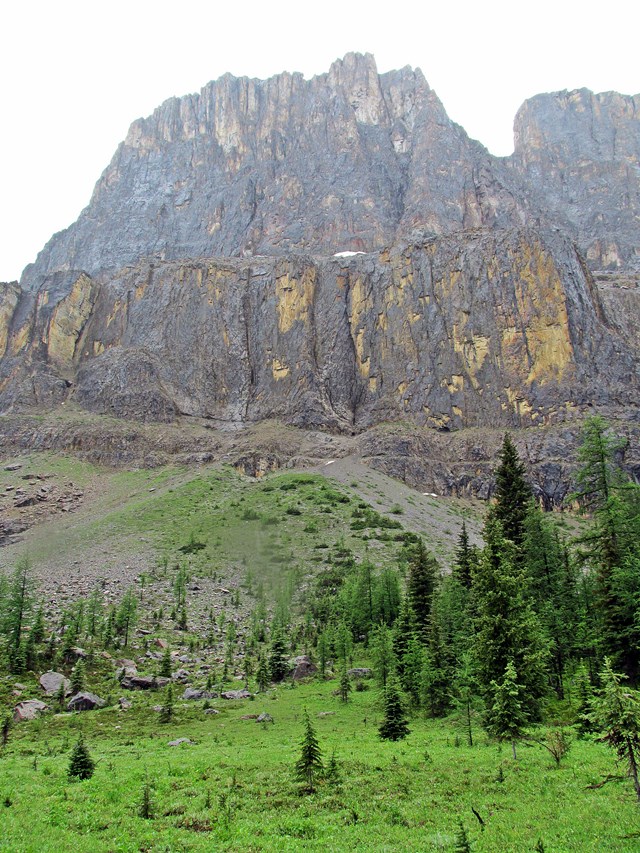 Hiking the short distance further brings the turquoise gem which is Tower Lake, clearly into view.  The tiny lake is breathtakingly beautiful and quickens the pace to arrive at shoreline.  Submerged paths require careful foot placement to protect delicate plants and gain access to the lake shore for several minutes of photography.

After satisfying a portion of the infinite photographic opportunities, shelter is taken under the sweeping branches of an evergreen giant to modify gear for the final, short climb on switchbacks to Rockbound Lake.

Expensive, prescription glasses are missing.  Obviously, somewhere along the 7.7 KM (4¾ miles) journey between the trail-head at Bow Valley Parkway and Tower Lake, the glasses have come off during layer adjustment or rain gear and polarized, UV protection eye wear being taken on and off to work with the camera.  Somewhere, the prescription glasses have disappeared and gone unnoticed in the mist and rain.

Just 0.7 KM from the objective, the decision is made to turn back in the hope they may be discovered somewhere along the trail.  Since tiny Tower Lake has become the new objective for the day, more photos are taken of this incredibly beautiful place before beginning the return hike.

Eisenhower Peak on Castle Mountain above the meadow as viewed from the edge of Tower Lake.

Eisenhower Peak above the meadow. 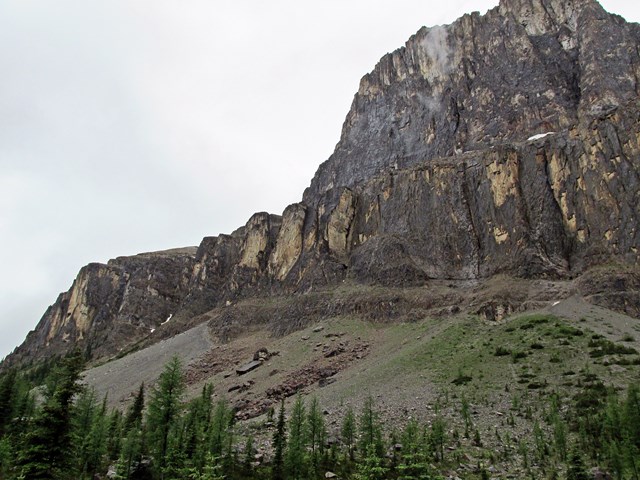 Hiking while trying to remember where photos were taken, or gear was changed, and scouring the trail with little expectation the glasses will be found is not particularly enjoyable on the hike back to the trail-head. 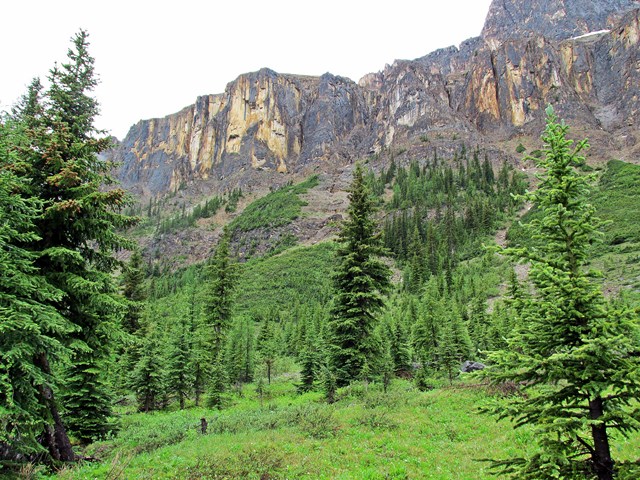 Castle Mountain from the meadow on the return hike from Tower Lake in Banff National Park, Alberta, Canada.

On return to the car it is accepted the glasses are gone.  Careful examination along the length of the trail and the parking area reveals nothing.  The drive home to Calgary proceeds with the realization a spare pair of glasses, kept in the car, would be a good idea.

For many years it has been standard practice to tether sunglasses over prescription lenses to keep them on at higher altitudes when winds can be strong and gusty.  It is often necessary to remove the fit-over polarized sunglasses to view the LED screen on the camera.

Note to self.  Tether both pairs of glasses to prevent the polarized, UV filtering lenses from dislodging the prescription lenses when removed.  It seems fairly certain this is what happened.

Images for this day hike to Tower Lake were captured on a July 8, 2013 rainy day.