The panoramic east end of Lake Louise away from the historical and world-famous Fairmont Chateau Lake Louise is more than ethereal.  The view of the mountain-surrounded lake is an international icon and the awe-inspiring visual is overwhelming under sun on this clear, blue-sky day.

Fairview Mountain, at 2,744 m (9,002 ft), dominates the skyline on the south shore of Lake Louise.  The location of Fairview Lookout, on the north flank of the mountain defies detection. 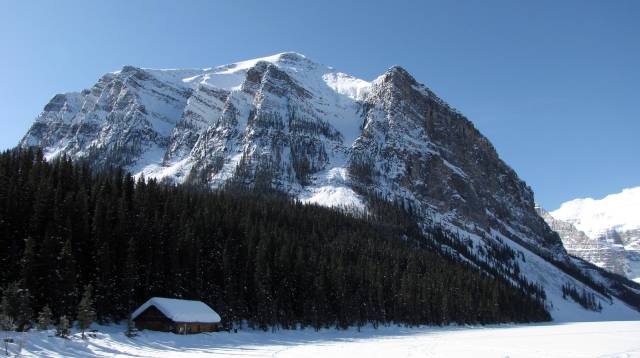 The Plain of Six Glaciers consumes the west end of Lake Louise.

On this clear, crisp, winter day, there is an overwhelming and natural compulsion to stand and absorb the magnificent spectacle which assaults the senses and captivates the imagination.

The long lens of the camera allows closer examination of the details in the turquoise ice in the hanging glaciers. 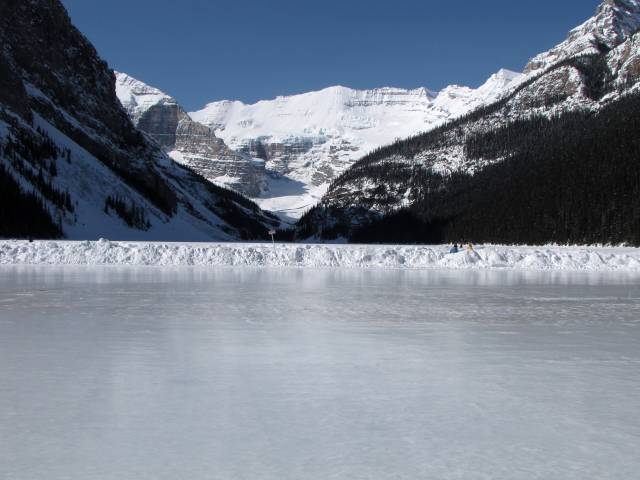 The Plain of Six Glaciers past the west end of Lake Louise in Banff National Park, Alberta, Canada 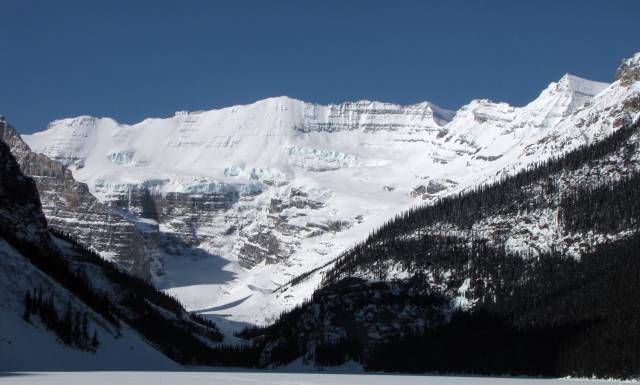 A long lens view of the Plain of Six Glaciers past the west end of Lake Louise in Banff National Park, Alberta, Canada 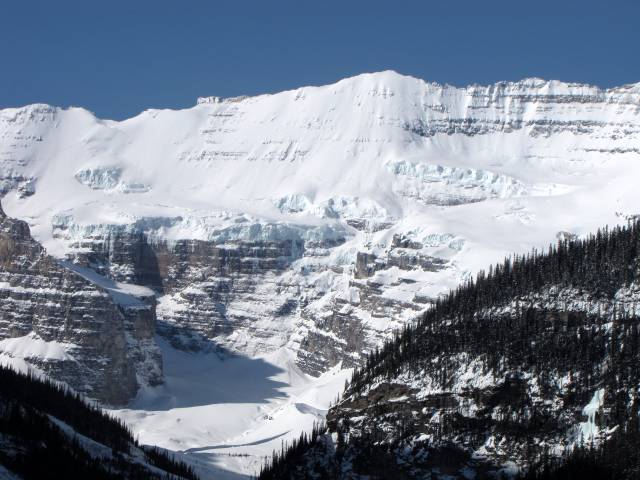 A closer look at the Plain of Six Glaciers past the west end of Lake Louise in Banff National Park, Alberta, Canada 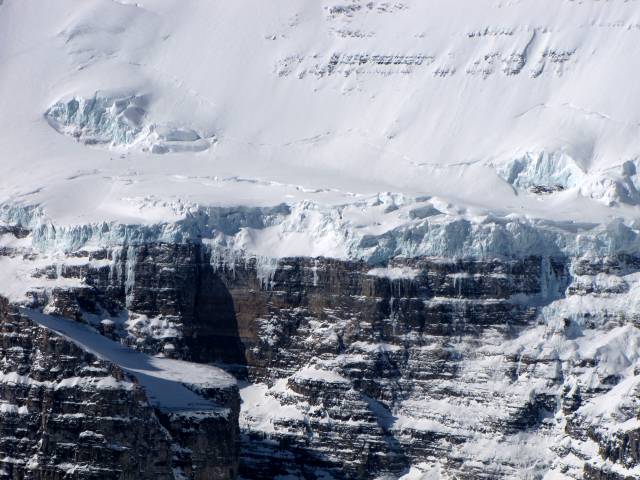 Long lens views of the Plain of Six Glacier at the end of Lake Louise in Banff National Park, Alberta, Canada 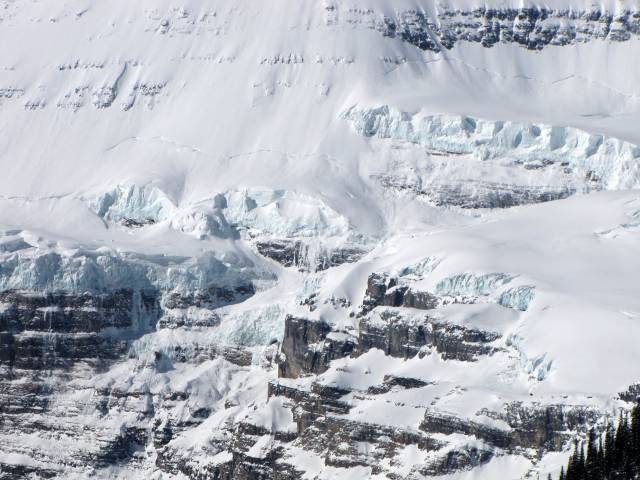 The Plain of Six Glaciers - Up close and personal

Above the north shore of Lake Louise, the Beehives frame the location of Mirror Lake and the incredibly beautiful surroundings at the Lake Agnes Teahouse.

The wide, flat Lakeshore Trail skirts the north shore of Lake Louise for 2 KM (1¼ miles).  Horse-drawn sled tours transport blanket-laden passengers along the trail at periodic intervals for those unable or insufficiently equipped to hike the distance.

Progress along the length of the Lakeshore Trail, gradually truncates to exclude all but the glaciers on 3,423 m (11,230 ft) Mount Lefroy.  Tucked around the corner are the remainder of the glaciers, primarily around 3,464 m (11,365 ft) Mount Victoria. 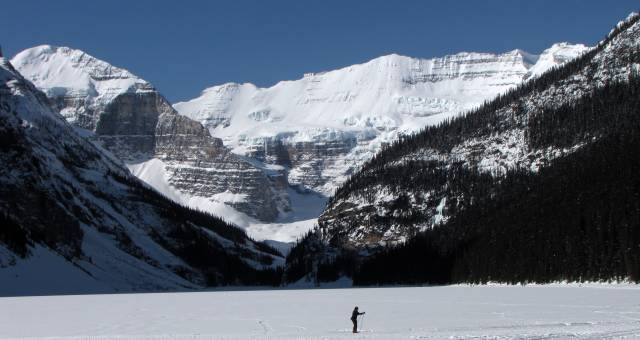 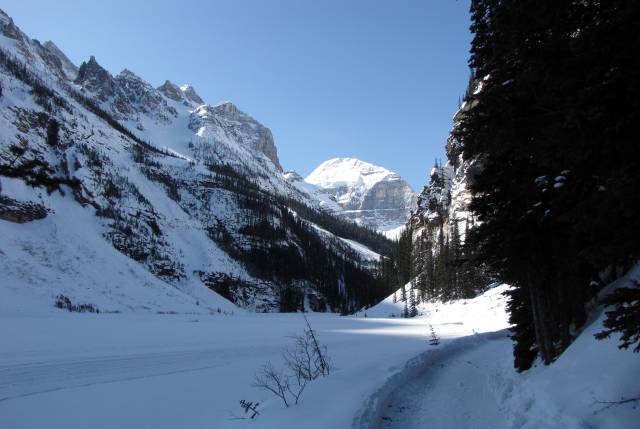 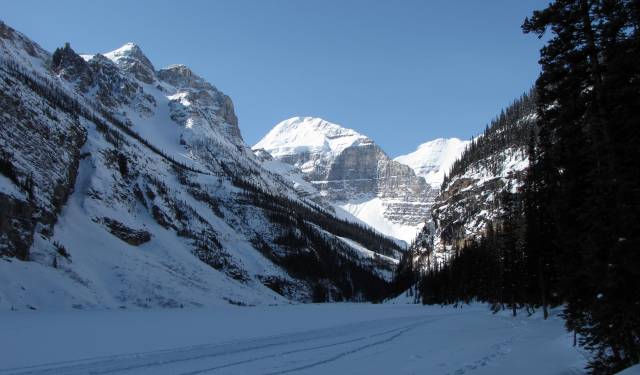 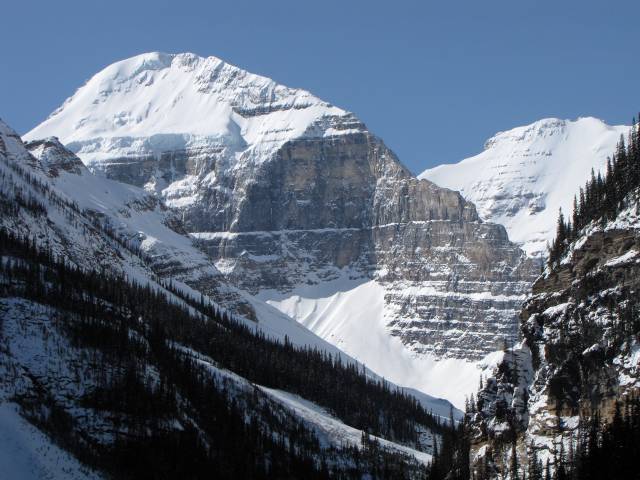 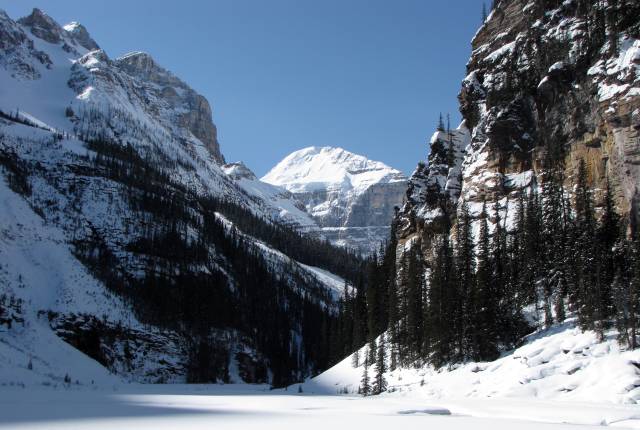 At the west end of Lake Louise, the Lakeshore Trail ends at a trail sign documenting continuing trails.  A primitive ice sculpture is made of haphazard blocks of fallen, blue ice from Louise Falls, which is directly to the right.

Louise Falls is a very popular and easily accessible, 110 m (361 ft) WI 4-5 ice climb.  The hike proceeds further into the valley past snow-draped, rock walls which are bolted and anchored for recreational rock climbing. 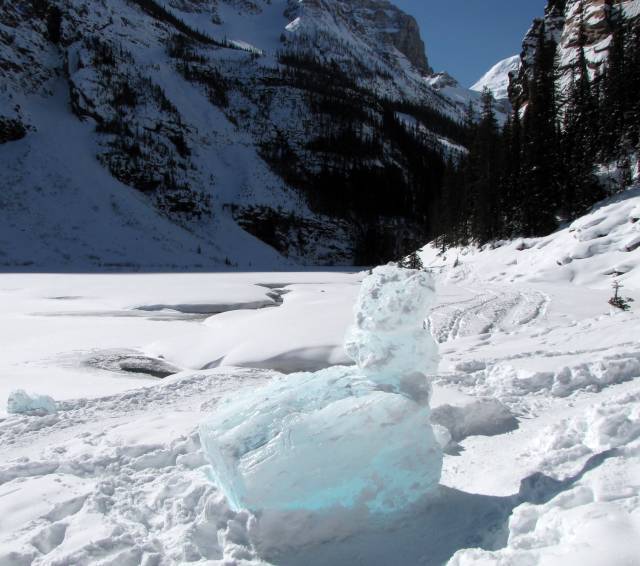 A rugged ice sculpture created from blocks of fallen, blue ice from nearby Louise Falls at the west end of Lake Louise in Banff National Park, Alberta, Canada 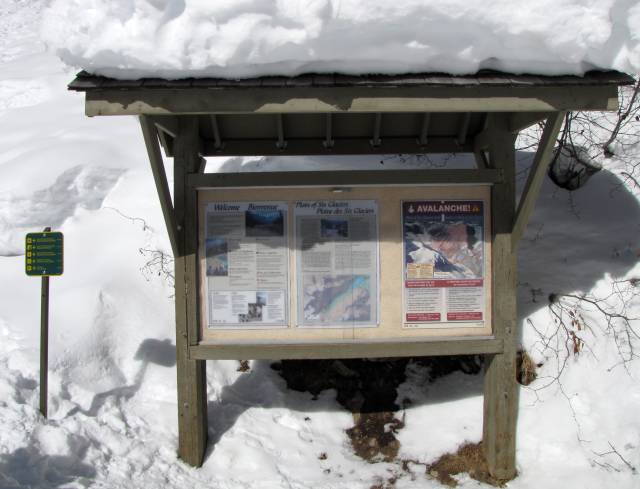 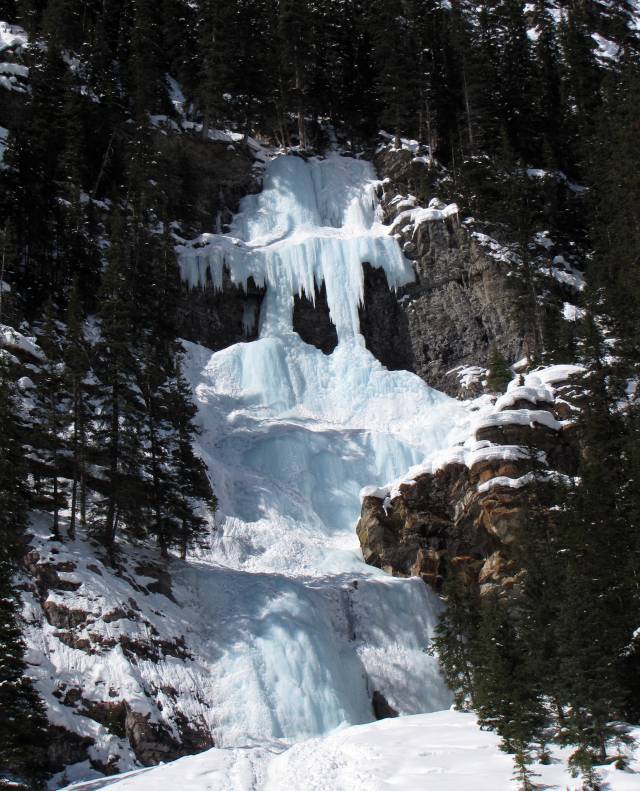 The initiative to gain a better photographic position is thwarted by dense evergreen forest.

The consolation prize is the discovery of Cable Gullies, a 15 m (50 ft) WI 2 ice climb.  There are many ice climbing opportunities in the area as documented in the definitive guide 'Waterfall Ice, Climbs in the Canadian Rockies' authored by Joe Josephson however this book may be unavailable.

There is potential avalanche risk here.  Due diligence is prudent. 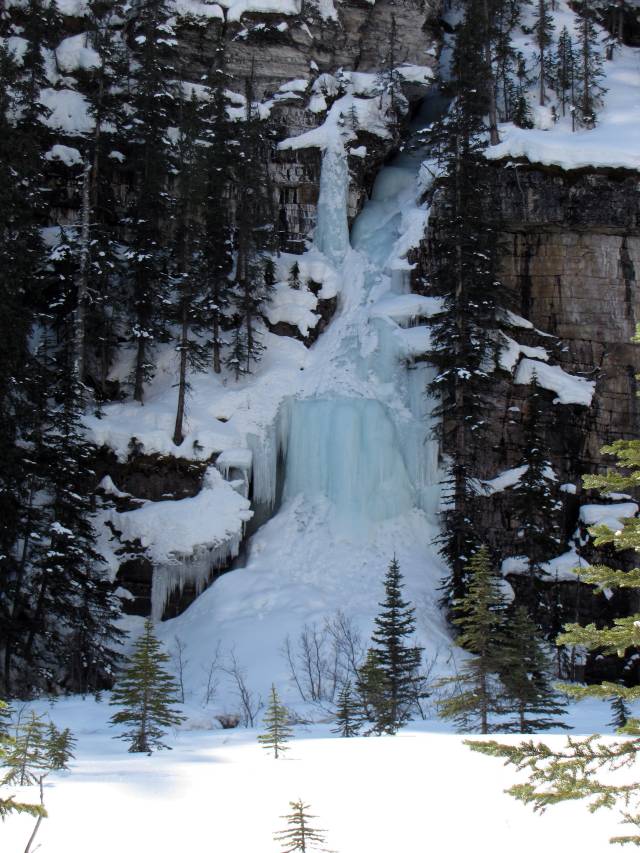 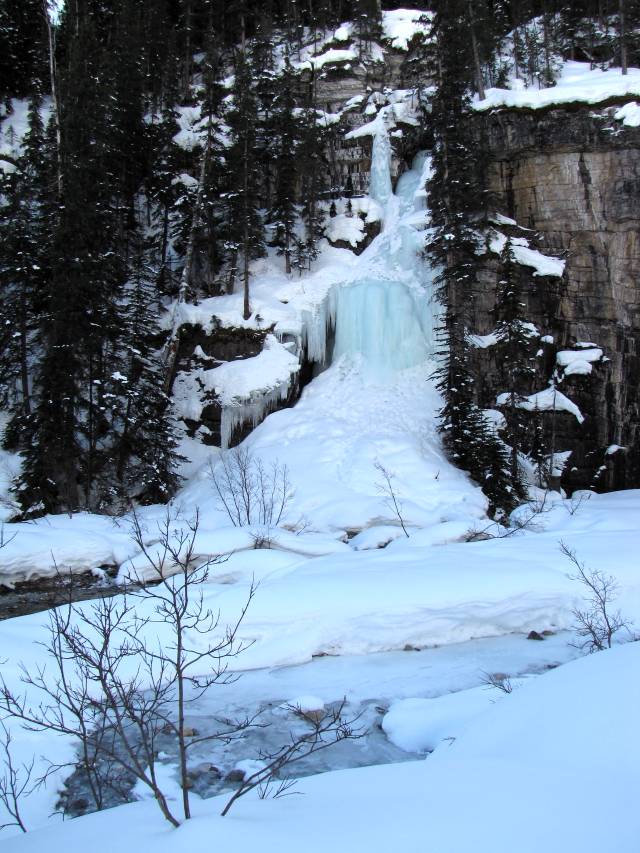 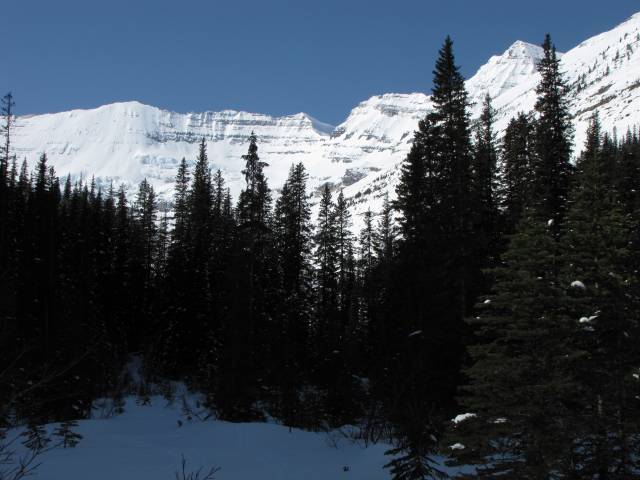 The return to valley center leaves a lingering thirst for better photographs of the Plain of Six Glaciers.

Following an appreciation of the view back to the Chateau Lake Louise, at the far east end of Lake Louise, an off trail trek uphill begins through the valley bottom knowing full well my leather hiking boots are unlikely to keep me near the surface of the deep snow.

The recent snow is deep but sufficiently settled to support my weight on hiking boots equipped with hiking crampons.  If legs begin to post hole, the mission will be abandoned. 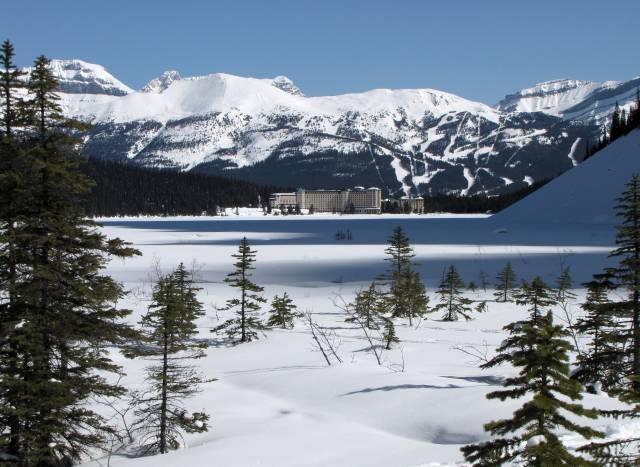 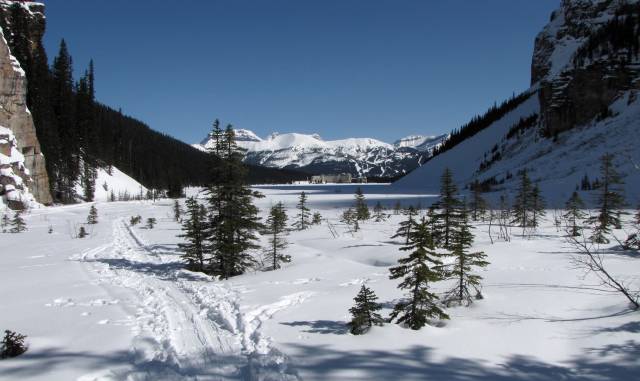 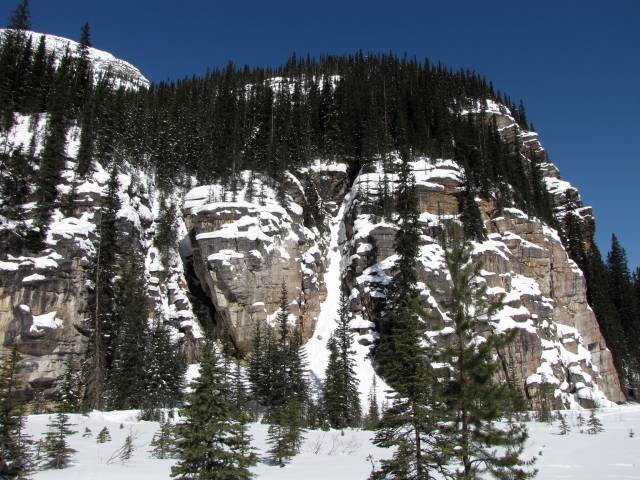 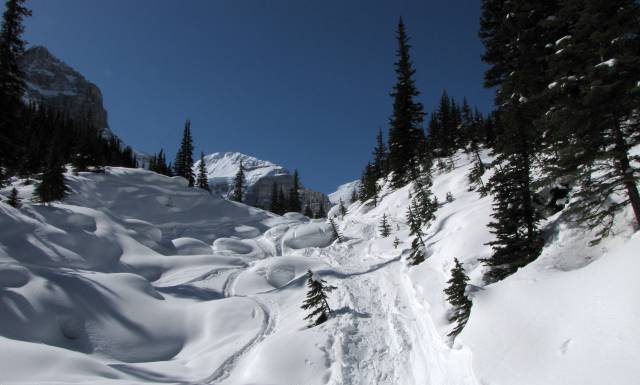 About a kilometer past the end of the Lakeshore Trail, undulating terrain rises above a slope and the Plain of Six Glaciers expands into view.

The view is breathtaking and enjoying the scene on this beautiful day is a prerequisite to capturing the image and turning about to retrace steps.

Expectations are exceeded and the mission is well worth the time and effort. 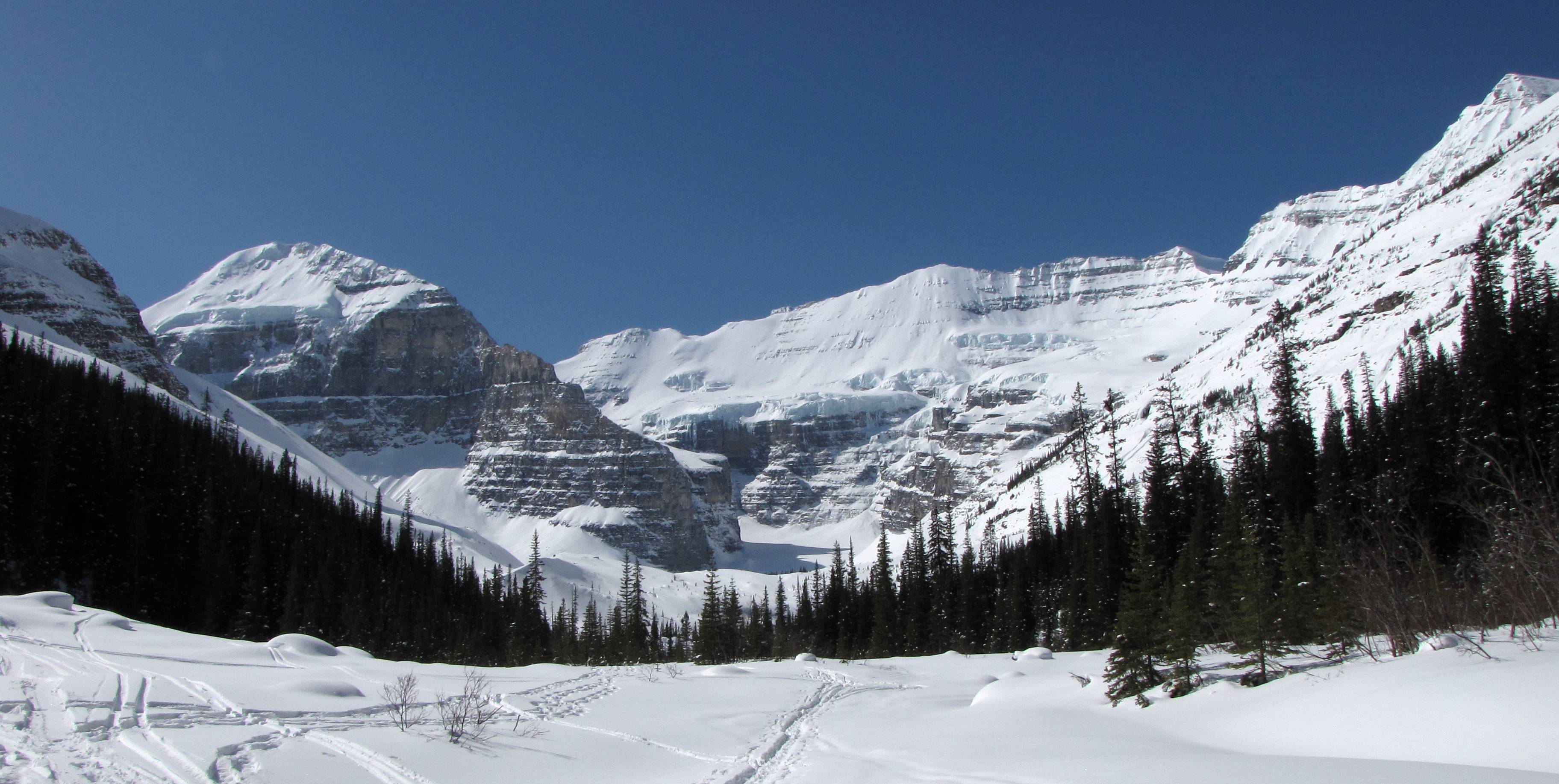 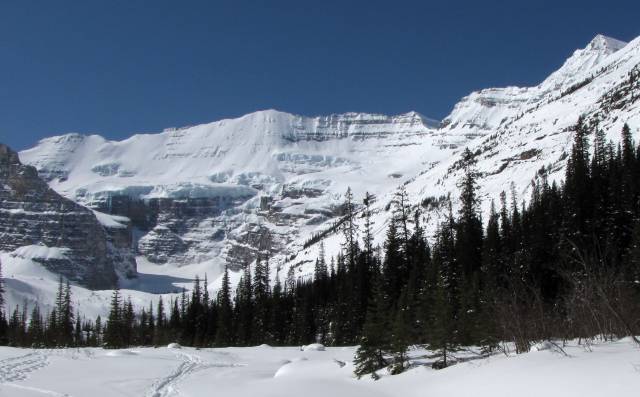 The return hike over the natural snow moguls  returns to sculptured, flat fields of snow and the gradually expanding presence of the Chateau Lake Louise. 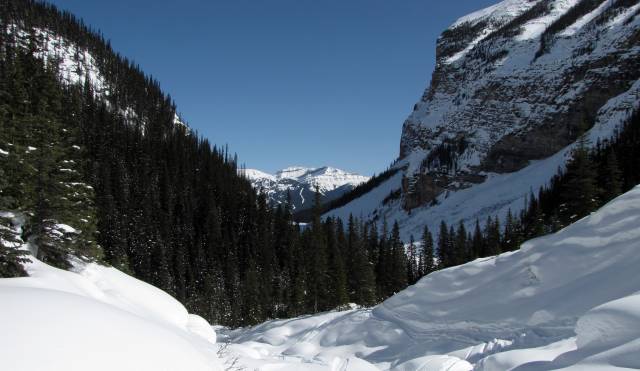 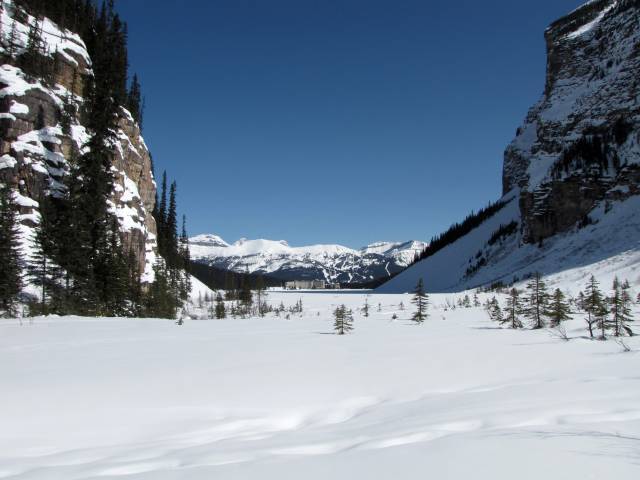 The long delta at the west end of Lake Louise features rivulets of crystal-clear, running water in channels of deep, wind-sculpted, smooth snow, possibly from some glacial melt against warming rock but, very likely, supplemented by warm water from underground hot springs.

The flowing lines provide an opportunity to capture a few artistic images, even though the pictures are scant substitution for the full sensory advantage of cool air, sunshine and full vision combined with mountain fresh odors and sounds. 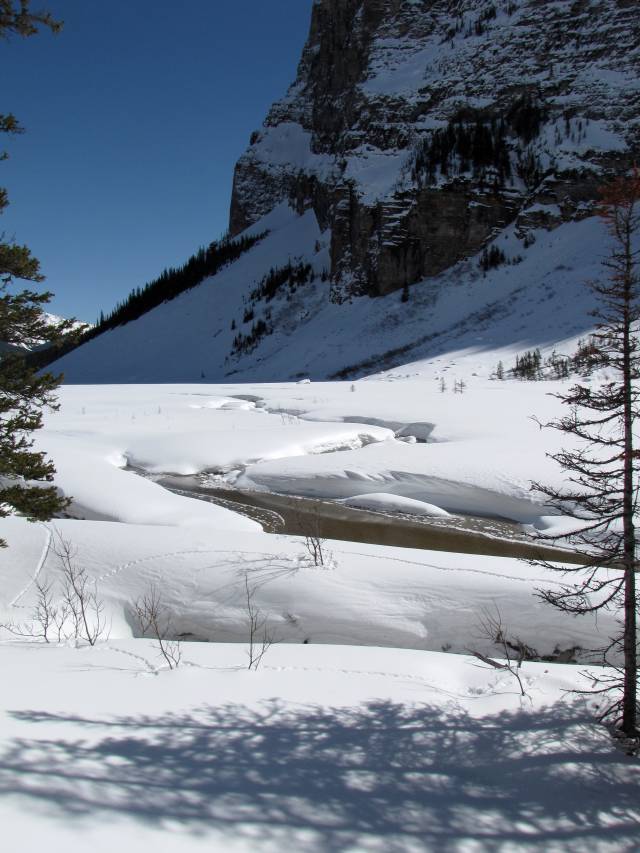 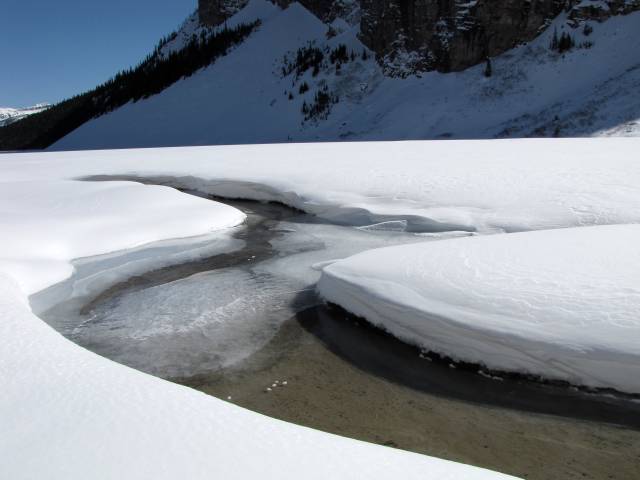 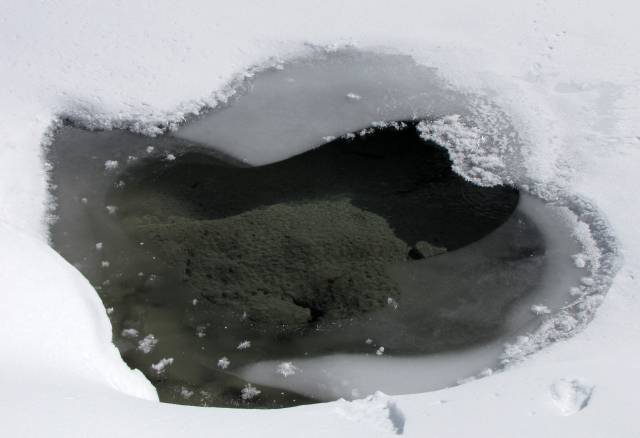 Instead of hiking back on the Lakeshore Trail, the return hike will proceed directly over the frozen surface of Lake Louise, away from the more avalanche prone Fairview Mountain side and beside the track set for cross-country skiers. 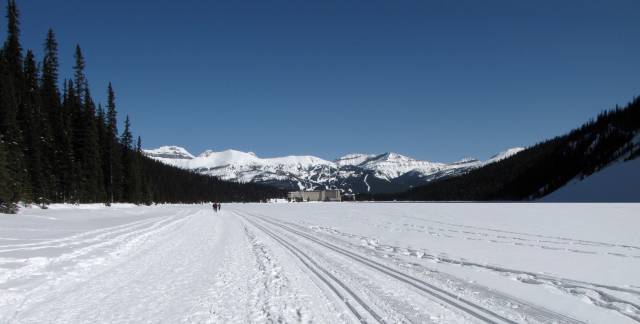 Drive the descent on Lake Louise Drive features a stop at the trail-head for the Great Divide Bike Trail which is groomed for cross-country skiing in winter.

The Great Divide Trail crosses the Continental Divide into British Columbia and a veritable treasure of trail in Yoho National Park. 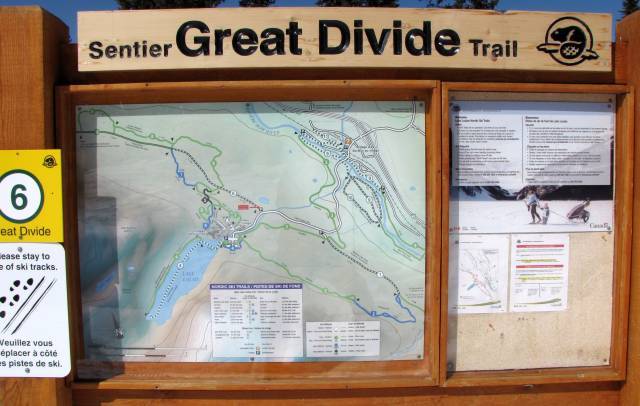 This wonderful and energizing spring day has been the perfect definition of the diversity and beauty a winter in the Canadian Rockies can provide.