Contrary to the weather forecast, Kananaskis Country is not enjoying the unseasonably warm, sunny day realized in Calgary.

It will be an all season day featuring a natural gallery of snow sculpture and plenty of fresh air on the snowshoe from the Elk Pass Parking Area in Peter Lougheed Provincial Park to the border separating Alberta and British Columbia.

The early morning drive from Calgary, under clear skies, gives way to overcast conditions and a light dusting of corn snow at the Elk Pass Trailhead near the end of Kananaskis Lakes Road.

The snowshoe begins on wide, clear path beneath hydro transmission lines predominantly tracking to the southeast.  The 5.8 KM (3.6 mile) one-way trail is well-defined and packed firm from weekend traffic.  Within a short distance the trail veers right, crosses a snow-bound creek and enters the forest where the breeze and accompanying wind chill is substantially reduced.

Note: This trail is not a first snowshoe for a beginner.  Combined with trail length, this snowshoe hosts elevation gain of 222 m (728 ft), but gross gain is at least 30% above net.

The forest jaunt exits to another gradual elevation gain under hydro transmission lines and, after another short distance, continues climbing in forest to the left.  Returning to the open area under the hydro lines leads to mountain views beyond a deep valley.  A sharp turn right shares a steep downhill ski trail which leads to the junction of the Elk Pass and Boulton Creek Cross Country Ski Trails.

The Elk Pass Trail continues under hydro lines on the far side of the valley.

Here, a clearly signed snowshoe trail enters a magical, short section of well-defined trail adjacent to Fox Creek, which is largely buried under snow.  Mesmerizing snow sculptures are prolific in this well-protected area of the valley.

This short scenic section of snowshoe trail meets the junction of the Hydroline and Elk Pass cross-country ski trails near a bridge over Fox Creek.  Directly across from this junction is a clearly marked avalanche risk zone.  The snowshoe trail shares the uphill climb on the Hydroline Trail.  People on snowshoes use the side of the trail to avoid compromising the integrity of ski runs.  It is common courtesy and trail etiquette which reduces the risk of injury.

The trail climbs aggressively around the side of a steep, forested slope and exits onto open terrain beneath hydro transmission lines on the other side of the deep valley.

From here, the route is just over 3 KM (1⅞ miles) of rolling, monotonous, straight-line, elevation-gaining trail to the top of Elk Pass.  The wind is gaining strength and gusting, from the left and predominantly behind, so there is a a bit of a push and the effort of snowshoeing is balancing the increasingly noticeable wind chill. 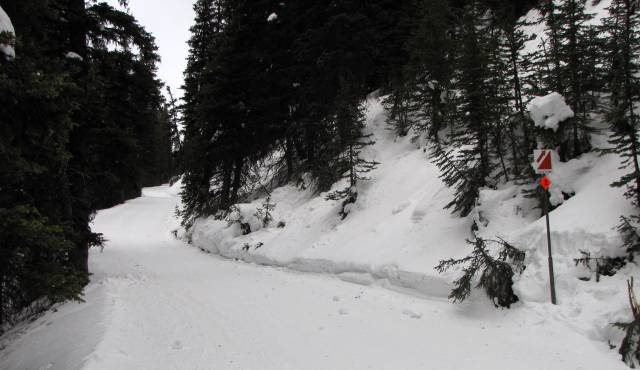 It is snowing and the wind is drifting existing ground cover so the defined trail is filled with fresh snow which creates a better snowshoeing experience.  The sun is trying hard to break through heavily overcast skies but is never successful beyond creating the occasional anemic hint of shadows.

The border of Alberta and British Columbia is defined by a solitary picnic table and an End of Trail sign.  Immediately I am joined by a pair of Whiskey Jacks (Gray Jays).  I grab a snack and gear up in warmer clothing, with increased skin cover, for the return trip by the same route, into gusting wind and horizontal blowing snow. 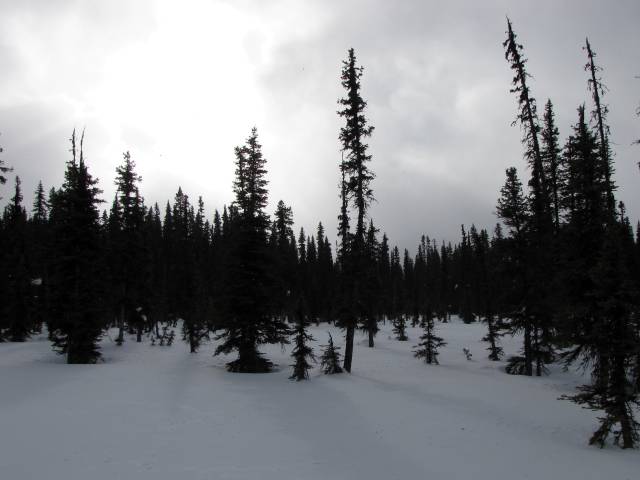 Just prior to leaving, I am joined by two weathered, women skiers from New Zealand who are skiing into Alberta from an overnight stay at British Columbia's Elk Lakes Cabin, 4.2 KM (2⅝ miles) beyond Elk Pass in Elk Lakes Provincial Park.

1.2 KM (¾ of a mile) later, I have had all the fun I can stand and wimp out with a left turn on the Patterson Cross Country Ski Trail to escape the wind and blowing snow.  Trail is shared with cross-country skiers within the shelter and scenery in the valley.

Scenery is spectacular on the descent of the 0.5 KM (¹⁄₃ mile) Patterson Trail.  Subdued images of mountains, created by increasing snowfall, are framed by snow draped evergreen trees.

Snowfall is gentle and vertical as the descent continues to the junction of the Patterson Trail meeting the Elk Pass Trail which curls its way along Fox Creek.

Occasionally, a gust of howling wind above me will dislodge large clumps of snow from trees near the top of the valley.  They roll down the steep, treed slope to my right.  Some make it through and I need to dodge them as they cross the ski tracks.

Fox Creek is predominantly on the left.  It is like snowshoeing beside a continuous, 2.6 KM (1⅝ mile) sculpture of naturally contoured snow.  Beautiful, graceful and peaceful.

Back at the junction of the Elk Pass Trail with the Highline Trail, the route leaves the ski trails to rejoin the narrow, picturesque snowshoe trail of snow sculpture in dense forest along Fox Creek before climbing out of the valley to familiar trail beneath the hydro transmission line.

The descent to the northwest, all the way from Elk Pass heads directly into a commanding view of Mount Indefatigable above Lower Kananaskis Lake.

On the final stretch of trail beneath hydro lines, with forest sections on either side, there is a captivating creek crossing which deserves a pause for pictures and enjoyment of gentle water flow through sculptured snow.

There is a virtually endless supply of statuesque snow draped from trees along trail side.

This snowshoe day has been an excellent example of the need to be prepared for unexpected and dynamically changing weather.  It can become important to carry extra layers and a few bits of ancillary clothing to maintain comfort.   Such is the way of the mountains.

The drive to Calgary passes through two blowing snow episodes driving north along Kananaskis Trail prior to the drive east on the TransCanada Highway, in sun, as forecast.