Sawmill Loop is an excellent snowshoe off Smith-Dorrien in Kananaskis Country, Alberta, Canada.

The early morning, twilight drive west from Calgary is directly towards a setting full moon, suspended in a predominantly clear sky, over the front range of the Rocky Mountains.

As a brilliant sunrise forms up in the rear view mirror, clouds turn pink and gradually morph to orange until dramatic pastels give way to daylight for the drive south on Kananaskis Trail.  The ride is typical and the breathtaking beauty is routine. It is going to be another grand day. 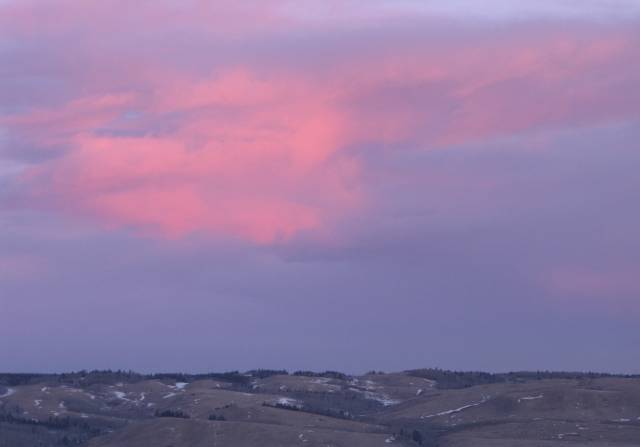 Sunrise over the Ghost.

Sunrise on Mount Yamnuska, 'The Yam' in the Bow Valley Corridor, Alberta, Canada.

Heading south on Kananaskis Trail (Hwy 40), the sun rises above the Fisher Range to illuminate mountains in the Opal Range.  Mount Kidd is saturated with sunlight.

At the Kananaskis Trail winter closure gate, the turn west onto Kananaskis Lakes Road leads to the right turn near the Pocaterra Day Use Area to gain elevation north-west on the Smith Dorrien Trail (Hwy 742) past Spillway Lake and the Peninsula Day Use Area.

About 17 KM (10⅝ miles) later arrival at the nearly buried Sawmill sign and turn into the parking area a bit further north.  It is easy to select a coveted, sunny spot because my car is the only one in the parking area.  On a winter weekend day the 80 vehicle parking area would be packed beyond capacity. 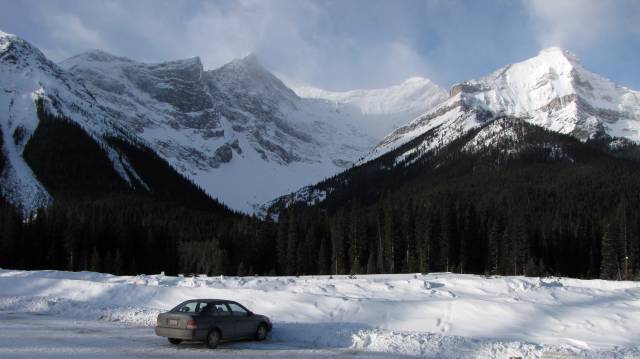 The trail-head for the clockwise snowshoe of the 5.0 KM (3⅛ mile) Sawmill Loop, as defined in the Kananaskis Country Snowshoe Trails brochure, is clearly visible to the north of the parking area beyond the handy biffy.

Elevation gain is listed at 155 m (509 ft).  The well-trodden trail leads past familiar red-orange, triangular snowshoe trail markers into forest.  The Winter Trails map shows the multitude of snowshoe and ski trail opportunities in the area between Sawmill and Chester Lake.

At several dips in the trail over stream crossings, running water peeks through sculpted blankets of snow.  Creek flows host fascinating, intricate ice and frost sculptures that command attention and capture the imagination.

The initial stretch of relatively flat trail begins to gain elevation more aggressively (the warming aerobic component) and mountain views start to open up, ahead and behind.

The Sawmill Loop turnaround point is a multiple trail junction.  All snowshoe trails have been well used and are clearly defined.  One trail which catches the attention, continues 3.9 KM (2⅜ miles) north to a tantalizing viewpoint in questionable terrain beneath Mount Chester.

It will change a 5.0 KM (3⅛ mile) snowshoe to 12.8 KM (8.0 mile) excursion and potentially increase the solo risk profile.  Not out of the question, but it will change the plan for a casual day into a more aggressive day, so reluctantly, the decision is made to leave the viewpoint for another day and continue on plan.

They are works of art emphasized by light and, like visions in ice and frost, provide the massive contrast between the enormity and intricate detail of surroundings.  Magical!  Consuming!

Bunny tracks and snow mushroom on a stump in a plain of sun-drenched sparkling diamonds.

At the next trail junction, there are two return routes to the Sawmill Parking area.  One is a 1.5 KM (1 mile) ski route, which drops into the valley, that has been clearly used by the majority of those on snowshoes.

The other is the less used 1.9 KM (1¼ mile) route which maintains altitude longer for better views of surrounding mountains.  The longer route intended for snowshoes is chosen and reaps the benefit of more spectacular vistas.

Familiar mountains enter the field of vision and beautiful views emerge on the return descent to the Sawmill Parking Area. 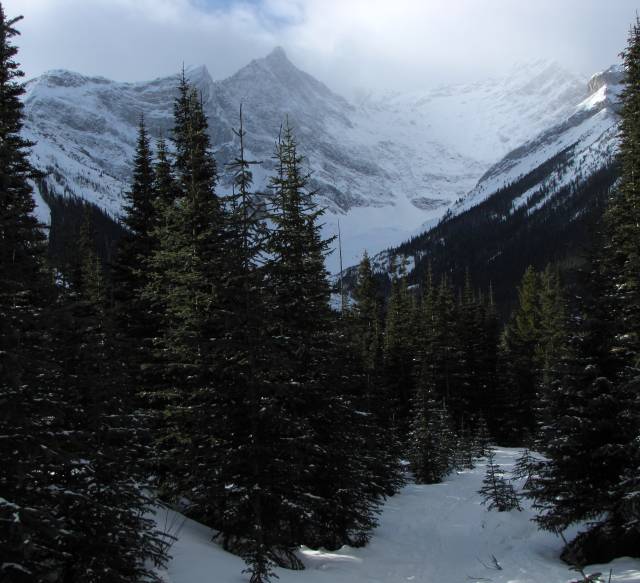 Emerging from the forest into the sun, a snowstorm is forming at upper elevations on the mountains past the parking area, which is now cluttered with three vehicles.

No-one has been seen throughout the entire snowshoe.  It is a special time alone with nature. 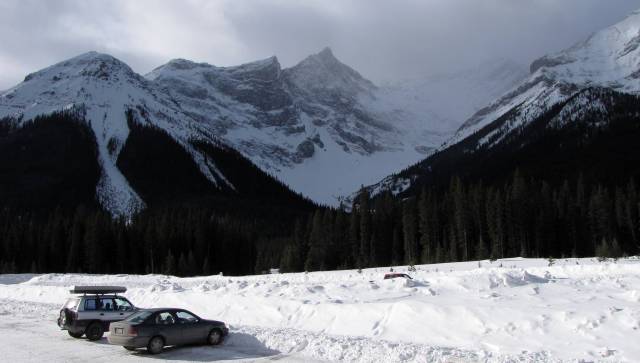 The return drive, twisting down the long hill on Smith-Dorrien Trail, unfolds one of my perennially favorite mountain views in the Fisher Range including Mount Wintour hovering over the Wintour Snowshoe Trail.

The descent off south Smith-Dorrien Trail provides an inspiring and awesome panoramic drive year round.

Following are a few photos of the developing panorama.

This snowshoe experience exceeded expectations.  There are a multitude of trail options for varying degrees of capability and the Sawmill Loop trail is suitable for an aggressive first snowshoe adventure.