On this Monday, weather in Calgary is less than encouraging, but Seija and I meet at the Petro-Canada station near the junction of the TransCanada Hwy with Hwy 22 to carpool west on the TransCanada.

South on Kananaskis Trail to the winter gate is followed by a short jog west on Kananaskis Lakes Road, then north on the Smith-Dorrien Trail past Sawmill to the Burstall Day Use parking area.

The weather here is crisply cold but markedly different to Calgary.  It is not snowing and visibility is excellent under lightly overcast and clearing skies. 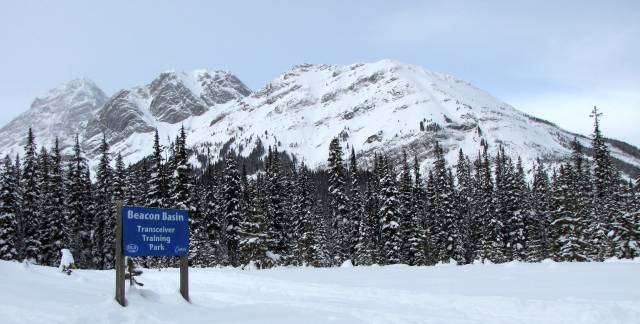 Seija's vehicle is the only one in the parking area.  Following a quick gear-up, the snowshoe begins over the dam past Mud Lake, past the trail signs to the Hogarth Lakes Snowshoe for a turn left at the Beacon Basin Transceiver Training Park, sponsored by Friends of Kananaskis Country, to begin the gradual snowshoe ascent on the Burstall Pass Trail.

Surrounding terrain is stunningly winter beautiful.  Very cold snow squeaks under the snowshoes and hiking poles and we are motivated to maintain a fairly brisk pace which will keep extremities warm.

Mount Burstall 2,760 m (9,056 ft) consumes vision to the left on the south side of the Burstall Pass Trail on the snowshoe west.

Mountains to the right, on the north side of the Burstall Pass Trail begin to peak through snow-draped evergreen forest as the snowshoe west proceeds.  The camera struggles with temperature and contrast.

Behind us, Mount Chester looms over arguably the most popular snowshoe in Kananaskis Country to Chester Lake.

Although Chester Lake may be a bit aggressive for an initial snowshoe, the Burstall Pass Trail can be customized for length with a variety of interesting features along the route suitable for teaching new skills while providing fantastic winter scenery.

Shelter from trees breaks the effect of the wind.  There is minimum avalanche risk from mountain slopes on either side.  It is simply important to stay on, or very close, to the trail.

Seija and I snowshoe past the glacial erratic, a milestone feature resting dead center in the Burstall Pass Trail.  In winter, the huge boulder appears much smaller because the bottom of the rock is hidden by five feet of snow.

Continuing the snowshoe west, snow-clad mountains loom above the forest on the right.  A recent, heavy snowfall has the avalanche risk justifiably pegged high.  It is not a time to approach the steep slopes but it is safe to admire them from the distance.

A trail off to the right leads us directly through the forest to the open expanse of Burstall Lake # 3 and magnificent views of Commonwealth Peak, Pig's Tail (Shark's Tooth) in the middle, and 3,097 m (10,161 ft) Mount Birdwood guarding the west end.

The scenery surrounding Burstall Lakes is a spectacular, awe-inspiring sight.  The snowshoe continues along the south shore of the lake.  Rounding the first bend we are met with gale force, stinging-cold wind and decide to retreat for snowshoeing within the shelter of trees on the main trail.

The glacial erratic resting in the middle of the Burstall Pass Trail appears to be much smaller in winter. The bulk of the huge boulder is buried beneath 5 feet of snow.

A side trail leads, on the right, to expansive views across the frozen surface of Burstall Lake # 3 in Kananaskis Country, Alberta, Canada.

The view of sunlit mountains on the far side of Burstall Lake is breathtaking and the trail continues west over snow-covered ice near the south shore.

Seija and I continue to snowshoe west on the Burstall Pass Trail.  The trail narrows into dense forest with dips and rises.  Occasionally, rock cliffs at trail-side host mounds of snow hanging precariously near the trail.

On the approach to the broad expanse of the alluvial plain west of Burstall Lakes, the chilling wind increases.

When we step out of the forest, we are assaulted by powerful westerly wind that stings exposed skin.  It is not sufficiently strong to knock us off our feet but we need to lean into it.  The ultimate objective for the day is the excellent view of the Robertson Glacier wedged between the flanks of 3,194 m (10,145 ft) Mount Robertson and Whistling Rock Ridge with 3,406 m (11,175 ft) Mount Sir Douglas beyond.

To acquire this fabulous view we need to get near the center of the highly exposed alluvial plain.  The short trip is a 'Praise the Lord and pass the ammunition' endeavor.

The short, successful battle to get the pictures and return to the shelter of the forest for lunch precludes well-earned seating on a fallen tree in a very beautiful and sheltered place.

The view of Whistling Rock Ridge and Mount Sir Douglas as we exit the forest onto the expanse of the alluvial plain. The Robertson Glacier is tucked around the corner to photo left.

The race across the crusty and wind-swept alluvial plain hosts the tops of six-foot shrubbery. The wind coming west over Robertson Glacier is fierce and creates a significant wind chill.

On the race back to the shelter of the forest, a few photos of surrounding mountains above the Burstall Lakes are captured.

To venture further beyond the alluvial plain would place us in territory with high avalanche risk requiring mandatory and specific avalanche gear and training to reduce the risk of potentially fatal consequence. 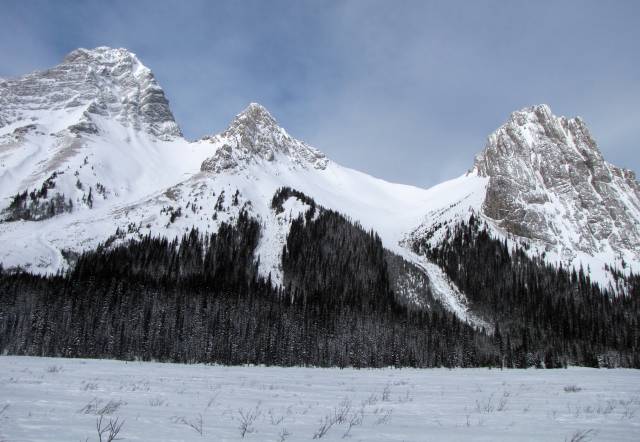 Our lunch spot is a peaceful place in the forest next to a snow-draped rock wall.  There are magnificent views of surrounding mountains on the return snowshoe.

A short off trail jaunt downhill to the creek delivers this magnificent view of the south face of Commonwealth Peak as we get close to the end of the 8 KM (5 mile) snowshoe with gross elevation gain near 100 m (328 ft).  Net elevation is higher but the rolling terrain promotes circulation and warmth.

The day is warming and snow is falling from evergreen branches to give the illusion of lightly falling snow which sparkles like diamonds when it catches the sun.  A constant stream of nature's snow sculpture constantly captures the imagination.

At end of snowshoe there is one final opportunity to capture images of the gorgeous mountains above Mud Lake and Hogarth Lakes in Kananaskis Country, Alberta, Canada.

A view from the dam looking north along the length of Mud Lake in Kananaskis Country, Alberta, Canada.

This magnificent day ends with the grand drive north on the very well maintained Smith-Dorrien/Spray Lake Trail, past Canmore Nordic Centre to the Three Sisters Parkway bypass above Canmore, Alberta.

The sun is shining on Grotto Mountain whose gully hosts the entrance to Rat's Nest Cave.

The return drive to Calgary is swift beneath sun.