In the final half day prior to leaving St. John's, Newfoundland to Halifax, Nova Scotia, the short time remaining in St. John's will be spent exploring more of the Basilica Cathedral of St. John the Baptist.

The Basilica Cathedral was consecrated in 1855 and has enjoyed a fascinating history including the fact it was one of just a few buildings in St. John's that survived the devastating fire of 1892. 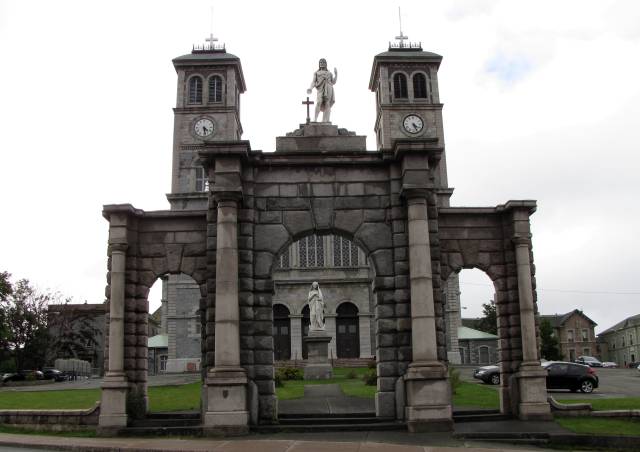 The main building, on historic Military Road, creates a formidable presence overlooking the city where the twin towers are clearly visible from nearly every hilltop for many miles around. 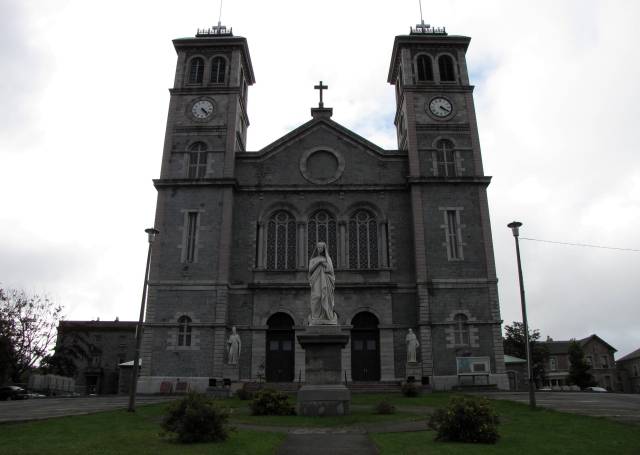 Brass plaques near the entrance identify the Basilica Cathedral as a National Historic Site.  Construction on the Cathedral began in 1839.  It was designated a historic site in 1984. 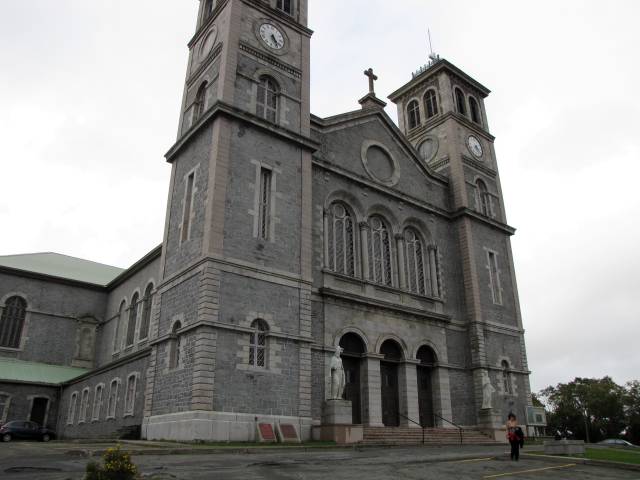 A plaque recognizes the tireless effort of Michael Anthony Fleming for his contribution to the development of the Roman Catholic Church in Newfoundland.

In the centre of the piazza (church yard), at the front of the Basilica Cathedral, there is an 1858, marble, 3.0 m (10 foot) statue of the Immaculate Conception on a granite pedestal.  The sculpture is the work of John Edward Carew from Ireland.

Located at the main steps to the Basilica are marble statues of Saint Francis of Assisi on the East side, and St. Patrick on the West side, also sculpted by John Edward Carew.

There is an impressive assortment of ancillary buildings surrounding the Basilica Cathedral. 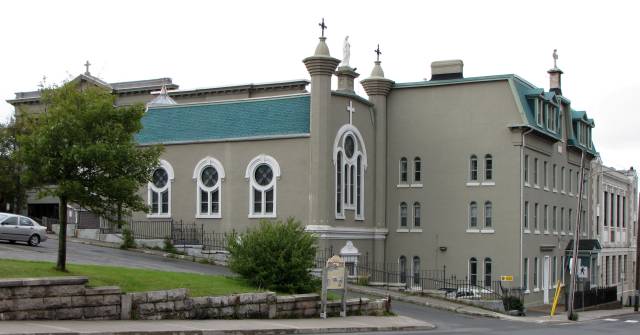 Across Military Road from the Basilica Cathedral is the back of the iron fenced St. Patrick's Hall, now an upscale, expensive, condominium complex, originally associated with the Benevolent Irish Society.

The Altar of Sacrifice, which stands at the front of the Sanctuary in the foreground beneath the High Altar, contains one of the most valued and revered pieces of statuary in the Basilica Cathedral.

'The Redeemer in Death', was sculpted in Carrara marble by Irish sculptor John Hogan in 1850. 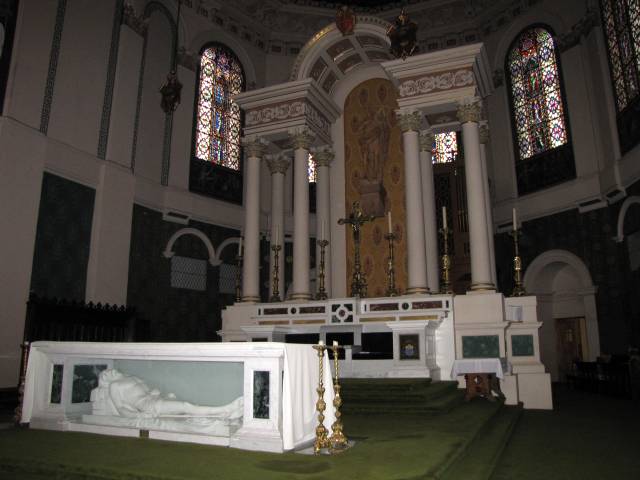 In 1938, the original Grand Organ of 1853, was replaced by a Hammond electronic organ, and subsequently by the current dual organs in 1954-55.  The new organ has 66 stops and a total of 4050 pipes.  The main organ of 51 stops is located in the organ gallery at the back of the cathedral, and the sanctuary organ of 15 stops arranged behind the main altar.

Each organ may be played from the main organ gallery either separately or simultaneously with the main organ.  The present organ was constructed and installed by Casavant Freres Limited of St. Hyacinthe, Quebec.

The pipes, in the organ gallery above the entrance to the Basilica Cathedral, are complemented by amazing stained glass windows.

To the north and west of the Basilica Cathedral is St. Patrick's Hall School. 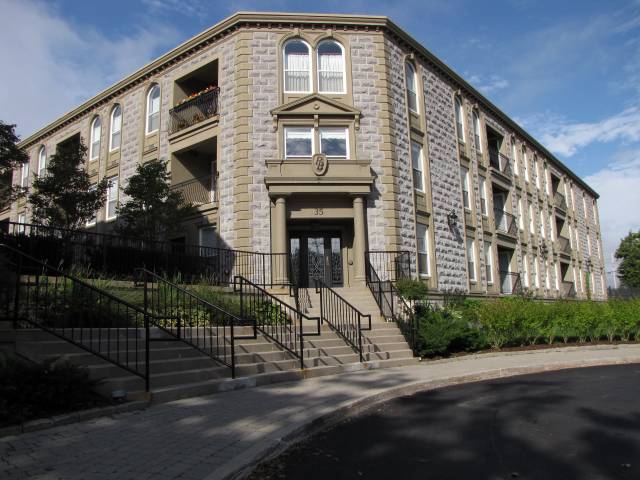 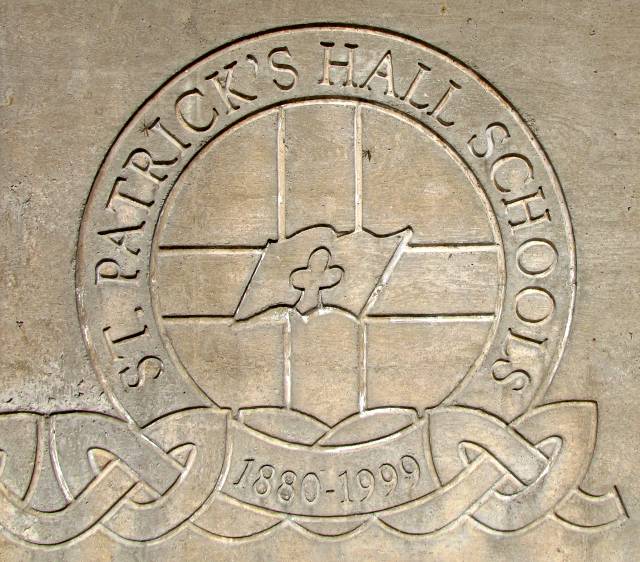 The accumulation of assets and grand artistry is truly an inspiration of enduring vision.  One of the most spectacular pieces of art is 'The Veiled Virgin' 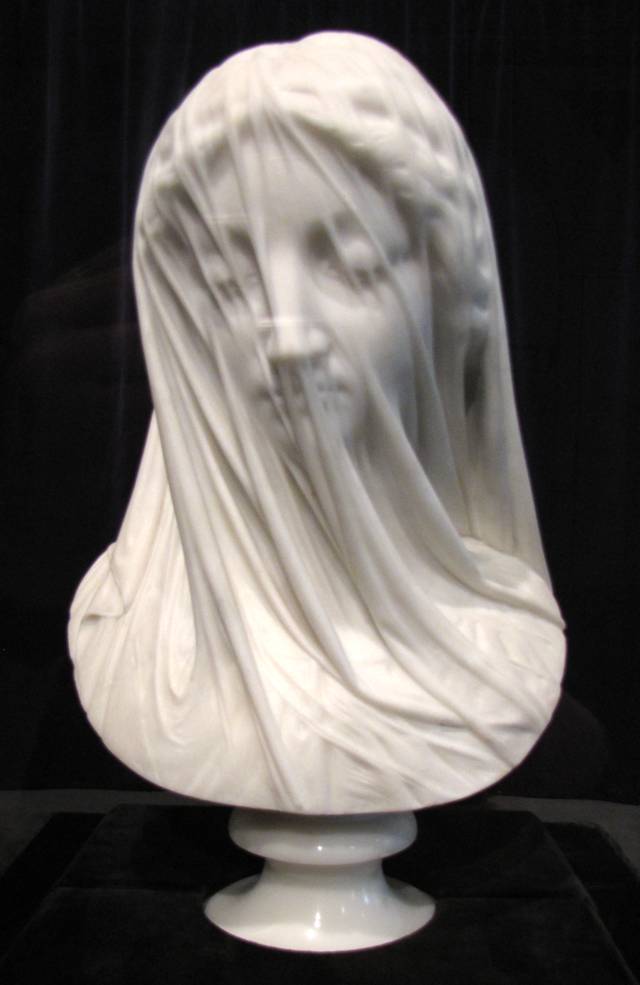 Mélanie and I begin the tour, given by one of the Sisters, knowing we will need to leave soon.

In the short time available we are exposed to just a little of the fascinating history contained in the museum and it is painful to leave.  Absolutely engaging stories of creation and persistence. 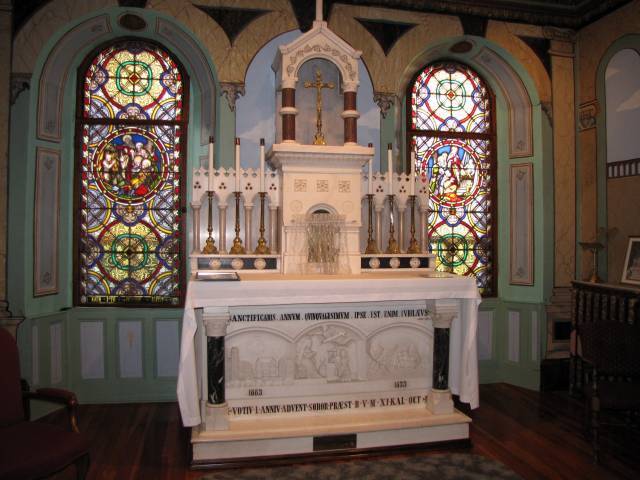 The flight from St. John's, Newfoundland is via Porter Airlines on a Bombardier Q400 turboprop.  Once again, the flight is loaded efficiently, and off the runway a few minutes ahead of schedule.  Service is excellent and the landing in Halifax, Nova Scotia is early on a rain saturated runway.

The front edge of Hurricane Leslie is pushing wet, inclement weather into the southern Maritimes and our drive from the Halifax airport is north through constant rain.  On the drive north we witness torrential and record-breaking rainfall.  The situation is serious near Truro, Nova Scotia and Sackville in New Brunswick as we drive over flooded underpasses.

My final full day at Mélanie's home near Moncton allows time to enjoy breakfast in Shediac, relax, meet friends and do a bit of shopping.  There is a fabulous sunset over the fields as Belle, the dog, gets her final run for the day.

An aerial photo of Toronto Downtown and the waterfront captured on the flight from Moncton, New Brunswick to Hamilton, Ontario via WestJet

The flight from Hamilton, Ontario to Calgary, Alberta via Westjet is straightforward as we chase the sunset over Ontario, Manitoba and Saskatchewan before arriving in late day darkness to end a lifetime ambition and opportunity.

I shall visit Newfoundland and Labrador again.  There are many more amazing sights to see and adventures to experience.  Thank you, Mélanie!