The entrance to Dungeon Provincial Park is a very short distance south of the Cape Bonavista Lighthouse.

The short, gravel road travels 2 KM (1¹⁄₃ miles) along the picturesque and rugged Newfoundland coastline, east towards the Trinity Bay side of Bonavista Peninsula. 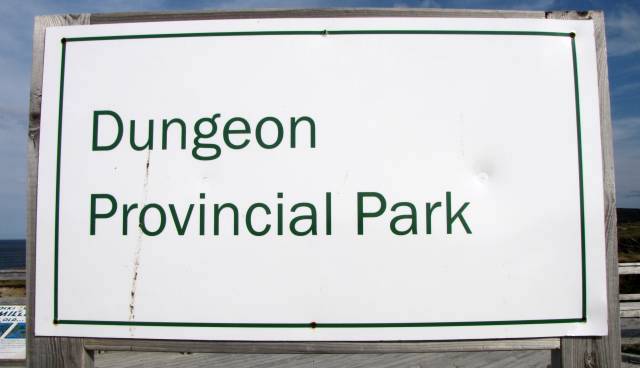 An obvious, weathered, wooden viewing platform, across the road from a small gravel parking area, contains an introductory sign which explains how the 'dungeon' was created and what it will eventually become under the relentless force of ocean waves.

The two sea caves gradually enlarged, over many hundreds of years, to a volume which could not support the ceiling.

Eventually the ceiling collapsed and over many more hundreds of years the debris was pulverized by the force of the waves and washed away, leaving the 'dungeon' seen today.

Eventually the center column will be undermined, leaving a small cove and a sea stack.  Samples of the result are nearby, to the right, in Spillar's Cove. 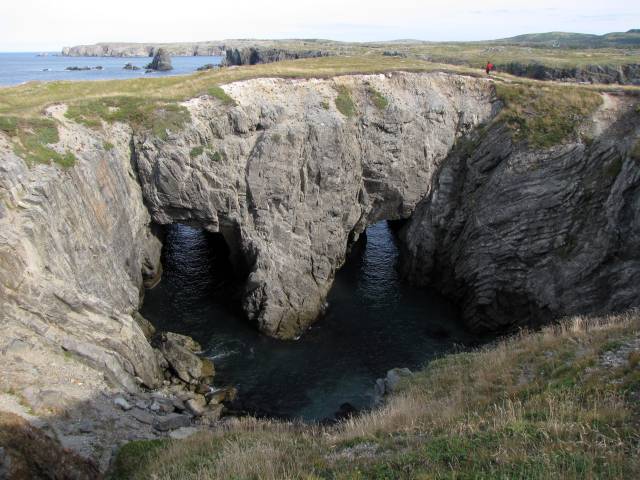 With a bit of gear for safety, it would be interesting to scramble to the bottom of the 'dungeon' for photographs. 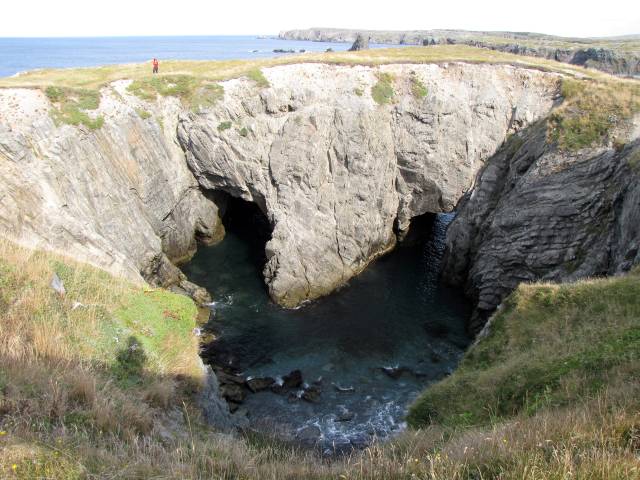 A short walk to another wooden platform at the cliff's edge overlooks the fascinating rock formations along the coastline topped by rolling and pristine green farming fields on the far side of Spillar's Cove.

The gentle, salt-air breeze combined with sun on the skin and the surrealistic sound and beauty of the coastline is medication for the soul.  This is another place where it is important to 'Remember to Breathe'. 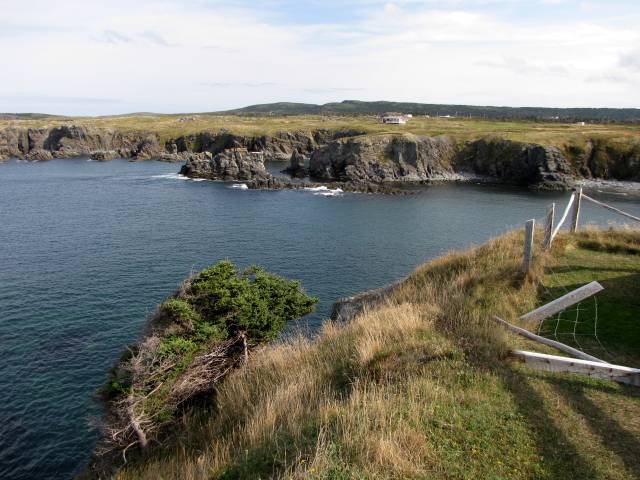 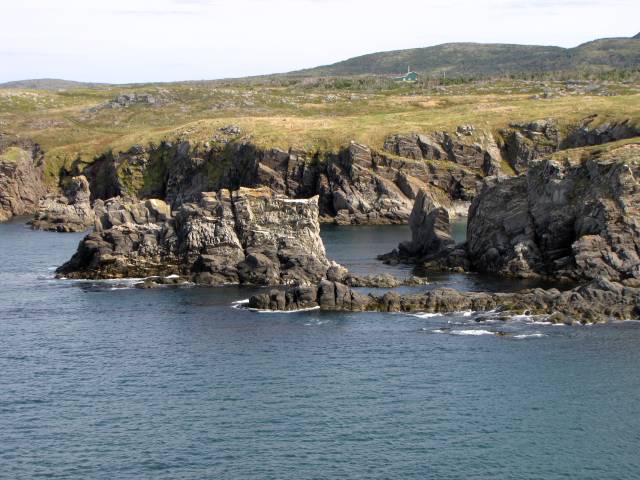 A stroll, reluctantly away from Spillar's Cove, on the path around the circumference of the 'dungeon', leads to the view west along the coast towards Cape Bonavista.

The Cape Bonavista Lighthouse is visible in the hazy distance and a long lens draws it closer.  It is difficult to put the camera down in this beautiful place and more difficult to leave the hypnotic sound and color of surf perpetually pounding against rock.

Each churning wave creates a unique pattern of blue, turquoise and white foaming spray against black, brown and gray rock laced with multi-colored plant life.  Each occurrence is like an audible snowflake.  No two are exactly the same. 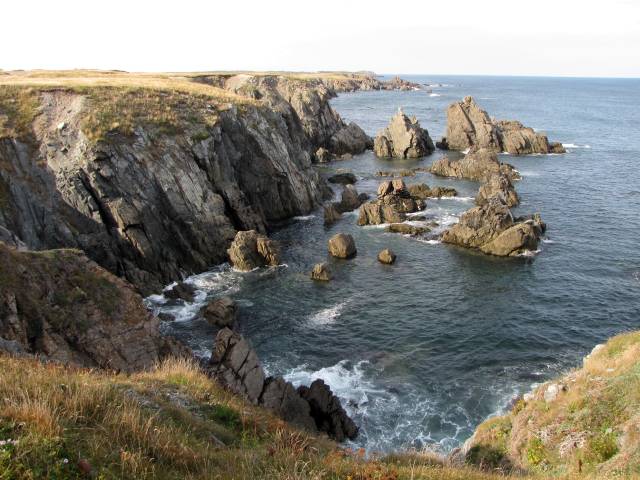 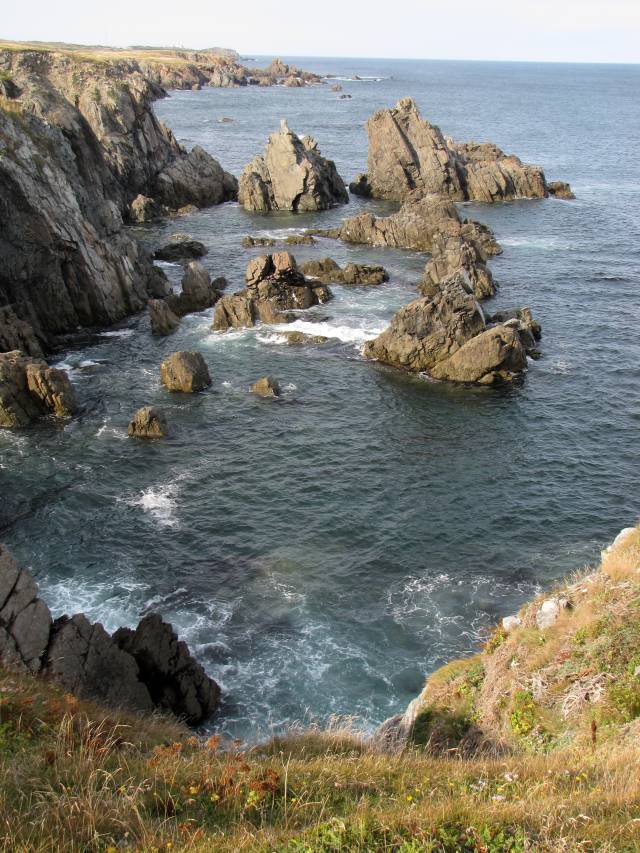 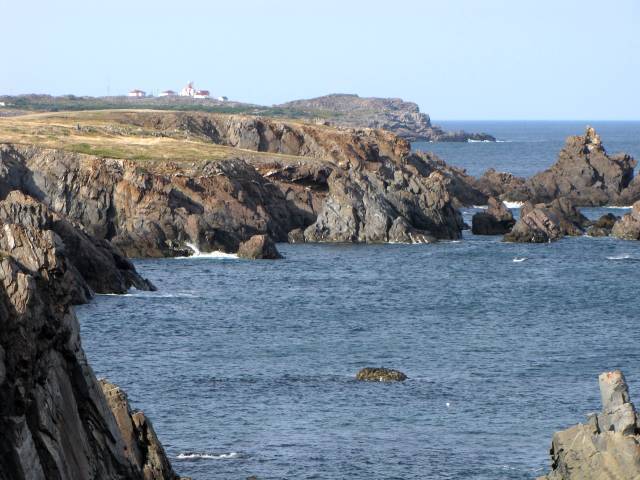 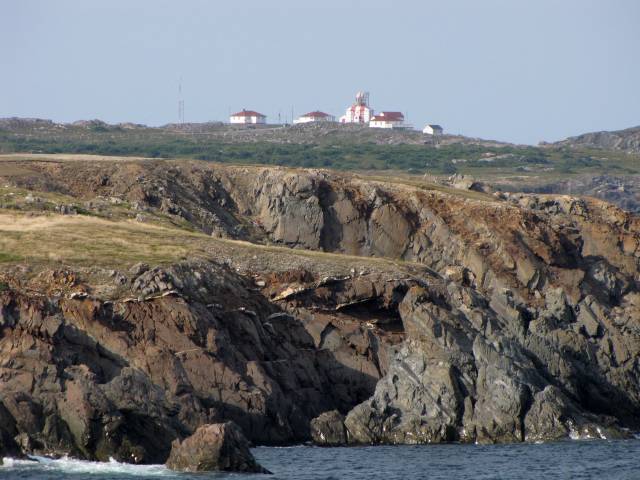 From Dungeon Provincial Park, the drive to St. John's is about 300 KM (188 miles).  Mélanie and I have been sharing the long driving day.

One of Newfoundland's most endearing characteristics is the endless selection of entertaining names of hamlets, villages towns, coves and nearly everything else.  We are making good time on the drive south along the TransCanada Highway when we pass exits for Come by Chance, then Tickle Harbour Station. 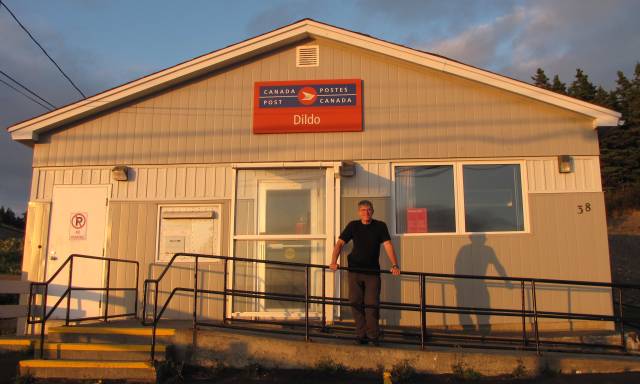 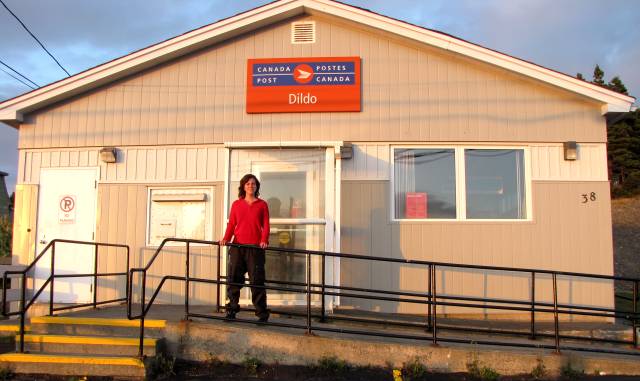 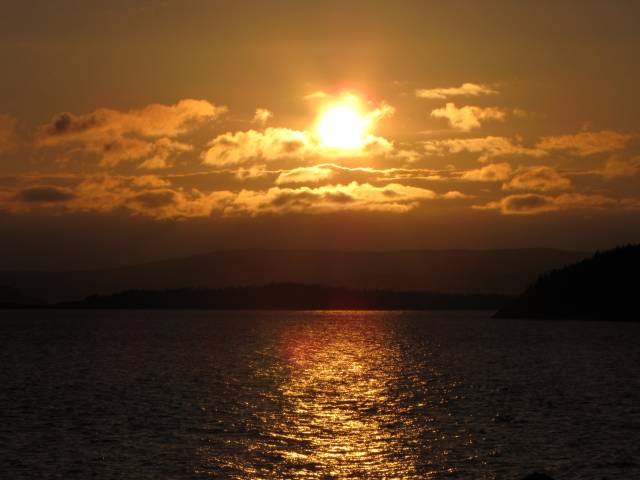 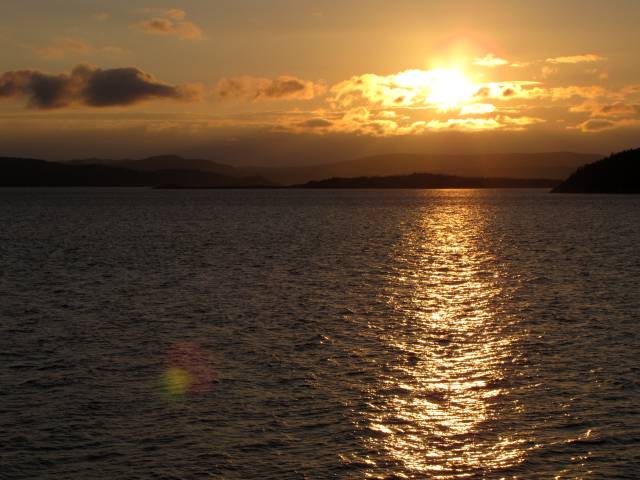 The remainder of the return trip to St. John's is in darkness following wonderful sights and an abundance of fascinating history, possibly at the expense of too much driving in a single day.

Tomorrow will be our final half day in St. John's before the return flight to Halifax, Nova Scotia and the drive north to Moncton, New Brunswick.  Hurricane Leslie is churning off the southern shore of Newfoundland and rapidly approaching the Island.