Cape Spear holds the distinction of hosting Newfoundland's oldest surviving (not the oldest) lighthouse, constructed in 1835, as well as being a National Historic Site of Canada.

The drive south from St. John's passes a typical Newfoundland fishing community along the coast. 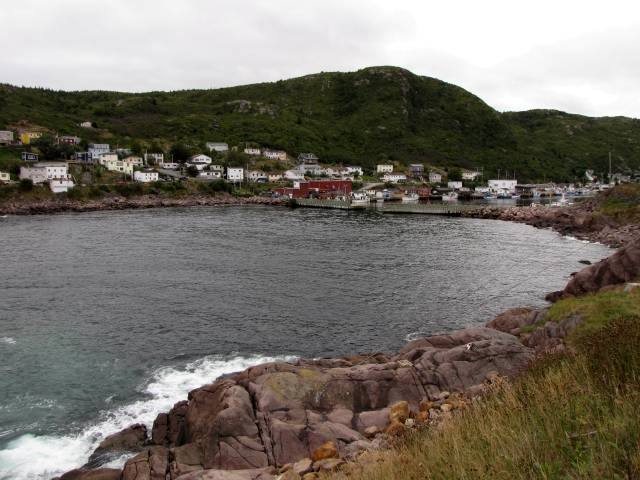 Cape Spear, located on the Avalon Peninsula, is the most easterly point in Canada. 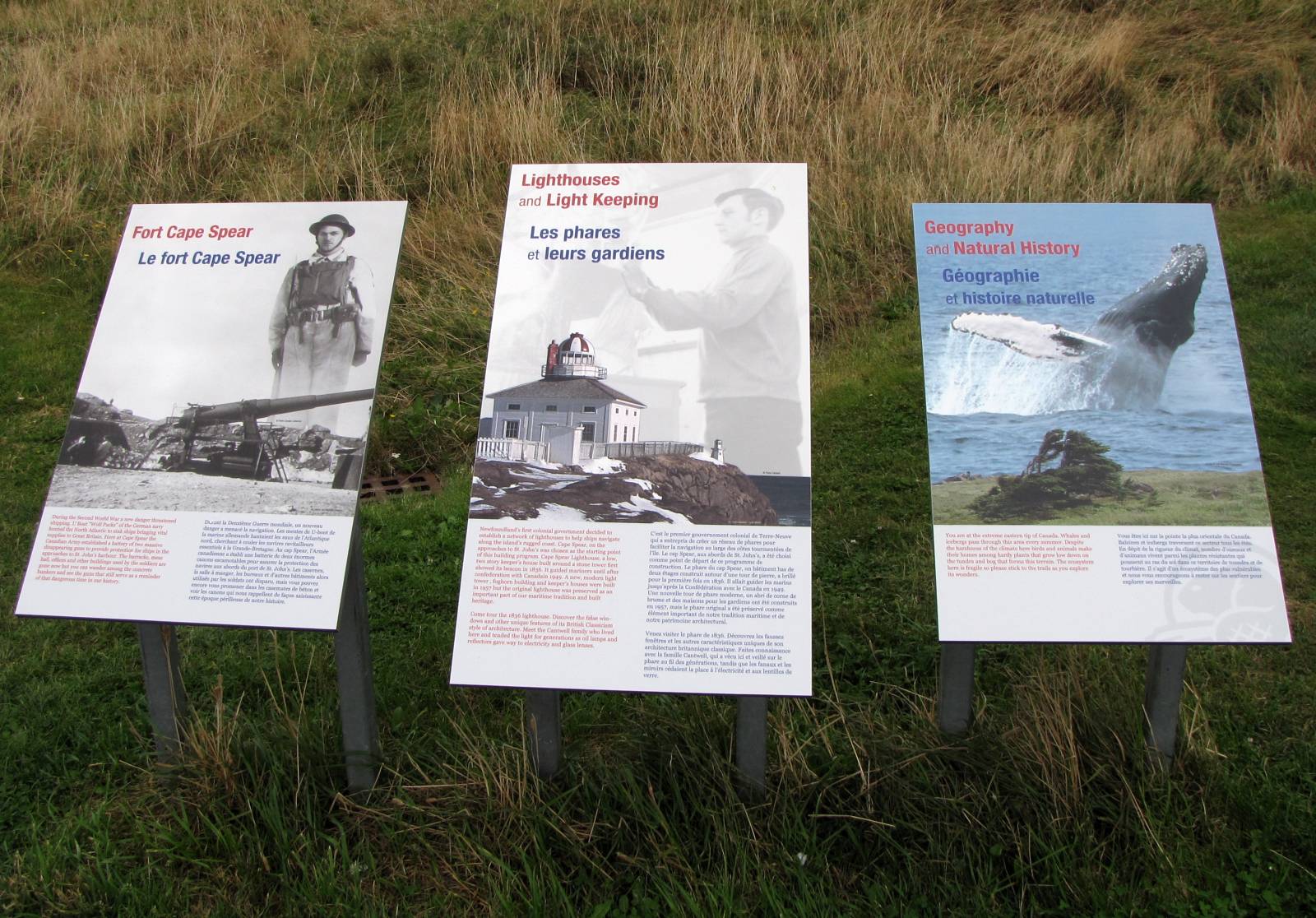 Signage is clear, and the parking area is large with long views over barren land on this large promontory jutting into the Atlantic Ocean.

Mélanie and I choose to visit the lighthouses first, then loop back on the shoreline trail (which is also a short section of the East Coast Trail) to the World War II military complex on the end of the cape.

One side of the Heritage Shop is a small museum containing memorabilia and models of the Cape Spear Lighthouse as it changed throughout its years of service between 1836 and 1955.

The other side is a gift shop.  Mélanie emerges with T-shirts.

The raised building across the path from the Heritage Shop is serving as an Art Gallery under the auspices of the Canadian Cost Guard Alumni Association but the exhibit, unfortunately, is closed during our visit. 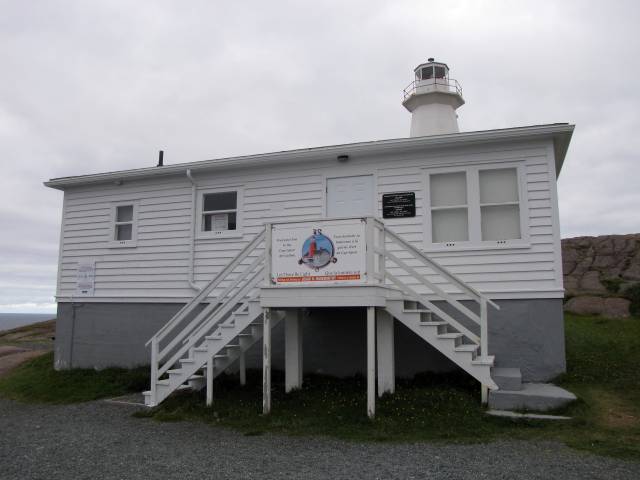 The new, working lighthouse began service in 1955 and continues the role of providing a safety beacon to ships approaching St. John's, capital of Newfoundland. 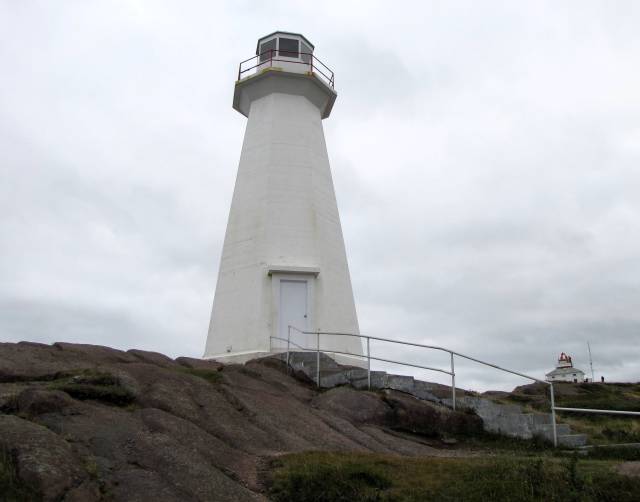 As Mélanie and I walk the shallow grade uphill towards the historic Cape Spear Lighthouse, a look back highlights the Hibernia Supply Ship sailing past, off the Cape Spear coast after becoming accustomed to seeing this bright orange ship docked in St. John's harbor. 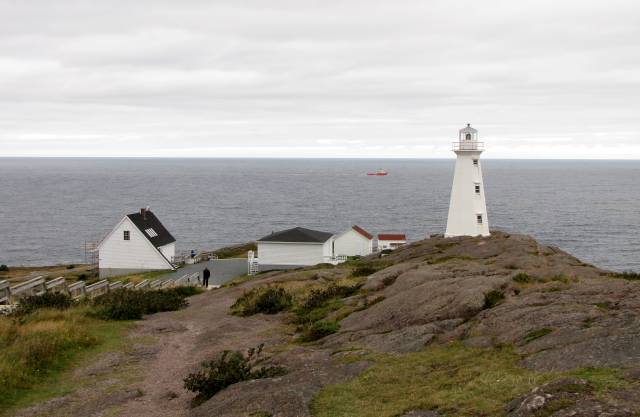 The historic Cape Spear Lighthouse is restored to its original appearance in the 1835 to 1840 period.  The architecture is unique with a neoclassical form.

The building had base extensions added, altered and removed over its 120+ year lifespan.  The Cape Spear Lighthouse was designated as a National Historic Site on May 22, 2007.

A tour inside the lighthouse reveals a representation of life as it was in the middle 19th century.

The wooden spiral stairs around the concrete column are snug navigating between floors to take photos of the storage and living areas in the squat wooden structure. 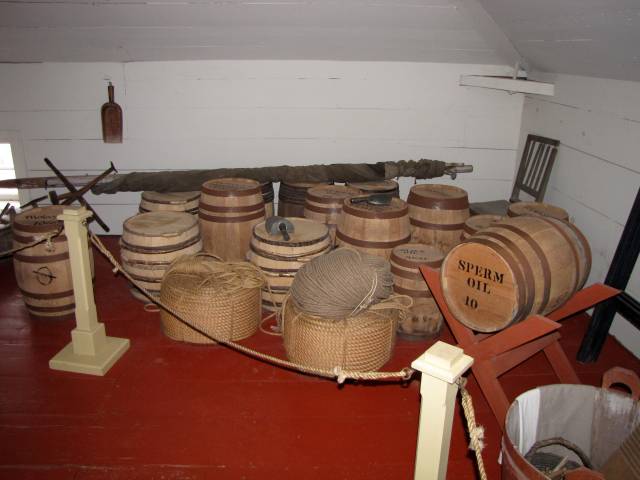 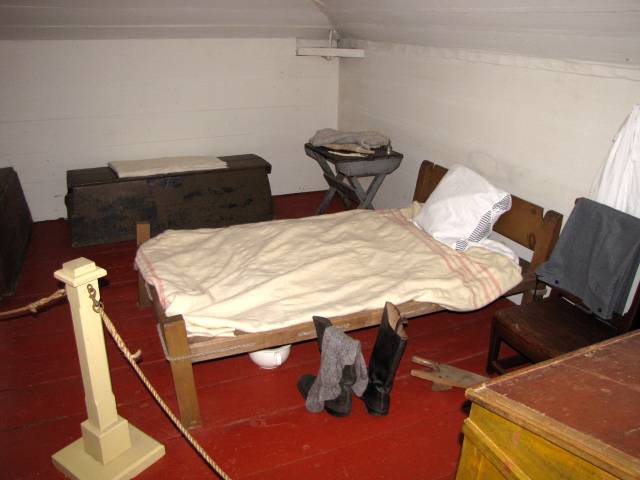 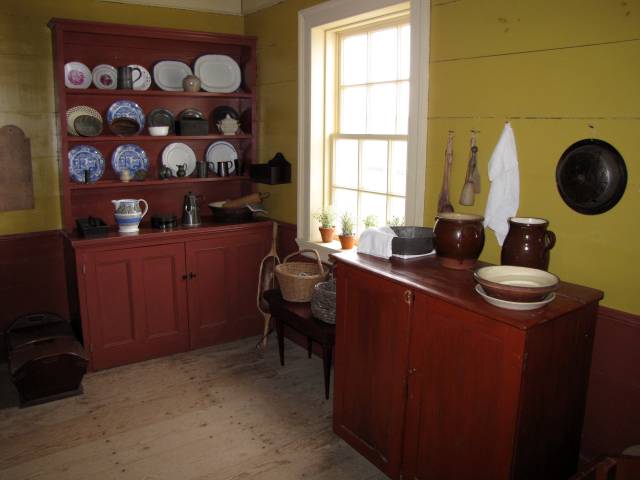 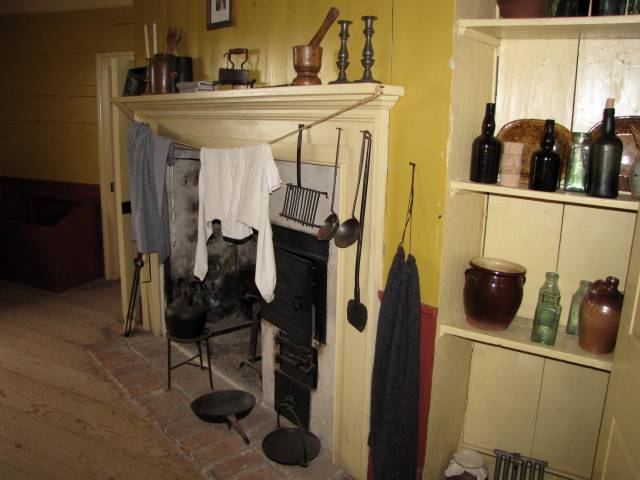 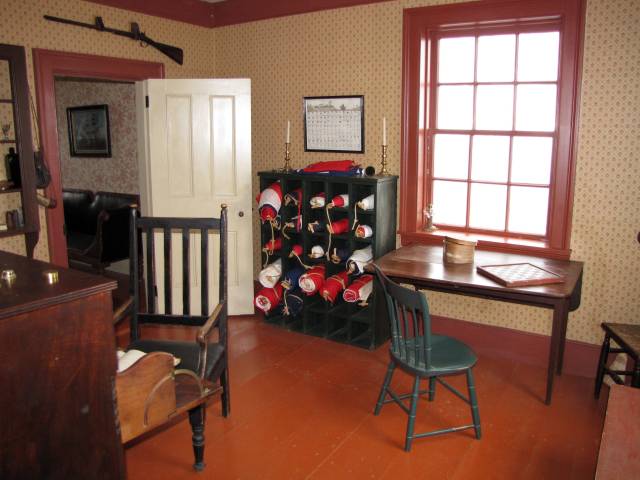 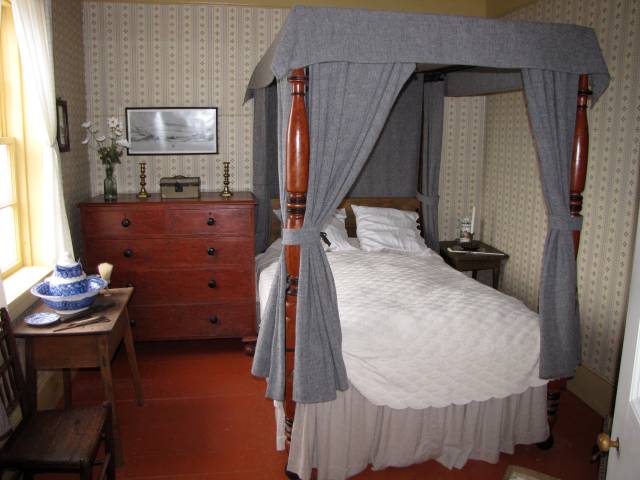 Mélanie decides to drop down to the shoreline trail, while I hike off trail, on higher ground, straight down to the end of the cape.  There is an opportunity to wave periodically. 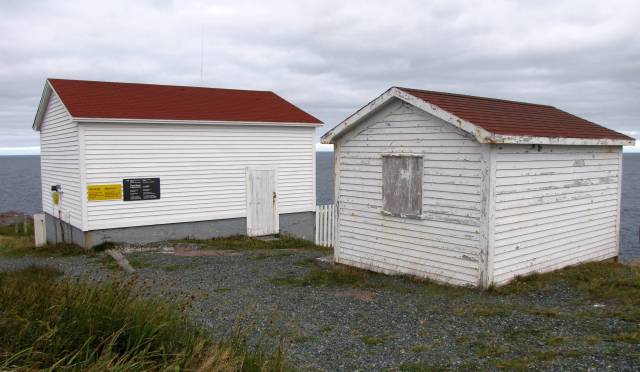 Intriguing and large, concrete structures begin to appear below on the right.  Mélanie is hiking among them. 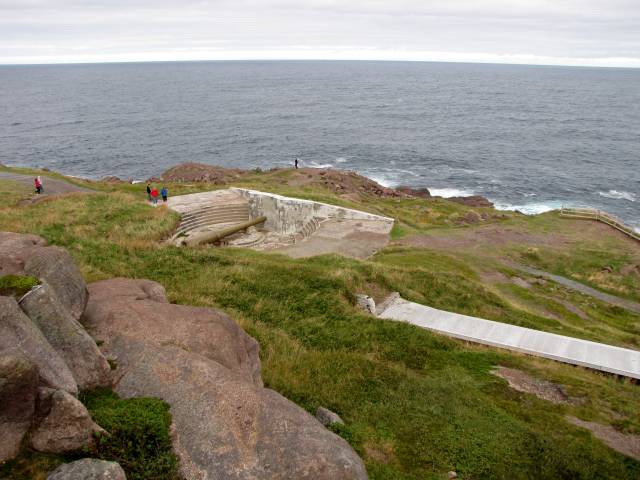 The large, dormant, World War II cannons lay inside their bunkers without the mechanisms which raised them for battle and lowered them for concealment.

What appeared to be concrete walkways from above are the roofs of underground tunnels connecting large dormitories and administration structures.

During service they would have been covered with grass to conceal their location from air surveillance. 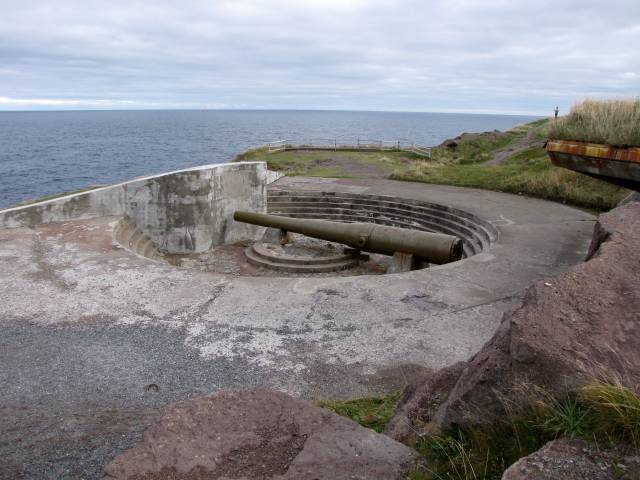 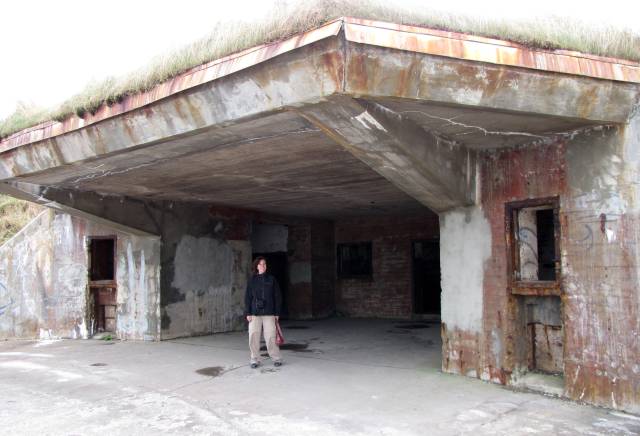 Cape Spear military personnel and the weapons of World War II would be well concealed until required for battle. 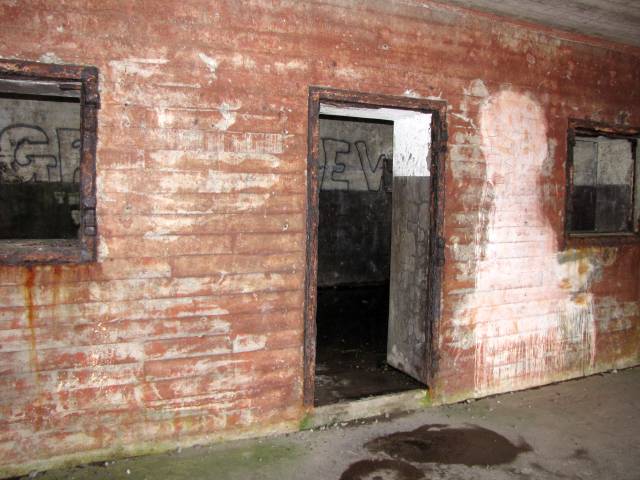 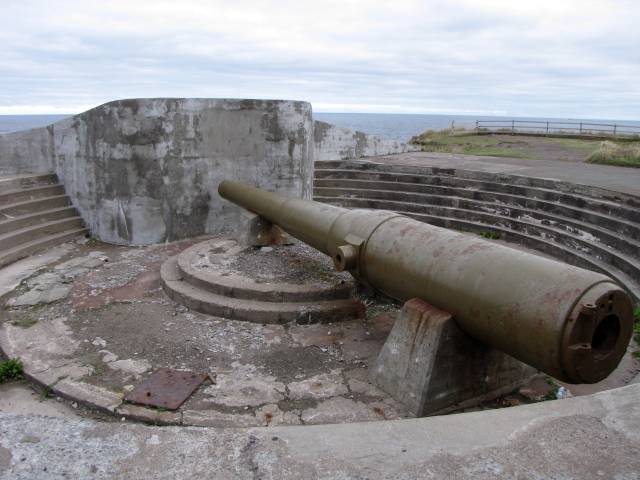 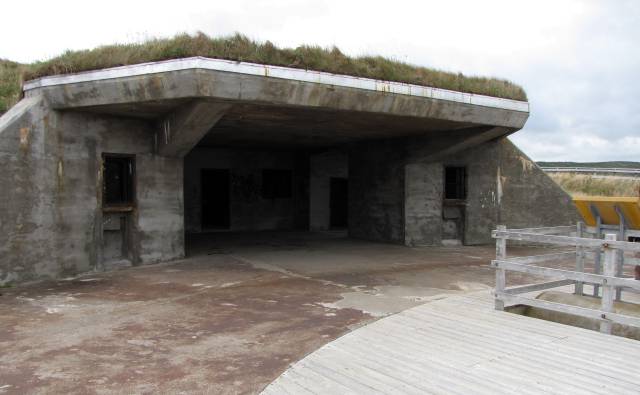 The eastern edge of Cape Spear, and of Canada, can be a forbidding place.  The exposed location is very beautiful in its austerity but we are here in calm seas with gentle breeze.

Wind driven waves on a high tide would create an entirely different scene and there is the potential likelihood that anyone standing where we are now would run the risk of being swept out to sea.  Today, the sight and sound of pounding surf is mesmerizing. 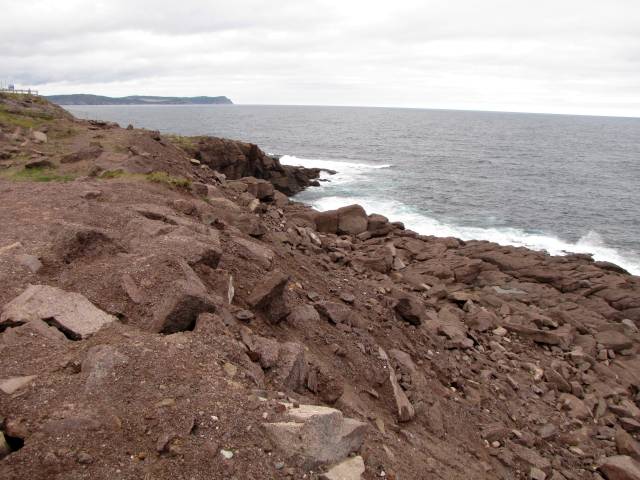 Signal Hill, above St. John's, is visible in the distance to the north.

At the viewing platform, representing the most easterly point in Canada, there is a cross hosting the names of lives lost here, engraved in mosaic and difficult to read, but it adds a sobering dimension to a very beautiful, fair weather place.

Mélanie and I are fortunate to visit here in late summer when the weather, although unpredictable and often changing, has been very good in comparison to what it can be.  We will leave Newfoundland a couple of days before Hurricane Leslie, which is moving north on the Atlantic Ocean, will strike the coast of Newfoundland.

On the walk back to the car, a single tree reminds us of how fortunate we have been.  Newfoundlanders are a hardy bunch and persevere through harsh weather which varies widely throughout the seasons.

We see these windswept, one-way-facing trees while driving close to the Newfoundland coastline.  They look the same as trees in the Rocky Mountains of Alberta, at high altitude with wind-exposed slopes and ridges.  But no-one lives there. 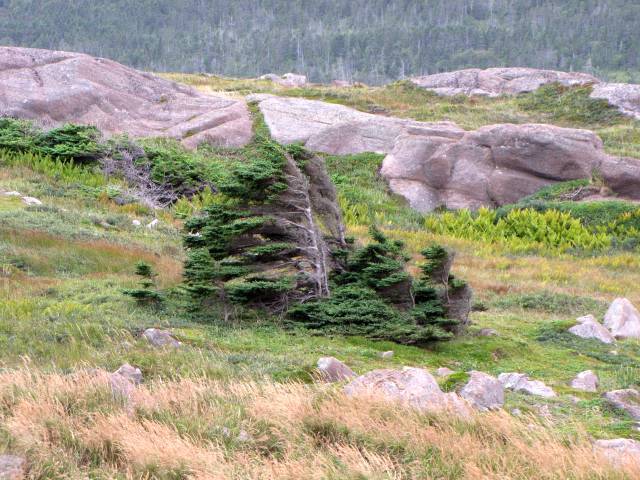 All that remains for this day is the 16 KM (10 mile) drive back to St. John's for dinner.  Although, there was a road sign for a turnoff into Blackhead - something about a church and school-house - 1879?