An opportunity near Fort Amherst to hike a short segment of the East Coast Trail in Newfoundland, Canada.

On the walk to the lighthouse and ruins at Fort Amherst, Mélanie and I pass an access to the East Coast Trail. 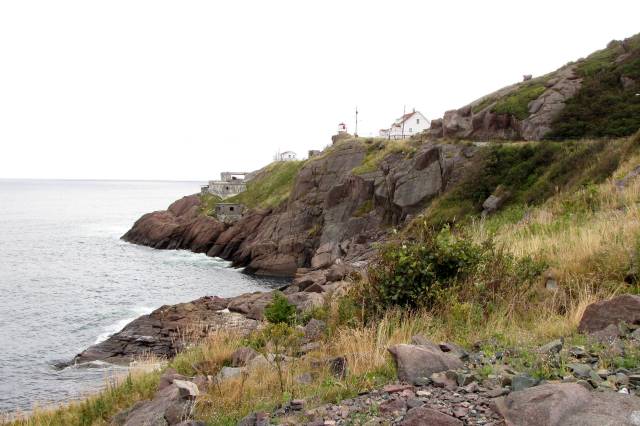 The view of Fort Amherst from the walk along the road. Access to the infamous East Coast Trail is also on this road.

On the return from Fort Amherst the decision is made to hike part of the 230 KM (144 mile) East Coast Trail.

The commitment on this day will be about the first 3 KM (1⅞ miles) on Section 1 of 19.  This short hike will be on the Deadman's Bay Path which travels 10.6 KM (6⅝ miles) between Fort Amherst and Blackhead. 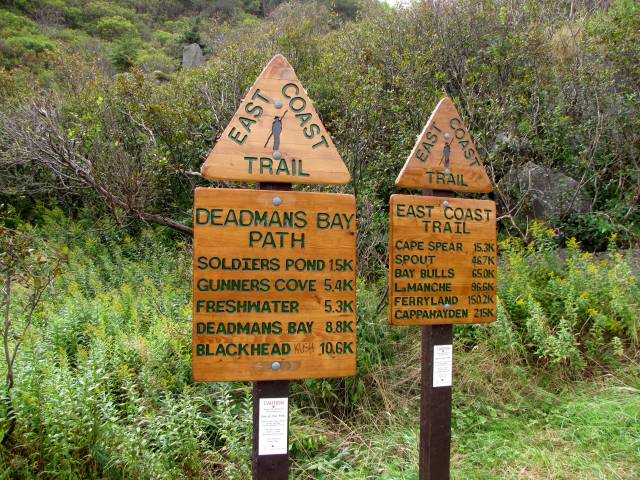 Although this hike must be brief to allow time for the later afternoon trip to Cape Spear, it is quite exciting to have the unexpected opportunity. 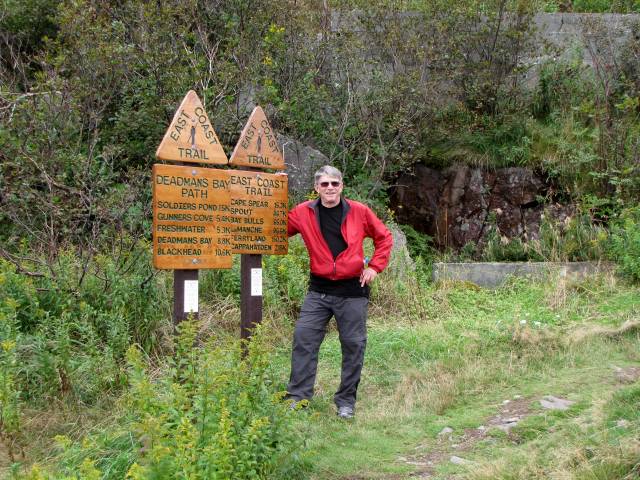 At the beginning of Deadman's Bay Path, within a few feet of the trail-head, there is a single, rectangular, concrete pillar whose purpose is unknown, however, the reason will soon become clear. 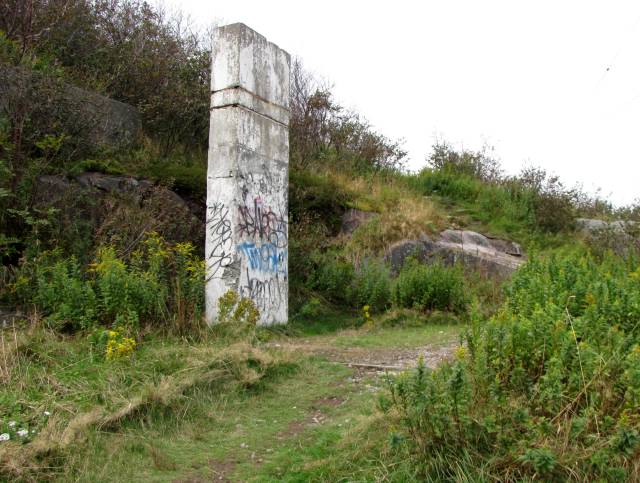 Immediately, it becomes apparent this section of the trail will contain an uphill exercise as the hike proceeds to the top of a ridge high above.

At the beginning some trail sections are on wooden log stairs and others are on a rocky creek bed.

Within a kilometer (⅝ mile) the hike proceeds around a large, square concrete structure which, from the back, appears to be a reservoir for storing water from the creek bed beside.

Eureka!  The concrete pillar near the trail-head supported a wooden duct or metal pipe to supply water to troops at Fort Amherst. 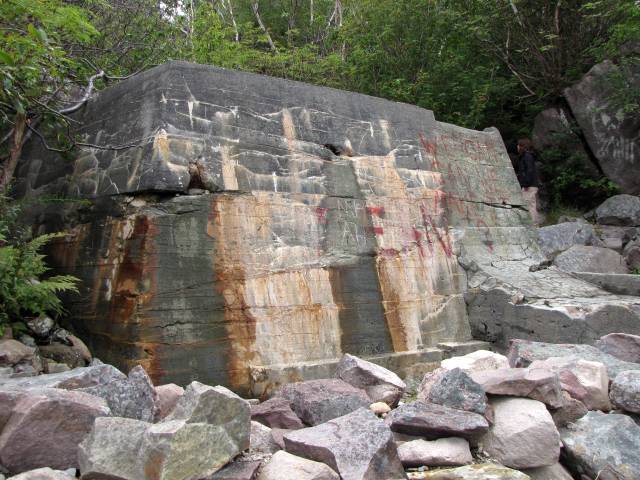 The front of the concrete structure as altitude increases on Deadman's Bay Path,  East Coast Trail at Fort Amherst.

The back shows the structure is a very old concrete vat to hold water from the creek which will eventually flow to Fort Amherst below.

As elevation gain eases, the hike proceeds past pristine meadows into forested areas which approach the top of the ridge where rock formations are vaguely reminiscent of miniature versions of Yosemite National Park's granite domes. 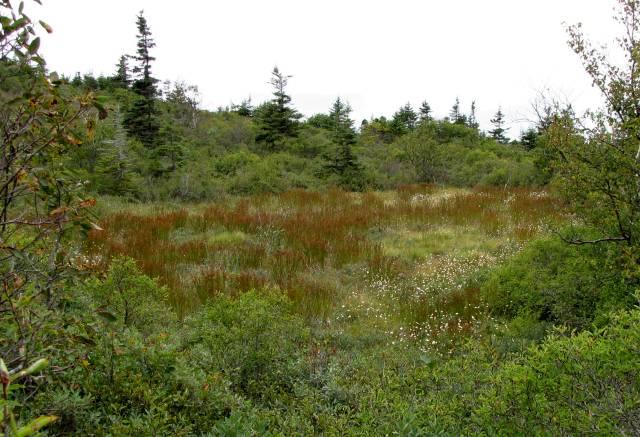 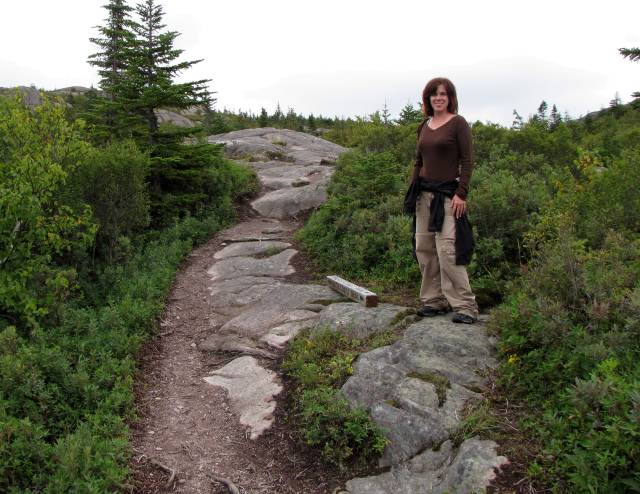 Magnificent views of the coastline and the ocean begin to unfold.  There is a storm down the coast, in the far distance, but skies overhead are simply overcast. 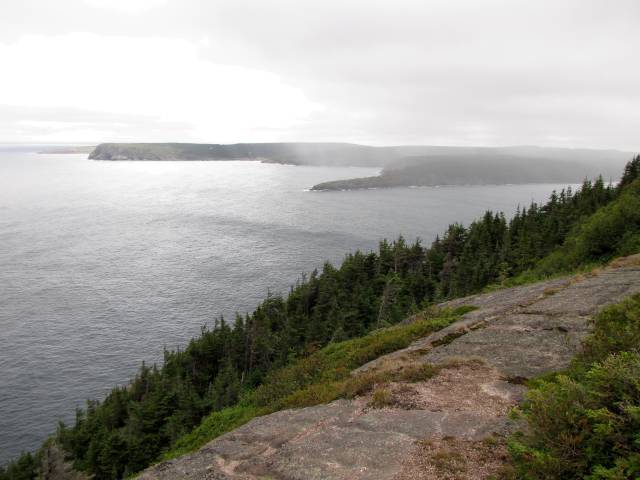 As the hike makes the short, final, altitude gains to the top of the ridge, the beauty of Freshwater Bay unfolds ahead and beneath this elevated position.

The dividing barachois is clearly visible between Freshwater Bay and Freshwater Pond.  The next bay over is Deadman's Bay. 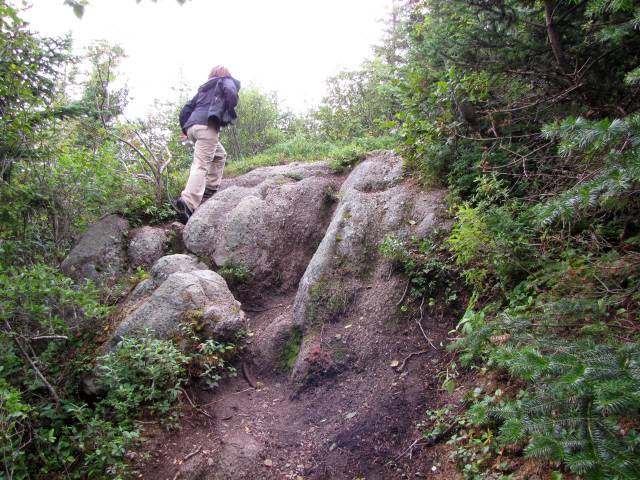 From the top of the ridge, Freshwater Bay is directly below us with Freshwater Pond at the far end.

St. John's is visible in the far distance.  Mel is sucking up blueberries like it is the world's last crop.  My suggestion she leave a few for other people falls on deaf ears.

I have seen bears that could not strip berries off bushes so efficiently.  Bears are not a big issue here.  There are a lot of moose. 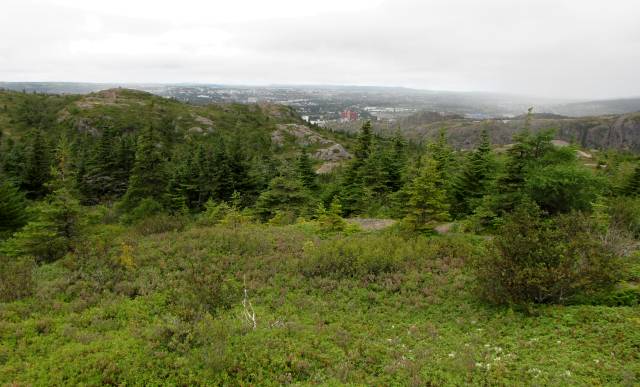 There is a lake below us and it is compelling to off-trail to the edge. 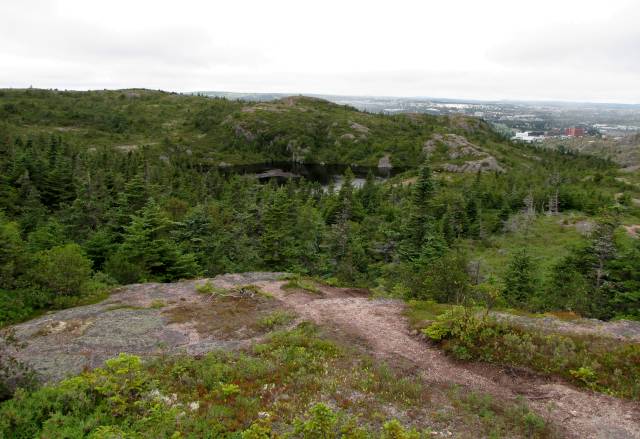 Cabot Tower on top of Signal Hill hovering over St. John's is visible in the far distance. The impression of granite domes is undeniable.

The lake called Soldier's Pond is created by an old concrete dam which does not appear to be all that secure but undoubtedly it is monitored. 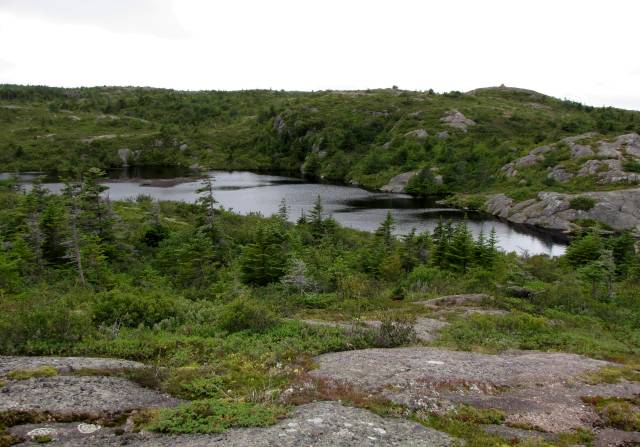 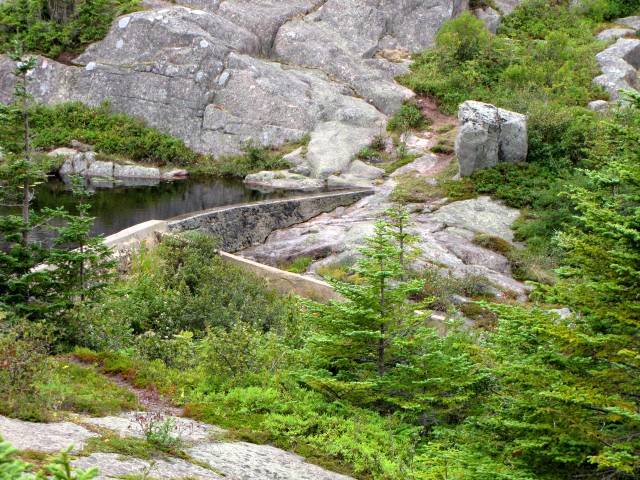 Soldier's Pond, off to the side of the East Coast Trail, is held back by an old concrete dam.  A water supply to Fort Amherst.

Towards the bottom of the return hike, there is a better view of the concrete storage vault to regulate the flow of water from Soldier's Pond which also becomes an excellent foreground to the view over the Narrows and the base of Signal Hill. 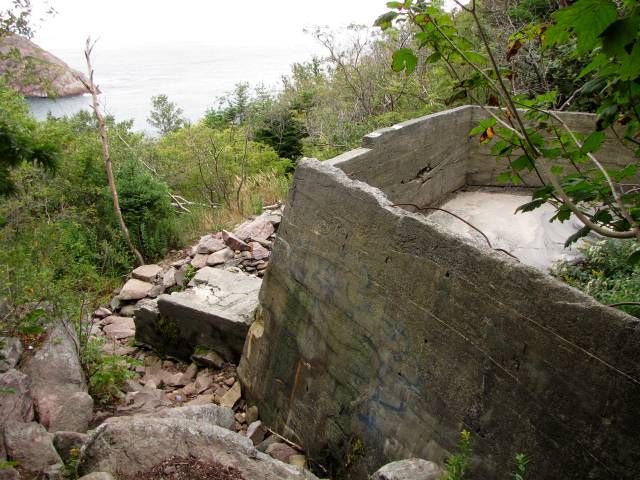 The Canadian East Coast Trail is a 230 KM (144 miles) long wilderness hiking experience combined with visits to 30 historic Newfoundland communities along the east shore of the Avalon Peninsula.

There are 18 trail segments, plus one on the north side of Signal Hill in St. John's called the 8.9 KM (5⅜ miles) Sugarloaf Path connecting Logy Bay with Quidi Vidi Village.

Additionally, there are well-prepared meals at local restaurants and comfortable bed and breakfasts along the way.

On the return walk along Southside Road to the parking area, the road passes Frederick's Cove and the slim remains of historic Frederick's Battery.

The next stop is further down the coast for a walking tour of Cape Spear which hosts Canada's most easterly point, a historic World War II military installation and Newfoundland's oldest surviving Lighthouse (ca. 1835).

The drive to Cape Spear passes along coves surrounded by fishing villages so pristine they appear too perfect to be real.  There is an exemplary prevailing pride in each community.  The two photos below feature one of these picturesque villages. 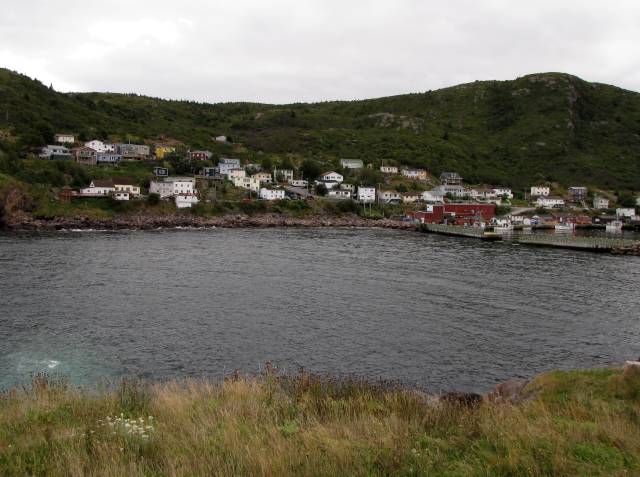 This day is fascinating and on the way to Cape Spear there is no premonition the challenge of the day will be dinner at the end of this action packed day.