Fort Amherst below Signal Hill at the Narrows in St, John's, Newfoundland.

From Cabot Tower at the top of Signal Hill, Fort Amherst beckons from far below near sea level on the opposite side of the Narrows. 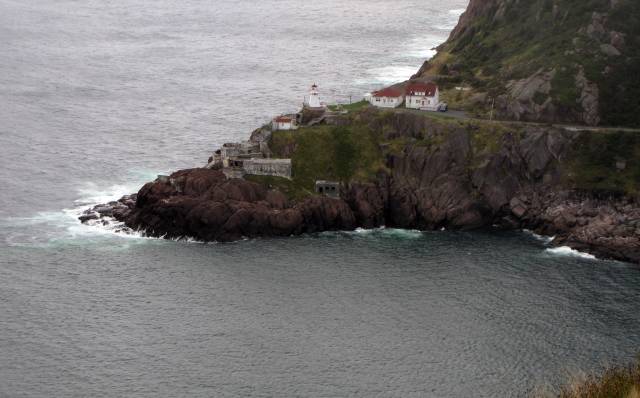 Fort Amherst - on a prominent point called South Head below Signal Hill, on the opposite side of the Narrows into St. John's Harbour, St. John's, Newfoundland, Canada.

Curiosity has been aroused to the point where pursuit of investigating the remains of Fort Amherst can no longer be delayed.  A brief stop in St. John's for cold beverages provides Mélanie the opportunity to pursue hidden treasure at a yard sale.

The drive around St. John's Harbour takes Water Street past Victoria Park, a left turn over the bridge and Southside Road east past a mix of residential and commercial property, then beneath the stone quarry cliffs and a plethora of seafaring vessels to a small parking area. 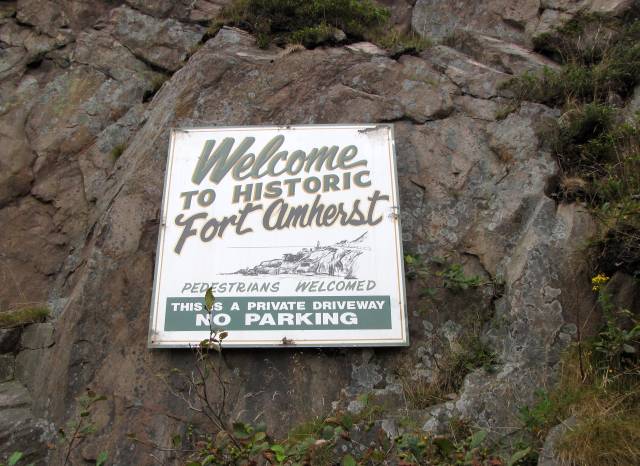 The walk on the road continues through an old, but established, residential area hanging from the hill above.

On the harbor side, the first discovery is the sparse remnant of Frederick's Battery tucked into a picturesque cove and documented with a historical placard. 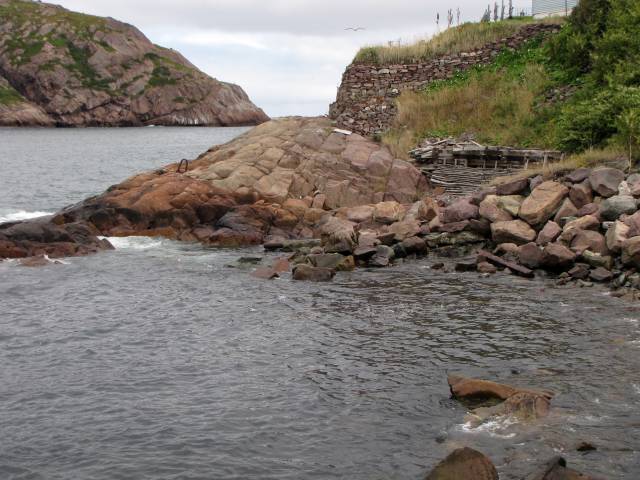 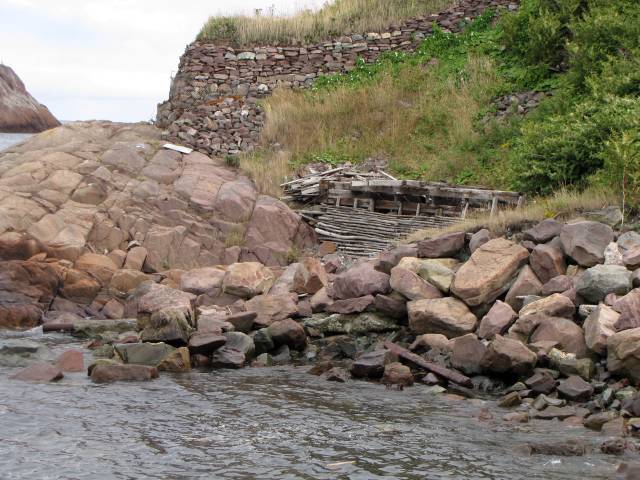 Further along, the road passes hiking trail access to the East Coast Trail on the way to Fort Amherst. 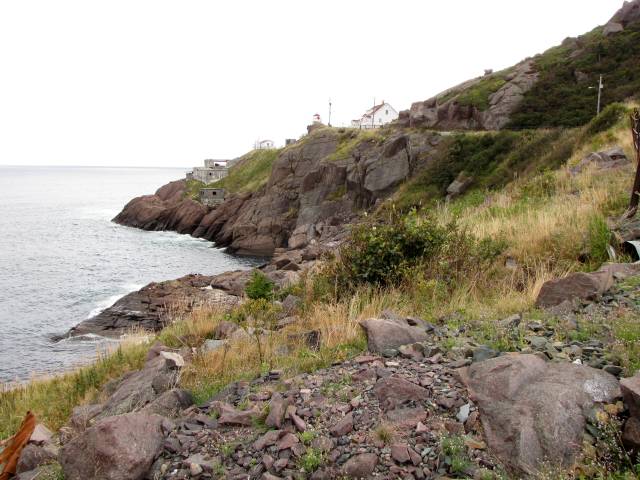 Fort Amherst is a National Historic Site, recognized on May 30, 1951.  There is little remaining of the original structures on South Head which date back to 1777.

Near the current lighthouse, a Historic Sites and Monuments Board of Canada plaque provides a brief description of the existence for the original Fort Amherst. 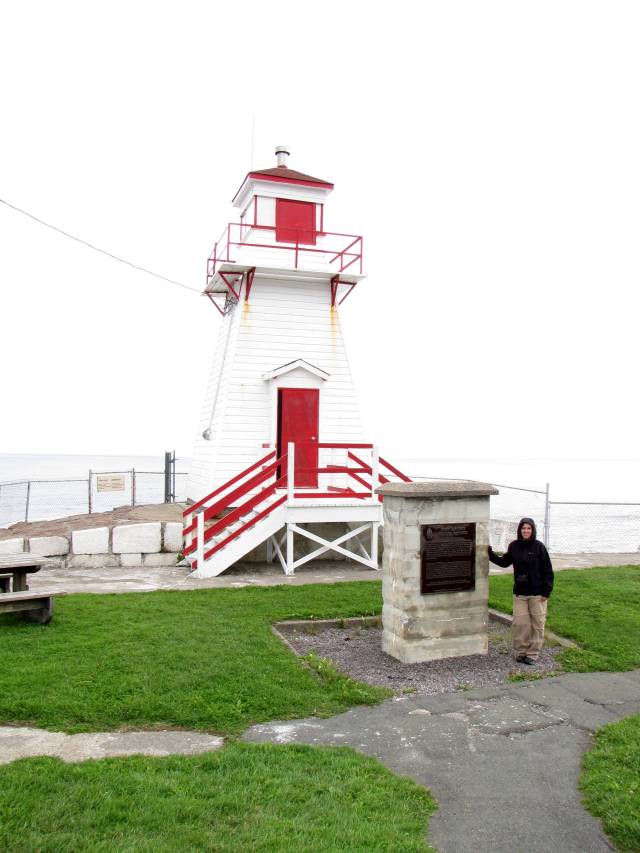 Stairs descend beside the current lighthouse, built in 1951, to investigate the decaying concrete structures which served as defense during both World Wars.

The area is fenced to protect people from injury but we are able to find a way to tour the old ruins safely.

A stiff, fresh, salt air breeze is blowing towards us from the Atlantic Ocean and multiple blues and greens create dynamically changing turquoise highlights in the white surf pounding rhythmically against rock below. 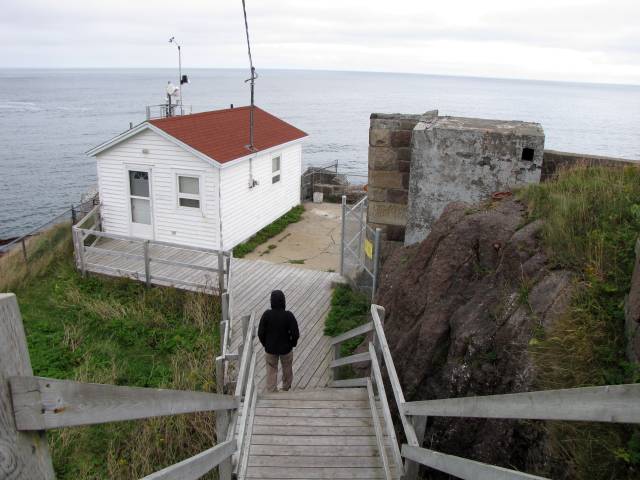 The concrete structures have sadly decayed into ruin.  Vandals have exacerbated the disarray but looking past that, there is a sense of the power this fortification once commanded over the entrance to St. John's Harbour.  The barrels of large cannons lie silent in piles of debris.
Following photographs will provide a summary of the views of and from the decaying concrete military structures built for the first and primarily second World Wars.
It is important to remember Newfoundland was British for the duration of the Second World War and did not become part of Canada until 1949. 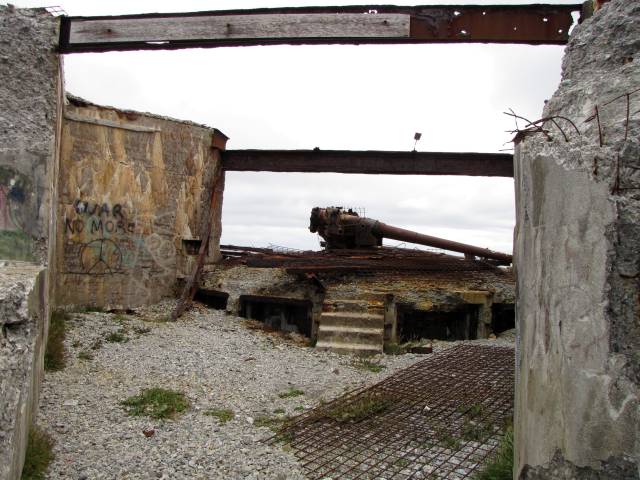 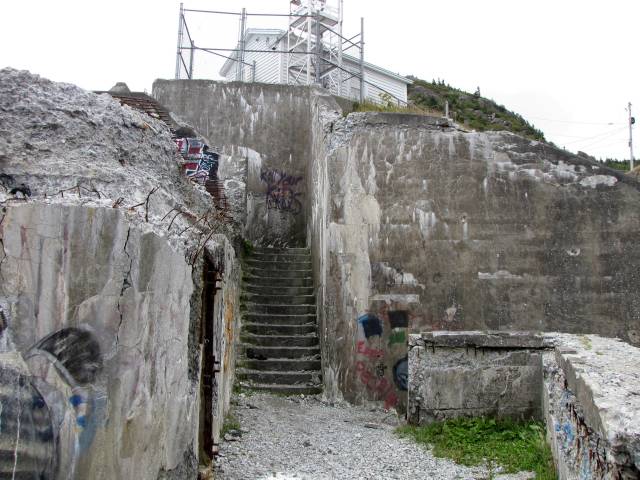 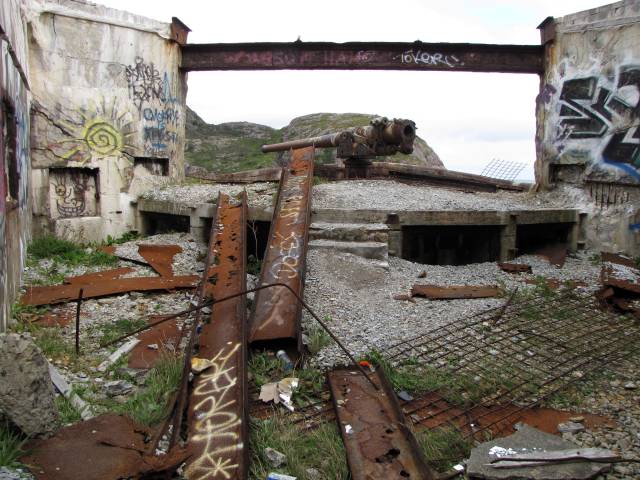 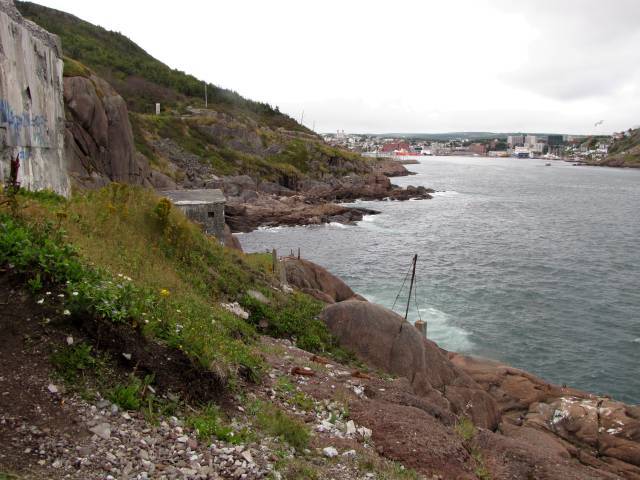 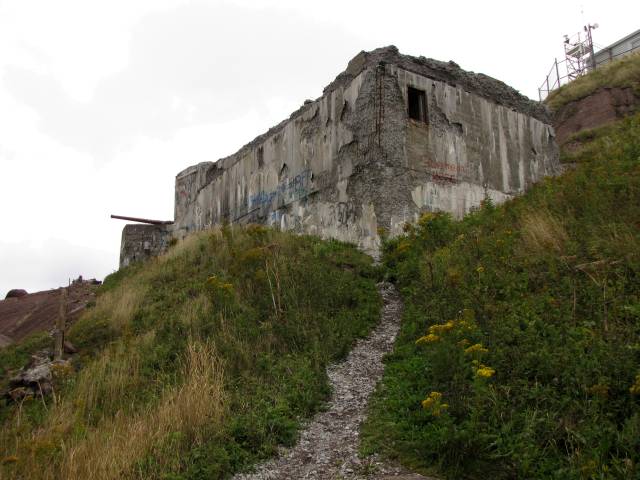 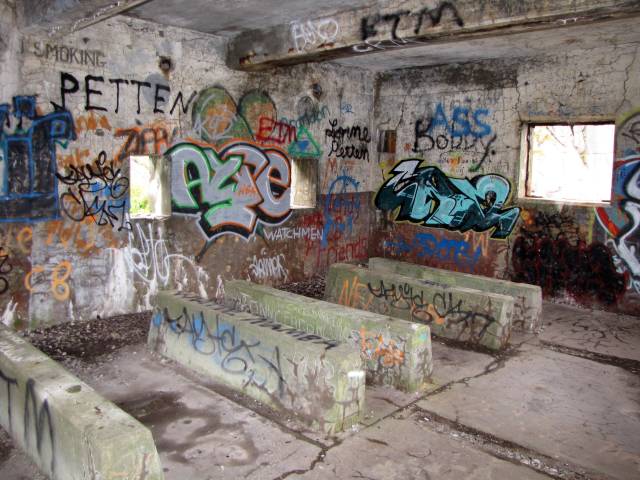 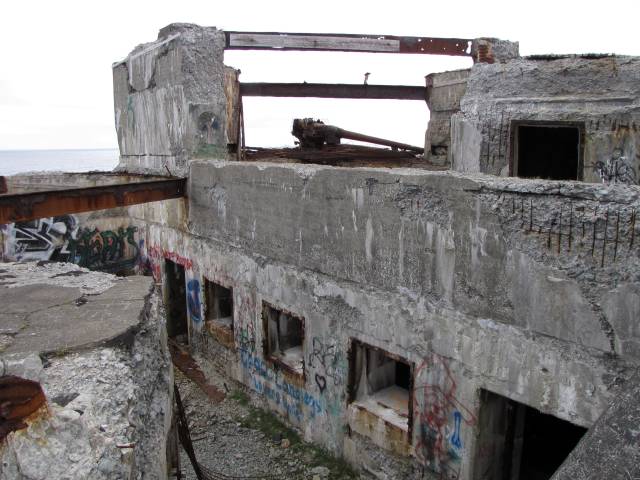 On the ocean side of South Head, the rotting remains of concrete gun turrets are visible over fenced and steep cliffs far below the lighthouse. 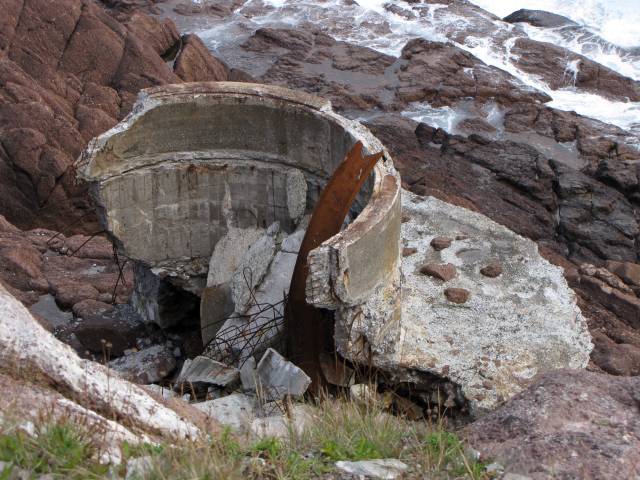 On the other side of the Narrows, Signal Hill soars from the edge of the narrow channel into St. John's Harbour.  Cabot Tower looks tiny from this vantage point far below near sea level. 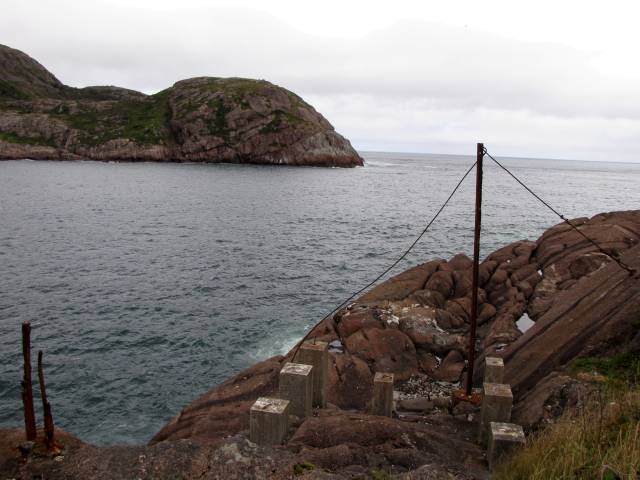 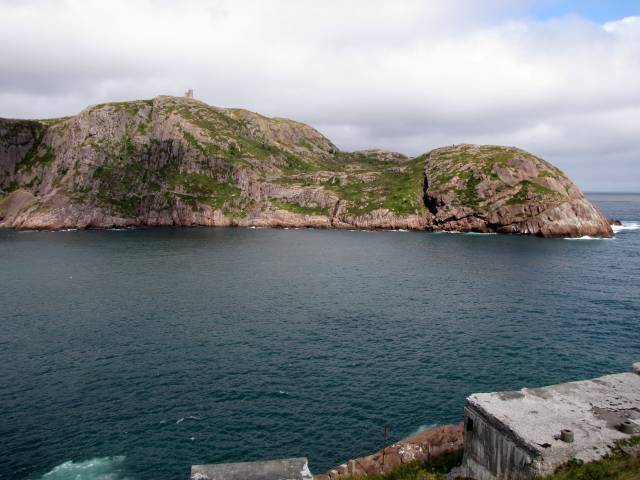 Mélanie and I climb the stairs to the 1951 lighthouse and, on the way, pass a winch, installed in 1950 and powered by a 5 HP Acadia engine.  Combined with cable and pulleys, the winch hauled construction supplies for the present lighthouse which began operation a year later.

Subsequently the winch was used to lift supplies from shoreline for the lighthouse and the Keeper's home.  This motorized system replaced an old tramway and trolley which hauled supplies up from shoreline using a manually operated winch. 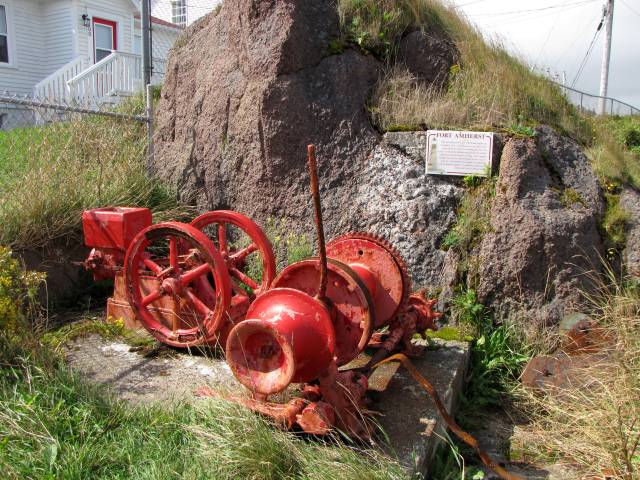 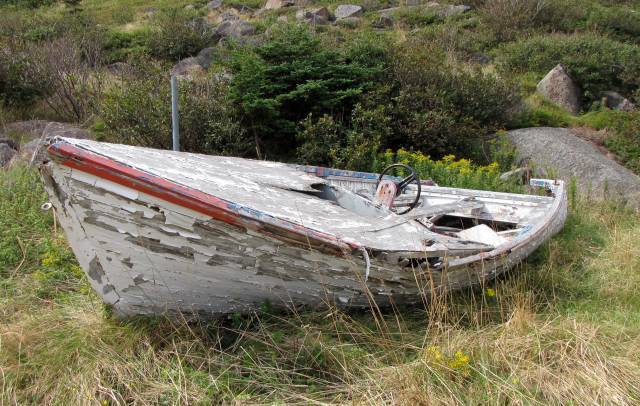 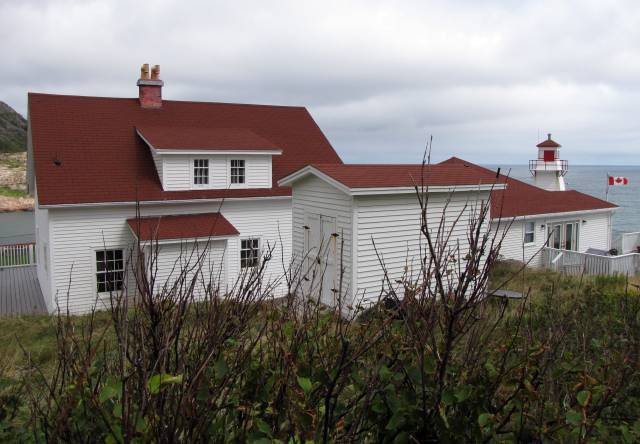 Looking out at the Atlantic Ocean from the rear of the Keeper's House at Fort Amherst, St. John's, Newfoundland, Canada

On the walk back along the road to the car, Mélanie and I decide to tackle hiking a short distance on the East Coast Trail.

There are virtually endless recreational opportunities.  Life is too short.