Cabot Tower atop Signal Hill was the primary lookout for attack on St. John's, Newfoundland, Canada.

Signal Hill rises abruptly above the Narrows that separate St. John's Harbour from the Atlantic Ocean.  First known as the Lookout, Signal Hill has been used for communication, observation and defense since 1704.  The iconic hill was designated as a National Historic Site in 1958.

Mélanie and I take advantage of the complementary continental breakfast at the hotel before driving across downtown for the ascent up Signal Hill Road to the parking lot near Cabot Tower which was constructed in 1897 to honor Queen Victoria's Diamond Jubilee and the 400th anniversary of John Cabot's discovery of Newfoundland in 1497.

The Imperial Powder Magazine (1796) stands in the foreground of the access to Cabot Tower (1897) on Signal Hill.

The paved path from the parking area passes the Imperial Powder Magazine built in 1796.  There are magnificent views from the top of Signal Hill to Fort Amherst far below near ocean level on the opposite side of the Narrows.

The entrance to Cabot Tower, on the Narrows side of the building, is guarded by a stubby cannon on the wooden entrance deck.

The heavy wooden door leads to the interesting and unique ground floor gift shop.  Stairs spiral lead to a variety of historical exhibits and, at the top, the flag room displays an array of colorful flags, neatly folded and tucked into wall-cabinet cubicles.

Flags would be hoisted on masts above the tower to notify St. John's merchants and the general population of changing weather and seafaring traffic.  The observation point information allowed the citizenry, or military defense advance notice for preparation. 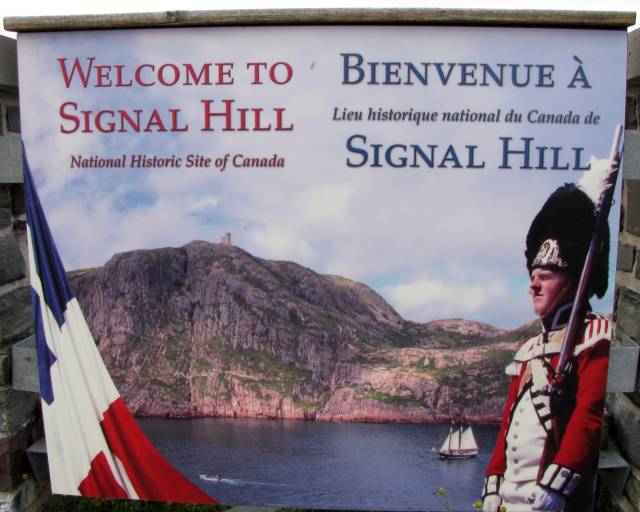 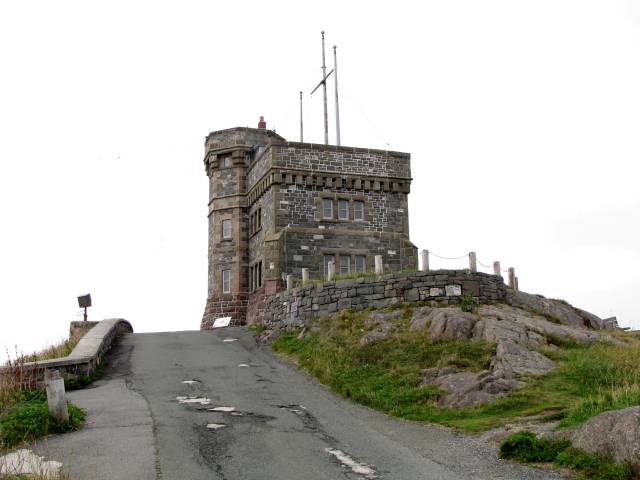 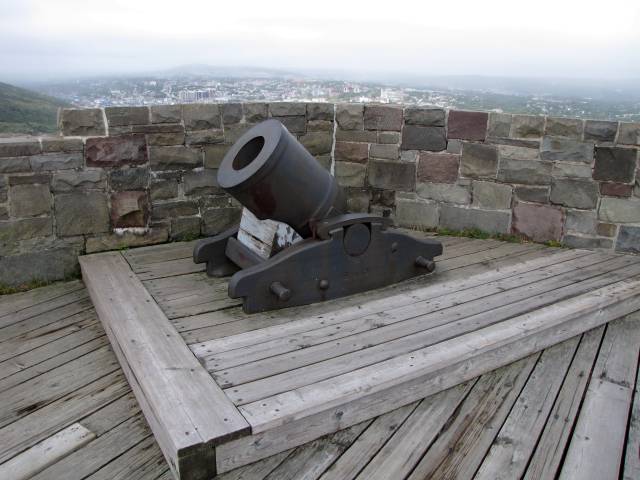 The stubby cannon on the deck at the entrance to Cabot Tower on Signal Hill above St. John's, Newfoundland.

Guglielmo Marconi made history here when he received the first radio signal from across the Atlantic Ocean at Signal Hill on December 12, 1901.

He became a Nobel Prize Winner in 1909 for his pioneer work in radio signal transmission. 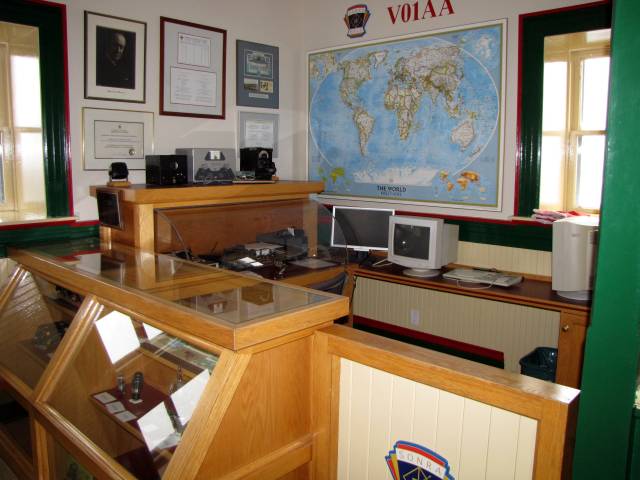 The communications exhibit inside Cabot Tower hosts many generations of equipment and is still a functioning amateur radio station.  Call letters are on the wall above the map of the world. 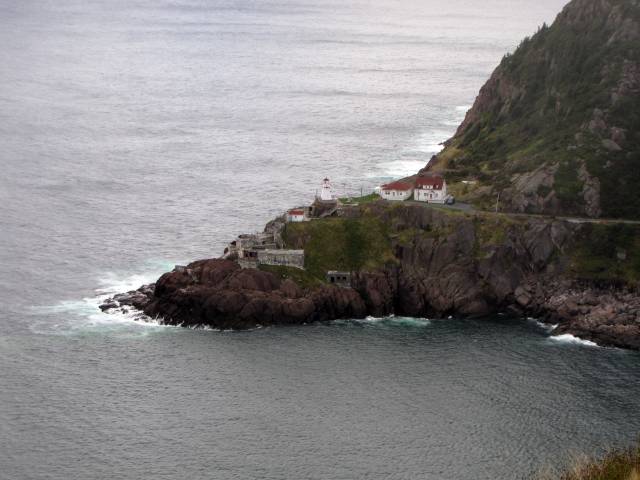 The lighthouse at Fort Amherst below and on the opposite side of the Narrows is clearly visible from Cabot Tower on Signal Hill.

Following the self-conducted tour of the inside of Cabot Tower, attention is immediately drawn to the cannons below at Queen's Battery and the incredible views over St. John's Harbour and the city of St. John's.

Weather is fickle, alternating between drizzle and sun.  Sunny spots drifting across the landscape highlight ground features in their path and make for interesting photographic opportunities.

Well constructed and maintained pathways alternating on pavement, boardwalk and gravel transfer us from Cabot Tower, around and down to the Queen's Battery below. 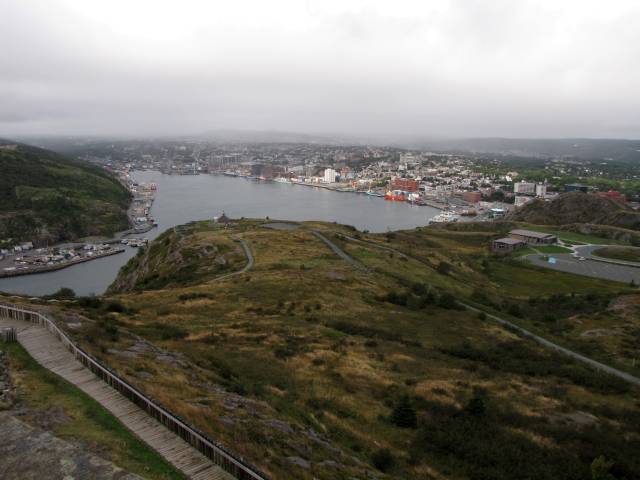 The speck of Queen's Battery above St. John's Harbour and St. John's as viewed from Cabot Tower at the top of Signal Hill. 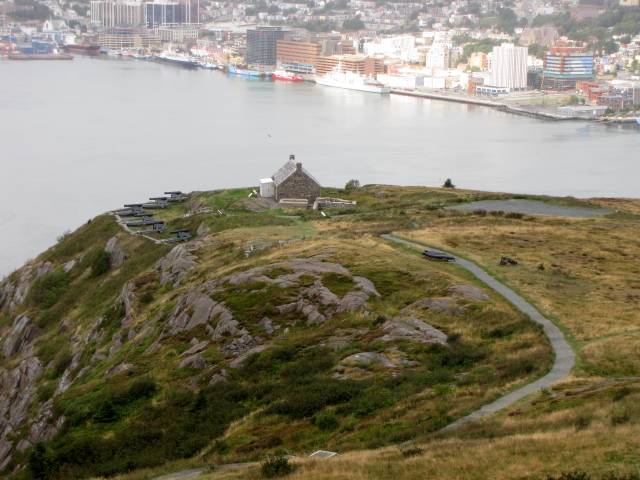 A telephoto lens view of Queen's Battery taken from Cabot Tower at the top of Signal Hill above St. John's. 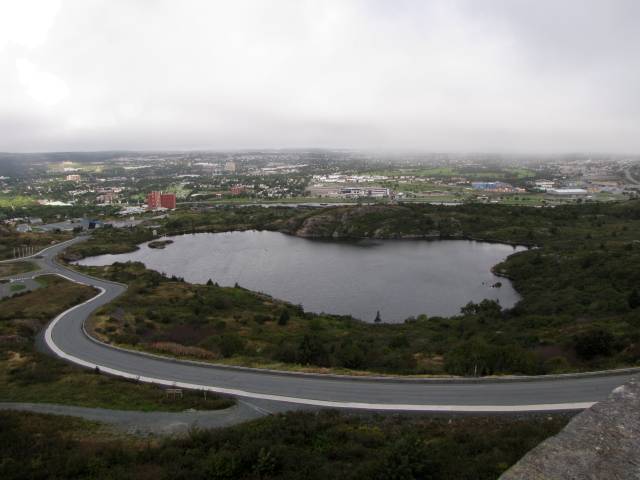 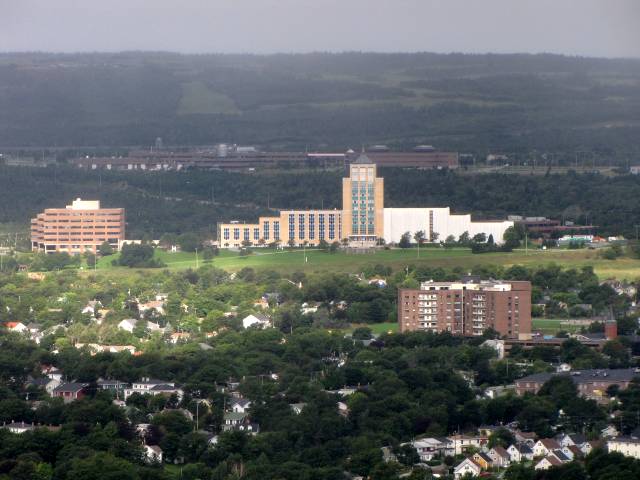 Sunny spots accentuate specific areas of St. John's and highlight them in the surrounding gloomy areas of light rain. 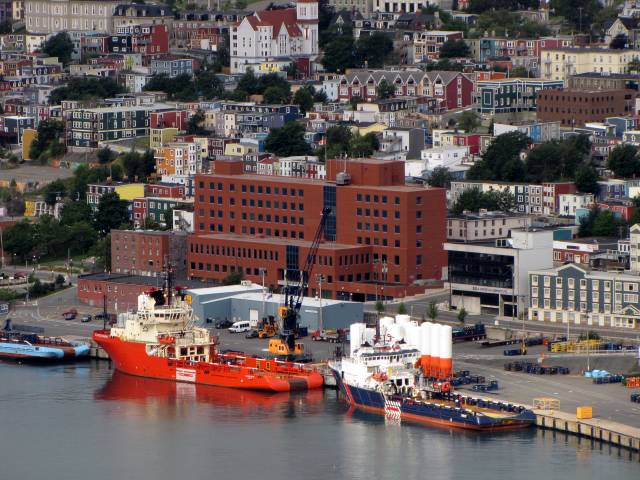 A long lens view of the big orange supply ship, which services Hibernia, docked in front of the Courtyard Marriott in St. John's, Newfoundland.

It seems unfair I am not allowed to sit on the cannons. 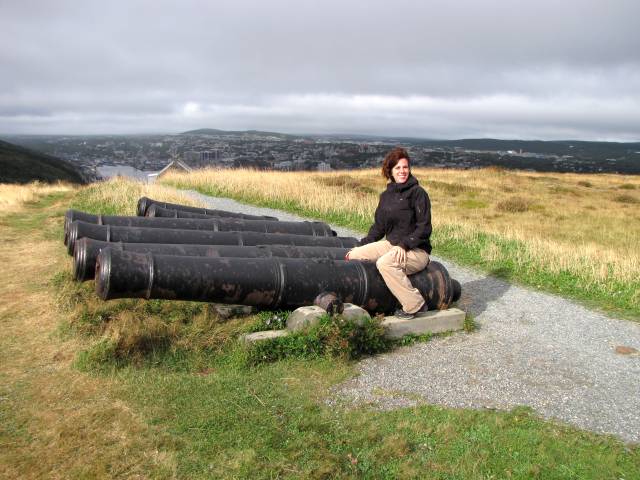 Mélanie gets to sit on the cannon along the trail from Cabot Tower to the Queen's Battery.

People must understand: I am not always above retaliation.

Mélanie and I arrive at the Queen's Battery to tour the protective tunnels surrounding the old stone barracks and ammunition storage structures.

Numerous cannons on turrets, point like fingers towards vulnerable directions and are quite capable of defending a large area surrounding Signal Hill. 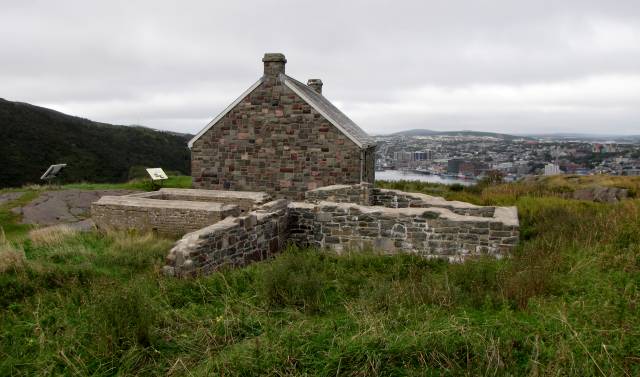 Stone tunnels would help to protect riflemen from enemy fire.   St. John's is in the far distance. 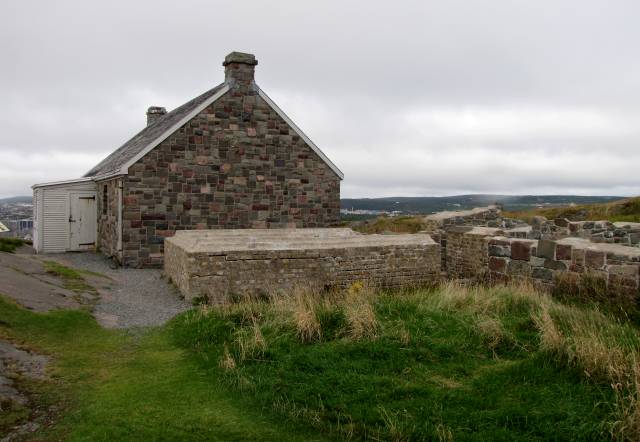 One of the old barracks buildings has been restored and preserved. Very few of the major structures which occupied Signal Hill have survived. 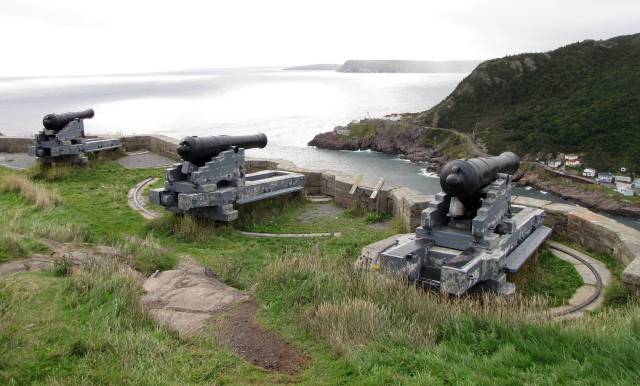 A cannon view from Queen's Barracks across the Narrows. In the far distance Cape Spear appears beyond Fort Amherst below. 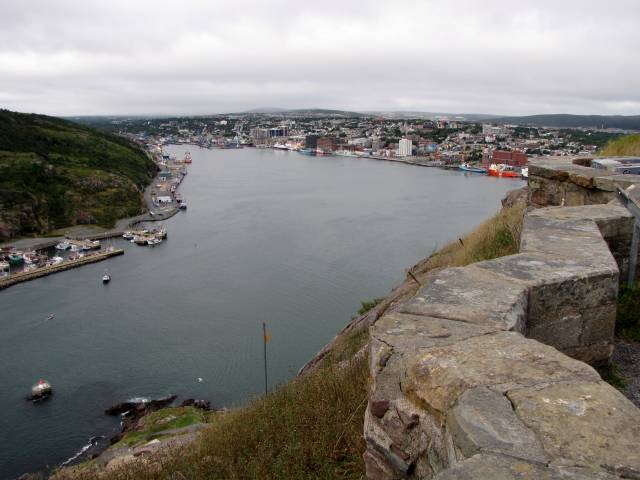 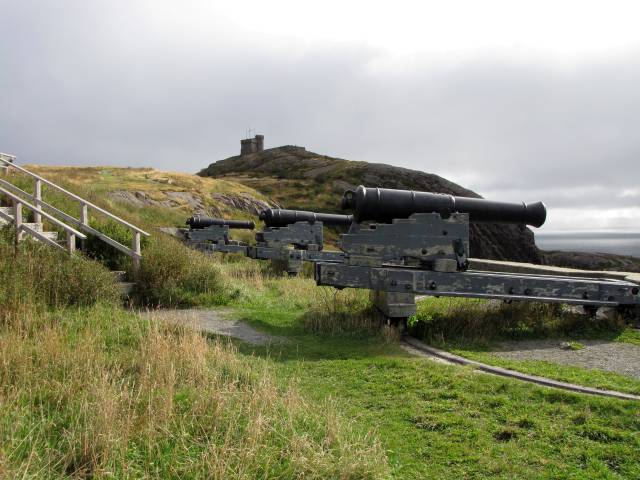 Cabot Tower at the top of Signal Hill from the cannons at Queen's Battery. 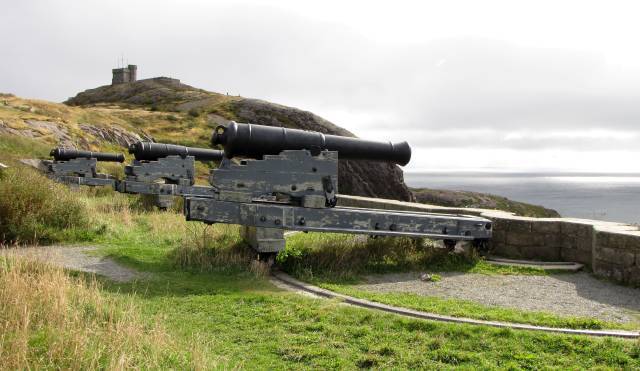 From Queen's Battery, Mélanie and I take a trail which initially provides an excellent view of Ross's Valley above the Narrows where ocean surf crashes turquoise and white against the 500 million year old coastal shoreline below Cabot Tower.

There are a substantial number of hiking opportunities in this immediate area. 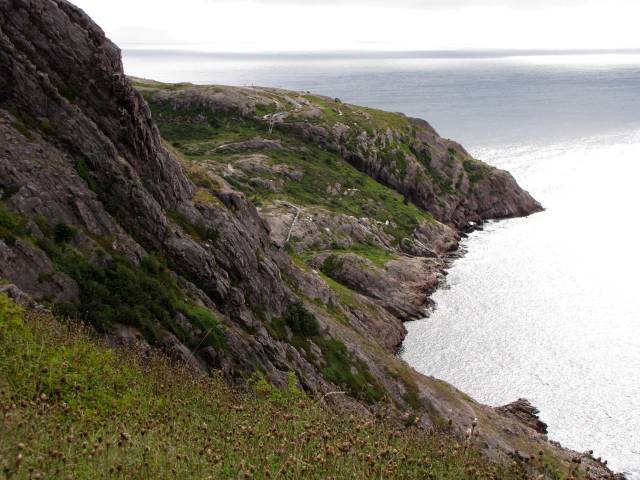 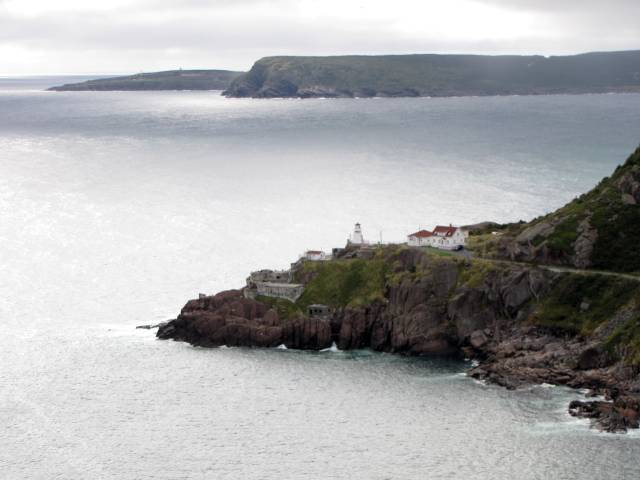 The lighthouse at Fort Amherst on the other side of the Narrows serves as foreground to the lighthouse on Cape Spear further south on the Newfoundland coast line.    Cape Spear is the most easterly point in Canada.

We walk on trail below Cabot Tower and a short distance up Signal Hill Road before crossing to Ladies' Lookout for another set of spectacular views towards Cuckold's Cove and Quidi Vidi Village.

The horizon is consumed by the expanse of the Atlantic Ocean and a slight ocean breeze is accompanied by the endless and relaxing rhythm of surf pounding on rock below us.  Ladies' Lookout is of specific historical significance.

From Queen's Battery, crossing below Cabot Tower to walk up Signal Hill Road for the climb onto Ladies' Lookout.

The information placard at the top of Ladies' Lookout at Signal Hill above St. John's, Newfoundland. 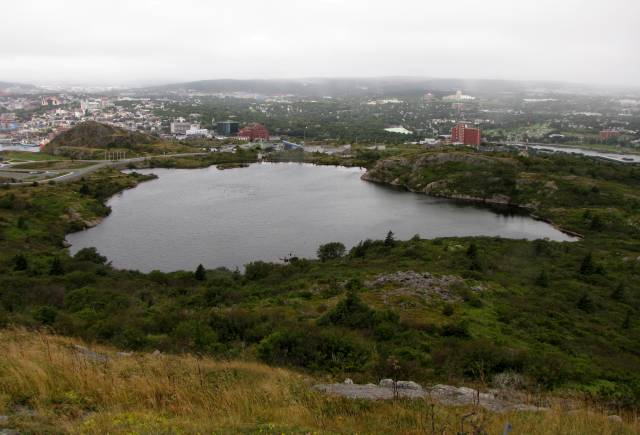 The view across George's Pond to St. John's from Ladies Lookout at Signal Hill.

The ocean air and views, augmented by 'The Rock' and combined with 500 years of often dramatic history, are a humbling experience.

The excitement of discovery is tempered by the ordeals and perseverance of the people who made this special place great under extremely challenging conditions and circumstances.

This day, life is further enriched on Signal Hill.