Shortly after leaving Cameron Lake for the drive east on Akamina Parkway to the Lineham trail-head, weather is noticeably improving for the afternoon hike along Lineham Creek into Lineham Falls.

The Lineham trail-head offers a nice view to the east, above the trees, of Ruby Ridge on the south flank of 2,910 m (9,547 ft) Mount Blakiston, the tallest mountain within Waterton Lakes National Park.

Along this trail there is another section of red-colored trail similar to the  Rowe Lakes Trail, one valley to the west.  Well-graded switchbacks ascend to a long grassy meadow leading to the dramatic and narrowing valley between 2,728 m (8,950 ft) Mount Lineham and massive Mount Blakiston.

Trail is bordered by lush vegetation and bushes loaded with ripe berries, before leveling and entering forest of old growth fir trees. 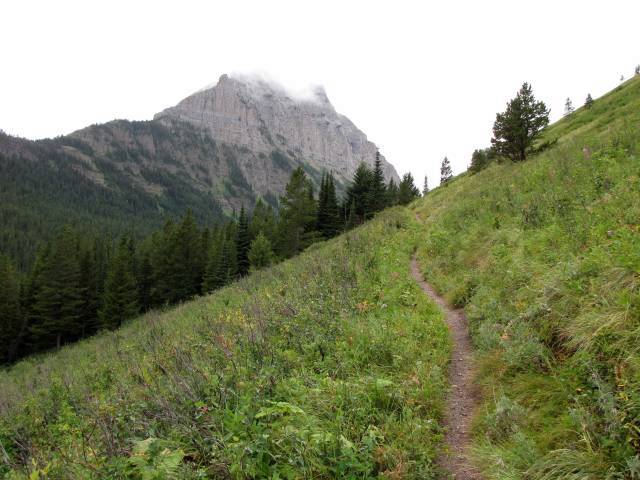 There is a brief view of Lineham Falls in the distance as Mount Lineham presents an increasingly dominant image to the left.  Cloud lingers against lofty peaks and pinnacles at higher elevations as the central valley tunnels under the mystical vision above.

Breaking out from forest again, a large, deep avalanche chute descending from Mount Blakiston creates a switchback descent across the drainage.  At the bottom, the trail is once again beside Lineham Creek.

Only a short distance further, after returning into forest, there is an obscure, short and steep path off to the left which descends to a beautiful white-water, cascading waterfall, tumbling over angular rock.

Climbing back up to the main trail and continuing towards Lineham Falls, within a short distance further, another sketchy, steep trail descends to the base of the same, small and picturesque waterfall.

Lineham Falls in the distance at the beginning of switchback descent into and across a large Mount Blakiston avalanche chute.

A small, but very beautiful cascading waterfall along Lineham Creek. Notice the clarity of the water and colors in the rocks. 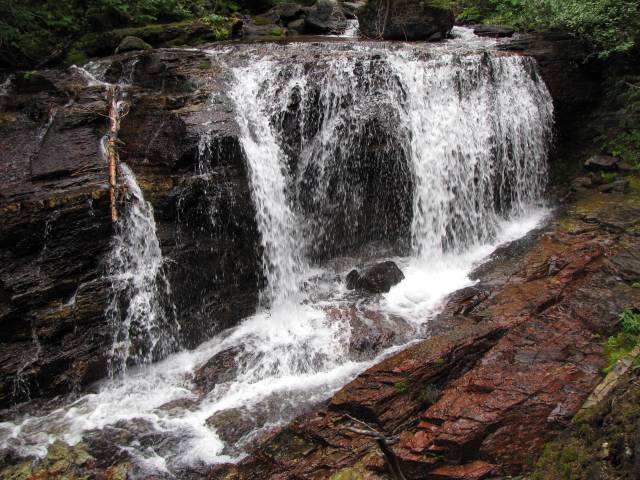 The sound of the crashing, cold water at the base of this cascading waterfall along Lineham Creek is intoxicating.

Within a short distance, the main trail breaks out of forest into views of Lineham Falls cascading 250 m (410 ft) down the headwall about a half kilometer (¹⁄₃ mile) ahead.  There is a Trails End (Fin du Sentier) sign a short distance further.

The Lineham Creek waterfall is sourced by the colorful, pristine, alpine Lineham Lakes from the bowl above, beneath Lineham Ridge.

There is a clear and present image of those awe-inspiring lakes from the recent hike on the Rowe Lakes Trail to the top of Lineham Ridge for the breathtaking view below.

Many years ago, an aggressive, chain assisted, and questionable route was available up the Lineham Falls headwall.  The chains were removed long ago as too dangerous, given the unstable nature of the headwall rock.

It was simply too risky, with potential for serious injury to access the Lineham Lakes via the Lineham Creek Falls headwall route.

Continuing off trail to the base of the impressive Lineham Falls is very tempting but  the time is instead allocated to taking a few photographs, enjoying lunch and making a short climb to a nearby high point for a better view of the impressive surrounding spectacle.

There is no-one else here and the silent, white noise of nature is deafening.

The summit of Mount Blakiston, far above is completely masked by cloud. 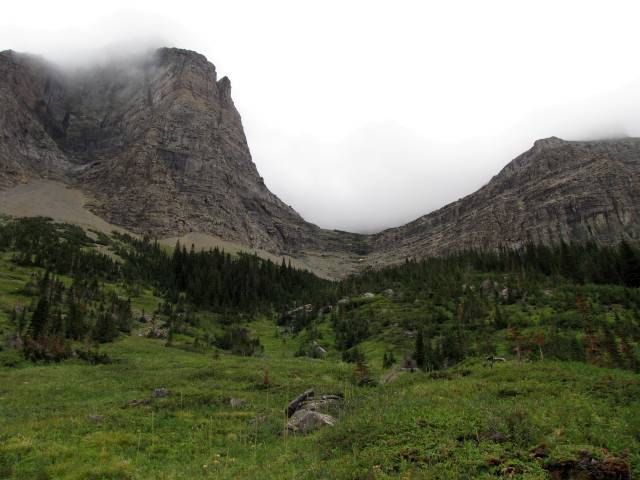 Following the pleasant and relaxing break, the return hike proceeds via the same route taken in.

Buchanan Ridge fills the end of the Lineham Creek valley on the hike east between Mount Blakiston and Mount Lineham towards the trail-head. 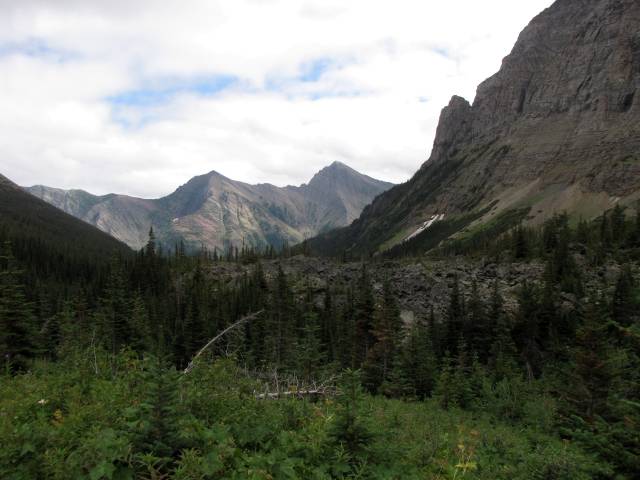 The view from the Lineham Creek Falls Trail down to the cascading waterfall over red rock is far more dramatic from the top than at the bottom.

Mount Lineham, now nearly clear of cloud, consumes the view to the right.

The red and green hues of Buchanan Ridge loom large on the hike through the grassy meadow along Ruby Ridge above Lineham Creek.

Within a very short window, from the grassy slope along Ruby Ridge, there is a spectacular, silhouette view to the south of 2,708 m (8,883 ft) Mount Custer, with the Herbst Glacier on its flank.

The powerful image brings back memories of the kayak adventure on Cameron Lake earlier in the day.

About midway across the grassy plain on the flank of Ruby Ridge a glance left reveals a deer watching me intently in close proximity from the shade of one of the few trees on Ruby Ridge.  A few moments are spent gazing at each other.

I talk.  Deer listens.  Then, as the hiking proceeds again, deer hikes nearby along with me.  When trail side shrubbery becomes deeper and the trail begins a more aggressive descent, deer veers higher on the ridge and we part ways.  The encounter is special.

Deer and I are able to briefly bond because our ears are the same size. 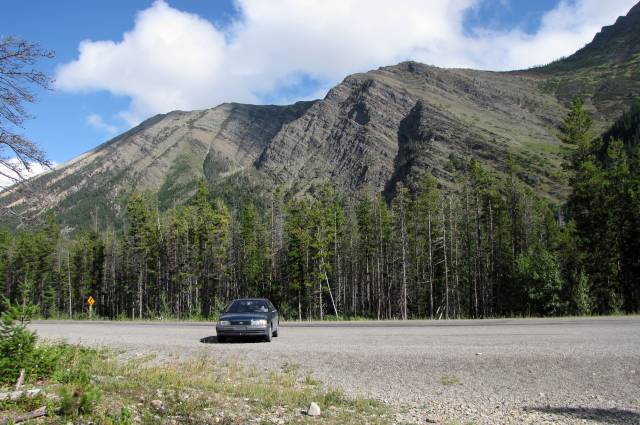 This long and fascinating day of visiting, kayaking and hiking in Waterton Lakes National Park ends with a scenic ride home under sun.

After cleaning up and changing clothes for dinner at Zum's Eatery, early to bed at the Bear Mountain Motel feels very good.