From Lower Rowe Lake, the hike to Lineham Ridge is a continuation which begins with the short 200 m (219 yard) return to the Rowe Lakes Trail, followed by a left turn at the main trail and a short 1.3 KM (¾ mile), very beautiful hike through lush forest over Rowe Creek water crossings.

Rowe Meadow is an easily achievable and worthy destination on its own.  Wow!

The first vision of Rowe Meadow brings back powerful memories of the initial visual impact of Cracker Lake. Stepping from the forest into the stunningly beautiful alpine meadow has the ability to simply stop a person in their tracks.  Wow!

On the far side of Rowe Meadow, a simple, square and narrow, wooden beam bridge crosses a marvel of running water, with moss-covered stones and surrounding wildflowers nothing short of spellbinding in a photographic paradise of peace and tranquility.

The trail junction is a very short distance beyond the rise on the far side of the creek.

After five minutes of heart-thumping and heavy breathing there occurs, without warning, an uncharacteristic lucid thought occurs.

The return hike to the junction turns onto 3.3 KM (2⅛ miles) of trail leading around the impressive bowl and up to Lineham Ridge.  The elevation gain will be greater but much gentler over the increased distance.

The 3.3 KM (2⅛ mile) hike to Lineham Ridge is longer than the Upper Rowe Lakes hike from the Rowe Meadow junction but the rate of ascent is gentler.

The front end is on steep, loose rock buffered by the beauty of surrounding wildflowers and the magnificent cliffs surrounding the bowl.

The Lineham Ridge trail beneath impressive cliffs, is a gentle ascent with phenomenal views from the circle hike around the bowl.

Rowe Meadow, at the bottom, serves as a fixed reference as altitude is consistently gained on the swing around towards the west face of Mount Lineham.

The trail is clear and easy to navigate in the transition from gravel and solid rock to scree.  How isolated plants can flourish in this hostile environment is beyond imagination.

On the approach to the top of Lineham Ridge, Upper Rowe Lakes begin to appear on the flank of Mount Rowe on the opposite side of the bowl. 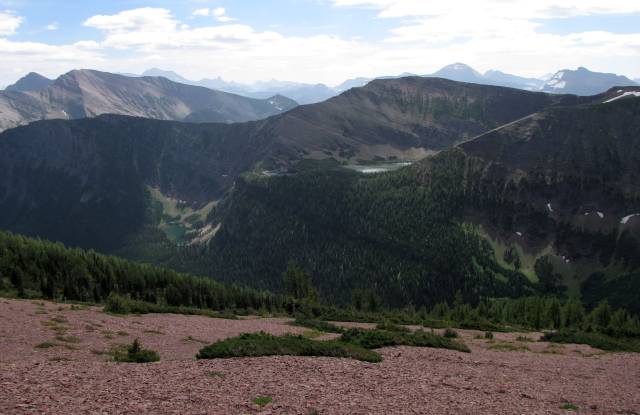 A long lens view of Lower Rowe Lake, with Upper Rowe Lakes above, as seen from near the top of Lineham Ridge on the opposite side of the bowl above Rowe Meadow.

As the Lineham Ridge trail arrives at the top, the hike proceeds past the severe direction reversal and continues straight towards the west face of Mount Lineham.

Within a very short distance, on the left, the incredible view, from the edge, of Lineham Lakes below begins to unfold and proceeds to exponentially assault the senses.

Breathtaking beauty!  Unreal color!  From the edge of 400 m (1,300 ft) of vertical air, it seems impossible to cease taking photographs within this emotionally powerful and visual extravaganza.  This vision alone makes the hike worthwhile.  Wow!

Hiking directly along the top of Lineham Ridge directly towards the west face of Mount Lineham.

The view to the left. No photograph can do this justice. You need to stand here.

After getting settled down for relaxation and enjoyment of a leisurely lunch with Lineham Lakes directly below me, steep cliffs plunge from the summit of Mount Lineham to the right, combines warm sun and a cool breeze on the back,as feet rest weightless at the end of legs dangling in space.

Mountain wilderness adventure simply does not get this grand very often.

Back at the severe direction reversal at Lineham Ridge Trail, veering right will proceed along the top of the ridge.

Views are compromised to the north because the trail is below the true top.  No doubt this is for protection from wind, and for safety since the north side of the ridge is an unforgiving drop.

On the approach to the high point at the northwest end of Lineham Ridge, the short scramble from the trail to the top of the ridge provides an excellent full view of the two most westerly Lineham Lakes.

Is there any doubt this area once rested under water thousands of years ago.

Top of the scramble to the edge of Lineham Ridge.

A view looking back along the top of Lineham Ridge from the top of the short scramble.

The view from the top of Lineham Ridge to the two west Lineham Lakes at the bottom of the bowl.

The view from the top of the ridge is spectacular in every direction, but the angle of the sun calls time to begin the return hike.

On the hike back along the top of Lineham Ridge, two other couples have arrived at the severe direction change.  There is no warning the ridge was going to get crowded like this.  One couple is from the United States, the other from Switzerland.

Pleasantries and intelligence are exchanged prior to parting in a variety of directions and distance.

Rowe Meadow does not seem to get much written attention.  This is one of many highlights on the hike from the Akamina Parkway to the top of Lineham Ridge.

On the approach to the meadow, a few minutes are allocated to appreciate the slopes consumed with brilliant wildflowers.  The mix of flora, rock and running water, combined with surrounding dramatic scenery, is magic.

The aroma and sound are palpable.  This is a very beautiful, sensually consuming place.

At the Rowe Meadow trail junction, the potential hike up to Upper Rowe Lakes is abandoned.

The view of the lakes from the top of Lineham Ridge will suffice this day.  Instead, extra time will be spent at Rowe Meadow to enjoy a snack, refresh the filtered water supply and take many photographs of the pristine beauty near the wooden beam bridge. 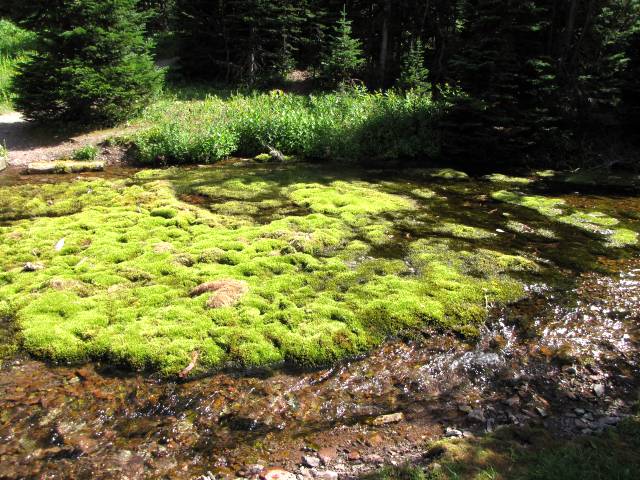 On the return hike - back at the trail junction to Lower Rowe Lake on the right. Straight ahead returns home.

Hiking east through the valley between Mount Rowe and Mount Lineham with the north end of Buchanan Ridge consuming the view ahead.

Deciding to tackle the Rowe Meadow hike might lead to a few hundred meters continuance on the Lineham Ridge hike for a bit of elevation, sloping meadows and amazing views.   Even footprints in the marsh land would be a travesty of wilderness etiquette in this pristine paradise.

To choose to continue to the top of Lineham Ridge will be tackling a return hike from the Akamina Parkway of about 17.6 KM (11 miles) and elevation gain in the range of 850 m (2,780 ft) so, a bit more aggressive.  There is always the option to go as far as chosen and turn about when you have had all the fun you can stand.

Happy trails.  Thanks for sharing the adventure.  This magnificent hike has been the reason for another grand hiking day.