Michael's Creek is an excellent hike or bike to the east end of Glenbow Ranch Provincial Park.

Bow River ice jams in the Narrows of east Glenbow Ranch Provincial Park have cleared and the trail past old Glenbow Quarry is open.  The paved path to Michael's Creek is an excellent bicycle ride.

From the parking area, an easy downhill ride past the Park Office on Glenbow Trail, left passes the old Glenbow Store, turns right at the Corral and over the Canadian Pacific Railway line to a final left turn east on Glenbow Trail.

Quickly the trail descends gently to just above river level on paved path.  Glenbow Trail is an excellent, scenic ride which can also be done on foot to allow more time for discovery and observation. 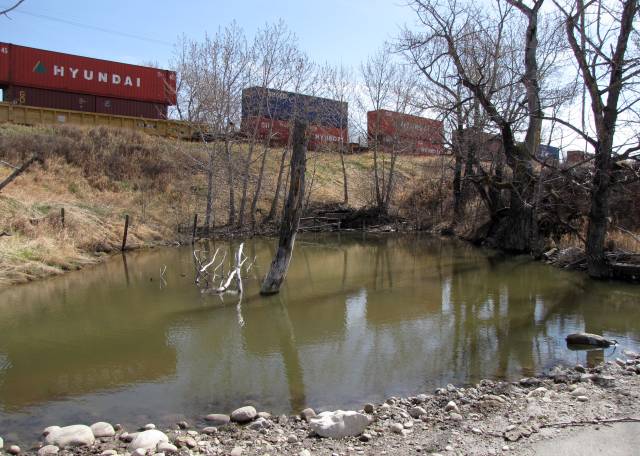 Michael's Creek is channeled beneath the rail line and the pathway on its journey to merge with the Bow River.

At the east side of the pond, there is an interesting collection of castaways from bygone years.

At the end of the paved, navigable trail a frustrating fence prevents further progress.  Eventually this trail will be a complete link to Haskayne Park in Calgary.  That will be one sweet ride which will encourage travel to Glenbow Ranch Provincial Park.

At current trail end resides one of the area's original ranches, Bearspaw Ranch.

The view east, from the Michael's Creek kiosk, to the Bearspaw Trail linking to Calgary, Alberta

Glenbow Ranch Provincial Park becomes substantially smaller on a bicycle and there is time to explore additional trails on the west side of the park towards Cochrane to enjoy some fine mountain views on this clear day.

A ride across the park provides nostalgic views on ride west, first on Glenbow Trail, then on Bowbend Trail, to the Waverley Chimney.

Lots of rail traffic this day

The Glenbow Sandstone Quarry from the east.

A long lens view of the old quarry complex from Glenbow Trail.

The view across the pond to Tiger Lily Loop and the Park Office above. 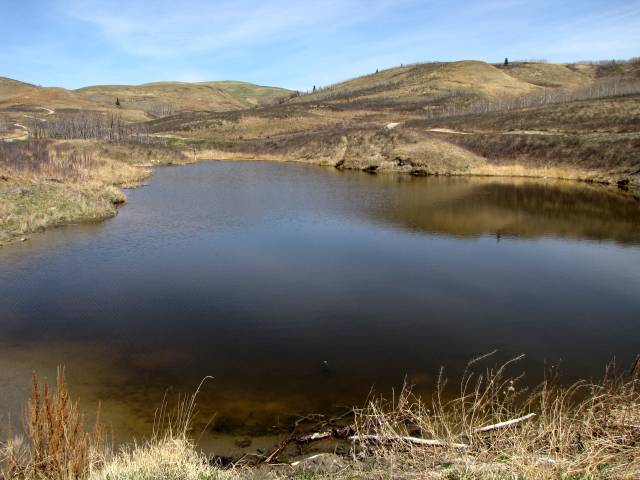 Following a brief ride west on good granular pathway which leads to Cochrane and Eagle Ridge,  cycling proceeds up the entire hill with the exception of two brief stops for photos and heart medication along the way.

A view west over grassland and South Cochrane industrial to the snow-capped mountains beyond.

Arrival at the top of the hill occurs mere moments prior to experiencing a potentially fatal seizure.  The event is more an age and early season conditioning situation than the difficulty of the hill which is actually well graded.

There are sweeping views across the Bow River Valley and over Cochrane to the Rocky Mountains.  A new trail has been created at the top of the hill to link Eagle Ridge to Windmill Lookout. 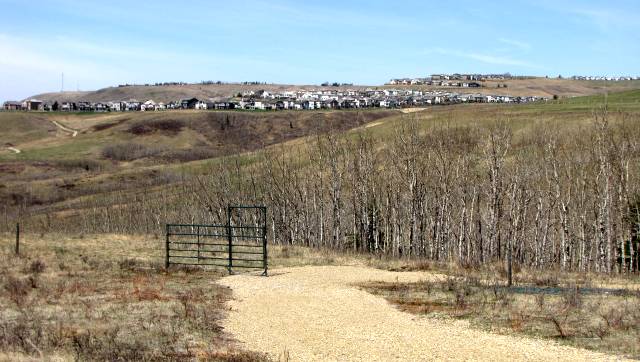 Descent occurs on the steep,  granular pathway through Badger Bowl, with brakes engaged, then a cycle east on Bowbend Trail, then Glenbow Trail to capture a few images of the old Glenbow Store before proceeding up the hill past the Park Office to the parking area.

From the parking area there is a long lens look at an old structure to the east and the area of Glenbow Ranch to the Narrows and Michael's Creek in the east. 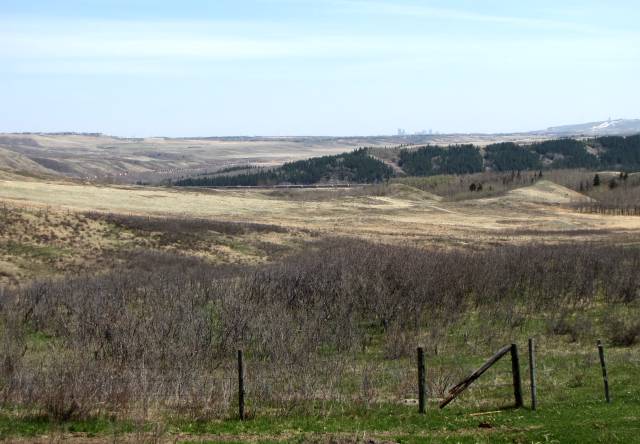 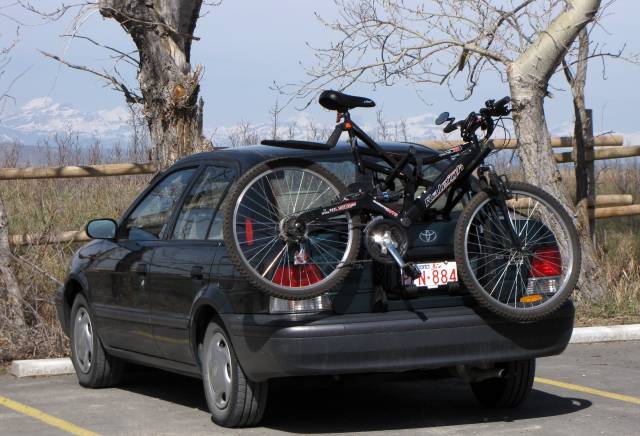