Clearly, snow-laden mountain ranges west of Cochrane are visible this day under sunny skies and the telephoto lens compresses their 60 KM (38 mile) distance and draws them closer to the grassland foothills in Glenbow Ranch Provincial Park.

The hike from the parking area passes the Park Visitor Centre to gracefully descend into the valley on Glenbow Trail paved path.  There is a good visual of the Calgary City's skyline and the white patch and ski jump towers of Canada Olympic Park. 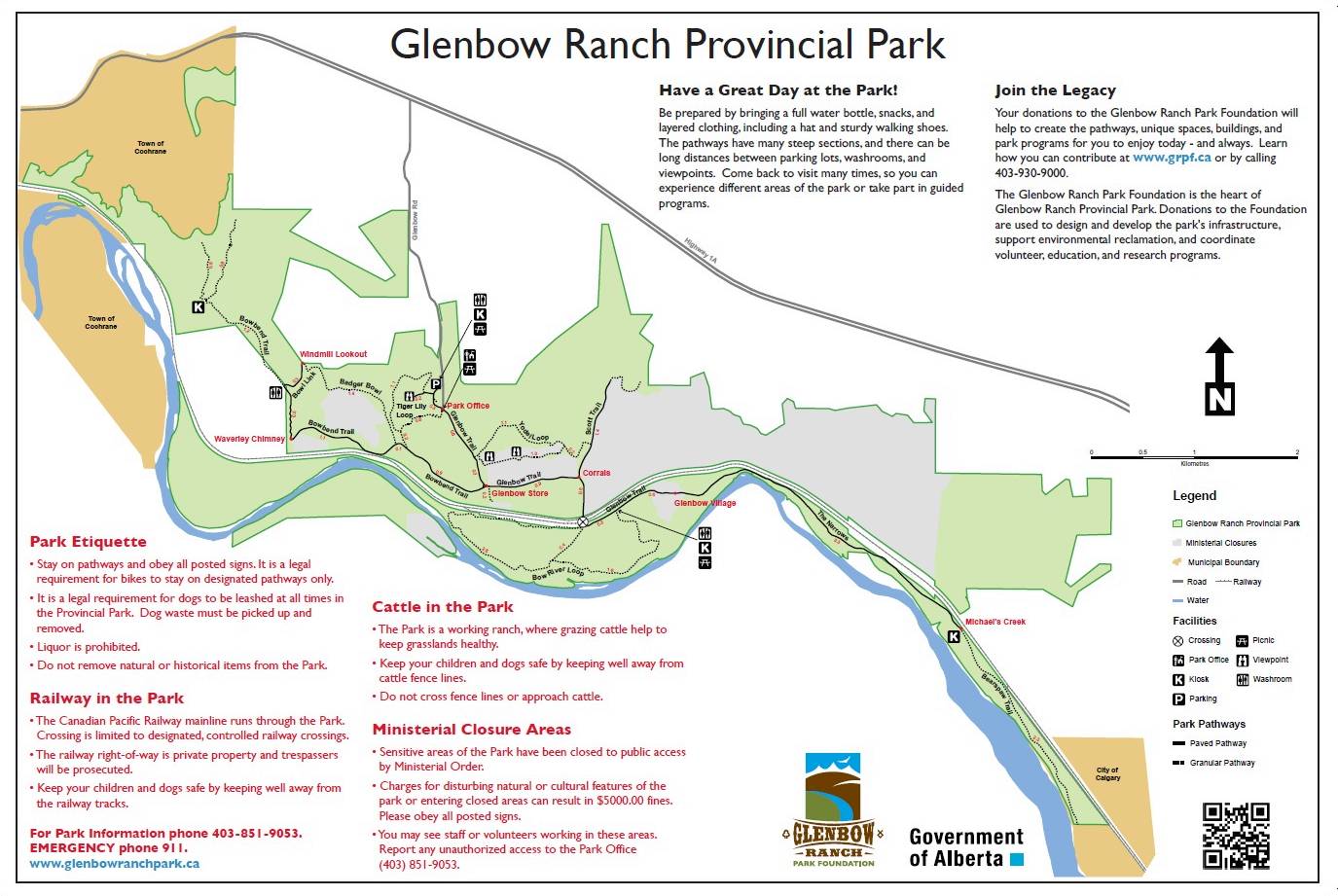 Today, a left from Glenbow Trail takes the hike east along the north side of the Yodel Loop Trail.

Winter scenery has unique features on this relatively level trail in a coulee surrounded by grassland hills and patches of forest where limited water collects.  The nature of this land will make each season a uniquely beautiful and different experience.

Trees rising from a partially iced creek create parallel shadows across the path as the Yodel Loop trail winds its way alongside to an inevitable creek crossing near the initial objective at the junction of Scott Trail.

At the creek crossing there is a bit of trail erosion and shallow, running water shows off unique ice formations created by overnight freezing.

At the junction a short distance past Yodel Loop, a turn left begins the climb north up paved path on Scott Trail.

The view extends across the Bow River, west over Glenbow Ranch Provincial Park to the mountains and the inhabited, heritage Hertford Home slightly above.

Further along, past historic Hertford Ranch, the paved trail ends and a gravel road winds right, around and up to sweeping views of surrounding landscape.

The road ends at gated private property with a typical prairie view of old sheds on prairie grassland. 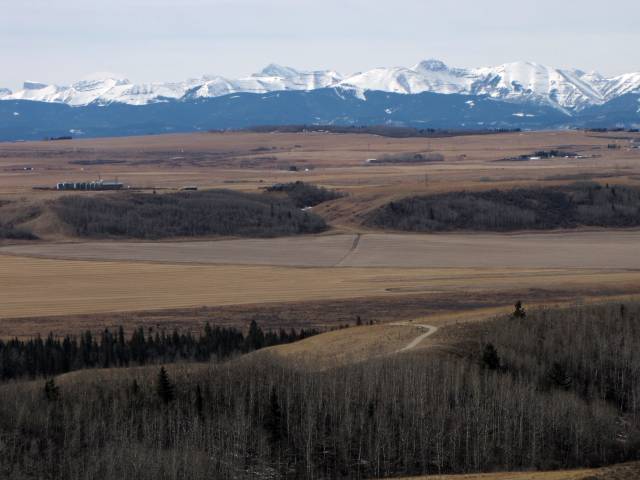 Old sheds from the gate at the top of the gravel road extension on Scott Trail.  This view epitomizes prairie grassland.

The Bow River, Calgary skyline, and Calgary Olympic Park from near the top of Scott Trail

There are mysteries visible in Glenbow Ranch Provincial Park.  The inner child wants to get off-trail and explore them but they are fenced off as Ministerial Closures with significant financial penalty for non-compliance so my exploration is limited to the range of my camera lens.

Perhaps these areas will be developed further as the park matures.

Descent of Scott Trail passes the Corrals at the junction with Glenbow Trail and continues south to cross the Canadian Pacific Railway controlled crossing on Glenbow Trail to hike east on paved Glenbow Trail past old Glenbow Village, and the Quarry with the intention to continue through the Narrows along the Bow River to Michael's Creek.

On Ministerial Closure lands there is an area separated by fence which serves as a Foothills Fescue Research Institute, and, on the opposite side, an interpretive plaque which identifies the location of the old Glenbow School.  There is a depression in the ground where the school once stood.

On the other side of the Canadian Pacific Railway controlled crossing the hike heads along the east side of the Bow River Loop but a separate post on this section will divide the photographs.

Continuing east, there is a gradually sloping descent from the plateau above the Bow River to near water level on the hike east towards the Quarry where sandstone was extracted in the early 1900s to aid in the construction of the Calgary's original Land Titles Office and Courthouse as well as portions of  the Alberta Legislative and Government House in Edmonton, Alberta.

What remains of the old Quarry sits about two-thirds of the way up the slope on the treed, off-limit terrace.

The Glenbow Trail is closed just east of the Quarry due to spring flooding.

This is common when spring ice can dam and divert the river onto higher ground.  The visit through The Narrows and on to Michael's Creek must wait for another day when I can return for spring color on a bicycle tour.

The viewpoint just east of the Quarry at the trail closure

On the return, there are excellent views of ice platforms perched on top of sand bars in the Bow River.

Calgary Olympic Park is visibly nearby.  The west side of the figure-eight Bow River Loop must be hiked prior to ascending Glenbow Trail past the Glenbow Ranch Visitor Centre to the parking area.

This thoroughly satisfying day has consumed just over 17 KMs (10⅝ miles) on primarily flat trail with occasional, gentle elevation under sunny skies.  The Bow River Loop will be covered in a subsequent post.

The elevated opinion of Glenbow Ranch Provincial Park has not changed.